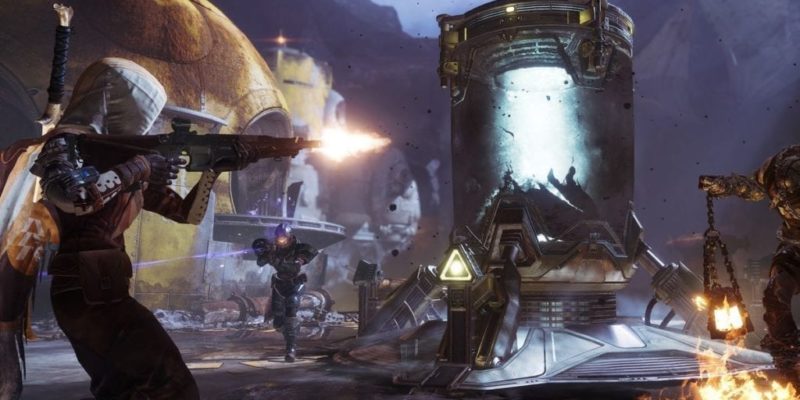 The Forsaken expansion for Destiny 2 won’t be out until September, but fans are pumped for what the future offering holds. One such reason is that of Gambit, Destiny 2’s first ever PvPvE mode. Think of a small-scale version World of Warcraft’s Strand of the Ancients or Alteract Valley Battlegrounds. You have players facing off against NPCs as well as human opponents from the other team looking to wreak havoc. Our friends at Game Informer have obtained an exclusive look at one of Gambit’s maps — Legion’s Folly.

The object of Gambit — killing a boss NPC — means that opposing teams will shoot and traverse the alien environment of Nessus taking down mobs. Once enough mobs are dead, your team can spawn a “Blocker,” a large mini-boss that distracts and annoys your opponents. Should you gather 25 motes from these enemy NPCs, you can send a teammate to “invade” your opponents’ frontlines. This means they’ll be able to rain death on hapless Guardians while those players are busy fighting off waves of mobs.

The Legion’s Folly Gambit map takes place in Nessus where you’re up against Fallen and Cabal. It features a vantage point for invaders where they have a clear line of sight on their opponents. It also has a “Milk” front, an area of the map surrounded by Vex bio-residue affectionately known as “Vex milk.” There’s also a Vex teleporter which places Guardians in a more hidden nook, able to surprise their foes.

Bungie’s artists Coolie Calihan and Todd Juno hope that players will enjoy the unique style of play that Gambit brings. This would be a departure from the tried-and-tested formula of Destiny’s PvE exploration and PvP in Crucible. At the same time, it will also be a mix of both and it looks as though it would be utter chaos.

Destiny 2’s Forsaken expansion releases on September 4. PC Invasion will definitely provide you more updates as we get closer to the date. Oh, and we definitely can’t wait to tell our teammates to watch out for “milk.”