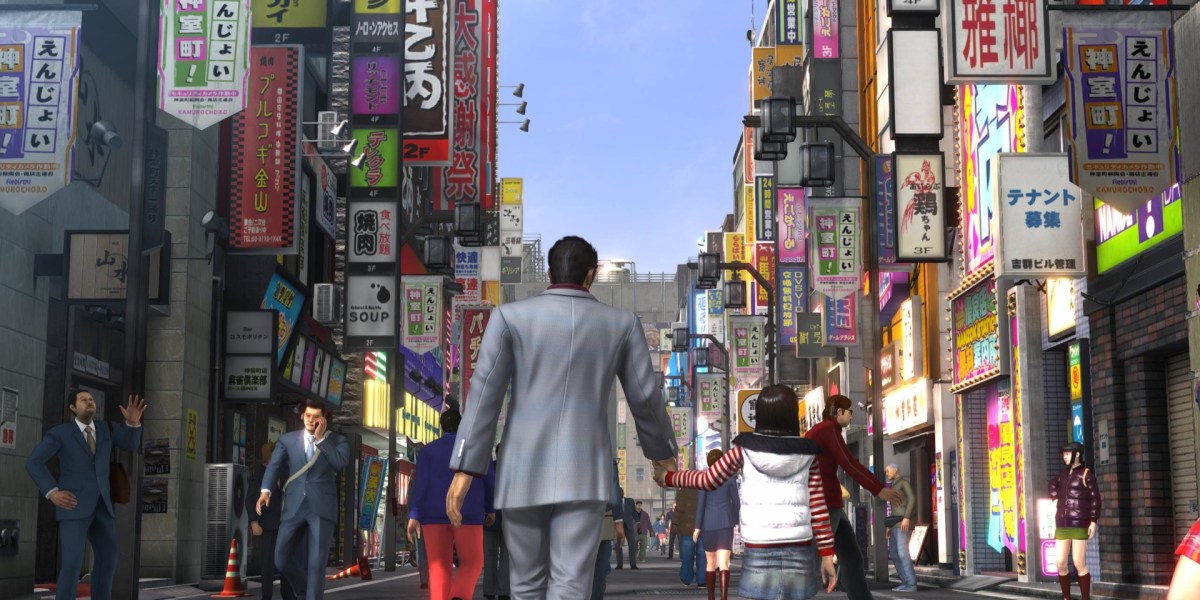 We’re nearly there, everyone. With today’s release of The Yakuza Remastered Collection on PC, we’re only missing Yakuza 6: The Song of Life (coming in March) before we have every Kazuma Kiryu Yakuza game on PC. After that we just need to hold out for Judgment and Lost Paradise, and then, if we’re very good people, we may someday get the Japan-only spin-offs Kenzan and Ishin. And maybe the Kurohyou game?

I’d be kind of okay with us not getting a re-release of Dead Souls, though. That was pants.

Anyway, enough about the letters I’ve been sending Santa for years. Today we’re here to talk about Yakuza 3, Yakuza 4, and Yakuza 5. I’m not going to talk about the tech side of things too much because I’ve done that in our shiny tech review already. Suffice to say it’s a workable upgrade, but these are PlayStation 3-era games and they very much feel like it. With the Yakuza Remastered Collection only remastering them (the hint is in the name) rather than outright remaking them as with the Kiwami titles, there’s only so much that’s been done.

So instead, I’m going to talk a little bit about each of the games individually, and give you an idea of what you’re in for.

Yakuza 3 is probably going to be the most divisive of The Yakuza Remastered Collection trio here. Honestly, it’s one of my favorites, at least in part for nostalgic reasons. This was the first Yakuza game I really got into, and it kickstarted my love for this franchise. And there’s a lot to love here, even if — like me — you wound up diving into the deep end and being beaten over the head with unfamiliar characters and plot references.

The storyline and villain are both superb, and the sedentary pace of the early game actually works in its favor. At the start of Yakuza 3, Kiryu has retired from the yakuza life (again) and is now running an orphanage in Okinawa. Naturally, events conspire to pull him back into the murky Japanese underworld (again), but the early sections highlighting his peaceful life and the beautiful Okinawan scenery do wonders for establishing character and location, particularly when you make the inevitable return to Kamurocho and see the stark contrast. 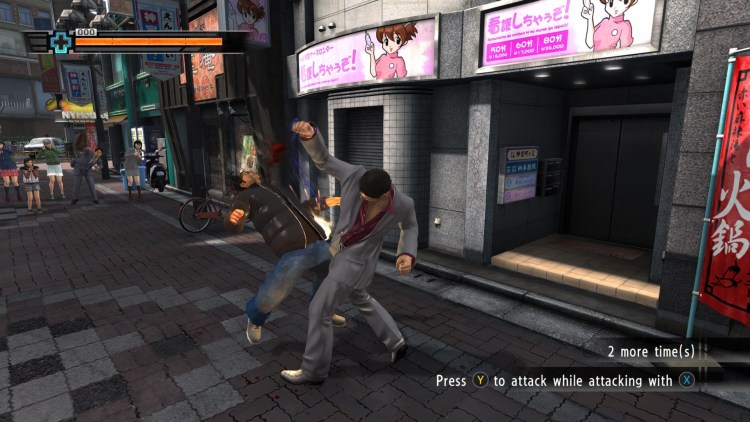 The downsides all come on the mechanical front. With Kiwami and Kiwami 2 supplanting the first two Yakuza games, this is now the “oldest” of the series, and it feels like it. Combat is clunky, and holy shit you will need to get used to blocking. And breaking blocks. All the time. Even back when this first launched it felt a bit like a PS2 game that had been pushed onto the PS3, and now it feels positively ancient when compared to any of the games that aren’t in the Yakuza Remastered Collection.

Don’t get me wrong; I still love Yakuza 3. But to get the most out of it you’ll want to have played the preceding games first, and after the polish of those titles, this is a really jarring trip back to the past.

Yakuza 4 was the point where the series started to mix things up a bit. Mostly, it was probably because “Kiryu retires from the yakuza life and events conspire to pull him back into the murky Japanese underworld” was getting a bit long in the tooth as a plot hook.

In its place, Yakuza 4 gives us four protagonists. We start off as Shun Akiyama, a suave but shady loan shark with a heart of gold and some very strange business practices, and is probably one of the best characters in the entire series. We then move onto Taiga Saejima, a convicted death row felon. Next up is Masayoshi Tanimura, a corrupt cop (with a heart of gold, of course). And then, finally, we’re onto Kazuma Kiryu, who has retired from the yakuza life to run his Okinawan orphanage… but events have conspired to pull him back into the murky Japanese underworld. Yeah, no, the developer isn’t dropping that one any time soon. 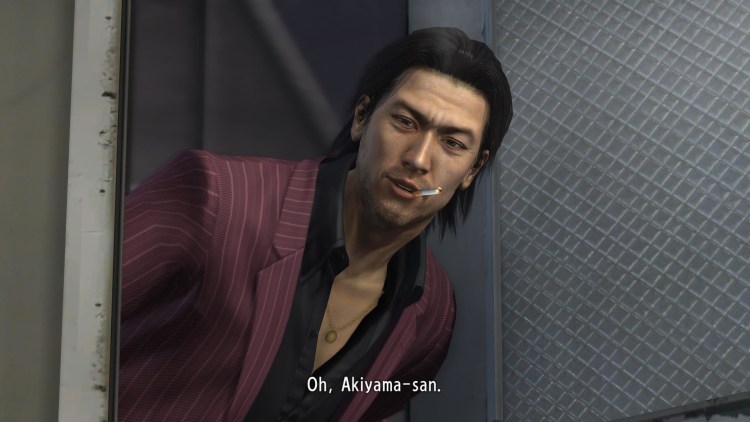 It’s a wide-ranging plot. Every character has their unique take on the events, and it’s fascinating seeing the disparate threads that each character follows slowly weave together as the game nears its climax. The combat and leveling are improved over Yakuza 3 too, and the substories have also seen a vast improvement. The problem is that this is the game where bloat started to creep in.

Four protagonists means four different fighting styles, which is a sharp little upgrade. The downside is that if you don’t click with one of those fighting styles, then tough shit. Likewise, four protagonists also means that Yakuza 4 doesn’t have a great deal of time to develop any of them, and some of them wind up feeling like they’re just tagging along, held captive to the greater story.

Yakuza 5, however, is the one where the bloat really started to hit home. We’ve once again got four (well, five-ish) characters. We’ve once again got Kiryu retiring, this time to become a taxi driver and blah blah conspire blah blah pulled back blah blah Japanese underworld. And we’ve also got a shitload of minigames, including Sega arcade machines for Virtua Fighter 2 and Taiko no Tatsujin. 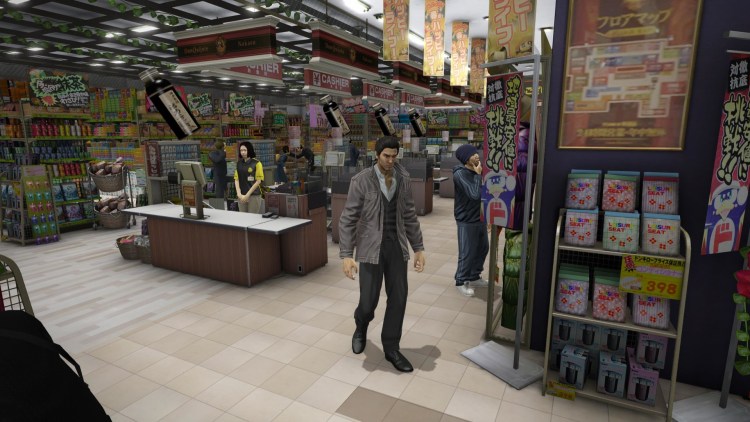 The exciting life of an ex-yakuza: go to the supermarket!

Where the bloat makes this wobble and eventually fall of the rails a bit is how shoehorned in a lot of this is into the actual core gameplay. Do you want your Yakuza game to randomly become a janky hunting simulator? No? Tough! And you’re also going to do lengthy rhythm-action battles as Kiryu’s ward, Haruka Sawamura, tries to becomes an idol. The game is also really, really long, and the new character, ex-baseball pro Tatsuo Shinada, could almost have been cut entirely. 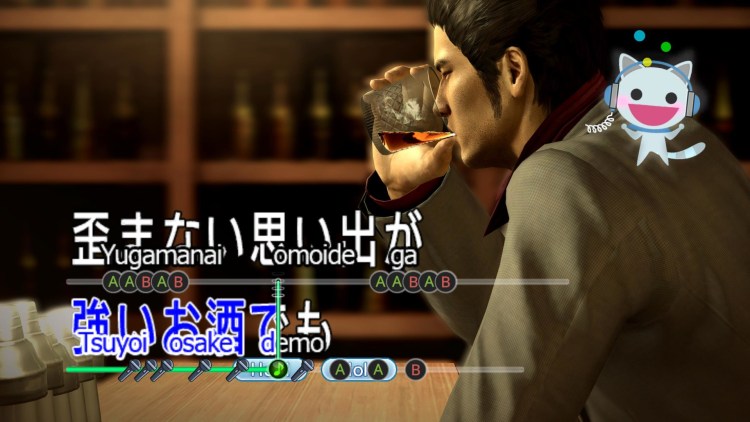 And then sing Baka Mitai, because everyone loves memes.

This is probably one of my least favorites of the main series Yakuza games, simply because of just how bloated it is. And that’s a shame, because it’s got a lot going for it. Once again, the combat has been pushed forward a few steps, and the plotline is emotional and heart-wrenching in all the right ways; in that sense, it’s arguably better than Yakuza 4.

It’s a must-play game if you want to go into Yakuza 6 (which you really should) because that’s pretty much a direct sequel to this game and not just a pseudo-sequel with a few callbacks. But if you weren’t already fatigued by the time you got done with Yakuza 4, then this one’s likely to push you over the brink. All I can say is I’m thankful that the final Kiryu game decided to focus solely on one character again.

In terms of value for money, it’s almost impossible to fault The Yakuza Remastered Collection. You’re getting three games that can easily occupy you for 60-80 hours apiece if you delve into the side content.

On the other hand, you probably want to space them out a bit, and you need to understand that there’s some seriously dated stuff in here. While Yakuza 3 was comically brutal at the time, it feels a tad toothless when compared to 0 or Like a Dragon, and substories have only improved since then. While each game in the Remastered Collection makes a few strides forward, they’ve all got their own little flaws before the series regained its focus with 0 (the next game, in release order) and then 6. 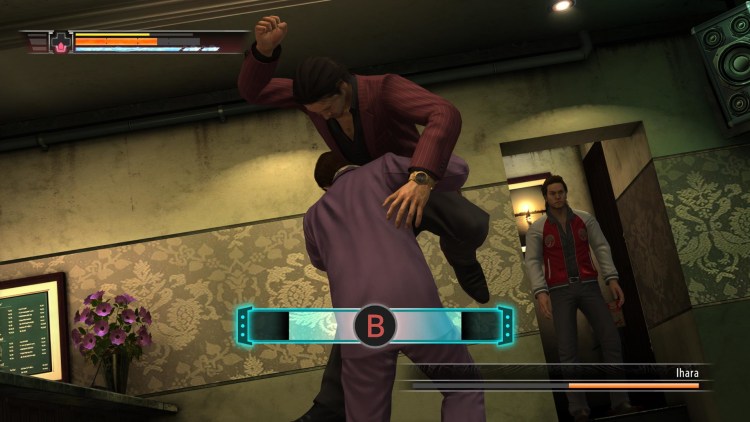 Press B to purchase.

If you want to follow and finish the Dragon of Dojima’s story arc, the collection is an absolute must-play. But be warned that — whether in bloat, in plot, or in mechanics — these are now pretty much the three weakest games in the series when compared to 0, the Kiwami games, or Like a Dragon.

This trio of games still creak a bit even with this fresh coat of paint and support for both higher resolutions and 60 fps gameplay, but they're still easily worth a play, particularly at this bargain bundle price.

Roger Craig Smith steps down as the voice of Sonic

Monstrum 2 — Is this asymmetrical horror game worth it?