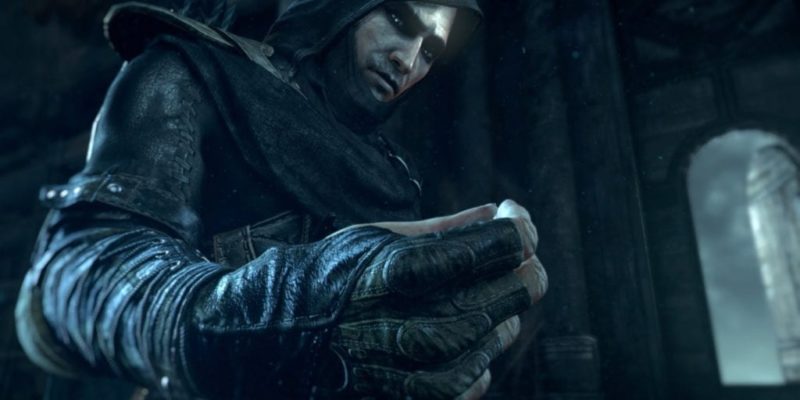 Deadly Shadows is also the inspiration for Thief’s central City hub, in which Garrett can skulk down side-alleys and across roof-tops to reach his next mission destination, complete short side-quests or just hunt around unprotected bedrooms for loot items. The latter tends to involve jimmying windows open with some boring button mashing, hunting through drawers and performing a lockpicking mini-game to reach more valuable trinkets. While not the greatest mini-game, it can lead to moments of proper stealth tension. Either because a guard is about to return to the scene, or because you know that screwing up will make a noise that can alert people. 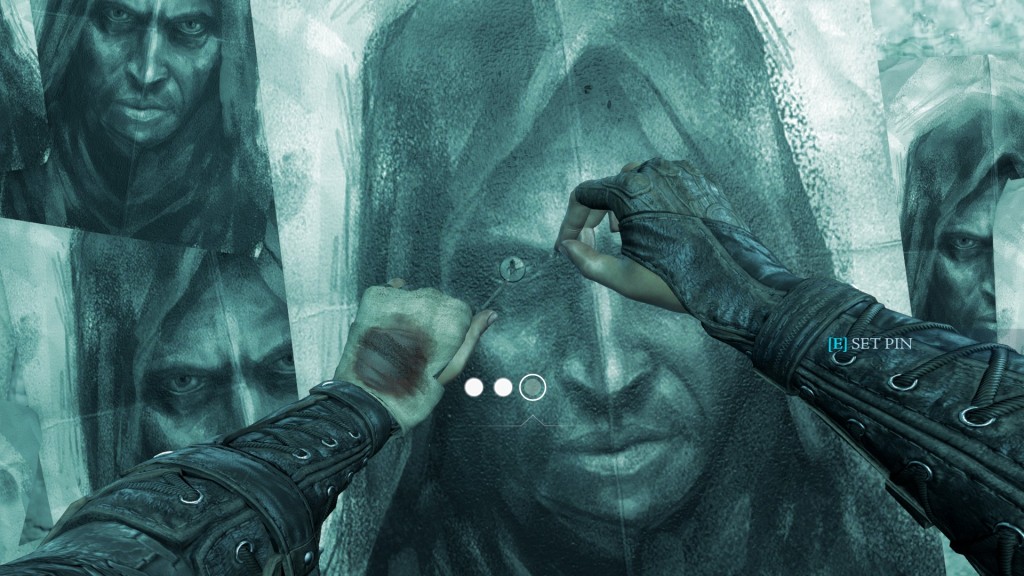 Stealing the very light from my own eyes.

The City hub occupies a large area and provides further tantalising glimpses of half-decent Thief levels through secondary quests and creative interiors (though one of the best ones, the bank, was cruelly restricted to pre-orders.) But it lacks the flavour of the prior games’ Hammerite and Pagan factions and is populated only by patrolling guards and a handful of blank-eyed NPCs who will barely react to your presence. It’s also punctuated by endless loading zones and constructed in such a way that, once again, there tends to only be a few, designer-approved ways to reach your destination.

This is a symptom of the new context-sensitive jumping/action system: a solution in search of a problem. In previous Thief titles, Garrett could jump about as he pleased (sometimes as an intentional method of alerting guards) and interact with stackable items like crates to reach goals in unlikely ways. Now, he can only jump at pre-designated moments. This prevents the City hub from reaching its potential as a large playground like area and reduces it to a type of puzzle game where you have to spot the places the developers will allow you to put rope arrows.

While the older Thief games admittedly turned ladder navigation into a special type of hell, this new system has major issues of its own. The inconsistency in where Garrett is allowed and able to jump can lead to him blundering into trouble just as often as the previous titles, and can often leave him in a position where he should clearly be able to grab a dangling rope or crate-top but the game won’t let him. Most ridiculous of all, it creates situations where he’s unable to hop over a simple pressure plate trap because his feet are mysteriously glued to the ground.

Looking Glass Studios baked fantastic sound propagation into their Dark Engine for Thief: The Dark Project (and later Thief II,) because they knew that sending dependable aural information to the player is crucial to a stealth game. While this Thief just about manages to convey the visual side of stealth (shadows are good, lights are bad,) the sound design is all over the place.

Ambient conversations and guard chats will sometimes sound as though they’re taking place right by you, when in fact they’re either behind walls, below you, or some distance away. Meanwhile, dialogues taking place in the open air will sometimes have a muffled “I’m behind a wall right now” effect on them. During an early brothel-based mission, one man’s amorous preferences followed me around through several solid surfaces. Just as entertaining, cut-scenes that take place in areas populated by NPCs are often punctuated by their scripted barks. A couple of missions feature lightning flashes but no thunder. And don’t think you can rely on the subtitles, because these often miss lines of ambient dialogue and at one point went completely out of sync with cut-scene.

The more glitchy audio errors can be shrugged off or laughed at, but for a Thief game to be released with misfiring sound propagation is a disaster.

Different floor surfaces do at least still make different noises when you walk across them, but aside from crossing running water and trampling over the liberal scatterings of broken glass that cover some of the levels the AI seems more bothered by proximity than whatever surface Garrett is crossing. Caged birds and dogs (quite why the dogs are never allowed out of the cages is a sad mystery) will also alert guards to your position. The addition of precarious objects like vases and brooms is a welcome one too, encouraging some extra spacial awareness to prevent things clattering over.

The AI doesn’t do anything spectacular, but it’s fairly predictable (in a positive sense) and follows the kind of rules you’d expect from a stealth title. Guards will follow basic patrol routes and react to loud sounds, open doors, extinguished torches and other obvious signs that something isn’t quite right. They’re able to re-light any flame-based sources, but it’s worth noting that I’ve never seen one operate a light switch. Patrol routes sometimes seem to just break, leaving guards standing in place (which can be either helpful or awkward, depending where it happens) and sometimes they become afflicted by a bizarre Jacob’s Ladder style spasm.

For the most part though, the AI does its basic job and forces the player to avoid direct confrontation or conflict. Picking people off with arrows is still a viable tactic, as it was in the original games, but attracting the up-front attention of more than a lone guard will most likely result in death unless you retreat and lose your pursuers. Eidos’ addition of a “swoop” ability to dart quickly between points actually proves to be quite useful and entertaining, if a little over-powered in terms of trivialising certain sections.

It’s one of few highlights in a Thief reboot that doesn’t come close to touching the kind of craft found in the mission design of the earlier titles. The warren-like City hub and its myriad of side-missions come closest to presenting a re-invented version of Thief in a positive light, but even this area is blighted by too many loading zones and traversal which is restricted by a system of context-sensitive movement. Whenever any of the primary story missions open with an indication that the design team knew how to put together an interesting building, you can guarantee some scripted corridor idiocy will be lurking right around the corner.

Games like Thief: The Dark Project, System Shock 2 and the original Deus Ex appeared to give us glimpses of a future where player agency could be paramount in first-person titles, but that promise has ended up being realised by a precious few.

This game cannot count itself among them. Even in its efforts to just be a functional stealth game Thief is let down by awful sound design, too many uninspiring mission layouts, and a plot which looks every bit the work of fragmented teams over the course of several turbulent years. It might be a passable experience for some, but for those of us who’ve seen and played much better, Thief is a tragic missed opportunity and a categorical failure.

The Amazing Spider-Man 2 has some DLC spidey suits