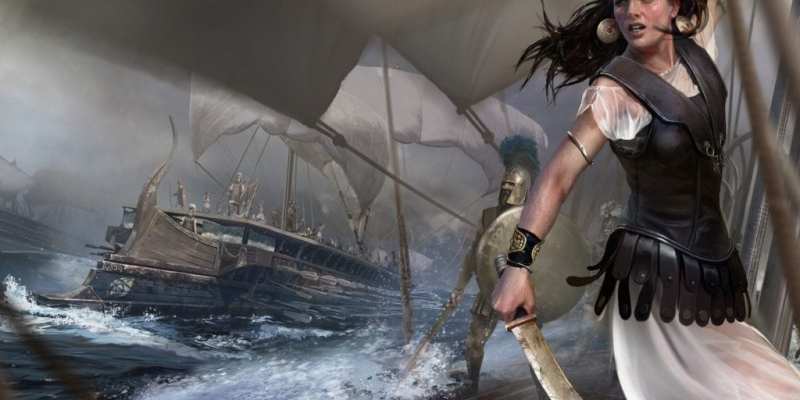 The question has been asked before: “How far will you go for Rome?” But it bears mentioning that perhaps an even more important question would suffice today: “How far will you go for outrage culture?” The answer would be “quite far, actually” if we take a look at the recent drama in Total War: Rome 2 which involves female generals, review bombing, and a poor response from a Creative Assembly Community Manager. Let’s examine why this entire thing is hilariously bad. 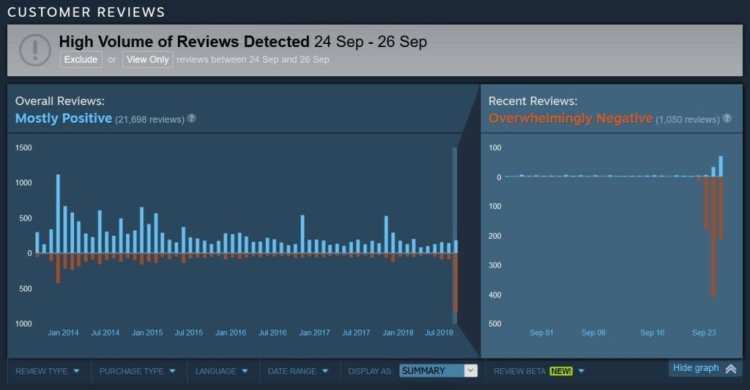 For starters, you’ll notice that the review-bombing on Steam happened over the course of the weekend. A ton of negative reviews popped up mostly pointing fingers at Creative Assembly due to the inclusion of female generals. That was taken as an affront to historical purists who preferred accuracy over Creative Assembly’s “agenda” (note the quotation marks).

The reason that’s hilariously bad is due to the timeframe. The high volume of reviews occurred very recently. This is in spite of the Desert Kingdoms DLC/update, which added female generals, being out since March.

So what were these players actually reacting to nowadays? 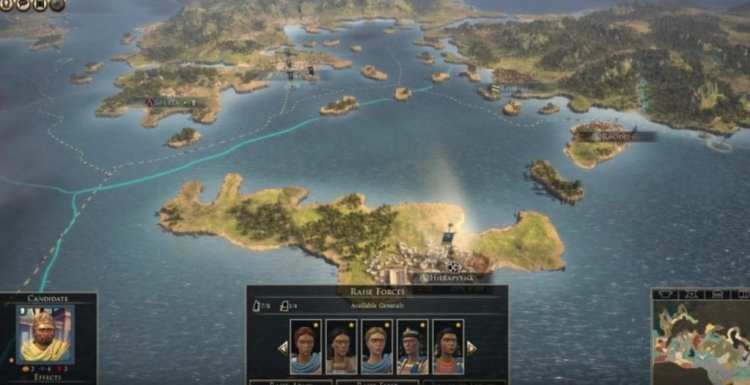 One particular screenshot surfaced and has been making the rounds, being linked to by various recent reviews. That comes from Steam user Erick who apparently ended up with Classical Egypt’s rendition of the Spice Girls. In that particular playthrough, Erick ended up with only female generals to choose from. Among Erick’s notable responses were:

@Hehaho15, could have? Maybe aliens visited Egypt. There are some hieroglyphics that some interpret that way. We should have alien generals. Not sure what “textbooks” you are reading but I suspect they are more about political indoctrination than teaching actual history.

Bear in mind, that screenshot was originally posted on August 10 before being linked to by various recent reviews. Erick also chimed in a Steam discussion to add:

It’s nice you do not care about a “historical” game being accurate. Lets just give them machine guns. I bet that would sell in a DLC. It’s amazing how facts are so offensive today. It is even considered hate speech by some. Nope i’m just a sexist for believing facts.

There’s just one problem as pointed out by Steam user Neelot:

Also you made that screenshot after patch 20 came out and passed enough turns to have a sizeble family tree, meaning that you have plenty of female characters in your family and you’re playing as Egypt that as far as I’m concerned does not restrict which characters you can recruit as long as they are adult.

What this means is that by the time Erick actually took the screenshot, enough turns had passed for him to have a sizeable family tree with a majority of his characters being females. Whether he manually cultivated that result or it’s just some RNG magic is anyone’s guess.

The Terrible Reply from the Community Manager

Another kicker comes in the form of Creative Assembly staff member/community manager Ella who posted the above reply in the same thread. The topic was originally posted on March 9 and has since devolved into arguments about sexism, gender roles, and some namecalling between. CA’s Ella decided to shut down the topic since it was going nowhere.

No matter which way you look at it, Ella’s reply was in poor taste given that it did nothing to assuage anyone’s concerns. Had the reply ended at “you can mod them out,” it would’ve still remained fairly acceptable. However, adding the “just not play” part definitely caused the already agitated players to become more outraged. It’s akin to telling people: “Don’t like it, tough luck. We ain’t gonna do anything about it so you might as well pack your bags.”

Yes, that is one hilariously bad reply from a community manager.

As with anything on the internet, anything you say can lead to something else entirely. Remember the bans that have been issued? According to other users, bans were handed out for those who publicly stated that they would pirate the game. That’s pretty much a no-no when it comes to Steam’s rules. Unfortunately, because this was a hot topic, some players who left negative reviews did so because they thought bans were being handed out for “speaking your mind.” Yes, for some reason people equated that response with draconian measures against any form of criticism.

Perhaps the most informative piece of news comes from YouTuber Republic of Play — former Creative Assembly staffer Darren. He mentions how rare it would have been to see a pool of all-female characters. He also cited how certain reviews came from people who haven’t even played the game in recent weeks. This meant that there were players who were just reacting “for the sake of” without really knowing if something affected them in-game.

Darren also mentioned the recent backlash against EA Dice with Battlefield V in relation to Ella’s response. That Battlefield V fiasco came from Patrick Soderland’s remarks in an interview with Gamasutra:

We stand up for the cause, because I think those people who don’t understand it, well, you have two choices: either accept it or don’t buy the game. I’m fine with either or. It’s just not ok.

In an age of limited-character tweets and attention-grabbing headlines, Soderland’s entire interview was summarized as: “Don’t like it, don’t buy it.”

Outrage spilling over is nothing new. Last year, Star Wars: Battlefront 2 — another EA game — was mired in the loot box controversy. The outrage over that spilled over to other games such as Destiny 2, Rocket League, Overwatch, and many others. Games which had microtransactions were suddenly compared to Battlefront 2’s “money-grubbing” strategy. The gamer reaction to Creative Assembly’s response mirrors that of what happened with Soderland and Battlefield V — and by extension, Battlefront 2’s as well.

Darren also called out Arch Warhammer, a popular Total War YouTube personality with 160,000 subscribers. That’s because Arch’s video titled: “Creative Assembly don’t want you to play their games” is about as sensationalist as it gets. And yes, that’s him reacting to something that happened a month ago just like everyone else.

The reason it’s hilariously bad drama is fairly simple. It’s because the reactions people have today are from images and instances that happened over a month ago.

A good comparison would be finding out a month later that your best friend’s puppy got ran over. You immediately message them to say how sorry you felt. But you don’t stop there — you tell everyone on Facebook about it and go door-to-door sharing your anger. Finally, you hunt down the culprit to demand an apology. Only later do you realize that the puppy was okay and only suffered a sprained ankle.

This is as reactionary as it gets. It’s, even more, telling because people are getting agitated at something now when no one initially batted an eye. To show you how people are late to the party here’s former games journalist Ian Miles Cheong who tweeted the following:

Cheong is actually reacting to female gladiatrices in Total War: Rome 2. They were introduced in the Daughters of Mars unit pack… in August 2014. If we’re to believe that idea, it would mean that Creative Assembly has some elaborate agenda to push going back as far as their 2014 DLC. In wrestling terms that would be long-term booking.

As you can see above, Creative Assembly dished out a response to address the entire fiasco. It falls in line with what Republic of Play and many other users have previously figured out. With the new mechanics, there will be additional chances to see female generals leading armies. But this is only possible for a select few factions. There is no actual bug or hidden patch change to speak of.

You could actually play a Total War: Rome 2 campaign right now and see for yourself. Barring Kush, every faction that allows female generals will not have that many in your officer pool unless you do something drastic during your playthrough. Of course, that will not stop random users on the internet from making up stuff on the fly. One such Twitter user, Kaio Hyzel, followed up with a diatribe below not knowing that Sparta (and the Greek States) don’t even get female generals in the game.

Then you will lose fans simple as, there were no female warriors or generals in Sparta. You fucked up the Warhammer content and now this, your trying to get female players but in the process, bring unauthentic experience that is upsetting your customers that been buying for years

Out-of-context screenshots, a bad reply from a community manager, YouTube rants, and generic outrage culture on the internet spurred on a very eventful weekend for Total War fans. There’s a lot of rabble-rousing that went on. Given how easily outrage can be manufactured and go out of control on the internet, almost no room is left for civil discourse. That’s probably why Total War’s community on Reddit just decided to meme and joke about this entire drama. I guess this is 2018’s version of “I DON’T WANT TO PLAY AS PONTUS!”

The most hilarious part is that people are vehemently reacting to a game that was released five years ago. Oh well. We don’t know how far people will go for Rome, but we do know how far some gamers will go in the name of internet outrage. The answer: “very.”