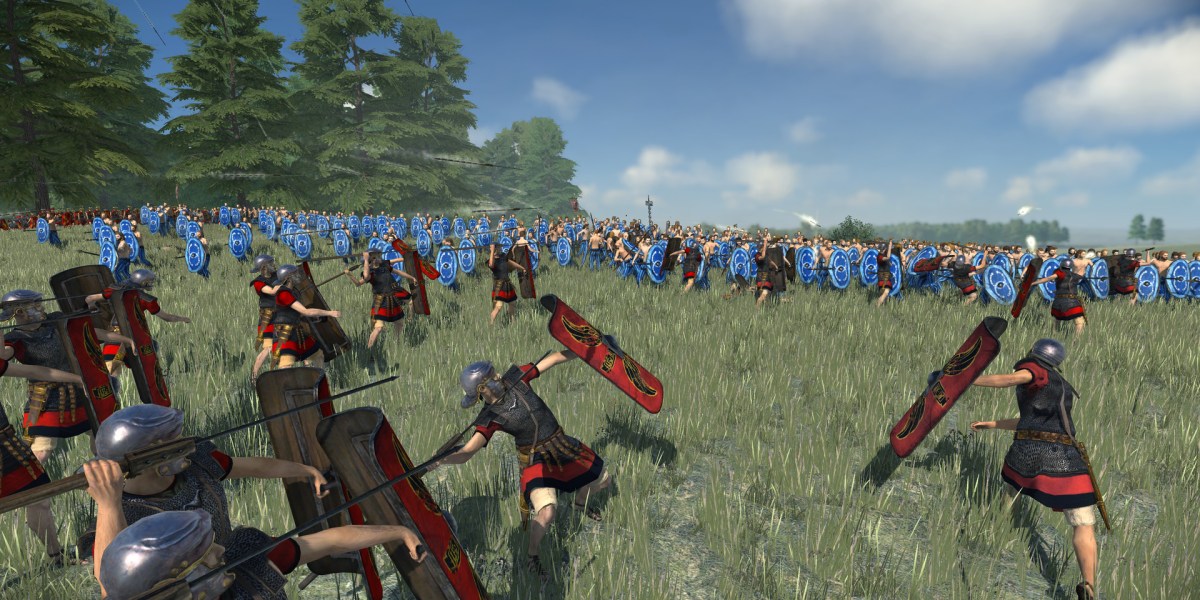 Rome: Total War initially released in 2004. Although it was the third game in the franchise (after Shogun and Medieval), it was actually the first entry that completely hooked me. I still remember going to my cousin’s home due to him having a beefier PC at the time and playing until the wee hours of the morning. That brings us to Total War: Rome Remastered, which updates this title for a new generation.

Total War: Rome Remastered features a plethora of upgrades and improvements. Many of these are visual, such as high-resolution textures and 4K support, while others provide quality of life (QOL) tweaks and additional detail. Still, after running through a couple of campaigns as the Julii and Egyptians, I noticed several issues that can lead you to ask the big question: is it worth it?

Total War: Rome Remastered includes the base game and two expansions (Barbarian Invasion and Alexander). You’ll need to select the game or expansion that you want to play via the launcher as opposed to being able to do that on the main menu (akin to newer Total War titles).

In the past, only a select few factions were playable. The rest had to be defeated during the campaign, or you could edit a text file to unlock them. In this iteration, however, you can simply tick a checkbox on the launcher to unlock each one.

You may choose to march for the glory of Rome as the three clans; the Julii, Brutii, or the Scipii. You can curb Roman ambitions as the Greek Cities, Carthage, Gaul, or Germania. Likewise, you can attain hegemony in the far corners of the world as the Seleucids, Egypt, Scythia, Britons, and many others.

The campaign map in Total War: Rome Remastered, overhauled and striking, makes your conquests look spectacular. Similarly, you’ll notice high-resolution textures for units, buildings, objects, and environments. Heat haze, fog, fire, and various special effects tend to dazzle like never before. Moreover, as mentioned in our technical review, there are a lot of tweaks that you can try out to suit your tastes. These include changing the vibrancy of the campaign map and unit color schemes. They can have bright, vivid colors, or muted, more realistic tones.

There are also a few QOL tweaks such as campaign and battle balancing, a map overlay, increased zoom levels, range markers, and more. Of course, you can even hide the UI during battles to get a more cinematic feel. Plus, let’s not forget the speeches of generals prior to a fight, each of them enough to bolster morale and keep the blood pumping.

All of these improvements were, in a way, supposed to bring Total War: Rome Remastered in line with more recent Creative Assembly releases. Sadly, developer Feral Interactive (the same studio that’s in charge of porting other titles to mobile) flubbed a few times as well. The remaster has a number of issues that are present in the original release, as well as core mechanics that could’ve seen better implementation.

Problems that would make the Senate gasp in horror

Chief among the issues in Total War: Rome Remastered is the auto-resolve system. Back in the day, you mostly had to worry about auto-resolve putting too much weight on chariots, not realizing the value of hoplites, and killing off all your elephants for no reason. This time around, auto-resolve is busted beyond belief. There were many times when I surrounded a settlement with multiple legions, with the system showing a 70-80% advantage in my favor. What happened next? Well, let’s just say I ended up suffering defeats. I would’ve been better off fighting these battles than relying on the computer to do my dirty work for me.

Speaking of battles, I feel that Feral Interactive could’ve done more to make campaigns more manageable. For instance, newer Total War titles had armies with their respective “reinforcement ranges.” In Total War: Rome Remastered, you still had to move your forces within a centimeter of the nearest hostile group or settlement just to ensure that you’ve got reinforcements. It doesn’t help matters that killing off weaker armies, even those with a single unit, is akin to playing Whac-A-Mole; you’d advance and win, but they’d retreat to a different location with minimal losses. Soon, you’ll have a bunch of single-unit armies just wandering around. If you’ve tried out Paradox Interactive’s grand strategy titles, then this is akin to the “shattered retreat” mechanic, albeit worse.

The problems don’t stop there. There’s a lack of a “control large armies” setting, and I’ve noticed that I can only field up to 20 units at any given time unless I let the AI control reinforcements. I haven’t seen a universal setting to have “guard mode” enabled by default, or a means of disabling “skirmish mode” when all units are selected. You’ll have to click on every unit to find out which ones have “skirmish mode” toggled.

Similarly, I’ve had a few qualms with how unit pathing is handled. Most notably, settlement walls and gates are designed for medium or small unit sizes. If you’re playing with ultra or large unit sizes, you’re bound to see a lot of soldiers clumping together since the openings and thoroughfares are so narrow. Pathing is also an issue on the campaign map with agents blocking the way when, in more recent Total War games, armies would ignore them unless an agent used a blocking action.

Speaking of agents, the new merchant agent is a welcome addition, as it allows you to earn more cash and monopolize trade goods. The downside is that information for all agents remains confusing. By now, we’ve seen how agents in other titles have a success rate when they’re used. In Total War: Rome Remastered, I was initially surprised when my spies and merchants were failing their actions or getting killed when I was right-clicking on targets. Apparently, it’s because the success rate is now shown in the new “send agent” panel. You’d have to scroll down a list to see which actions would be successful as opposed to seeing these percentages just by mousing over a target.

It’s also worth noting that, apart from mini-armies crowding around, “agent spam” is very much a thing. You’ll find half a dozen diplomats, merchants, assassins, and whatnot in each region of the map. It’s also possible for the allied AI to take out your agents in quick succession. For instance, in my campaign as the Julii, a merchant from the Roman Senate (my ally) killed off several of my merchants, using them as a means of leveling up.

This litany of woes is also affected by the game’s save system since both saving and loading use the same panel. There were actually a few instances when I double-clicked on a file because I planned on saving, only to realize that I loaded it instead. To be fair, incremental autosaves do exist, but only for the end of the last turn and the start of the newest one.

Oh, and you won’t even be able to change the camera’s tracking of characters/armies after you’ve ended your turn. You can only change the setting prior to starting a campaign and it’s set in stone afterward. Additionally, you’ll be annoyed since clicking on a banner doesn’t automatically select an army inside a settlement. Instead, you’ll need to click on the settlement, click on the army tab, and choose troops manually (or hit Ctrl+A to select the entire bunch).

Lastly, playing as a Roman faction can be downright ridiculous owing to missions from the Senate. If other Total War titles (including Rome 2) had objectives that nudged you towards a plausible, historical path, then Total War: Rome Remastered will have you going all over the place. A good example is how the Julii normally fights Gaul, and yet the missions you receive target parts of Sardinia, Illyria, and Greece. The choices seem highly random too. If you’re someone who’s gotten used to how Creative Assembly has handled its offerings for the past decade or so, then the decisions made by Feral Interactive for Total War: Rome Remastered will boggle the mind.

Perhaps it’s fitting to state that Total War: Rome Remastered isn’t necessarily for the die-hard Total War fan. Rather, it’s for those who miss this one particular game in the franchise, and maybe its two expansions as well. However, if you’re like me, then you enjoyed this classic a decade and a half ago, and you’ve likely discovered how Creative Assembly has innovated its franchise and diversified its portfolio. After all, we’ve seen what the studio can do with Shogun 2, Rome 2, Three Kingdoms, and the Warhammer games. As such, this remaster is simply a nostalgia trip with outdated mechanics that haven’t aged too well.

While my sentiments don’t take away from how amazing Rome: Total War was back in the day, it was just a product of its time. It was great then, but you’re better off leaving the memories alone now.