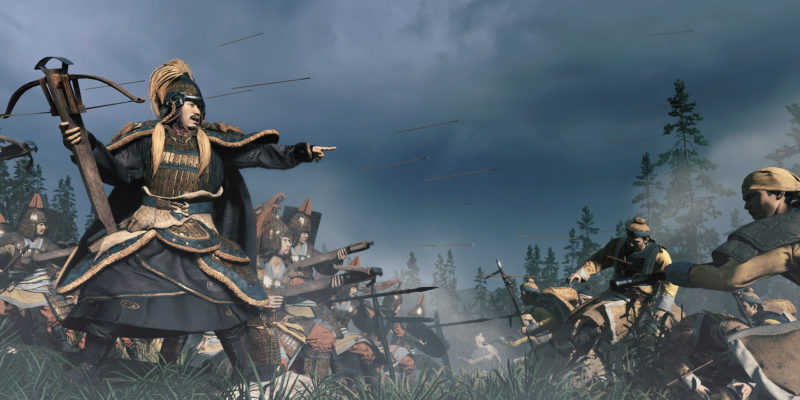 Total War: Three Kingdoms – Mandate of Heaven adds several Han lords for you to pick as you battle against the Yellow Turbans. One of them is Liu Chong, a scion of the House of Han and Prince of Chen. This mini-guide covers Liu Chong’s faction mechanics, opening moves, dilemmas, events, and additional tips. He’s available as a leader in Mandate of Heaven as well as the base game’s 190 CE start date. 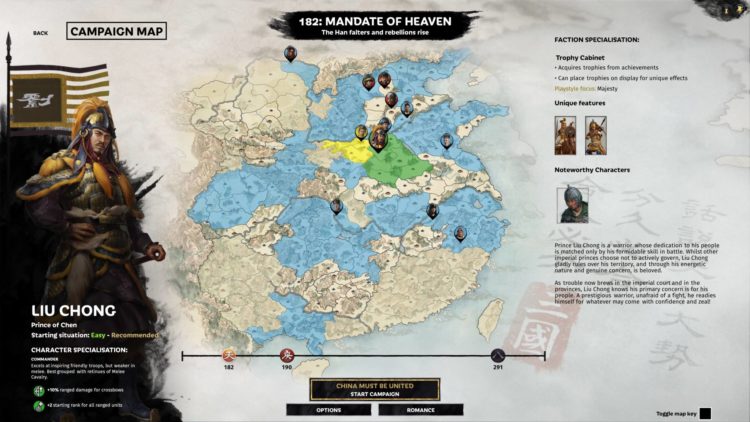 Liu Chong’s unique mechanic is Fortitude. It provides morale buffs when defending or attacking, additional unit experience, and a slight increase to your troop replenishment.

The “Trophy Cabinet” is another unique mechanic for Liu Chong in Total War: Three Kingdoms – Mandate of Heaven and the original campaign. Completing certain objectives will unlock banners and other trophies for use. You can have up to four of these equipped at any given time leading to additional faction-wide buffs. Some examples include:

Liu Chong has the Chen Royal Guard (heavy crossbow infantry) and Chen Peacekeepers (heavy melee cavalry) as his unique units. His main focus, given additional unique ancillaries from quests, will be on ranged damage (particularly crossbow units) making your armies deadlier from afar.

Liu Chong’s Mandate of Heaven campaign will have him start with control over Yingchuan and Chen. Both commanderies have several farms that you can upgrade, and you’ll likely focus on increasing your food output and peasantry income during the early game.

You’re also told to be wary of Yuan Shu’s machinations. Historically, Yuan Shu’s ambitious scheming led him to have Liu Chong and his advisor Luo Jun assassinated in 197 CE. Total War: Three Kingdoms – Mandate of Heaven lets you play as the Prince of Chen hoping you can change his fate. 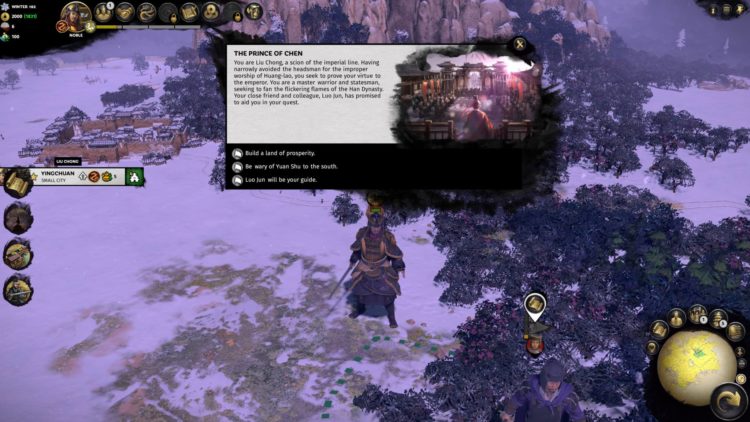 Total War: Three Kingdoms – Mandate of Heaven‘s leader selection screen will tell you that Liu Chong is an “easy/recommended” choice to start your campaign with. He’s extremely lethal due to all the crossbow and ranged unit buffs, although some of his mechanics are not well-suited for empire-building or resource-generation.

Note: There’s a known bug when looter armies besiege a settlement with officers defending it, and your only option is to surrender without a fight. As such, it’s important to make the right moves. 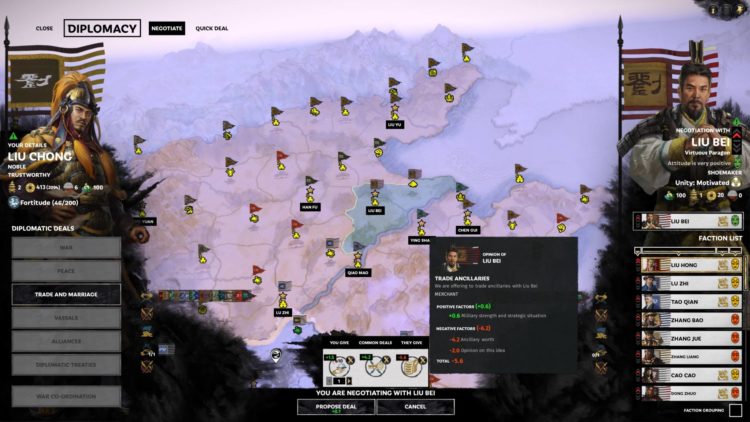 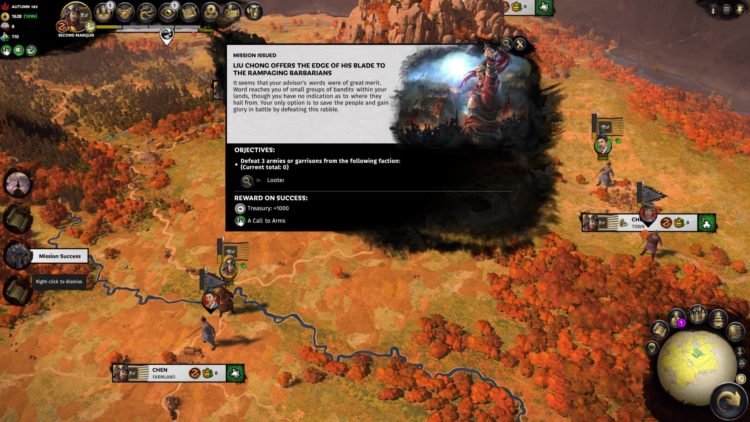 Mandate of Heaven: Liu Chong and the Mandate War

There’s a reason why I suggested that it’s best to save at around turn 6. Once the Mandate War event fires on turn 8, a lot of issues can arise. The outcomes tend to be dependent on the AI’s moves leading to reloads.

Zhang Bao tends to bypass Lu Zhi and head straight for Yingchuan farmland. If you got there early, it’s possible to ambush him. Alternatively, let him capture the settlement and defeat him on your next turn since you’ve got two armies. Switch to ambush stance while defending the riverbank since a couple more Yellow Turban forces might head your way.

The biggest and most annoying threat, however, is He Yi. He spawns in Yuan Shu’s territory to the south. There’s a good chance that he’ll capture one of your settlements (you’ll want to reload). Then again, in my experience, there’s also a possibility for his army to get immediately walloped by Yuan Shu. 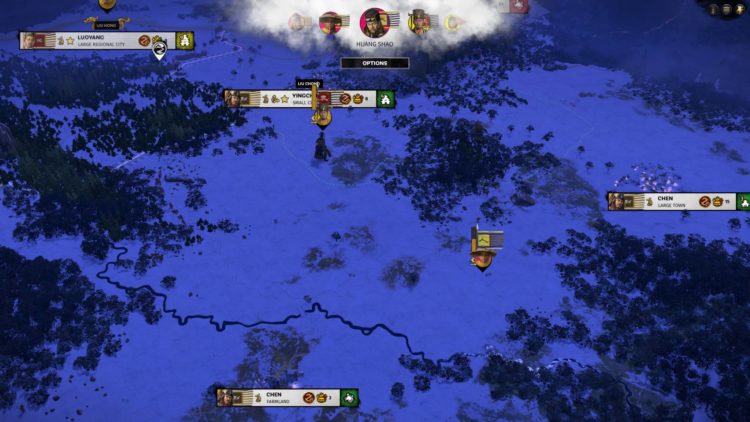 Zhang Jue and the north versus protecting the heartland

Once you’ve eliminated the early-game threats (He Yi and Zhang Bao), head for Huang Shao’s captured territories. In my case, Yuan Shu also helped out immensely with reinforcements.

Much later, you’ll head further north to annihilate the Yellow Turban leader Zhang Jue and any other remnants. Again, Yuan Shu was instrumental in the mystic’s defeat.

Alternatively, if you don’t want to head north and you prefer a more historical route, you could just stick to further developing Yingchuan and Chen. Your food generation due to farms will be through the roof, and you could use food in exchange for gold. This should let you build up more armies.

You won’t march against the Yellow Turbans (your allies will handle the Zhang brothers for you). Instead, you’ll just “declare a feud” to have smaller conflicts against nearby Han lords to build a power base. 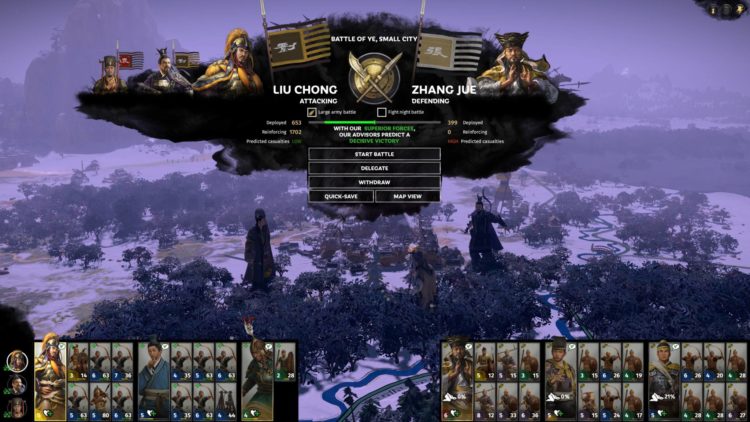 As you get closer to turn 34 (Liu Hong’s death event chain), be prepared to renew some diplomatic pacts or enact new deals. The dissolution of the Han Empire will turn Mandate of Heaven‘s campaign into a free-for-all. You should also deploy an army in Yingchuan. Once Dong Zhuo declares war on you, the capital Luoyang might be undefended. 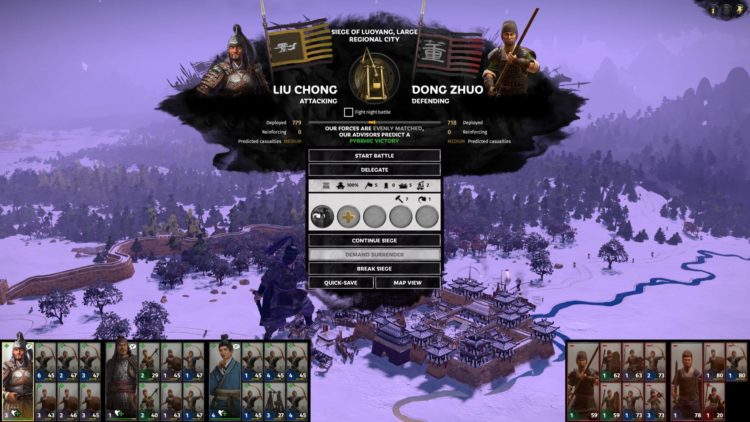 Liu Chong’s dilemma occurs on turn 12. Luo Jun will give you a choice between focusing on the war effort or being a bringer of peace. Each decision will lead to additional tasks that reward you with gold.

If you choose war, your next moves all involve committing to combat and doing battle. You’ll be asked to have 20 units in your faction followed by defeating three armies led by the Yellow Turban forces. Finally, you’ll have to reach rank 6 with a character.

If you choose peace, this choice would lead to objectives where you’re simply upgrading Chen’s buildings and increasing your prosperity. It’s a somewhat boring choice considering Mandate of Heaven‘s main conflict, but it’ll strengthen your power base. 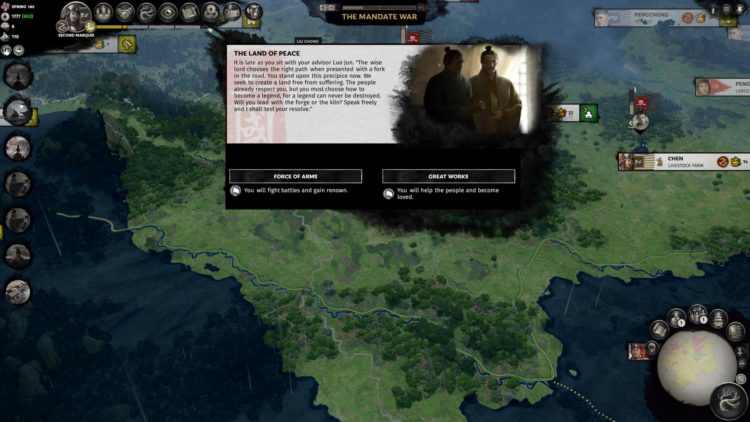 While Mandate of Heaven‘s conflict is ongoing, the Han Emperor Liu Hong will present you with another dilemma. As far as I know, neither choice would lead to a drastic outcome in the end:

On turn 42, Yuan Shu will declare himself as emperor, earning him the enmity of the lords of the land. A couple of turns later, he’ll also ask you for support:

I had some extra gold and was able to pay him off. I’m assuming that declining Yuan Shu’s proposal would simply lead to a declaration of war down the line. But paying him off, for some reason, never leads to war several years later in Mandate of Heaven.

I was actually surprised that there’s no event where Yuan Shu attempts to have Liu Chong assassinated. For the most part, Yuan Shu remained a stalwart ally and someone who often provided backup when needed.

As I continued with Mandate of Heaven‘s campaign, I was able to dislodge Dong Zhuo from his western capital and I ended up controlling the Han Emperor (Liu Xie) and the NPC Han Empire. I was still contending with random Yellow Turban rebel stacks popping up in the north due to my inept AI allies who can’t handle Fervor.

I eventually annexed Liu Bei’s faction and reached King rank. Liu Chong declared himself as the ruler of the “Kingdom of Chen” and not as a renewed Han Empire. Even though Mandate of Heaven groups him and Liu Hong as members of the “House of Han,” he doesn’t gain the same mechanics such as court factions or political influence.

Empress He also ended up in my court and I adopted her to see where all the other imperial family members were. I then married Zheng Jiang so that Liu Chong can start his new TV series: “How I Met Your Bandit Mother.”