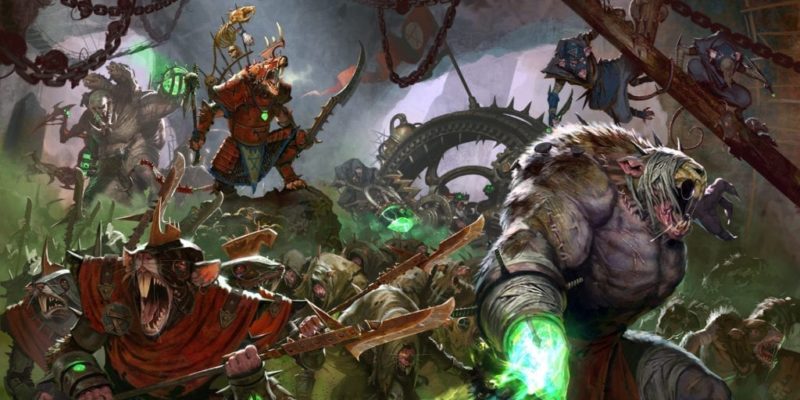 It was a world that brought us memorable characters. We read tales about Gotrek and Felix, a Dwarf Slayer and his human companion, and their arch-nemesis, the Grey Seer Thanquol. Likewise, we knew of Magnus the Pious, savior of The Empire. We marveled at Grimgor Ironhide, DA BESTEST! And, of course, we bowed to Settra the Imperishable, Lord of Nehekhara, King of Kings, Chosen of Ptra, Slayer of Pretenders, He Who Does Not Serve, etc.

These characters and all the lore and trappings of the Warhammer Fantasy Battles universe vanished all too suddenly in an event we called The End Times. Now, we have games like Total War: Warhammer and Vermintide to relive them.

Warhammer: The End Times of the Franchise

When Games Workshop created Warhammer Fantasy Battles in the early 80s, it revitalized interest in the tabletop community. Fun fact: before Blizzard decided to make Warcraft, they planned to develop a Warhammer game. Unfortunately, negotiations went a different direction. How vastly different would the gaming industry have been if we saw Karl Franz of “The Human Alliance” face off against Grimgor “Warboss of Da Orcish Waaagh” in World of Warhammer?

Anyway, Warhammer Fantasy was Games Workshop’s main tabletop franchise until sci-fi ruled the scene. A few years after Fantasy was released, they kickstarted Warhammer 40,000 or 40K. Warhammer 40K was like the younger sibling who found more success and opportunities and made more friends as he grew up. 40K had such a huge following that Fantasy‘s player base was but a fraction of that. After all, why design knights and cavalry when you can paint Space Marine chapters and Baneblades? It was a common belief that a single chapter of Space Marine miniatures could outsell the entire Fantasy catalog. In this manner, Warhammer 40,000 overtook Fantasy and never looked back. Side note: We can talk more about games based on the Warhammer 40K universe, but that’s a story for another time.

And so Warhammer Fantasy slowly but surely became a niche offering within a niche hobby. Three decades after it was first introduced, it had met its End Times.

Warhammer: The End Times in the Lore

Instead, we saw the rise of the great necromancer Nagash and the fall of Settra and the Tomb Kings. We saw the Elven Civil War, the scouring of Naggaroth, and the destruction of Ulthuan. We witnessed the ignominious fall of human kingdoms and settlements one after the other, be it from Chaos armies led by Archaon the Everchosen, rampaging Beastmen, or, more than likely, the Skaven Vermintide.

Fans saw beloved characters die left and right. Those who followed the tales of Eltharion the Grim and Wulfrik the Wanderer saw them perish unceremoniously. Meanwhile, Malus Darkblade, who had his own novel series years ago, died off-screen! The author just mentioned that Malus died in passing. Certain characters such as Skarsnik did not even show up at all. We saw strong and noble heroes get offed as if by random chance. It was as if The Red Wedding in Game of Thrones was extended to four novels instead of just taking place in Storm of Swords. These decisions sometimes led fans to do drastic things, such as one player who burned his armies “in protest.”

Warhammer: The End Times of Reason

Perhaps the most significant description of the world’s lore, in its twilight, was how everything felt rushed. For instance, in one of The End Times novels, The Curse of Khaine, the whole plot felt like a jumbled mess. That extended to the rest of the universe and to other factions. Lizardmen had no clue what The Great Plan was, so they blocked meteors and flew away on their spaceships. Nagash dawdled until his Black Pyramid exploded. Battles amongst Elves raged across Ulthuan, and then they had to retrieve an artifact, and then another artifact, and then the island sunk. Everyone suddenly became Power Rangers, or rather, Incarnates.

It was almost downright insulting, and even worse was how it all ended with Mannfred von Carstein. The vampire lord, in his pettiness and spite, killed one of the Incarnates during the final battle. This caused a chain reaction which ruptured a Chaos vortex that swallowed the world.

It felt all-too-sudden and shocking. The last time Games Workshop tried to move the plot forward was via their Storm of Chaos campaign in 2004. Games Workshop had to pretend that it never happened because the planned triumph of Chaos ended with their crushing defeats in player contests. In contrast to that, The End Times felt like they simply wanted to get it over with.

Rather than see the 9th Edition, fans, instead, saw the dawn of a new age — The Age of Sigmar. This was met with much contempt and disappointment. Afer all, one of the factions, the Stormcast Eternals, reminded everyone of Space Marines. It felt as though Games Workshop “just put Fantasy in Space” or vice-versa. And although Age of Sigmar has improved over the next few years, the end of Warhammer Fantasy still left a bitter taste among long-time fans.

Bringing back the world through Total War and Vermintide

And that brings us to video games based on Warhammer Fantasy. In the past, we had ones such as Mordheim: City of the Damned and Warhammer Quest. These were minor offerings which had a small following. The first Vermintide game from developers Fatshark was also part of this bunch. It was Left 4 Dead set in the Warhammer Fantasy universe and emphasized fast and frantic melee combat.

It wasn’t until the arrival of Total War: Warhammer that things turned around. It’s worth noting that Total War has been known for decades as a historical grand strategy franchise. When Warhammer was announced, the excitement clashed with deeply-held beliefs that it should stay within the bounds of history. And then, Creative Assembly exceeded all expectations when Total War: Warhammer became the fastest-selling game in the franchise. Despite having only a handful of factions, each one had enough unique mechanics that you never felt you were just playing a carbon copy of the others.

This past March, Fatshark released Vermintide 2, which did so well that it outsold the original in a week. Keep in mind that the first Vermintide game had been on shelves for three years. The bloody, gritty, and suspenseful action was back. In spite of some bugs along the way, the game maintained a strong and loyal following. It seemed that everyone wanted to team up and kill rat-men and Norscan Chaos cultists.

What both these games have done is create a living, breathing atmosphere that a player can totally immerse themselves in. You don’t need to be a fan of Warhammer to realize how much detail and dedication it took to craft the titles. And, if you’re a Warhammer fan, then that’s an even bigger treat. The games allow you to relive key moments in the lore (or fluff) that, at times, might give you goosebumps.

In the Vermintide games, even though you’re not leading armies, you’re still in the thick of the fighting. Whether you’re bragging to cousin Okri or you’re annoyed by Mayflies, you are reliving what The End Times was like. You get a sense of desperation and a depiction of a hopeless struggle. In Vermintide 2‘s Empire in Flames map, I went upstairs to an inn and saw twenty desecrated and flayed bodies. Were they chewed by Skaven? Were they hacked by Norscan raiders? I didn’t know. All I knew was that it was how The End Times have been depicted in the lore.

Perhaps what these two games have done is shatter the notion that Warhammer Fantasy was just a niche hobby; that it was just a dead tabletop game. These ideas have been replaced by the fact that Warhammer Fantasy has mainstream engagement now. Thousands have bought and played these games, and they’re still going strong. Many are anticipating what their respective developers have in store. With the success of these games, we might also see a strong following develop for the upcoming Chaosbane. It’s an ARPG set in the Warhammer Fantasy universe which we’re also looking forward to.

As a long-time Warhammer Fantasy fan, I truly feel thankful that these games are around. I am happy that fellow fans are reliving “The World That Was” and many more newcomers are eager to learn about the franchise. We may not be able to change the past, but gosh darn it, we’ll find ways to relive it. And so, I guess the only things left to ask would be for Holy Sigmar to bless these ravaged games, and for everyone to annihilate Mannfred.