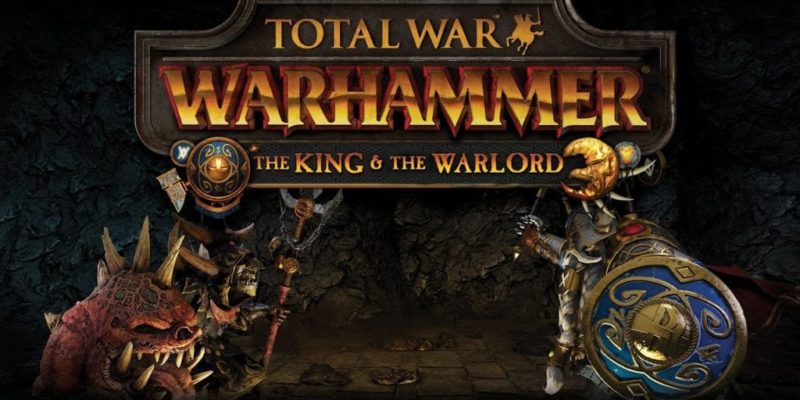 As the hints of the past couple of days have been heavily indicating, today’s announcement of The King and the Warlord DLC ‘Lords Pack’ for Total War: Warhammer boosts the Greenskins and Dwarfs. It’s using the characters of Karak Eight Peaks as its theme, which means Skarsnik (and Gobbla!) as a new Legendary Lord choice for the Gobbos and Belegar Ironhammer for the Dwarfs.

The structure and contents are similar to The Grim and the Grave, with the further addition of new units, new heroes, and a bunch of Regiments of Renown to hire. For the Greenskins, the big additions are the excellent, rotund maws known as cave squigs. With the DLC you’ll be able to raise Squig Herds (War beasts, Anti-infantry, Vanguard Deployment) and Night Goblin Squig Hoppers (Cavalry, anti-infantry, Vanguard Deployment, Poison Attacks – yes, these are goblins riding squigs).

As Legendary Lord of the Crooked Moon gobline tribe, Skarsnik gets a bunch of goblin upkeep bonuses and can predominately only hire goblin units. Karak Eight Peaks itself sounds like the only source of Orc recruitment for him. Skarsnik will start at Karak Azgaraz, where he’s been squig hunting.

Over on the Dwarf side, The King and the Warlord will introduce Runelords to Total War: Warhammer. These guys can “call upon the power of [the] runes to invigorate friendly units and hinder their foes” and, most importantly, can ride an Anvil of Doom at level 6 onwards. The Dwarf side will also be getting Rangers (Ranged/melee, fast, Vanguard Deployment, can Stalk), expert crossbowmen whose elite version is Bugman’s Rangers (like normal Rangers, but better and with more alcohol). Finally, another Dwarf war machine will be added: the Bolt Thrower.

Belegar will start in Karak Izor, in Border Princes territory, and “begins play with the spirits of his Ancestors as his companion Heroes. King Lunn The Ironhammer (Thane), Halkenhaf Stonebeard (Thane), Dramar Hammerfist (Master Engineer) and Throni Ironbrow (Runesmith) are Ethereal Heroes, with all the benefits the Ethereal trait provides.”

The King and the Warlord will be released on 20 October, priced at $8.00 USD (though it has 10% off right now). There’s a trailer below, along with some screenshots.