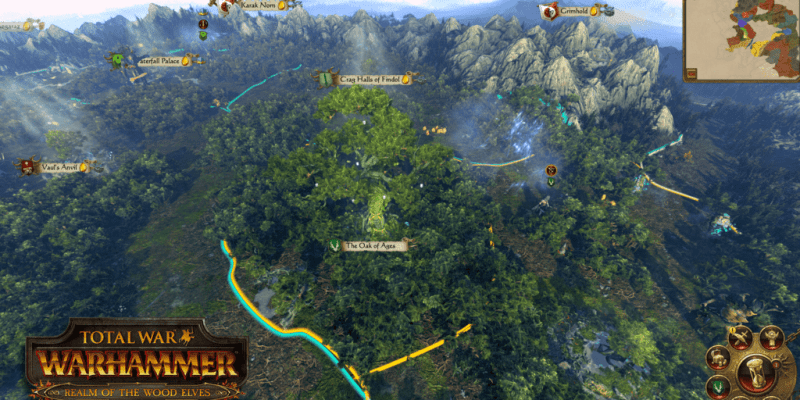 One of your duties in the upcoming Wood Elf DLC for Total War: Warhammer will be appointing lords to the Eleven council. They may be forest-dwelling weirdos, but the Wood Elves still follow an aristocratic hierarchy to some extent.

Details of the Elven Council (or half of it, anyway) have been divulged today by Creative Assembly. The Council will differ depending on whether you have Orion or Durthu as your Legendary Lord. Durthu’s set-up is a little different, and called ‘Gathering of The Ancients’ (the forest-spirit equivalent of the council).

At the campaign’s opening, three positions can be filled: Protector of The Oak, Elder Speaker, and The King in The Wood. The latter is for Orion only, and boosts income from sacked settlements. Protector of The Oak gives “improvements to Forest Spirit units, reduces enemy Hero success chances, and makes Treemen a lot cheaper to recruit” for any level 10 (or above) Lord. And Elder Speaker can be given to any level 15 Lord, “majorly increasing his aura size, unit experience gains in his army, and providing a powerful factionwide trade-income boost”.

Four other offices can be unlocked by constructing the appropriate council building: The Wildwood Waystones (Warden of The Wildwood), The Wild Heath (Herald of The Hunt), The Wardancer Feast Halls (The Trickster’s Masque), and the Starlight Forge (Starlight Craftsman).

A couple of these have been summarised. Warden of the Woodland “brings increases to public order, reduces construction costs, and brings a strong improvement to the melee attack characteristic of Wildwood Rangers”. That melee attack bonus can be stacked with others, if you send the Lord in question down the melee specialisation skill tree.

Herald of the Hunt will get “reduced upkeep and recruitment costs for Wild Riders (stag-riding melee cavalry) and 20% improvement to his army movement range”. In addition, a Wild Hunt will periodically take place throughout the campaign. When it does, the Herald will temporarily receive an increase to his charge bonus, even further movement boosts, reduced campaign upkeep, army melee damage buffs, and more income from razed settlements.

That’s it for Orion’s council; the wiki signs off by suggesting that a proper look at the Amber resource will be coming next. From what’s already been talked about, it sounds as if Amber doesn’t tick over per turn like gold, but exists as long as you hold areas of the map. A given area might provide ‘2 Amber’ for as long as you hold it, for example. That might be enough to support a unit or two, but if the territory is lost you’ll suddenly have an Amber upkeep debt to figure out.