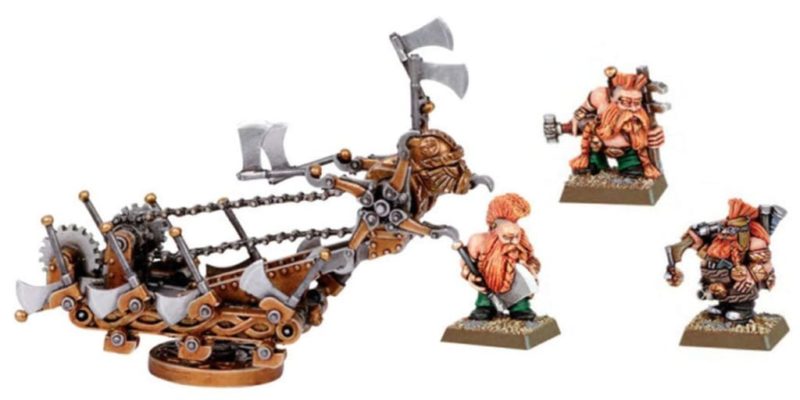 Across the life-span of the Warhammer Fantasy Battles tabletop game, Games Workshop released a number of units that were flat out absurd. Not absurd meaning overpowered (although yes, that too – looking at you 5th Edition Nagash), but silly. Ridiculous. Goofy. Some of this stuff made it into Total War: Warhammer (the ‘massive slingshot with a pointy-hatted goblin in it’ doom-diver is wonderfully present), but there’s plenty more so-stupid-it’s-amazing material to be mined if Creative Assembly feel like doing so.

I dearly hope that’s the case. The release of the Undead Blood Knights with the first major patch shows that they’re willing to retroactively plug some army roster gaps, which gives me hope that some of the more utterly bonkers Warhammer unit types listed below might eventually appear.

A few of these choices come from as-yet-unreleased factions, but others would have to slot into existing Total War: Warhammer armies. Not all of these suggestions come from 8th Edition (upon which Creative Assembly seem to be basing their lists), but damn it, they were too ludicrous not to be included. 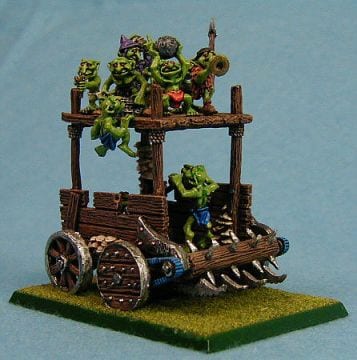 This weird contraption disappeared from the army lists after 7th Edition. It’s basically one of those railway hand-cars usually associated with sped-up silent movie stars or Looney Tunes characters trying to flee from self-inflicted peril. Except with snotlings.

Snotlings, for those who don’t know, are even more pathetic and diminutive greenskins than goblins. Somehow, though, they’re smart enough to build pump wagons. If by ‘build’ you mean slap some rickety wooden parts together and stick the equivalent of a spiky push-mower blade on the front.

The pump wagon is largely useless, but may on some fortunate occasions manage to collide into a high-value unit of knights causing mass destruction and much hilarity. 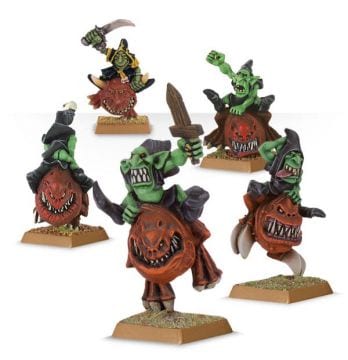 I’m actually kind of surprised Squigs didn’t make it into Total War: Warhammer the first time around. They’re synonymous with goblins (night goblins in particular), and are pretty much a huge ball of muscle with legs and a gigantic, hungry mouth. In the tabletop game, their function was to be prodded towards the enemy, which they would (ideally) consume.

For bonus idiocy points, Games Workshop also created Squid Hoppers; intrepid night goblin jockeys who would attempt to ride Squigs into battle. Their movement was almost entirely random, and they were prone to bouncing on your own forces by accident. 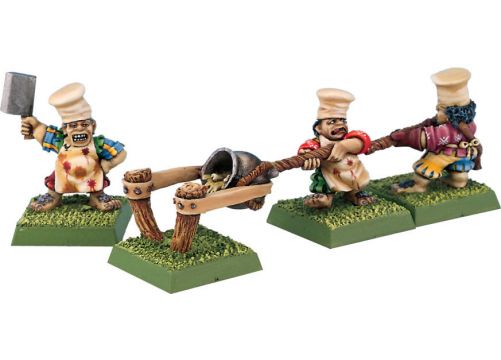 Another casualty to later editions of Warhammer, but an absolutely classic piece of tabletop artillery. Hailing from The Moot (in Stirland, inside the Empire), halflings are a peaceful lot and generally not a whole lot of use in the sorts of hell-flecked battles that rage across the Warhammer world at any given moment. They do love cooking however, and have ingeniously managed to weave this skill into the construction of a unique machine of war.

Just as the doom-diver is a massive rubber band created with the intent of firing a goblin into the air, the Halfling Hot-Pot Catapult is a sling-shot designed to launch delicious soup at the enemy. Delicious, but also scalding hot. And housed in a rapidly-propelled cast-iron cauldron.

Like the Snotling Pump Wagon, half the fun of this unit was seeing it cause fatal damage to much prouder, costly tabletop models. Imagine, then, the joy it could bring to vanquish Mannfred Von Carstein in Total War: Warhammer with the equivalent of a fancy French stew and a big metal headache. 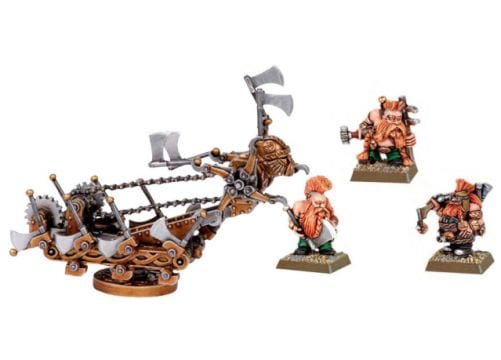 Up to this point, I’ve either seen or actually owned all of the units mentioned. This bizarre thing, though, I’ve only witnessed in images like the one above. Apparently part of the Dogs of War mercenary rule-set, Malakai Makaisson’s Goblin Hewer is … well, it’s sort of like a piece of gardening equipment gained the ability to sprout axes everywhere. I’m not exactly clear on how it’s supposed to work (other than push it towards goblins and wait for results), but I do know that an inclusion in Total War: Warhammer might actually tempt me to play as Dwarfs for once. 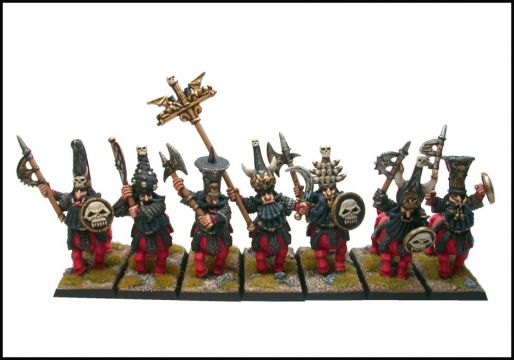 The later designs for these guys made them decidedly less goofy (and more ogre-ish), so it’s really the version pictured above that I’m talking about. Beastmen have shown us all how essential and entertaining half-bull units can be, and the Chaos Dwarfs already have a cameo role in Total War: Warhammer manning (dwarfing?) the Chaos Hellcannon. The next natural step is to introduce these hoofed fellows (preferably as part of a full Chaos Dwarf roster).

Valve have already conclusively proved that games players adore hats, and the original versions of the Warhammer Chaos Dwarfs had the very best hats in the land. Exhibit A: the image above. Add the bull factor, and you’ve got a unit that ticks the crucial boxes of being deadly, stylish, and extremely silly. 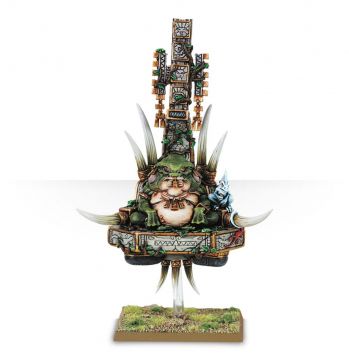 Strictly speaking, the Slann are not ridiculous. They’re ancient, absolutely terrifying beings with incredible powers. If the Lizardmen feel that moving an entire continent is part of the Great Plan for the world, then the Slann are more than capable of doing it. They operate on a higher level to most other beings in the Warhammer universe, their minds wandering the cosmos and fixating on problems of such unfathomable complexity that may take them decades to resolve.

But here’s the thing. Slann also look like bloated, grotesque toads. Warhammer’s greatest and most powerful magic users are not fair-haired Elven mages. They’re not the malevolent and sadistic Chaos Gods. They’re a dwindling number of morbidly obsese frogs. And that is amazing.

If (probably ‘when’) Lizardmen appear in Total War: Warhammer, one of these amphibious-looking chaps is a dead cert for a Legendary Lord. It could be a guy quite literally named ‘Lord Kroak’. I can’t wait. 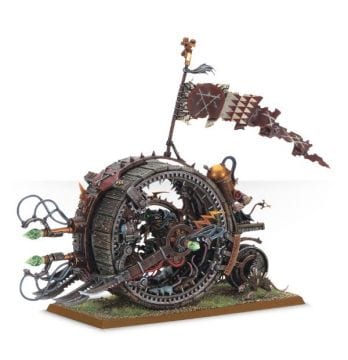 Never underestimate the Skaven when it comes to the art of the monstrously absurd. If the Dwarfs are the master engineers of Warhammer, the chittering rat-men are its mad scientists. The towering Doomwheel is a contraption powered by drug-addled rats, who both move the device by scampering manically around in the main wheel and, at the same time, power up a warpstone turbine.

If you’re not zapped to death by the warpstone, you’ll probably just get crushed under the wheel. Unless the Skaven pilot (also likely to be high as balls on warpstone fumes) fails to keep the Doomwheel on track. Which happens a lot, because the rat swarm aren’t exactly reliable for propulsion.

It’s pretty much a certainty that Skaven will be added to Total War: Warhammer in future, so let’s hope they bring a demented Doomwheel or two.

Any other bizarre Warhammer units or machines you think should make the cut? Leave suggestions below, if you fancy.

FIFA 17 shows off Pogba in his Man Utd colours