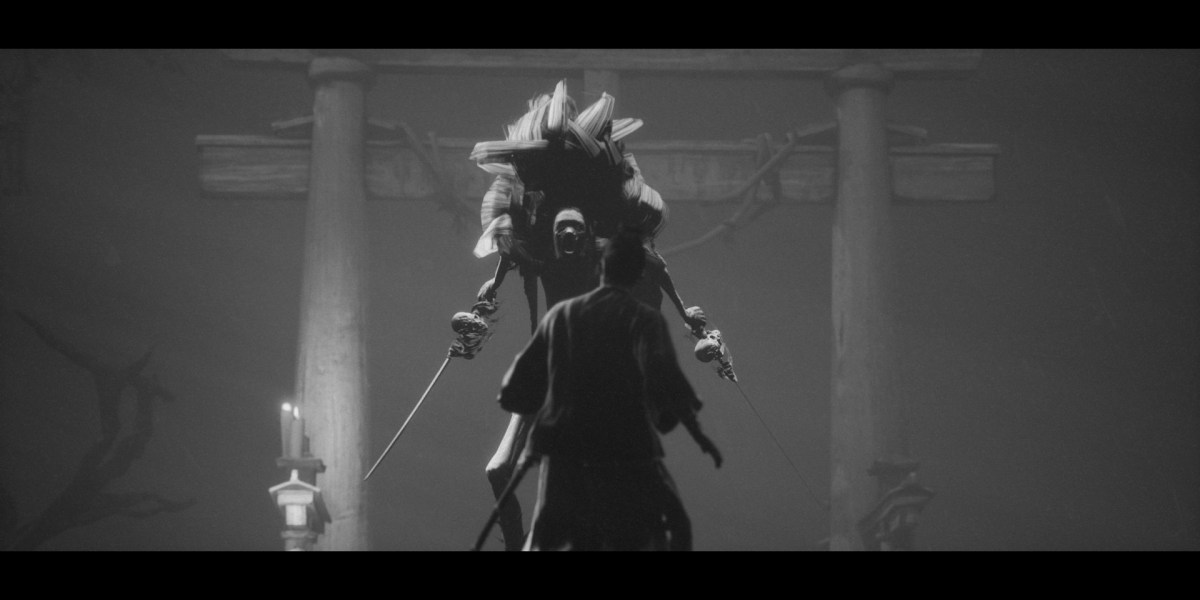 It’s impressive just how well Trek to Yomi lands the Kurosawa-esque, black and white Samurai movie aesthetic. Gorgeous panoramas give way to detailed overhead shots, starkly outlined in monochrome. Our beleaguered protagonist cleanly cuts his opponents down after nimbly shrugging off their strikes. The presentation as a whole is exactly where it needs to be, presenting a dour, conflicted tale of one man’s journey to right his own wrong. But a game can’t be judged solely by its presentation, which is where Trek to Yomi stumbles and trips. It may have the look down pat, but the deeply repetitious gameplay and monotonous design left me begging for the credits.

Trek to Yomi begins with a child version of Hiroki, the game’s protagonist, training with his sensei. Their session is interrupted when a local bandit arrives to attack their village. Hiroki sets off to catch up to his master, only to see him and the bandit dispatching each other. The plot jumps forward several years. Hiroki and his group of trained warriors leave the village to assist another during a raid. Only, the bandit he thought dead from before has set a diversion and attacked Hiroki’s home.

Hiroki engages him in a one-on-one sword fight where even if you’re winning, you’ll still be forced to lose. This results in Hiroki dying and entering Yomi, the Japanese underworld. He fights through a series of challenges to prove himself worthy of returning to the land of the living to stop the bandit who took his life and destroyed his home. Everything is delivered in full, convincing Japanese. The story is easily the best thing about the game, even if it isn’t exactly complex or deeply nuanced. There are even choices toward the end that let you decide the way things go. 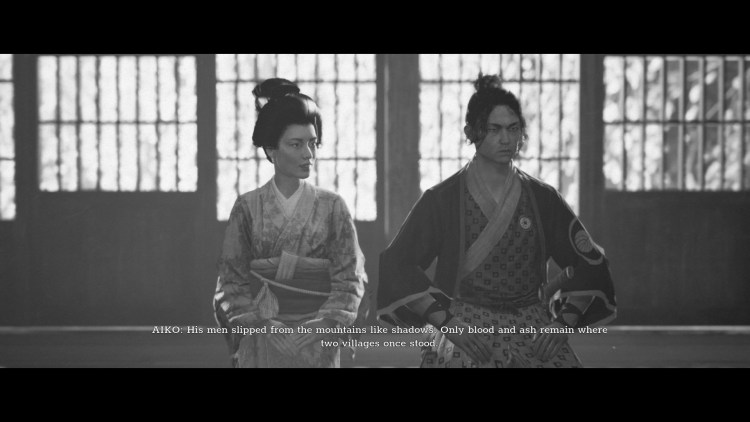 Fought one, fought ’em all

Trek to Yomi switches between giving you free control of Hiroki in 3D spaces via cinematic camera angles and 2D fights. You can choose your route through the areas or explore to find collectibles or upgrades, so there’s good reason to actually look around. When you fight, however, you’re locked onto a 2D plane and can move left or right while fighting enemies. Awkwardly, holding backward makes Hiroki back up instead of turning the other way. You need to tap a separate button to change direction. This is mostly needless, as you won’t often use backward inputs to do much of anything.

As you play the game, you’ll add new moves to Hiroki’s repertoire. You’ll find these in occasional semi-hidden scrolls or be given them outright as you progress. The thing is, combat is so braindead simple and easy that you won’t need to put much thought into your moves to begin with. Most enemies will die to a quick one-two light slash or a single heavy slash. You’ll often face multiple foes at once, but they don’t tend to attack simultaneously. Each enemy type usually behaves identically, so once you remember how they move, you’ll routinely employ a given method to deal with them. It’s excruciatingly dull after a couple of hours.

Part way through Trek to Yomi, I learned a three-hit combo that stunned foes, which quickly became the only thing I used. It was so powerful and useful in every situation that it simply made no sense to use anything else. It was also enough to deal with almost every encounter. I know I said that you’d have to recognize the specific pattern of each foe, but that’s true for how many hits enemies take and the amount of time they leave for you to strike. The general flow of fights is typically the same for nearly every enemy. 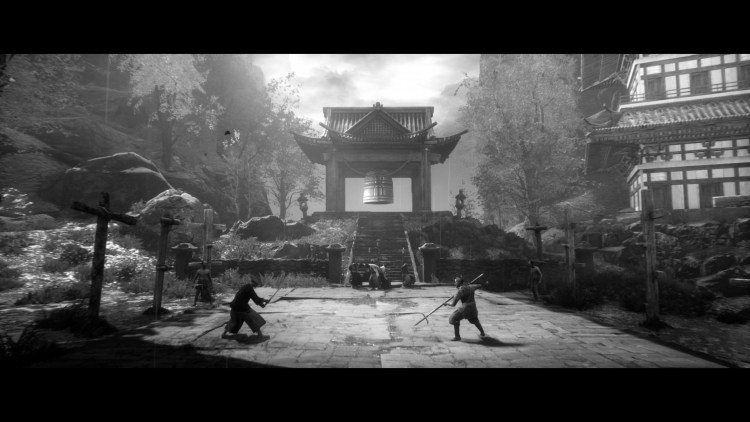 Hiroki can use light and heavy slashes, sure, but he can also block and parry. Attacks and blocking use up your stamina, so it pays to be mindful. But your stamina refills so slowly that it can feel borderline impossible to get through certain encounters without running out. It leaves Hiroki completely vulnerable in the meantime. Some enemies are more than happy to spam annoying combo strings ad nauseam, which makes this all the more unpleasant.

However, the parry is incredibly useful. If you’re playing smart, you’ll wait for your opponent to strike before parrying it and quickly cutting them down. Hiroki’s range is short and his movement is somewhat sluggish, so it’s simply a better idea to do it this way than to immediately go on the offensive. The forward slash you can use to stab at foes is awkward and overly slow, just like Hiroki’s heavy slashes in general. The end result is that all the fights end up mostly feeling completely lifeless and interchangeable. This is unfortunate, because that’s pretty much all Trek to Yomi has to it.

Partway through the game, enemy encounters simply got boring. I felt like the combat had ceased to develop meaningfully, and that I was simply fighting longer waves. You go through a brief area to walk to the next combat section and then you fight another corridor of the same enemies. Trek to Yomi is only about three and a half hours long, but I was so bored by the end that I just wanted it to stop. I couldn’t stand to keep fighting the same enemies again and again in the exact same way. And it just started grating on me more and more. 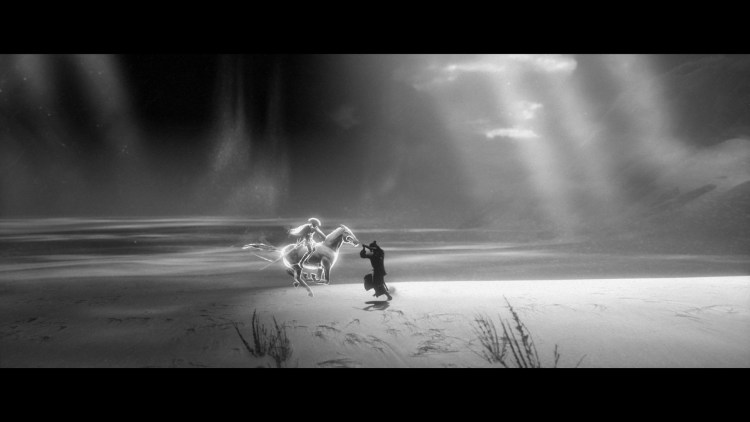 That’s not to say that the game didn’t try to interject some variety. Bosses seem to offer a change of pace, but they’re so incredibly banal and die so quickly that they feel mostly pointless. Different enemy types do show up, but they’re annoying, plain and simple. One continually summons more enemies until you kill it. If you don’t kill it in time, it temporarily retreats and summons another wave.

Projectile enemies are also awful. The foes with rifles are completely unfair and can magically reload the one-shot weapons just by kicking you. They love to shoot you before you can even see them, plus, despite the 2D planes, they can pass their bullets through their comrades to hit you, leaving you with no recourse but to try and kill their friends before they shoot you to death. It’s terrible. Some sections just drop these guys in randomly, demolishing the difficulty curve and making the veins bulge in my forehead. It doesn’t help that the black and white visuals can make it borderline impossible to see enemies standing in black spaces, either.

I was fairly certain I’d end up quite fond of Trek to Yomi back when I previewed it, but the game stops evolving early on and just has you do the same thing over and over with no break. Oh, but there are some boring puzzles to solve where you just copy the kanji you see in the environment.

You’d think the short length would help, but it still felt too long to me. I really do appreciate the quality of the game’s presentation and, really, the aesthetic is handled very well. But I simply find the game to be an obnoxiously repetitive slog that I have zero interest in replaying for the other routes. 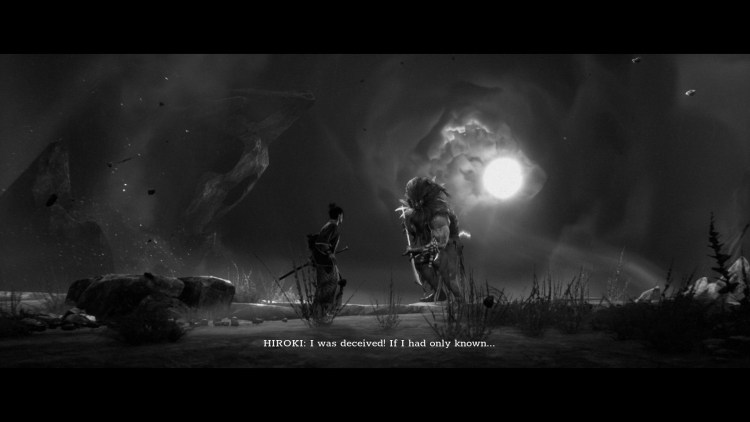 By Jason Rodriguez50 mins ago
Reviews