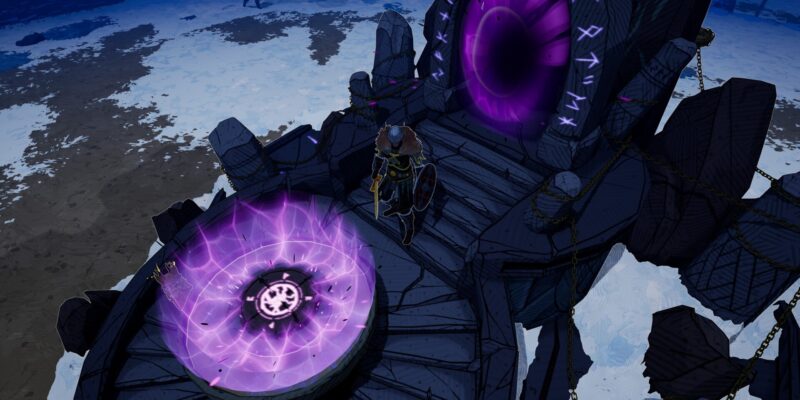 Although there are various activities for you to do in Tribes of Midgard, your journey will always have a key goal. That’s reaching the lair to defeat Fenrir, the monstrous wolf spawn of Loki and Angrboða. Here’s our Tribes of Midgard Fenrir boss battle guide to help you complete the main goal in Saga Mode for Season 1.

The first step whenever you begin your Tribes of Midgard run requires you to gather enough materials to prepare. This implies picking up branches and flint, and eventually mining rocks and cutting down trees. In turn, you’ll be able to craft better weapons and armor.

Then, from day 2 to day 4, you should be ready for the arrival of the first Jotunn. Defeating it nets you several items, and you’ll receive the next part of the main quest. During the course of your exploration, you should find a fast travel point near a broken bridge that leads to Glacier Peaks. Repairing the bridge requires the following:

Note 1: Building a quarry when you can might be necessary. It will generate cut stone and wrought iron to speed up this part of the main quest, which means you don’t need to waste a lot of time gathering materials or finding NPCs to trade with.

Note 2: This is actually when map seeds become vastly important Tribes of Midgard. Depending on your seed, you could end up at a starting location with the bridge fairly close by. In other cases, it can take you forever to find it. I’ve even heard of rumors that it was possible to skip the bridge altogether, but I’ve never experienced this in my playthroughs. The Belly of the Beast

Once the bridge is repaired, cross it and take a look at the next area. Do watch out for damage-over-time due to the cold. Anyway, you’ll find a couple of fast travel points and Fenrir’s lair. To open it, you’ll need the following:

Note: You can refer to our fragments and events guide for more info. The Gambit of the Gods: Fenrir boss battle

Inside the lair, you’ll find the Gjöll Boulder. Activate it to spawn Fenrir, the Season 1 Saga Mode boss in Tribes of Midgard. This monstrous wolf has a whopping 180,000 HP (or more if you’re with a group). Bring your potions and rare/epic gear with you, and make sure you’re prepared.

Likewise, you need to check if the village and Yggdrasil are well-defended, especially if you’re soloing. Ideally, you’ll want to start this encounter when it’s daytime (before day 11) to make things easier. If Fimbulwinter is already active, then the ordeal will be very difficult. By then, numerous Helthings will spawn and they can easily destroy your defenses and Yggdrasil while you’re busy with the boss.

Note: The challenge will be a lot more manageable if you’re with a group. If players die and aren’t revived, they can return to the base to fend off hostiles while teammates continue chipping away at Fenrir’s health. Anyway, Fenrir has a few notable attacks that are easily telegraphed:

Bows definitely help for this fight since you can stay further away and snipe it with your arrows. Alternatively, you can use weapon abilities that provide enough range (i.e., the Muspelheim Maul’s Fire Trail). Because Fenrir is slow and its animations can have it stay idle for a few seconds, you can use these abilities to damage it when the opportunity arises.

Certain class skills and perks also help, such as the Berserker’s combo critical hits, the Sentinel’s passive HP regeneration, and the Hunter’s/Ranger’s bow buffs. However, my personal preference is the Seer due to the “Iðunn’s Seedling” perk which can spawn seedlings that heal you consistently throughout the encounter. Defeating Fenrir in Tribes of Midgard nets you several rewards, including Ancient Cores, vines, large bones, and werewolf fangs. These materials are actually used to craft Fenrir-type items in the game. Moreover, you can check out the “Progress -> Saga Challenges” tab to see additional unlockables if you beat Fenrir a few more times during Season 1.