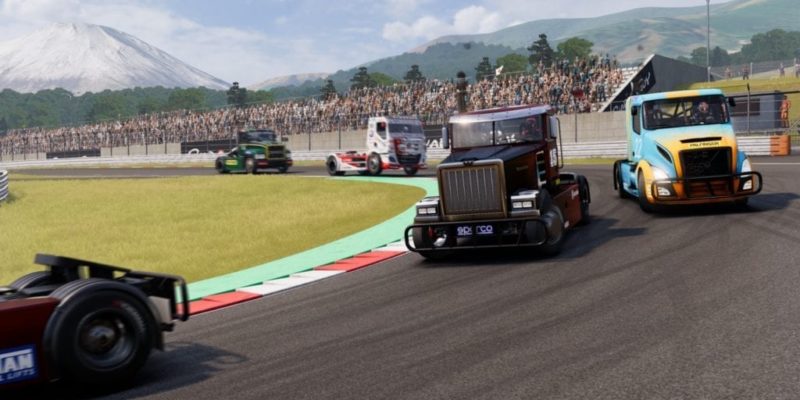 We are in a renaissance of sorts for truck games. Euro Truck Simulator opened the doors and showed us how peaceful a virtual cross country drive can be. American Truck Simulator brought that joy to the homefront. They opened up the zen of visiting familiar roads and discovering new ones. But one can only spend so much time driving in Washington, stuck at 65 miles an hour, before they want to really let loose. Enter Truck Racing Championship.

Interestingly enough, this game is marketed under a slightly different title across the pond in Europe: FIA European Truck Racing Championship. It’s a small difference, but cutting out both the league title, FIA (Fédération Internationale de l’Automobile), as well as the fact that the league is European speaks a lot to how publishers overseas think Americans will react to anything non-Amero-centric. Given how successful Euro Truck Simulator is, and really how far gaming as a whole has come these last few years, it feels very outdated to have regional titles.

The whole thing feels like back in the late 80s early 90s, when they would change box art for games like Mega Man to make them appeal more to the American action movie aesthetic. I thought we were past the era of forcing slight differences like Resident Evil vs Biohazard, and much like that classic change, the American title is worse. Sure, this is all a small gripe. After all, this change is only really in the marketing material. The game itself retains its European name on Steam. But I can’t shake the feeling of being talked down to from how this was handled.

Good news, though: none of that affects how the game plays.

This ain’t your pappy’s big rig racing game. Developer N-RACING and publisher Bigben Interactive are looking to have this be the only racing game you’ll need this summer. Truck Racing Championship will bring players 45 different lorries to use to tear up the track. Specifically, these are European trucks. So all the hours you’ve spent in Euro Truck Simulator are finally about to pay off! Chances are your favorite truck manufacturer is represented here as well. Volvo, Man, Freightliner, and Western Star, among others, are all on board. Honestly, it all looks pretty good too! There are also 20 teams to pledge loyalty to. Choose wisely and bring home a championship.

Truck Racing Championship isn’t overflowing with tracks like some modern sims, but it has 14 raceways for you to conquer. That includes official European Truck Racing Championship tracks. Additionally, fan favorites like Laguna Seca, Circuit of The Americas, and Fuji Speedway will also be available. You can run these tracks across the game’s five single-player modes and three multiplayer modes.

Remember when I said that your truck simulator experience would pay off? That doesn’t just mean knowing how these trucks handle. You’re going to have to manage real-world complications that come from racing vehicles this big. Obviously, you’ll want to consider your truck’s weight and center of gravity when cornering. But you also need to control the temperature of your breaks and the wear on your tires — just like the pros do! Overtaking is also not as simple as in most racing games due to the sheer size of the trucks involved. All this should add up to a driving experience different enough from your standard racing sim to keep your attention.

If this has piqued your interest, Truck Racing Championship is out as of today on Steam for $39.99. If you pick it up during the first week, you can also add the classic Indianapolis Motor Speedway to your tracklist. Let us know what you think and what your favorite truck is in the comments below.