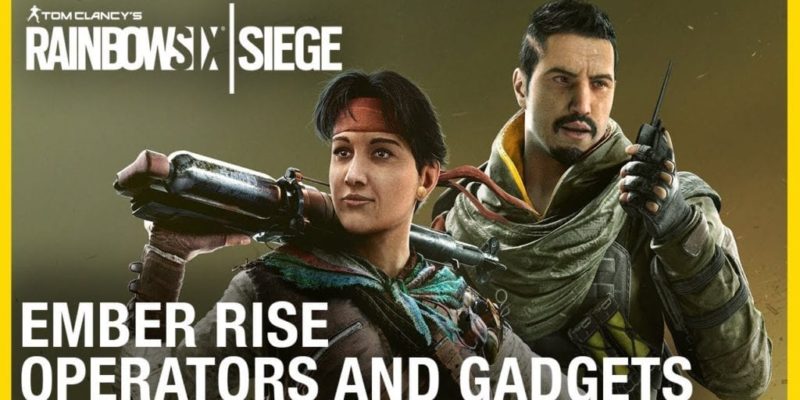 Rainbow Six Siege is really the little engine that could. Nearly four years after its initial launch, Ubisoft today announced the details surrounding its latest season of content. Ember Rise.

First, let’s talk operators. The defenders are getting a new trap operator with Goyo. This two speed, two armor operator brings the Volcan Shield with him into battle. The Volcan looks like an ordinary deployable shield from the front (complete with the latest redesign) but packs an incendiary payload on the back. Destruction of this shield in any manner, or simply shooting the red canister on the back, unleashes its fiery fury. The Volcan cannot be destroyed by a Twitch drone.

Speaking of deployable shields, their long talked about rework is coming with the latest season. They will now feature a small slit on either side allowing visibility through protection.

Goyo will be sporting the Vector APC from Mira and the TCSG12 shotgun from Kaid. Lastly, his gadgets will be the impact grenade and the nitro cell. It seems like he could be a master of top-level plays involving forcing enemies to route around the fire directly into a nitro cell. Really looking forward to what people are going to do with him.

The attackers will be getting their own little taste of the Batman lifestyle with Amaru. This two speed, two armor attacker comes equipped with the Garra Hook. An all-purpose grappling hook. This will allow her to reach any window, ledge, skylight, or hatch that isn’t blocked off by a Castle barricade. Considering how quickly Amaru can mantle her way over a window, she will be an extremely powerful rush meta operator. That quick entry can be dangerous though as a well placed Frost or Kapkan trap can stop her from pushing.  Amaru will come with the G8A1 LMG from IQ and Supernova shotgun from Frost. She looks like a ton of fun to play and I can’t wait to try her out.

Operation Ember Rise will also bring with it a rework of the map Kanal. A second bridge will be connecting the two buildings and there will be fewer spots to safely run out on attackers. There will also be fewer windows for attackers to breach as well as better color coding for interior rooms.

Rainbow Six Siege will also see a swath of changes to its matchmaking and ranked systems. There will be bigger penalties for leaving games and AFK players will now drop the defuser if they have it. On top of that, there is an entirely new rank. Champions. This top tier rank is reserved for only the best players boasting a 5000+MMR. For reference, the current middle rank is about 2500MMR and each win can net around a 100MMR increase. For lower ranked players, like myself, there will be more tiers for the Copper, Bronze, and Silver ranks, while Gold ranks are being trimmed back. The map rotation in ranked is also changing. Hereford Base, Themepark, and Fortress are all getting the ax, while the recently remodeled Kanal is joining in. The casual mode map pool will also be shaken up.

Adding to the game is the new Unranked mode. Not to be confused with Casual, this new mode will have all the same rules as Ranked, but without the pressure of losing your precious MMR. Ubisoft also touched on the latest paid cosmetics with the recently released Smoke Elite skin and the upcoming Mira Elite.

A pass for battle

Lastly, Rainbow Six Siege is getting a Battlepass. This will roll out in two stages. This season will feature a short, seven-day long battle pass to unlock accessories and lore. Dubbed the “Call me Harry” pass, it will be free for all players. Next season will feature a proper Battlepass complete with both free and premium paths to unlock cosmetics through gameplay. It’s not yet known if this will be included with the current Year Pass that is sold.

All of these changes will be available Monday, August 19th to the Test Servers and likely early September for the main game.

That just about sums it up. Are you excited for these new operators to shake up the meta? Let us know in the comments below. If you want to check out the rest of the changes in detail, you can find the full announcement recap here.