Bolivian cocaine, jokes about seeing your parents screwing, and a man dressed as a giant, dancing giraffe; it could only be Ubisoft’s E3 2016 press event. As with EA and Bethesda, there were plenty of PC-related announcements and trailers on offer. Here, then, is a summary of all of those things.

Things got off to a surreal and flamboyant start with dancing, Queen tracks, and the news that Just Dance 2017 would be making its way to the PC. If it comes with some of those actual outfits bundled in the box, then I’m sold.

From a performance that may have been fueled by suspicious substances, Ubisoft went right on ahead to talk about cocaine. Bolivian cocaine to be precise, and the Ghosts who are trying to put a stop to cartel activities. Yes, this was an extended look at some gameplay from Tom Clancy’s Ghost Recon: Wildlands. A game just one misplaced colon away from being called Tom Clancy’s Ghost: Recon Wildlands. We also got a release date of 7 March out of that bit. 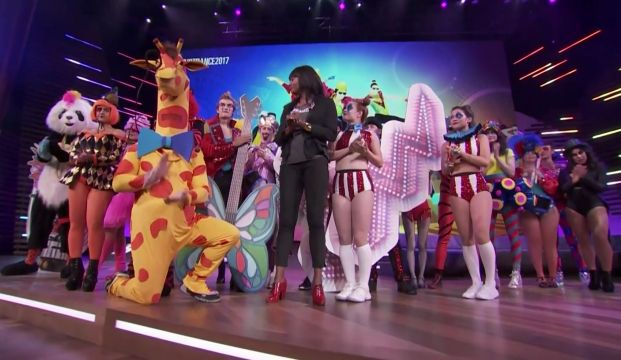 Then it was off to South Park, for a look inside The Fractured But Whole (nice). It was given a release date of 6 December, and a new trailer revealed the horrifying schism that has resulted in the kids fighting a superhero civil war (arguing over franchise plans, naturally).

A pair of expansions for The Division were trailed, and then For Honor showed up again with a bunch of Viking gameplay and plans to release on Valentine’s Day. This was followed by a sequel announcement for Grow Home called Grow Up. We also got a rather surprisingly Trials and Blood Dragon crossover that was available to buy on this very same day.

Ubisoft couldn’t have a conference without showing more Watch Dogs 2, which took the form of an infiltration gameplay video. And then things closed up with a longer look at a new, open world Alpine sports title called Steep. Although the big piles of white powder did make me wonder if we were back in videogame Bolivia for a moment.

Rainbow Six Siege will get cross-play and cross-progression support