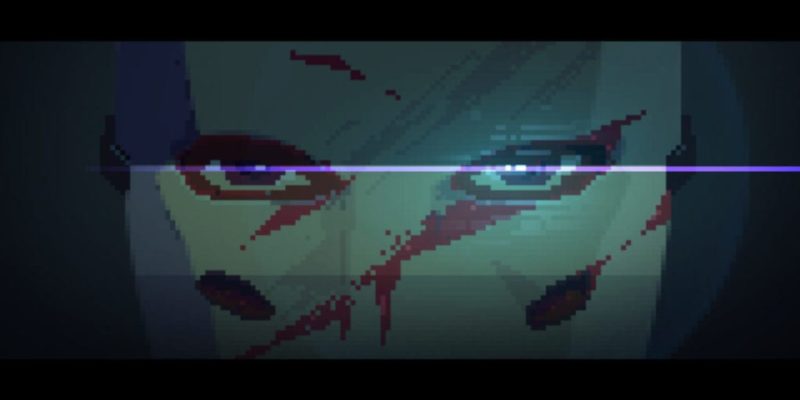 Welcome, delicious reader, to Castle Invasion. Please, look around! Examine the games! Stay for dinner! Although you won’t be eating…

Ahem. If you’ve read this site before, you’ll know that I’m a gigantic coward. Unfortunately, there are quite a lot of spooky (or at least spooky-themed) games which we didn’t review, and many of them are unknown enough that I want to point at them in an Unreviewed article. And then I’ll run screaming, because I’m a gigantic coward.

Not everything on this list is flat horror, but if you’re in the mood for something a little bit Halloween-y to occupy you on Annual Spookfest Night, you might want to have a gander at these games. And hey, most of them are at least slightly reduced on Steam right now! 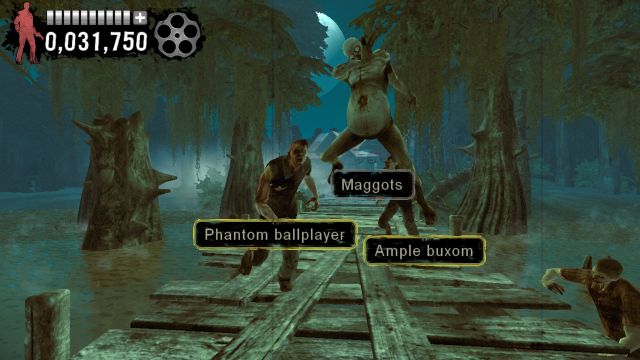 A few of these titles fit a fairly similar bill, and you might be wondering about some strange omissions. Costume Quest 2, for instance, is a very Halloween-y thing which we never reviewed, but I wanted to try and list some more esoteric games. We did videos on The Park, and we mention System Shock 2 all the time. Deadly Premonition? Outlast? The Typing of the Dead? Far too obvious, and The Last Door is fantastic, but I’m largely going for things a little more recent. So let’s have a look at a few games we haven’t mentioned much, eh?

The usual disclaimer applies, though: as ever, these aren’t reviews. I’ve finished a few of them, but these thoughts and recommendations are mostly based on fairly limited playtime. Do bear that in mind, won’t you? 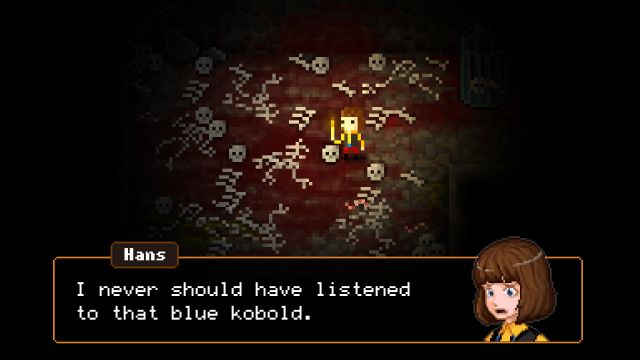 First up on this oh-so-spooky list is a game I played back in March and really wanted to talk about back then, but never found the opportunity. The Count Lucanor is a fairy tale of a game, in which you’re a young boy who leaves home to seek his fortune. Said boy finds himself in a castle where a lovely friendly kobold says that all the boy has to do to gain the castle and its treasure is to guess the kobold’s name. Clues to the name are spread throughout the castle. Easy money.

Other than the castle’s murderous guards, obviously. And hungry, carnivorous goats. And traps. And the fact that it’s too damn dark to see anything without laying down candles to make sure you can see your stalkers from a distance. And… well, saying more would ruin the surprise, but suffice to say, it’s that sort of fairy tale.

The Count Lucanor also works off a “very limited resources” system: you need to buy useful items, but you also need that money to save your game, and considering the difficulty of some of the rooms, saving matters. It’s rather clever in that I don’t think it’s actually possible to lose by wasting all of your resources, but you absolutely need to avoid saving if you want to explore some of the castle’s deepest secrets.

The English translation needs a bit of work and the slow pace of the protagonist makes the prologue a slog, but once it gets going, The Count Lucanor proves to be a lovely, creepy little stealth puzzler. Not a long one, but a decent way to while away a few hours in the spookiest of seasons.

Each “film” offers up a unique experience, despite the shared mechanics. But I’d hate to spoil them all, so…

The next few games on the list have all been clearly inspired by slasher movies, so if you prefer your horror to be more ghostly or psychological, I apologise. Although in fairness, Lakeview Cabin Collection takes its inspiration from so much that it’s a tad unfair to pigeonhole it like that.

Lakeview Cabin is divided into “films”, all of share basic mechanics: you control multiple characters. You have sod all idea of what’s going on. You will die many, many times, trying to figure out the best way to proceed.

Whether you’re relaxing in a cabin (and getting stalked by a serial killer), exploring a ruined manor (full of cannibals), wandering a neighbourhood on Halloween (which is haunted by an ancient evil), or hanging out on a space station (and fending off an incursion halfway between Alien and The Thing), all of these things remain the same. You swap between characters, you pick up items, you try to work out how the hell to use them, and you die a shitload while trying to solve the mysteries. Moreso, if you try to do it flawlessly.

They all play out differently – the first is pretty much preparing for and then winning a boss fight, while the third is more of a mind-boggling puzzler – but they pull from the best tropes of horror movies, and manage an effective blend of both comedy and horror. Yes, the killer leaping out at you might make you jump, 8-bit graphics be damned… but you’re going to laugh when you discover you can strip naked, or accidentally set yourself on fire, or blow yourself up by crashing a bike. Creepier than you might expect, but it’s a varied and entertaining take on trial-and-error gameplay with a lot of variation in how each “film” plays. 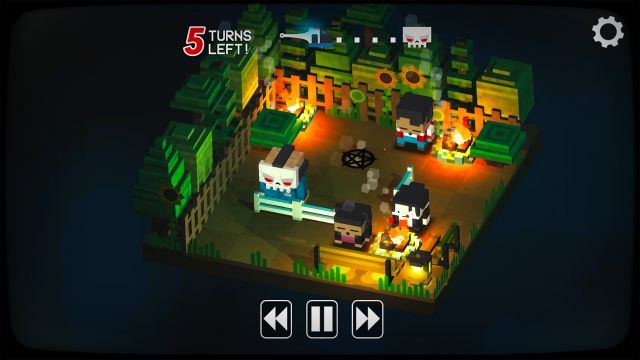 Don’t be fooled by the looks: Slayaway Camp gets bastard hard before too long.

Let’s take a break from the actual horror and move onto something that uses the typical tropes a little differently, shall we? Slayaway Camp also pulls its inspiration from slasher flicks and video nasties, but it does so to create a smart, bloody, and amusing brain-teaser. No scares here.

Slayaway Camp is, genuinely, a puzzle game: it just uses horror tropes to create a unique setting. You’re a terrifying serial killer, and it’s your job to murder the hell out of the annoying teenagers in each level and then make your way to the exit. The catch is that the floor is basically ice, and whenever you start moving in a direction, you’ll only stop when you hit an obstacle. Better hope that there aren’t any landmines in the way.

Everything’s got a lovely papercraft look, and there are plenty of ludicrously over-the-top kills to unlock. Yes, you can just do a stabbing, but it’s much more entertaining to finally solve that one level and be rewarded with your chosen mass-murderer turning a teenager into an origami swan, or slowly trying to run them over with a street sweeper.

Nonetheless, I repeat that this is a puzzle game, and it gets really hard – particularly when you need to manipulate the movement of multiple people, in the right order, to get to the areas you need. If you don’t fancy spending your hard-murdered coins on new finishing moves and the like then you can use them to buy hints or solutions to any puzzles you get stuck on, but come on, that’s cheating. 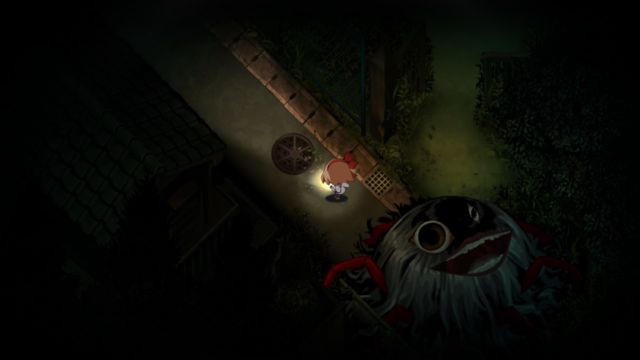 WHAT THE FUCK IS THAAAAAAT

This has been on my list of games to play since before it came out, and when plotting out this article, I decided to finally dive into it. A startling mix of cute and genuinely goddamn horrible, it’s evocative of free horror “RPGs” like Mad Father and Misao, only with the production values ramped way past what you’d expect from those. A gorgeous art style, beautiful animation, and greater freedom of movement mark this out as something a little bit different to those.

Yomawari casts you as a young girl searching for her missing sister in the streets of her town. Unfortunately, said streets are occupied with all manner of horrific monsters, who want nothing more than to murder you. Your only defenses are items you can hurl to distract them, a flashlight that highlights them (oh yes: they’re basically invisible when not directly illuminated), and the abilities to sprint, tip-toe, and hide. Hiding means closing your eyes, though…

I could do without the sudden, half-second, full-screen jumpscares, but the creepy atmosphere and sterling monster design has me wanting to play this more. Also, it has the bleakest tutorial I’ve seen in a long time. I haven’t played much just yet, but I like this rather a lot.

The one minor problem is that the framerate was pretty awful for me, but updating the game to the public beta branch fixed this. So, hooray! 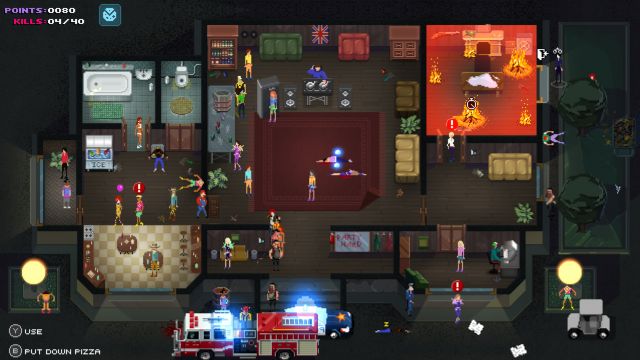 The final slasher-inspired game on our list reverses the usual tropes: rather than running from a psychopath, you are the psychopath. As a very annoyed man who just wants to get some sleep, it’s up to you to murder every single person in the noisy party next door. And then move onto other parties, because why not?

It’s a semi-randomised stealth/puzzler in which you need to kill every living person on the stage, but ideally without being spotted. If people find corpses, they’ll call the cops. If they see you near a corpse, they’ll call the cops to arrest you (although this can also work against them, because this goes for anyone near corpses). Too many corpses, and they themselves might snap and go a little berserk. You need the traps littering each level as well as a solid sense of timing in order to succeed.

It’s not a particularly Halloween-y game (barring the free DLC level that casts you as a vampire hunter infiltrating a castle and definitely does not reference everything from Vampire Hunter D to Hellsing) but the slasher theme marks it out for inclusion here. Also, you can kill people with horses. Levels get a little tedious towards the end when you’ve used all the traps available and are just waiting for people to wander far enough, but if Michael Myers taught me anything, it’s that patience is of the utmost importance for anyone who wants to star in a slasher flick. 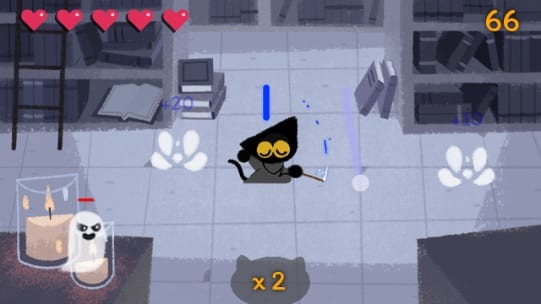 It’s free and will take about 10 minutes. Do it. Especially after looking at that bloody Yomawari screenshot.

So you’ve made it through all the scares and horror, and you want something a little lighter. Well, I have no Costume Quest for you, but I do have Google’s free little ghost-busting game in which a cat takes on spooky ghosts by drawing lines.

Magic Cat Academy is free, short, adorable, and in your browser. Ghosts move towards your kitty protagonist. You draw the shapes above their heads – vertical or horizontal lines, carets pointing up or down, and lightning bolts – to banish them. That’s it.

Yes, okay, it’s simple, but I’ve spent some time with friends trying to beat each others’ scores. It won’t keep you occupied for long, but if you need a cooldown from the ghouls of more serious games, I can’t think of anything better.