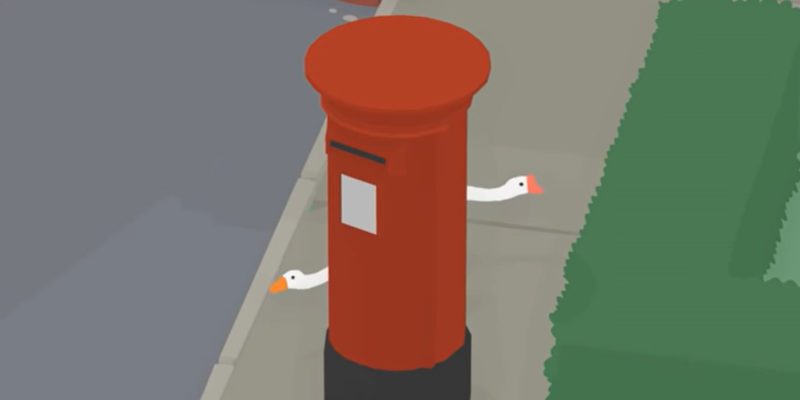 No, they are not officially calling it the Untitled Geese Game now, but you will be able to bring a friend along with you to terrorize the neighborhood soon. The Untitled Goose Game co-op update will arrive on September 23, and developer House House will bring the game to Steam and itch.io for the first time as well. This makes it a great time to check the game out for the first time or return with a friend.

The co-op update is primarily geared towards the addition of the second goose character, which is worth talking about briefly. The newest bird in Untitled Goose Game has a few distinguishing features to help set it apart from the original character. Players will notice that it is accentuated with a deeper red colored beak and feet. It also has a basal knob at the base of the beak, which makes it appear larger.

Hardcore goose players may also recall the red bow that could be obtained by the original goose. In co-op mode, there will be a blue bow for new character, which will be additionally handy for telling each other apart. Along with the differing physical characteristics, the new bird also has a unique honk. Go ahead and try it out.

Little reminder: one week until two-player is out, along with the Steam and Itch release.https://t.co/mLLf8rWG4b

Also: the new goose has a new honk. pic.twitter.com/bxCqGz3Wq9

Gameplay wise, it looks like co-op mode for Untitled Goose Game will perform generally well. Players will be able to wreak twice the havoc as usual and can team up to troll unwitting AI. Of course, they will try to compensate, but the game should become generally easier as a result. However this game has always excelled at its ability to entertain. As we can see by the trailer, two geese make for twice the laughs.

Untitled Goose Game is a hilarious and charming light puzzler that even won a game of the year award, and this update should add even more value to the experience. We put our own resident troll Tim McDonald up to the task of reviewing it, and he found that “Charging up to someone wings flapping and then honking at them so that they fall on their arse in surprise is joyous because I’m a complete jerk.” However, one of his major complaints was the lack of co-op. He felt it was a great social experience in need of social features. Now that box is finally checked.