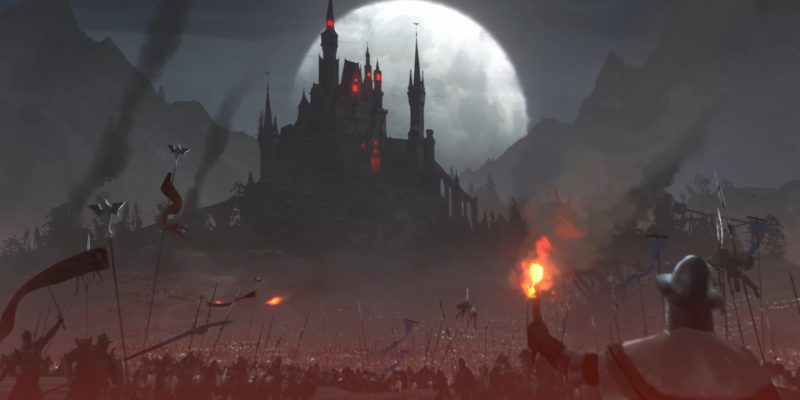 After watching the first two seasons of Netflix’s Castelvania, you may wonder what it must be like to be your very own vampire lord. Well, so has Swedish developer Stunlock Studios, which is attempting to bring that desire to life. Announced by the studio today, V Rising is an open-world survival game where you play as a fallen vampire attempting to rebuild their mighty empire.

V Rising begins centuries after you reawaken from your death-like slumber. Before entering your uneasy rest, mankind had risen up against you and your ilk. Vampires were defeated, and you stowed yourself away for hundreds of years, waiting for your chance to return.

Naturally, you won’t start off in V Rising at the peak of strength. Weakened from hunger, you have to seek out nearby human villages to quench your thirst. You must rebuild your castle and convert the hapless human cattle onto your side while avoiding the sun’s deadly rays.

This is an online open-world game, where other players become either allies or foes. You can play the game solo, or team up with a friend and create a clan of bloodsuckers together.

Rising from the ashes

It’ll be beneficial to form an alliance. V Rising is a PvP and PvE game, where players and supernatural creatures clash against you and your efforts. It’s not clear yet if you fight against other vampire players or if they can play as humans. But based on the game’s description, it sounds like there will be you and many other vampire lords looking to claim the vast, open land.

That aforementioned nod to Castlevania wasn’t random, by the way. The team itself really was influenced by the Castlevania show when it came to the creation of V Rising.

“The team took inspiration from everything from classic gothic horror literature to Netflix’s Castlevania to create a world of conflict where vampires, humans, and mythical beasts co-exist in a delicate balance,” said Johan Ilves, marketing director at Stunlock Studios in a press release.  “We want to give players the full vampire experience of avoiding the burning sunlight, hunting for blood, and building their castle. All this while competing against other players and being tracked by vampire hunters.”
V Rising doesn’t have a release date yet, but it’s heading to PC via Steam. A playable beta is planned for later in 2021.