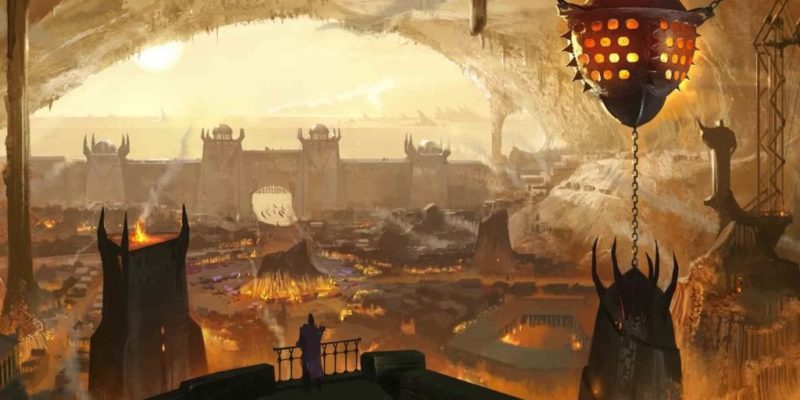 Rome was a terribly advanced but also just deeply terrible empire. It fell. But what if it had fallen because the gods grew extremely disappointed with the stuff it did and stepped down to the mortal world to kick it to pieces? Then we’d all be living in something akin to the world of Vagrus – The Riven Realms.

The continent of Xeryn was ruled by the Empire – a generic name for fantasy super Rome. The Empire had entered a period of stagnation and decline, which it spent oppressing people both local and foreign, strip-mining for resources, doing debauchery and genocide – you know, bad stuff. Eventually, the gods became angry at this stuff being done in their name. The event that nearly wiped everything out is known as the Calamity. Now, the world lies abandoned by the old gods. The New Empire is barely more than a wasteland dotted by nearly-isolated towns and villages. Trade and travel are accomplished by vagrus-led caravans. You’re going to be the leader of one such comitatus. 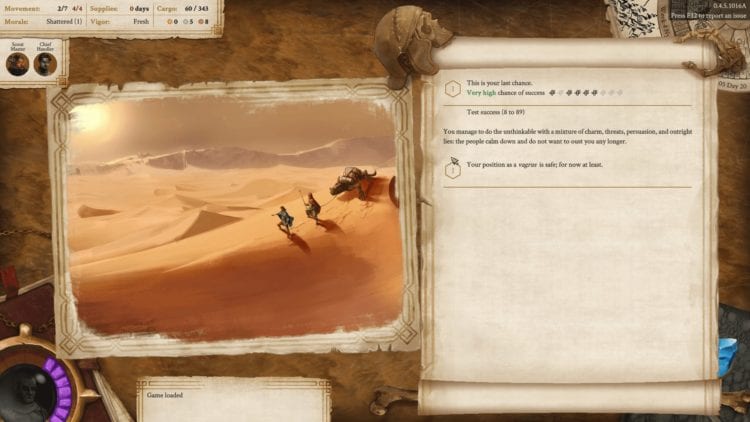 None of this is even vaguely Russian, get it? GET IT?

And while the backstory of Vagrus makes it sound a lot like Age of Decadence, there are some differences. In Age of Decadence, the ruin was brought by an apocalyptic war and magic is mostly just forgotten technology (that might actually be magical at some point). Vagrus, however, is a fantasy game through and through – and you’ll notice it as soon as you meet your first orc. However, as befitting its grim tone, it’s a low magic setting, in that wizards aren’t just milling around everywhere as they would be in Dungeons and Dragons.

A vagrus in a time of darkness

Currently, Vagrus is some ways away from the beta status (you can see the tracker on their website). Thus, open play isn’t accessible. Instead, you can play the tutorial adventure, The Pilgrims of the Wasteland, which will introduce you to both the world and gameplay concepts by following the steps of a doomed comitatus. Eventually, you’ll be able to just skip the tutorial and go straight ahead with dooming a convoy of your own as a freshly-generated vagrus. 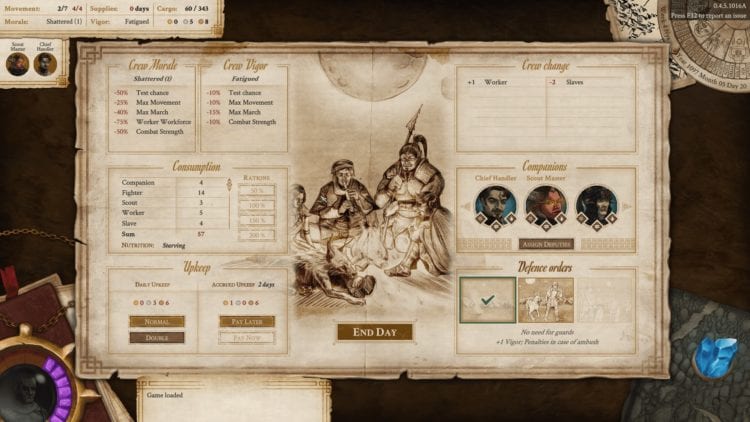 As a leader of a trade convoy, you’ll spend a lot of time staring at the map and moving along a mesh of connected nodes. There’s a movement point cost for traveling between said nodes, usually at around 5 points. A well-stocked, rested and invigorated comitatus can do around 14 per day, with an additional 6 or so in a forced march. A demoralized and famished convoy can do about 5. You want to stay on the hale and hearty part of that equation.

At the end of each day (i.e., when you’ve exhausted your movement points), you will want to make camp and rest. That’s when you’ll most often interface with the running of your comitatus. Here you will decide how to ration food, whether you pay your team now or later (fantasy people like to be paid daily), whether to post guards or let everyone sleep, and so on. This will also give you a chance to chat with your companions, heal them, and do other assorted bits of upkeep. 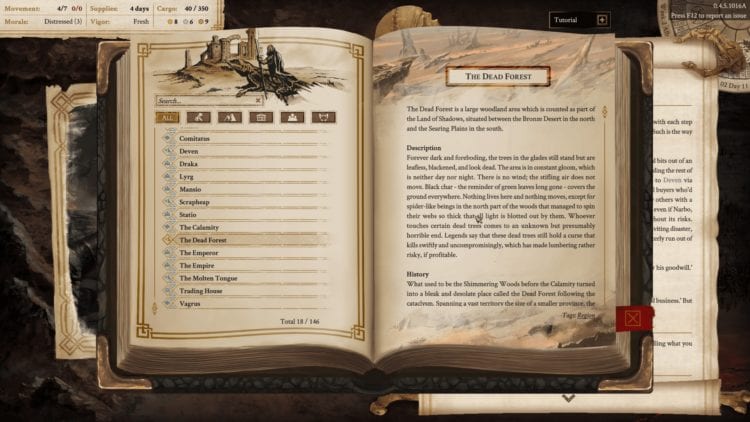 Take a break from all the reading with some more reading.

Literacy is next to murder-cy

New-gods-that-are-just-extremely-magically-powerful-beings-that-replaced-old-ones-like-pretenders-in-Dominions willing, you will reach a town or city, which is an area tightly controlled by text adventure. Anything other than simple shopping or comitatus management will be done via text, dialogue choices, and some behind-the-scenes dice rolls. You may visit temples and officials for quests or more mundane business, wander the city in hopes of running into interesting stuff, and so on. That’s how the plot moves forward. Basically every important decision you make in the game – be it something you sought out in a city, a random encounter in the wastes, or a pre-battle sequence – is handled via text adventure. Good thing the writing is up to snuff!

On the more mechanical side of Vagrus, you will buy goods to transport; sell, hire, and fire workers, slaves (like workers, but not paid), scouts, and warriors; and upgrade your gear. The comitatus has several equipment slots, representing stuff attached to your beasts of burden, and each city may sell something that, well, slots into those slots. Various such tools may improve movement rate, rest efficiency, and so on. 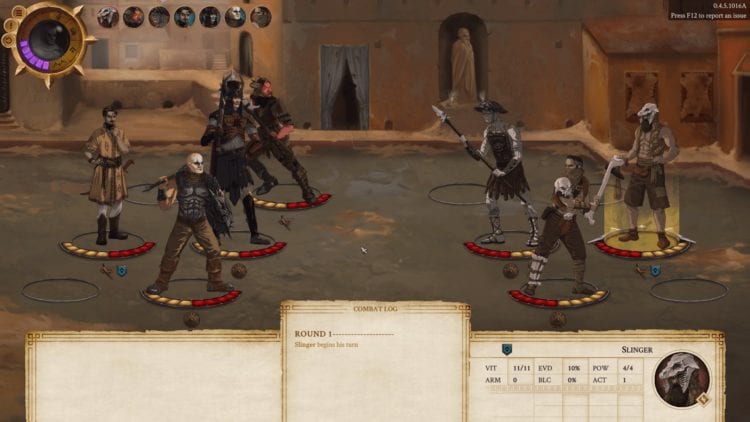 Workers and slaves are necessary to haul your cargo, of course. The paradigm of trading in video games – buy low, sell high – holds true here as well as anywhere else. You can also purchase the local rumors, which may tell you what some nearby settlements are buying or selling (did you know that some fire-spirit worshipping town would like to get some wood for the spirits to burn?) or where you can find various quest-related encounters in the wild. You may also take on passengers, which appreciate a speedy delivery to their destination, and trade news. The Internet does not exist in Vagrus, so people appreciate you carrying the freshest gossip between settlements.

Actually, “carrying the news” is just a small bonus income for not tarrying too much between destinations.

Of course, Vagrus takes place in a fantasy post-apocalyptic world, and things invariably go south from time to time. That’s why you will have to engage in battle. Sadly, your warriors only seem to matter in the text-adventure run-up to the fight. When it comes to actually trading blows in a turn-based manner, only your companions (as well as any script-mandated friends) will take to the field. The vagrus himself is more of a Heroes III-type leader, staying on the sidelines, rooting for his team, and unleashing an ability now and then. 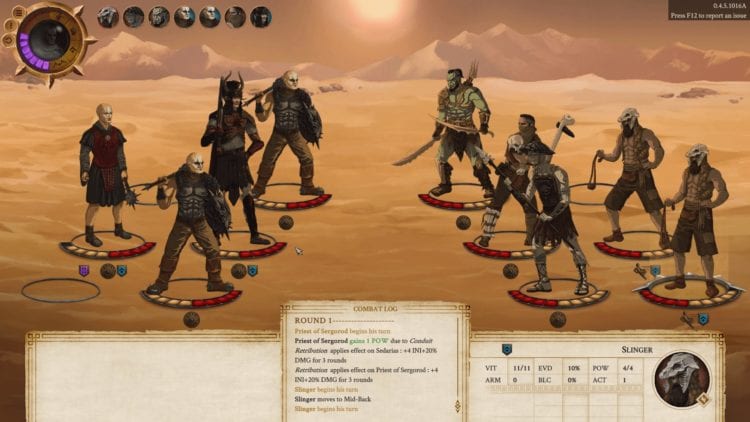 We’re the obvious good guys on the left.

The battles in Vagrus are not set on actual maps. Your soldiers are arrayed in two rows of three on the left, with the enemy on the right. A troop can usually attack only the enemy in the front row, in the slot opposite of his and to either side of the target. That means that a soldier on the flank will be able to attack only two foes. It also means that it will only be in danger from only two enemies.

An exception to this arises when archers or other ranged attackers come into play. These live in the backline and hope that the front-liners will protect them from other melee-oriented dudes.

Each warrior – companions and enemies both – has several abilities to choose from. You can only do one action a turn – this includes movement from one slot to the other. However, some combat abilities may allow you to move as well as attack, or force the enemy to move. It’s all very Disciples II, though I don’t remember if positioning mattered that much in that game. 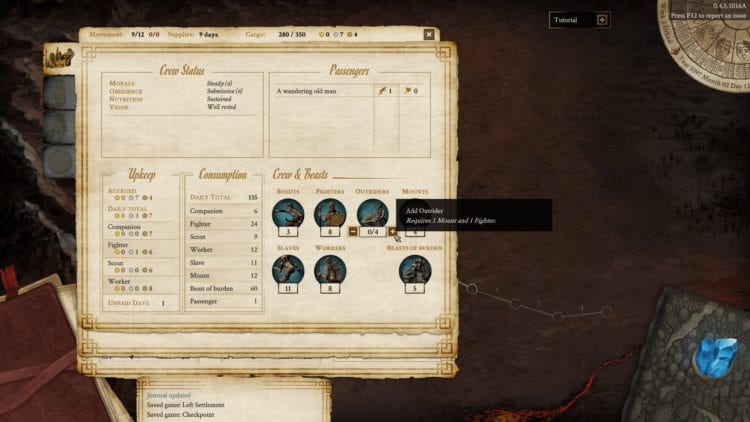 And that’s how an outrider is formed!

The rest of it is pretty simple. If you hit, you deal damage reduced by armor. You need power points to use your powerful abilities and health points to stay alive. Companions that run out of health collapse, and enemies can still attack them to take them out of the fight permanently (and maybe cause grievous injuries and death once you’re back in the map-realm). Your opponents get no such second chance and just fade away when killed.

All in all, battles in Vagrus are straight-forward, if not entirely fast. You don’t have to bother with stuff like health and armor depletion (like you would in Banner Saga and Ash of Gods) impacting your performance. However, your attacks may miss, and you may be dealing paltry amounts of damage from turn to turn. Kind of unavoidable in any game that has RNG in it.

The beauty of the end of the world

Thankfully, Vagrus is already a pretty game. The designers eschewed 3D entirely, with 2D paintings filling the gaps that text doesn’t. The character models and animations in combat could be better, as the faces sometimes betray the budget limitations. But, as I said, the game looks great most of the time, and the interface is nice and easy to navigate. Audio is somewhat less impressive, but since I have nothing to complain about, I take it as a plus. You can’t always expect to find audio that doesn’t detract from the experience in a non-AAA game.

In the end, one can do nothing else but wait for the full version of Vagrus – The Riven Realms. I’m curious to see how the final product will turn out when your comitatus is free to go wherever and do whatever shady business it desires. The current Pilgrims of the Wasteland campaign is an interesting 10-hour(ish) experience, but I want to experience it all in full.

Diablo IV release date: It is very, very far away

Overwatch 2 release date: What we know so far

By Tim McDonald8 hours ago
Previews

Out of Line preview — Through our bleeding, we are one