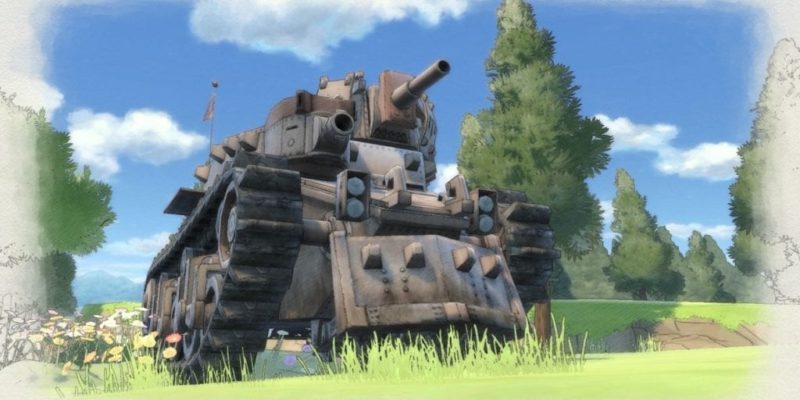 First and foremost is a diversity of terrain. In Valkyria Chronicles 4, players will fight enemy armies across a series of different fronts. Battles occur on war-torn fields, idyllic countrysides, and even frigid arctic tundras. Although the addition of new environments seems doesn’t seem that notable, there’s little doubt that the different locations will drastically change how players approach battles.

Bombs away in Valkyria Chronicles 4

One of the most exciting new features is The Centurion. This massive gunship can turn the tide of battle in a matter of seconds. Players can call on The Centurion for bombing runs, which pin down and destroy entrenched foes. In the trailer, The Centurion targets a cluster of Federation forces and fires massive guns at them. It’s a sight to behold, and the damage is nothing if not impressive.

Valkyria Chronicles 4 also introduces a new character class. Grenadiers haul portable mortars onto the battlefield, which they can then set up and launch at enemy troops. As a mobile bombing unit, Grenadiers seem highly valuable. But, they’re also a constant threat. The Empire, Valkyria Chronicle 4′s imposing enemy army, also utilizes Grenadiers. It’s best to avoid their mortars at all costs.

Fortunately, losing all of your hit points doesn’t necessarily mean game over. Valkyria Chronicles 4 introduces the “Last Stand” feature. When either Claude or Riley — the game’s main characters — are on the brink of death, Last Stand allows them a second chance at life. It seems exceptionally useful, especially during pitched battles.

The new additions make Valkyria Chronicles 4 sound like the most complete entry in the series. There’s something for everyone. The Centurion and Grenadier soldiers appeal to strategic-minded players. Last Stand lets soldiers be a bit more aggressive. And the new environments spice up an already beautiful game. Valkyria Chronicles 4 lands on Steam September 25.