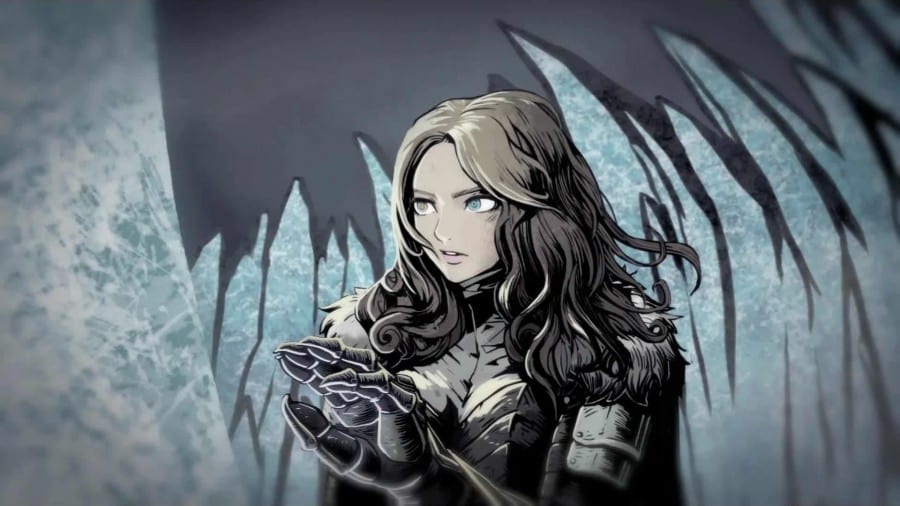 I headed out to a strange, frozen wasteland. I knew I was getting close to a dangerous boss encounter and, just as it was within my reach, my heroine died. Suddenly, I was whisked off back to town. On my next retry, after learning more about the game’s mechanics and avoiding clumsy mistakes, I finally completed this task. This is what Vambrace: Cold Soul brings to the table, a uniquely endearing take on the roguelike genre from makers Devespresso Games and publisher Headup Games. It can, however, be a challenge. It’s not due to the difficulty, but because of unintuitive mechanics and systems.

Vambrace: Cold Soul takes place in the land of Icenaire, a frigid wasteland under the vice grip of the King of Shades. This eternal winter has frozen almost every inhabitant on the surface, leading survivors to band together in the underground city of Dalearch.

You are Evelia Lyric, an adventuress in looking to solve the mystery left behind by her father. Lyric also holds the key to ending this madness: The titular vambrace which has the power to break through magic barriers of frost. As you progress through the story, you’ll meet a diverse cast of characters, and you’ll experience a few plot twists along the way.

The narrative isn’t Vambrace: Cold Soul’s strongest suit. The game, early on, already suffers from too much exposition, bombarding you with info about civil wars, dark lords, and ancient magic. Sadly, everything feels disjointed and uneven. You’ll probably need to finish a couple of chapters until everything makes sense and coalesces into a cohesive story. When business does pick up, then it never stops. There’s even a chapter when all hell breaks loose. 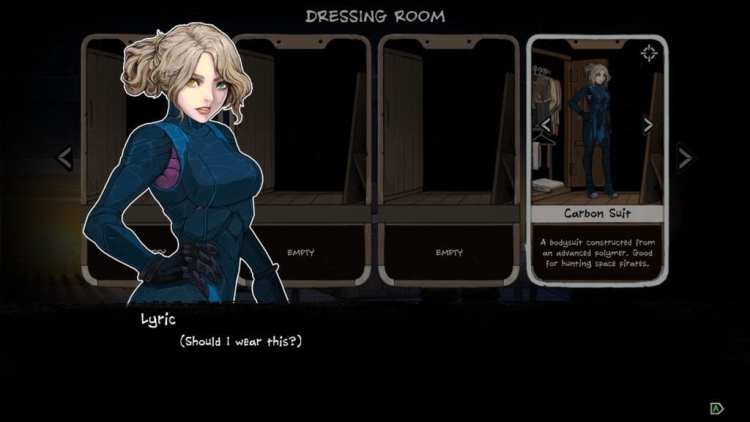 The story might not be Vambrace: Cold Soul’s strongest suit, but, hey, at least you get to wear something like Samus’ Zero Suit, right? Yes, you can change Lyric’s attire in the game, and there are over a dozen to choose from.

What Vambrace: Cold Soul captures exceptionally well, though, are the bitter and harsh environs, mixed with some fantasy and anime tropes. Dalearch’s denizens include humans, dwarves, elves, drow, and furries. (Okay, kitsune then, fox people — fox people with Korean names who sell poultices and trinkets.)

The art design is wonderfully crafted, drawing you in and mesmerizing you. From character expressions during dialogue (with some Final Fantasy references and old-school RPG takes including overworld locations akin to JRPGs of yore), floating specters while exploring, and unique rooms filled with all sorts of horrors, there’s a lot to admire.

The depiction of your heroine and allies can be a tad bit whimsical but they do look and feel unique. Meanwhile, the enemies and the areas themselves might remind you of Darkest Dungeon’s grim and gothic design, mixed with Frostpunk’s or Fade to Silence’s settings. Indeed, the combat (which I’ll get to in a minute), will be reminiscent of what Darkest Dungeon offered. 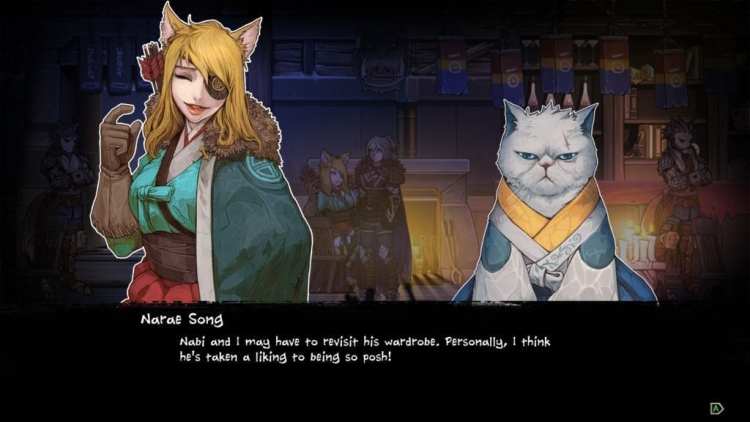 When Lyric sets off from Dalearch, she’ll have to bring a band of adventurers with her. These hapless mortals will be gone for good should they fall in battle or during exploration. Your recruits come from several classes and races in Vambrace: Cold Soul, each with their unique attacks and flourish (special attacks). They also have certain stat lines to take note of.

The downside is that you won’t actually get to see what these are until you dismiss an adventurer to hire a new one. You don’t get to inspect characters prior to recruitment. In fact, a couple of my mishaps occurred early in the game since my party wasn’t up to snuff. I had to back in and out of the first dungeon to recruit new party members, test out their skills, and see if they’re viable.

You also can’t build up your recruits the way you’d want to other than giving them relics (equipment) to increase their stats or change their special attack. Only Lyric actually “levels up,” and you can choose her stat perks. This might mean not having an attachment to your party members since they serve no purpose other than being backup. 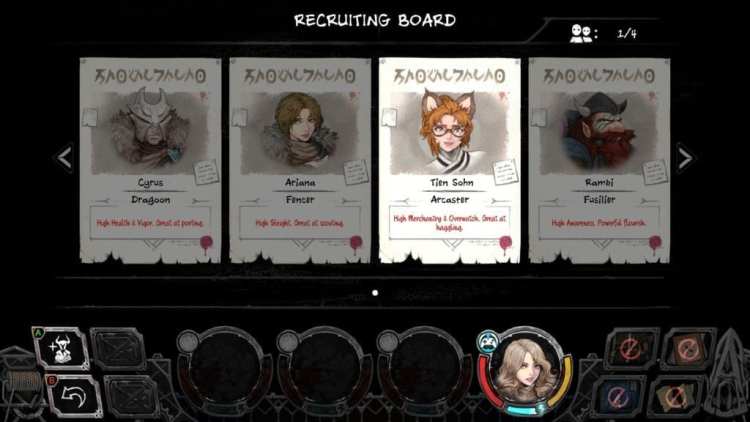 You won’t get to see character stats or abilities at all unless you recruit them. This was when I just started the game. Imagine having a full party and having to get rid of a couple of people just to see what new recruits/classes might provide.

It’s not just the skill tooltips missing prior to recruitment, even the keyboard layouts aren’t shown! I ended up guessing which keys correspond to certain actions since the gamepad buttons are the ones that are visible.

You also won’t be able to make changes to either your keyboard or gamepad layouts. If you’re like me who’s still used to pressing the D-pad during selection, then be forewarned. In Vambrace: Cold Soul, you’ll have to use the analog stick when looking at the menu, and even one D-pad button made me accidentally escape combat with my characters a few times even though I only wanted to pick a different action.

Vambrace: Cold Soul even has several pages detailing the lore and backstory. What’s conspicuously absent are the tutorials and tips that you only get to see once. 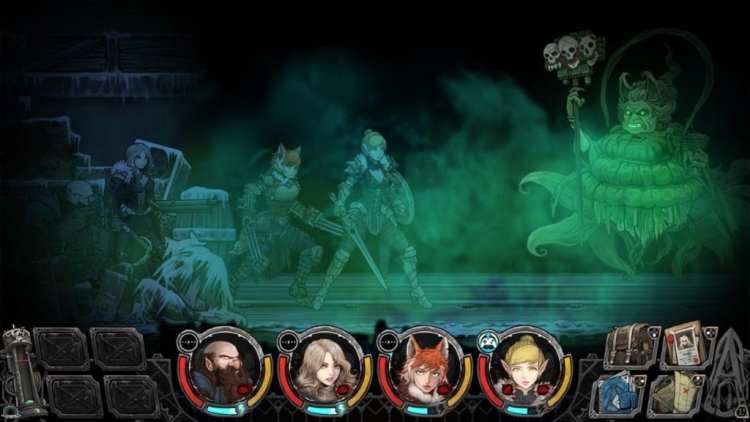 You don’t want to accidentally have your characters run away from a battle. I swore not to use my controller again after several unfortunate instances.

“E” Is For Extermination?

As for combat, as mentioned, Vambrace: Cold Soul’s mechanics take inspiration from Darkest Dungeon. Your team is arrayed against another set of combatants — wraiths, beasts, skeletons, scavengers, golems, eldritch horrors, and more. Your characters and enemies take turns beating each other to a pulp using short-range, mid-range, or long-range attacks. Each class will have a certain attack range that’ll be able to hit specific enemies based on their positioning from left to right.

Unfortunately, since you only have one type of attack and using a flourish requires a bit of charging, you’ll be spamming “E” for that regular attack more often than not. Heck, most of my time was spent just pressing “E” for attacking, looting items, and opening doors. It does get egregiously repetitive after a while.

The various maps, though, are a joy to explore. Each chapter or dungeon has several sections, and each section is comprised of various rooms. The key is to make it to the exit, but there are numerous incidents that can help or hinder your journey. 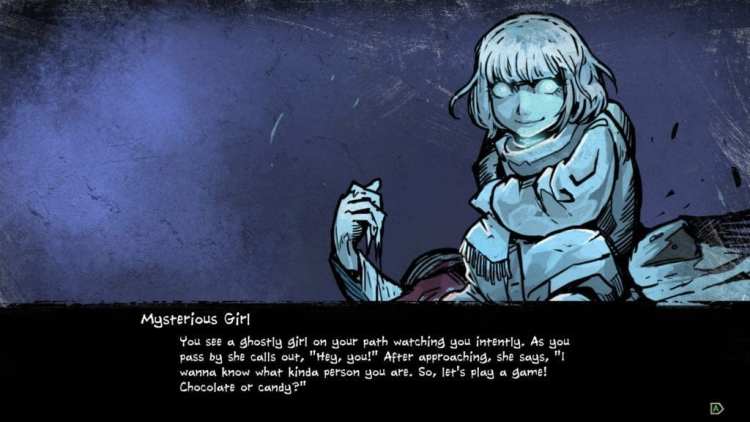 Some encounters can be a tad creepy as well such meeting the spirit of this child.

“E” Is For Exploration?

A majority of rooms will have an encounter with monsters. Others, though, may have loads of treasures, a wandering shade merchant, a camp where you can restore health and use items, or random encounters. The latter can confer both blessings and harm to your team. Also, most rooms will also have traps which can heavily damage you if you don’t have the awareness stat to detect them.

You also have to beware of the “Geistometer” or your “terror level.” Once it crosses a certain threshold, all rooms will lose whatever content they should have, replaced solely by battles against otherworldly beings. Imagine being low on health or supplies, hoping to find a camp or a merchant, and then the green mist changes all rooms to only have fights instead.

Do note that you can leave the dungeons at any time, keeping the loot you’ve collected but resetting your progress for that area. You might need to take a breather every now and then since moving from room to room in dungeons can be painfully slow. 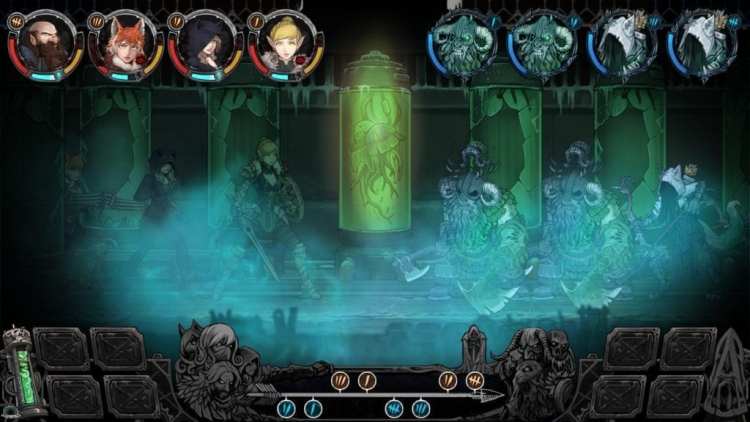 Accumulating terror, symbolized by the green mist and your Geistometer, will lead to enemy encounters in every room. It’s also a good way to farm for ectoplasm which you need for crafting.

I’ve already mentioned a few issues with the UI not being user-friendly as well as combat being quite simplistic. I can also add how certain stats such as merchantry (item prices) and sleight (chance to open chests) aren’t even too necessary. There were also scripted sequences which would suddenly have Lyric (a ranged character) switch to the front of your team, making her more vulnerable, and there’s a good chance you won’t realize it until it’s too late.

Lastly, one issue to take note of is that saving might not be too reliable at times. On a couple of occasions, I thought my save file got corrupted since it won’t load anymore. Apparently, this was because of closing the game unexpectedly. I had to get in touch with the team from Devespresso Games to see if a hotfix could be applied while I was reviewing the game. Thankfully, they were very helpful and receptive, and I’ve been told that these issues have been fixed.

As I finished Lyric’s journey, I realized that Vambrace: Cold Soul does have a lot to offer for fans of the roguelike genre. I found myself thoroughly invested, eager to see what the next chapter would bring. Difficulty-wise, it’s very accessible. The main challenge existed early in the game and halfway through. The former is just when you’re learning the quirks and finding out the team composition that suits you, and the latter is when things get too hectic.

Vambrace: Cold Soul has all the right ingredients to make for a surprisingly engaging and memorable playthrough. Still, it does have some glaring flaws, with combat and character systems that aren’t as deep as the game that it took inspiration from.

If you ended up getting Vambrace: Cold Soul, then don’t forget to check out our survival guide as well.

Vambrace: Cold Soul is an engaging and intriguing offering for roguelike fans, mixing fantasy, anime, and horror. Unfortunately, barebones combat and a somewhat inconvenient user interface can hamper your enjoyment.