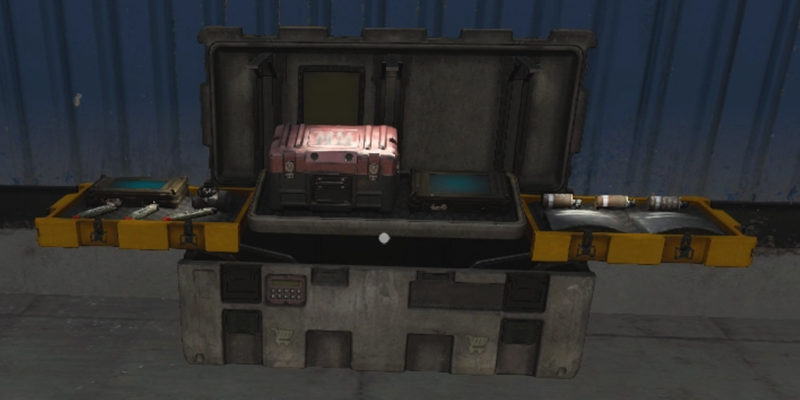 Unlike many other battle royales, Call of Duty Warzone isn’t solely a game focused on what weapons you can loot and pilfer. Instead, you can benefit greatly from accumulating in-game wealth and spending it at Buy Stations. These stations are spread out across the map, and provide you with many choices of equipment to spend their hard-earned money on.

First things first, stop buying Shield Turrets and Gas Masks. Gas masks can have some uses in the late gate but the Shield Turret is truly irredeemable. Its first issue is that it requires manual use, rather than utilizing A.I aim like the Sentry Gun. Also, it’s stationary, not remote, so you’ll need to set up and stick to a single spot.

Staying in one spot makes you predictable and easy to flush out with grenades. Even if it could move, it’d still be useless. Unbelievably, Infinity Ward decided to make the Shield Turret show up on the mini-map when deployed. If all that isn’t enough, it doesn’t even deal that much damage and the shield is relatively small. 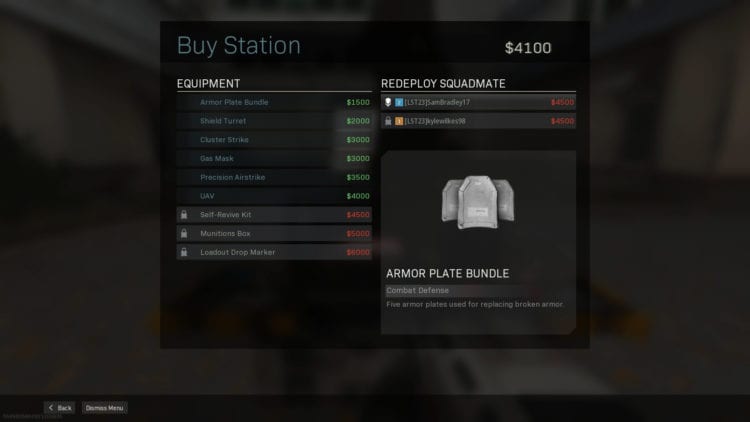 As for Gas Masks, they do serve a purpose but aren’t generally worth picking up from Buy Stations. There are two reasons for this: firstly, they aren’t overly hard to find by just looting or finishing missions, and secondly, in their current state, Gas Masks are often more detrimental than useful.

Gas Masks are deployed automatically when you either enter or leave the gas outside of the zone. When the animation of you putting it on or taking it off happens, you can’t shoot or aim. This hard, self-inflicted stun is disastrous near the end of the game when missing an opportunity to shoot can get you killed.

So you know what not to buy, but what should be your opening act? Without a doubt, loadouts are the best single thing you can buy in Warzone. They provide both perks and optimally equipped weapons, suited to your tastes.

The most important part of a loadout is definitely the perks you get from them. Having the ability to stay off UAVs, know when you’re being aimed at, revive faster, or run longer are all invaluable tools on your path to victory. Perks have always been strong in Call of Duty, but when many squads around you don’t have their own yet, they become even stronger. This is why buying a loadout quickly is a must-do. It allows you to take early, aggressive team fights with the confidence you can win them. 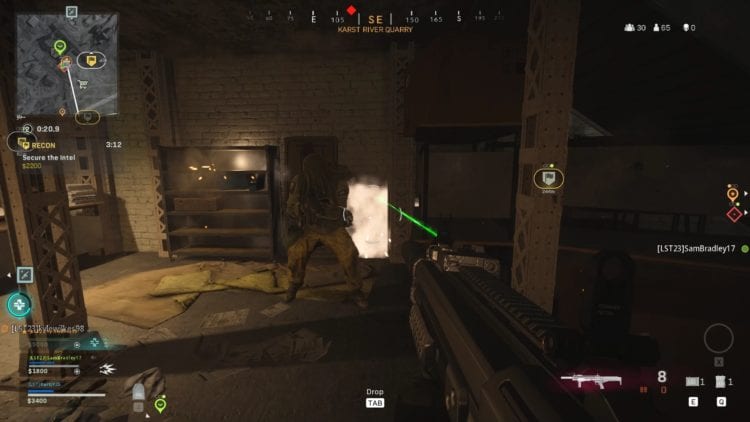 Without my loadout, I wouldn’t have been able to push this guy with confidence. Since I got my custom R9-0 shotgun, I knew he didn’t stand a chance at close range.

The primary weapons that Buy Station loadouts provide shouldn’t be underappreciated either. While not as important as the perks, being able to use your own weapons does have its obvious benefits. You’re more used to the gun, you can deliberately select meta weapons, and attachments not found on looted weapons like thermal scopes become accessible.

Some of these attachments like the PKM’s 25.9” Heavy Barrel can transform a gun from average to top-tier. As a general rule, anything that increases effective range is worth using in Warzone. This includes Monolithic Suppressors, longer barrels, and grips that reduce recoil.

Keep in mind that loadouts don’t always come gifted with ammo. Therefore, if you have some funds lying around, purchasing a Munitions Box can be a decent option. It’s still better to just loot ammo, but if you are desperate, spending the $5000 might be necessary.

The bigger, the better

Offensive killstreaks in Warzone are extremely hit-or-miss depending on your luck. I’ve had instances where I’ve placed them off-target and gotten team wipes. Equally, there have been times where I’ve directly bombed a nearby squad and they don’t even get scratched. Considering this, it’s debatable if they are worth it but I think their potential for huge plays outweighs their obvious flaws.

As for which one you should pick, it depends on what you are planning to attack. The Cluster Strike covers a rounded area with semi-random missiles, taking just short of six seconds to land from when you call it in. It lasts for 10 seconds and can be used to shut down an entire area. This is a very strong option in the late game where space is limited. 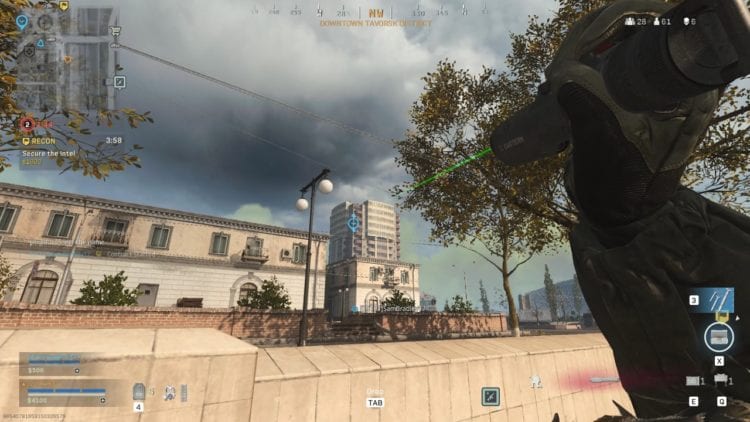 The poor squad on top of this roof didn’t know what was coming.

Alternatively, the Precision Airstrike takes just over six seconds to arrive and lasts just five seconds. However, the damage applied is significantly more focused meaning if you land it on top of a team, they will usually die before they can react.

Unlike the Cluster Strike, its damage is instead dealt in a long rectangle area. This makes it great for clearing on open, narrow areas like rooftops. Bizarrely, you cannot aim what direction a Precision Airstrike comes in from. Instead, the game will automatically try to figure out the best direction for you.

Most of the time in Warzone you are better off with a Cluster Strike. They are both priced similarly from the Buy Station but the Cluster Strike is marginally cheaper and tends to get more value. The exception to this is Downtown where you can easily airstrike the many squads that choose to camp rooftops.

However, without a doubt, the best killstreak award in Warzone is the UAV. This is nothing new to Call of Duty, as the UAV has been a staple of overpowered killstreaks since the original Modern Warfare. But in Warzone, the UAV is even better than before thanks to a couple of factors.

The biggest bonus is the impressive range that the UAV can reach. From my testing, it appears UAVs have roughly a 100m range, although I have seen it stretch out to 125m on occasion. This is more than big enough to scout out the majority of small towns and even Warzone’s largest buildings. 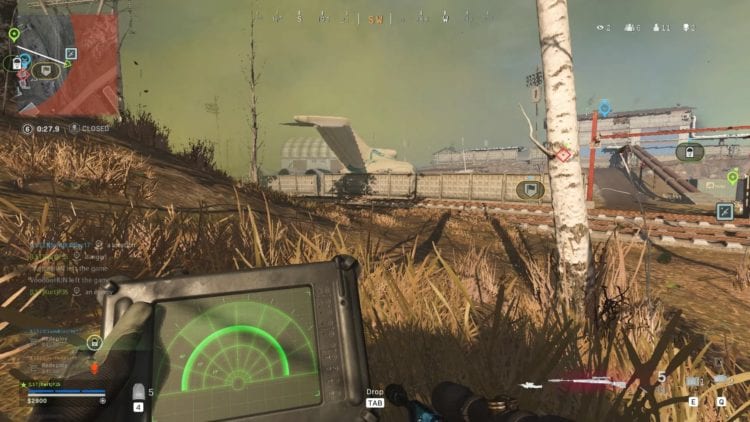 If you can’t afford a UAV, make sure you’re running a Heartbeat Sensor instead. These things are incredibly strong on Warzone thanks to the constant utility they offer.

Otherwise, you have the player base to thank for how good UAVs are. For some reason, most players do not run Ghost but instead opt for Overkill. This is a mistake for various reasons, but the biggest problem is that it makes you prone to UAVs and Heartbeat Sensors. Since so few people are running Ghost, UAVs are absolute scouting tools that give you a huge edge over your opponents.

At $4000, the UAV is not the Buy Stations cheapest option. However, assuming you have confidence in your mechanical skill, it is a better option than both the Cluster Strike and Precision Airstrike. There just isn’t a more powerful tool than knowing where everyone around you is.

The best offense is a good defense

It doesn’t matter how good you are in Warzone, you will die. Even if you position perfectly, transition perfectly, and have a god-tier aim, something will kill you eventually. Be it a cross-map sniper shot, a helicopter landing on top of you, or a squad spamming equipment, going down is inevitable. That’s why Self-Revive is a must-buy for everyone.

Costing $4500 from a Buy Station, Self-Revive is expensive, but extremely powerful. For one, it effectively hard counters snipers since, if they headshot you and you’re near cover, you can just crawl to cover and self-revive out of their line of sight. Equally, a lot of players don’t finish off their kills, so you can often self-revive and avenge your fallen squad. Finally, if you play a lot of solos, Self-Revive is necessary. Having a second life is more valuable than anything else when you don’t have a teammate to save you. 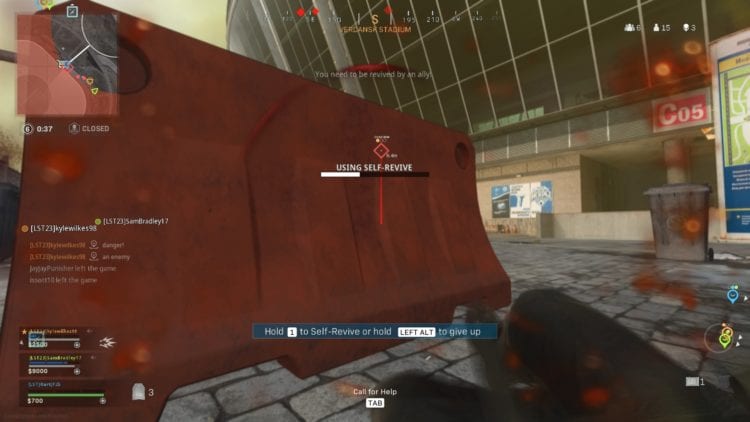 Speaking of fallen squads, redeploying your team should be a priority at every stage bar when you’re in the final zone. Obviously, having two or three player’s worth of damage is better than just your own. Teammates can also offer useful suppression fire when you get locked down by snipers or LMGs.

A cheaper alternative if you’re in a bad spot is to suit with some armor. Think of it this way. Each armor plate is worth 50 HP. You have 100 HP with zero armor. For just $1500 from a Buy Station, you can over double your health with three armor plates and have two plates left to spare. Of course, it’s better to find armor from looting and invest elsewhere but this is a tremendous budget alternative to Self-Revive.

If you don’t have a Self-Revive, you’ll need to know to revive through The Gulag. Be sure to check out our Gulag guide to help yourself get back onto the Battlefield fast. Also, if you’re new, we have a handy beginner guide to get you on your way.

Population Zero developers delve into exploration of its alien world