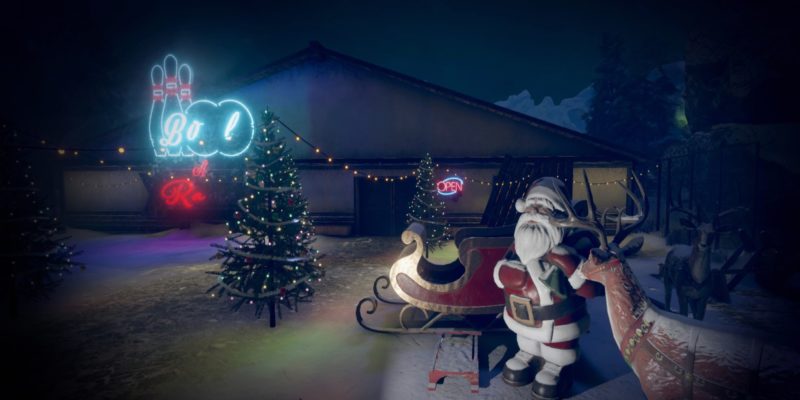 The Clown Museum site in Wasteland 3 can be visited early on. Later, you’ll also be able to complete the Elf on a Shelf sidequest in Santa’s Workshop. 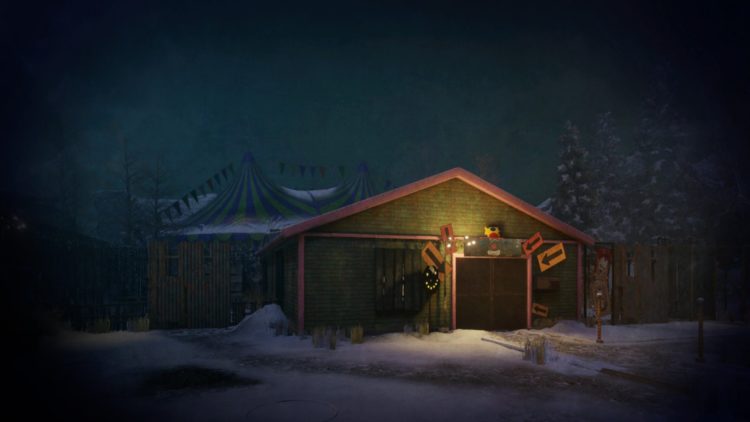 You can visit the Clown Museum early on in Wasteland 3‘s campaign. It’s just east of Arapaho Caravan.

Almost immediately, you’ll get accosted by a member of the Payasos, and you’ll need to fight. 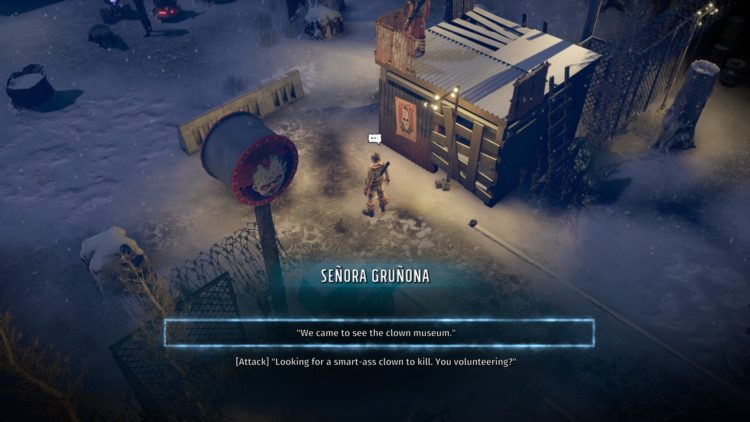 In any case, you’ll notice that the Payaso gang member dropped a Ballerina Gyro. Well, our short-term goal is to find three more of these.

There’s one in the pigpen. Another’s found inside the shed. The last one is a buried item near the fence. 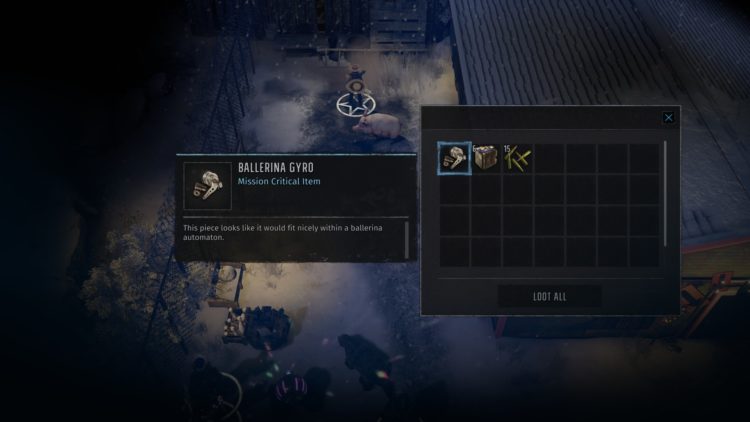 Anyway, once you’ve found all four, place them inside the ballerina figures in the yard. Then, use the house’s intercom so Miron can let you in. He’ll frolic in the yard.

If you use the side entrance (Lockpicking 8 then Mechanics 9), you also need to use Kiss Ass 7 or Hard Ass 6 against Miron. 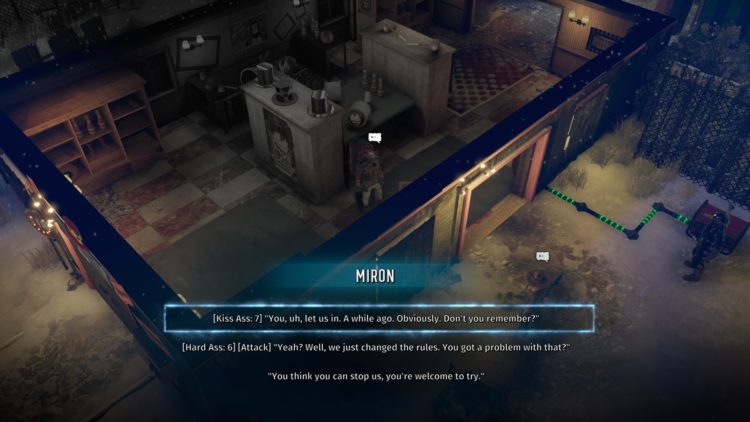 Before I forget, there’s a pile of frozen rocks near the fence that you can melt with a flamethrower. It lets you open the chest which contains a lore book.

The shed also has a toaster (Toaster Repair 6) with a Tarjan token. 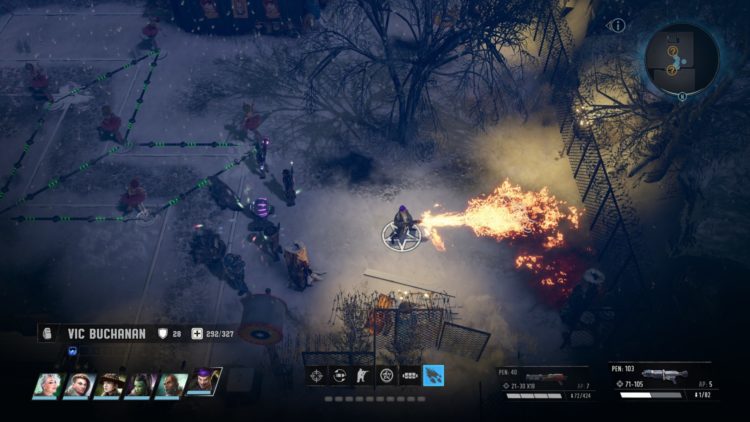 You’ll encounter a Payaso gang leader in the big tent.

There’s a Payaso truck behind him so watch out; Hard Ass 7 lets you demoralize enemies. 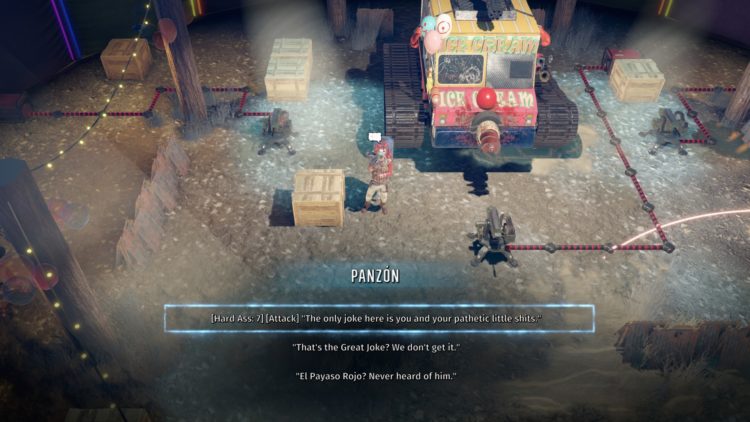 After taking out the hostiles, pick up the loot which includes the Payaso Turret and Ice Cream Truck Horn for the Kodiak.

Note: I didn’t realize this earlier, but there seems to be a dirt path off to the side (just before you enter the Clown Museum’s tent). You can go around it and try to disable the turret generators (Mechanics 5). 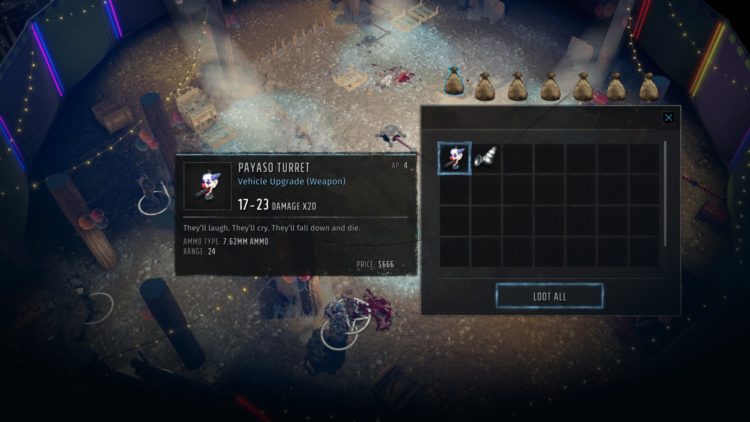 Santa’s Workshop: Elf on a Shelf

While traveling northwest of Colorado Springs, you’ll hear a distress call from an “elf” who says she’s trapped in “Santa’s Workshop.” She’s not kidding. It’s an actual location in Wasteland 3. 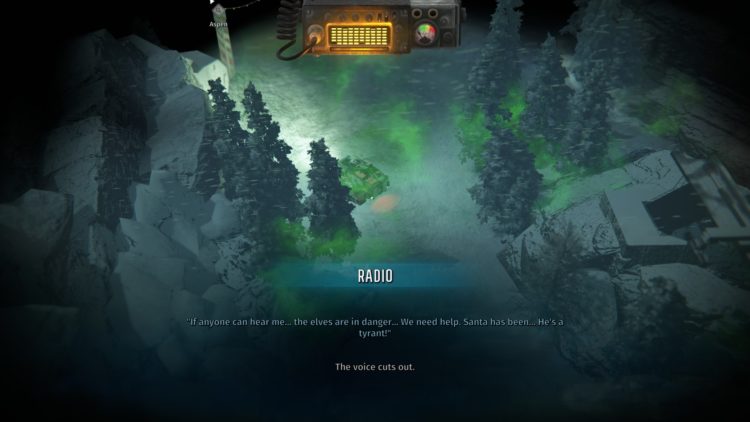 Santa will go “ho-ho-holy shit” thanks to your surprise arrival. Sugarplum Mary, the elf who contacted you, says she can’t talk while Santa’s close, so go tell him that you smell cookies.

Mary informs you that Santa’s handing out a different kind of “candy” since he’s the head of a drug cartel. Looks like we got a Walter White Christmas here. 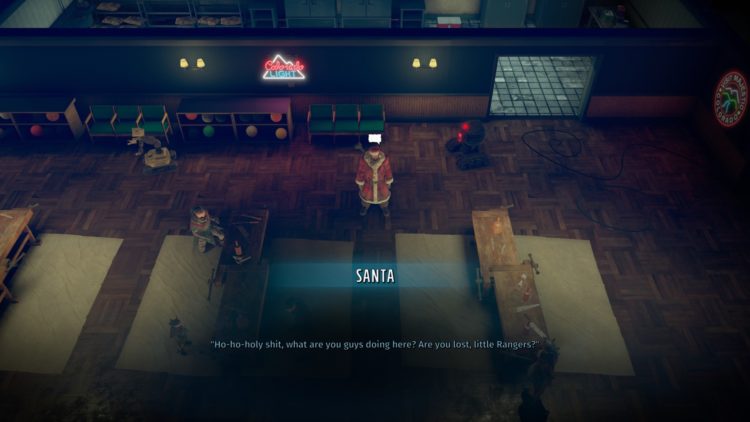 To gather evidence, head out back and kill the toads and other creatures. Open the shed to find elf corpses and the Jingle All The Way Schematics (quest item).

The back of the house, meanwhile, has a container with the Makeshift Mace. 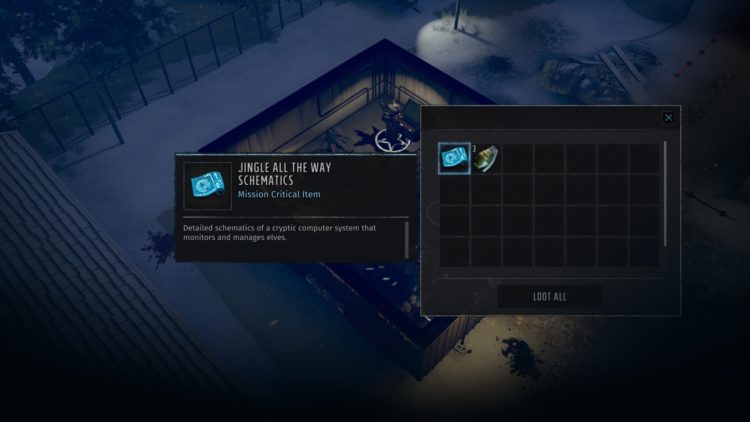 Next, check out the house (Lockpicking 6). You’ll find an Elf Outfit and Chemtek Legs in the bedroom.

Also, take a look at the mantle which has the Brain Candy Recipe (quest item). 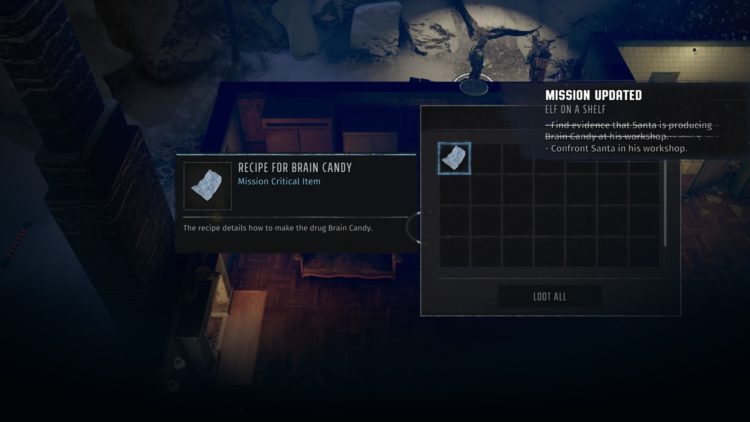 Go ahead and confront Santa. You’re presented with several choices: 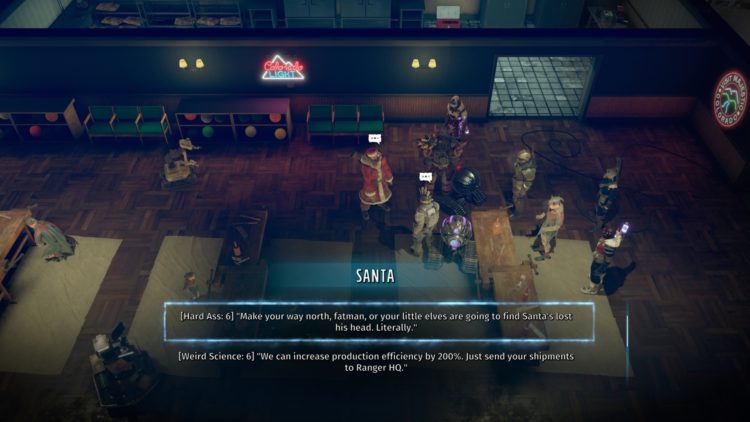 If you manage to kill Santa or run him out for good, you can speak with Sugarplum Mary: 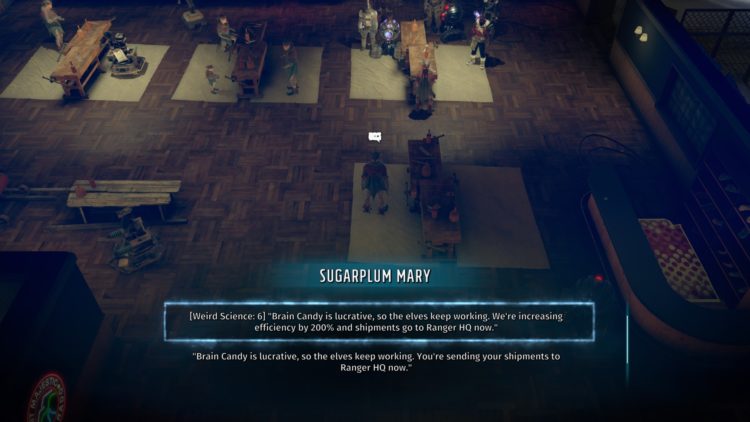 Other stuff to do

There’s some extra stuff you could do while you’re here. Assuming you haven’t confronted Santa yet, you could open the door to the drug lab (Lockpicking 8). You’ll see all the enslaved elves here.

You can use the terminal and input the Jingle All The Way Schematic that you found earlier to disable the computer. This will free the elves. Alternatively, you can try Nerd Stuff 8 or Mechanics 8. 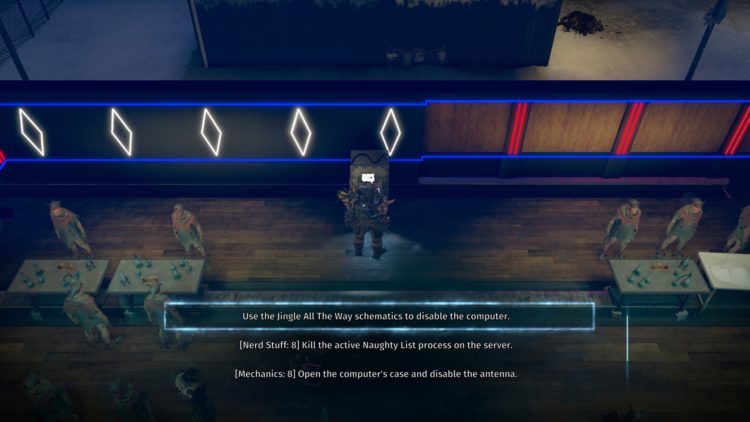 Nerd Stuff 8 will lead to a wacky result since it doesn’t actually “kill the active Naughty List process on the server.” Instead, it kills those who Santa considers “naughty” — aka. the vast majority of his elf minions.

They’ll all go “plop!” and Santa will pick a fight with you. 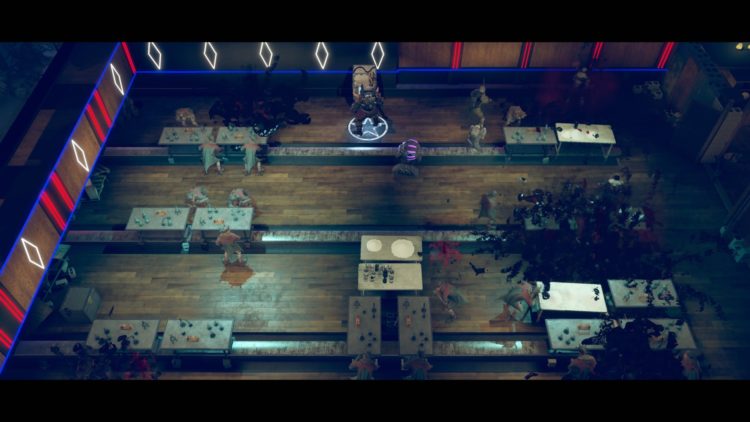 Anyway, the workshop (Lockpicking 10 or the key from Santa’s corpse) has the Commando Legs and Red Ryder Air Rifle (complete with its special pellet ammo).

Lastly, and this is just an aside, I actually received shipments of Brain Candy when I returned to Ranger HQ. Apparently, someone climbed down the HQ’s chimney and ate some cookies before leaving drugs for the Rangers. This was even though I “killed” Wasteland 3‘s Santa Claus. 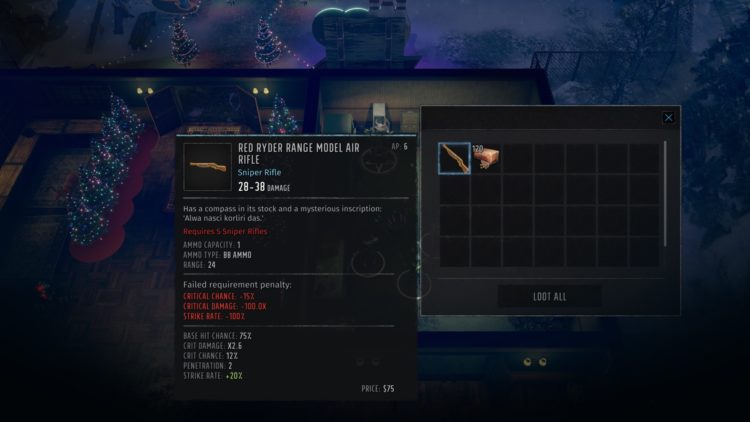 By Kevin Foley5 hours ago
Guides