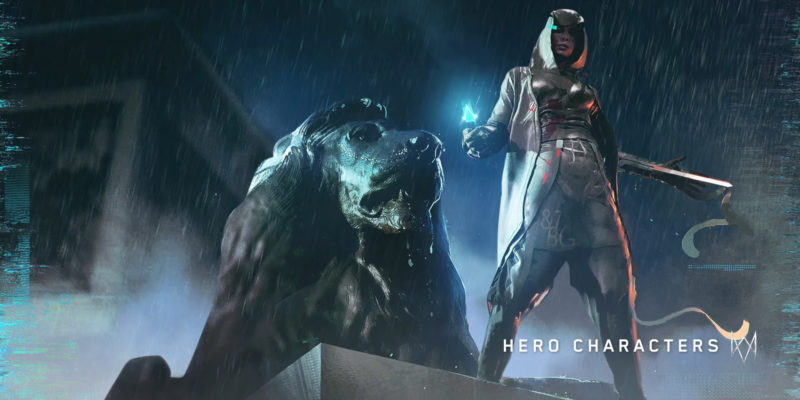 Watch Dogs: Legion isn’t out yet, but that hasn’t stopped Ubisoft from showing off what’s coming to the game after it launches. In the Post Launch Content Trailer, Ubisoft’s Lathieeshe Thillainathan chats about the season pass, along with some upcoming free content. You may recall the Aiden Pearce reveal last month. He’s starring in his own adventure, but he won’t be alone. Pearce is joined by three others, and one of his new allies has a familiar hidden blade.

Having someone from Assassin’s Creed make an appearance in a Watch Dogs game isn’t too surprising. After all, Ubisoft has teased the stab-happy franchise in both previous Watch Dogs releases. Various Easter eggs found in Watch Dogs and Watch Dogs 2 have led fans to wonder if the two universes actually co-exist. We may now have an answer.

We only get a brief glimpse of her in the trailer, but the imagery is more than enough. Darcy, a playable character who accompanies Aiden on his quest, is shown dressed in a white outfit, sporting a hood, a hidden blade, and is holding a glowing assassin logo. Oh yes, she pretty much screams “hey, I’m from Assassin’s Creed.” She should make for an interesting companion in Aiden’s world. Darcy joins him, along with Wrench (from Watch Dogs 2), and the mind-reader Mina in Watch Dogs: Legion – Bloodline, a new story mode. It all comes in the game’s season pass.

Thillainathan also talked about some free content coming our way. An online mode, in which you can play in four-player, co-op teams, will be available starting on December 4. Alongside some buddies, you can engage in new co-op missions, as well as experience dynamic events and tactical ops. Watch Dogs: Legion will also get a Spider-Bot Arena, where you and seven others duke it out as adorable, killer machines. Finally, Legion will see the return of invasion, where you enter the games of other players just to screw with them. It all sounds like a good time.

Watch Dogs: Legion is launching onto PC on October 29. The season pass comes included with both the Gold and Ultimate Editions of the game, going for $99.99 USD and $119.99, respectively.