The Windows 10 free upgrade period is coming to an end. 29 July will be the final day Windows users can upgrade for free. So how painful is the upgrade and what does it mean for your privacy?

This week I took the plunge on a second PC. It’s a Windows 7 PC, where I do most of my work and where most of my many games are installed. Clicking the small upgrade button I received a message saying that I’d be notified when I was eligible for the upgrade, despite trying to get this two days ahead of the deadline. Fear not though, ignore that message and head the Microsoft site and download the Windows 10 upgrade file and do it that way. No point wasting time.

Once the file was downloaded and activated I needed 20GB free on the C: drive. Annoyingly, the C: drive is a small 120Gb SSD so it meant cleaning up a load of stuff. Windows will prompt you to try the Windows clean-up tool but that usually doesn’t find much. After scrambling around deleting useless files the 20Gb was free and it was time to proceed.

The installer takes quite a while to download the files and prepare for the Windows 10 launch. It took about 7.5 hours in total in my case. Much of this time you can continue using the PC while it grabs the files, but put at least an hour aside at the end to allow the process to complete when the PC is otherwise unusable. Best dig out a box-set of a show you’ve been putting off watching and give the PC and Windows time to work its wizardry. 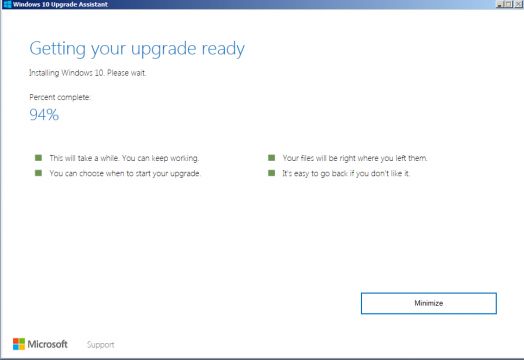 This took quite a while.

Once the upgrade process restarts the PC, it’s time for one of the most important parts of the install process: The settings.

Windows 10 has come under fire for the amount of information it wants to grab from users to send back to Microsoft HQ, and let’s face it, you probably don’t want all your information shared. Microsoft will try to track as much as possible by default; including browsing habits, or even tracking your keystrokes, all in the name of targeted advertising.

However, you can limit what is being sent back to Microsoft by clicking on “Customise Settings” which appears as a tiny link on the first screen that appears once Windows 10 has rebooted. It’s very small but it’s in the bottom left. If you miss it at this stage, don’t worry too much, you can still reach these settings later.

Once this has been clicked, you will then be taken to series of screens asking what you want to turn on or off. In my case I made sure everything was disabled. If you want to use features such as Cortana then you will have to allow some data to be sent back to Microsoft. It’s a tradeoff.

Even though you have done this step, you will still need to disable many of the tracking “features” which can be done by heading to:

Now work your way through the list disabling what you want. It’s quite disturbing how much information Windows 10 wants to access, but with some tweaking and turning off it should be all good. 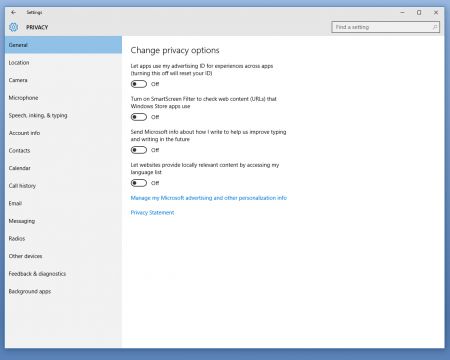 On your bike! Not for you MS!

I’ll admit that I loved Windows 7 and I avoided upgrading to 8. Windows 10 is a bit of a leap of faith, but so far I have found it to be fine. Now it’s worth noting I’m not wanting to hook other devices into it, or integrate it with this, that and the next thing. This PC is purely for work and gaming.

With only a couple of days left to make the jump to Windows 10 for free, it’s worth it if you take the time to work through all the settings. Windows 7 users will find it familiar enough, and with some theme tweaking, it can practically function in the same way.

As for games and Steam? No problems so far, even on alpha versions of games I have been testing, which is always good sign. Windows 10 has been around for long enough now for most weird issues to be ironed out, and for developers to make sure games are fully compatible. Adopting Windows 10 is also your only way of using DirectX 12, which (provided you have a compatible GPU) can be a decent boost in certain newer titles.

Is it worth taking advantage of the free upgrade? Absolutely. Besides, you can always install it now, then roll back to windows 7/8 and still be eligible for the upgrade at a later date free because Microsoft will have flagged your hardware “with a digital entitlement”.