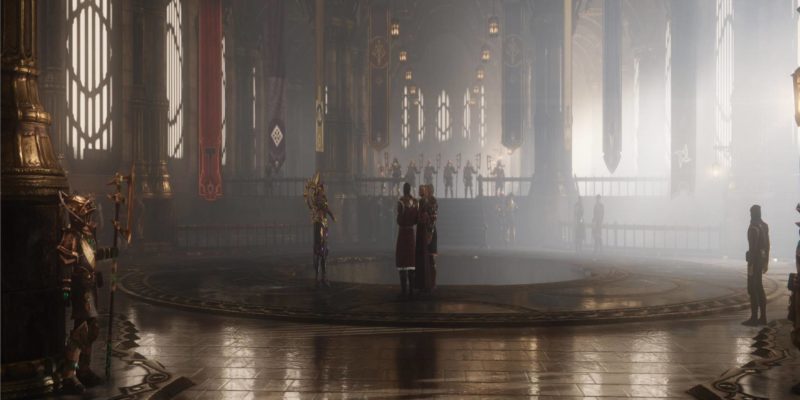 So, you’ve finally beaten the campaign in Wolcen: Lords of Mayhem. It’s time to start the endgame mode known as Champion of Stormfall where you play a bit of city management as the regent. There are two features here: the first consists of upgrades to Stormfall itself (which is the focus of this guide), and the other concerns mandates and expeditions, short missions that reward you with resources. 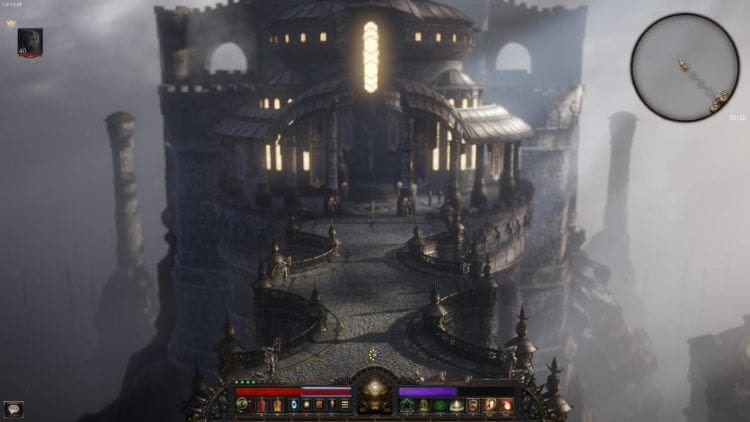 As for the Stormfall upgrades, you can check them out by opening the panel (default “N” key). Gold and primordial affinity will be used for each task that you select as well as productivity. Productivity is earned whenever you complete mandates and expeditions. The more difficult the mission is (when you apply modifiers) the higher the productivity bonus based on its current value.

Productivity is applied depending on how many queued tasks you have active at the same time. If only one task is active, all the productivity will be used up for that; if you have more than one, then the amount is divided.

As mentioned in our official review, your endgame activities can be quite stingy with rewards. Due to the exorbitant costs of several upgrades, you’ll find yourself re-running countless mandates and expeditions over and over just to complete one task. 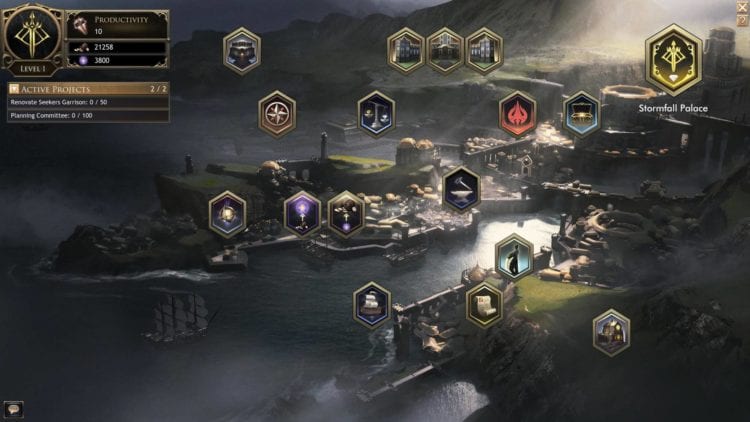 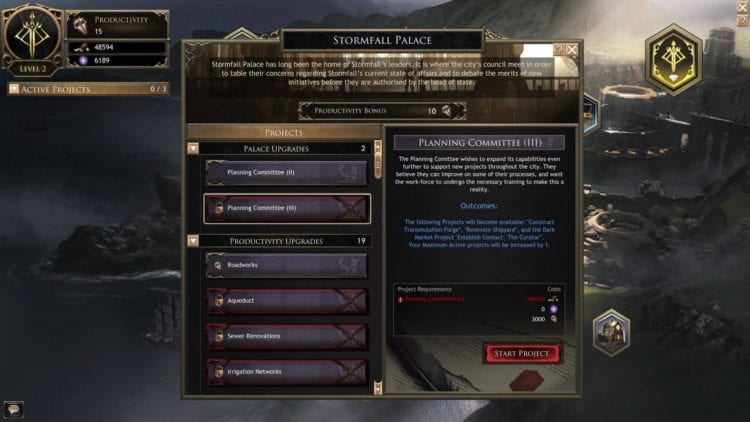 Retrieve Anankis Artifact – Each of Wolcen‘s campaign acts gives you an Aspect of the Apocalypse (transformation) token. This Champion of Stormfall project provides you with your fourth and final one; it requires the “Renovate Shipyard” project, 2,000 primordials, and 500 productivity. 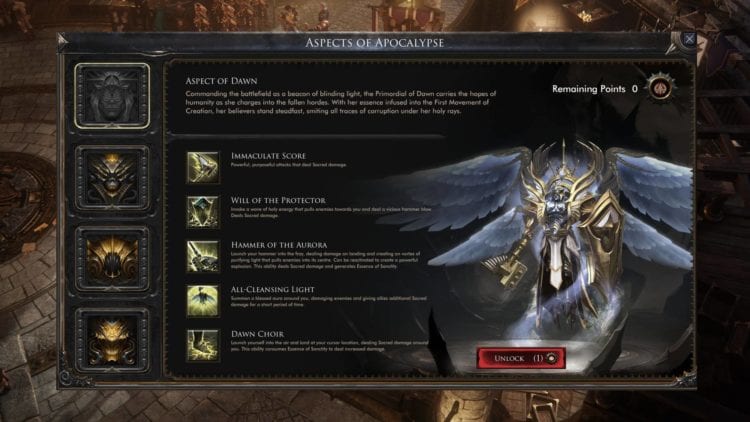 Once you’ve unlocked this building via a project, you can send out troops on missions. Costs and rewards will vary depending on the difficulty of the missions. Once you’ve obtained the requisite productivity points, you’ll get your rewards via a panel. 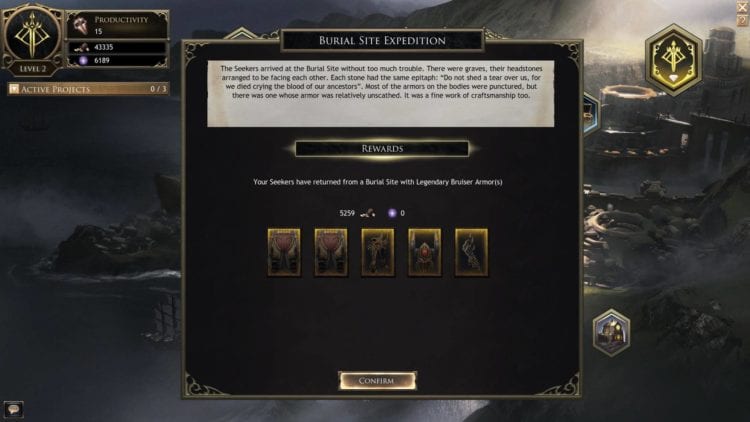 One of the most important districts that you can upgrade in Wolcen‘s endgame. There are multiple options here related to crafting materials, upgrades, and more: 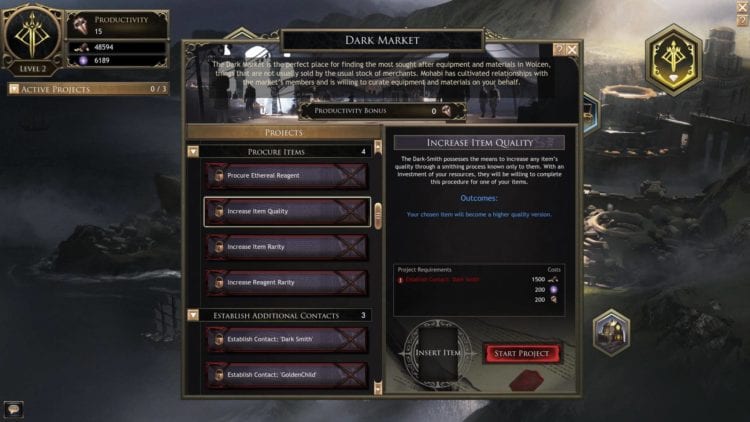 The projects here are for your personal stash tab in case you want to store more loot.

The first construction project unlocks the two other tasks: 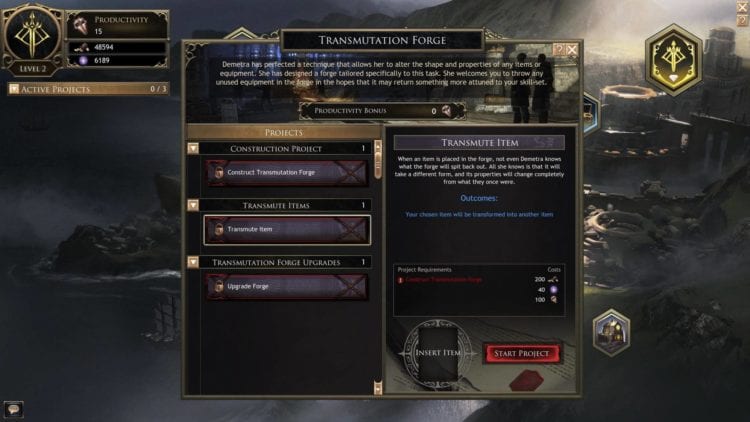 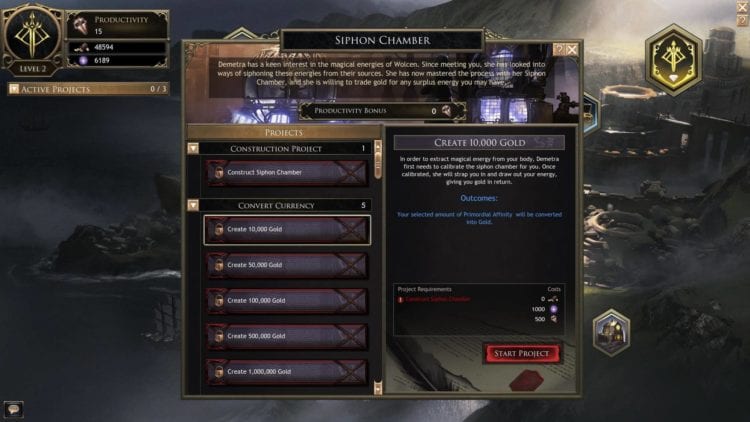 There’s only one project here, “Renovate Shipyard” which has this definition: “Projects that require ships will become available.” Unfortunately, only one project, the aforementioned “Anankis Artifact,” seems to require this.

It simply says that “Diplomatic Missions will become available.” These are a bit like the Seekers Garrison projects.

Refuge for the Blind and Salt Baths of Stormfall 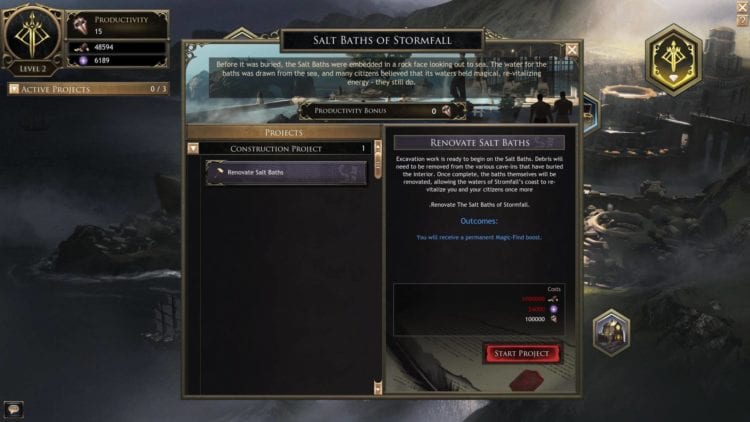 Which upgrades/projects should you complete?

As mentioned, “Stormfall Castle – Training Facilities” should be the first project you complete once you reach Wolcen‘s endgame due to its low cost and base productivity increase. After that, you can opt for the “Seekers Garrison” so that the missions can net you some loot or resources passively.

The features added by the “Dark Market” and “Transmutation Forge” can also be handy. You can get item upgrades or completely new items after spending a few resources. However, it’s also currently bugged. There have been reports of players experiencing crashes after attempting to use these buildings.

Update: The Dark Market and Transmutation Forge crashes have been fixed. Instead, there’s now an exploit that lets you upgrade a unique item’s rarity to turn them into OP legendaries.

Lastly, the “Salt Baths of Stormfall” project tends to be very important in Wolcen‘s endgame due to the permanent Magic Find boost. The old Magic Find exploit seems to be fixed now, and so you’ll need to pony up a hefty amount of resources to complete this. Then again, the tooltip doesn’t give a lot of info. As of now, we’ve yet to see just how high the boost would be. 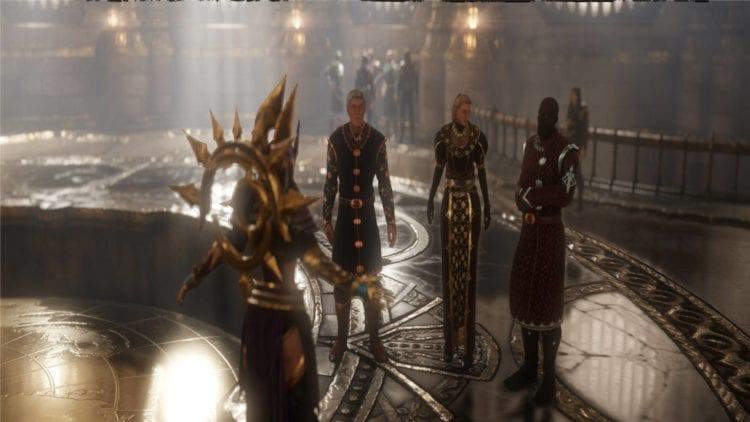