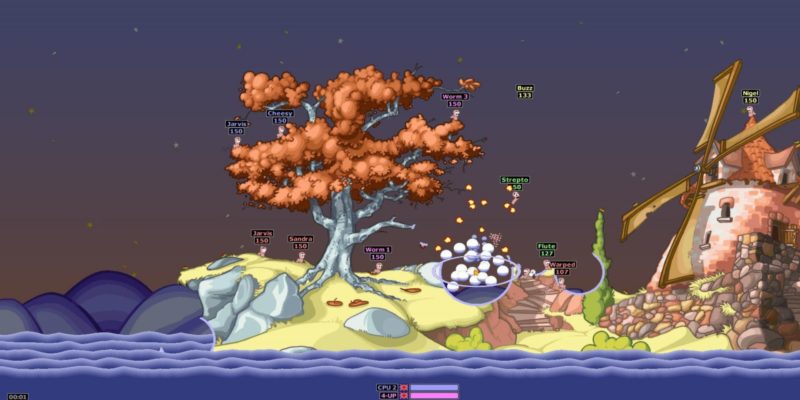 First released in 1999 on the Sega Dreamcast, Worms Armageddon is perhaps the most iconic installment in Team17’s popular tactics franchise. So much so that even after 21 years it is still in active development. Patch 3.8 is a huge update that adds a plethora of new content and quality of life options to the Steam version of Armageddon.

Many of the listed changes aim to bring features present in the newer games to this timeless classic. Despite its now-legendary legacy, Worms Armageddon was developed before many of Team17’s later ideas came into fruition. Patch 3.8 also adds a good amount of modern PC standardization that wasn’t present in the original port when it first came to Steam in 2013.

Welcome back to the Armageddon

In an attempt to turn Armageddon into a genuine 2020 experience, both full support for Windowed Mode and a Streamer Mode has been added. The former should help players work around the tactics game’s awkward screen resolution and various reported game capture issues.

Meanwhile, there’s that nifty addition of a Streamer Mode. This mode will let content creators stream Worms Armageddon without having to worry about their IP address being leaked when joining online games. Speaking of multiplayer, you’ll now be able to add CPUs to your online games to fill out the numbers.

Another cool addition is that by pressing ALT + Pause or typing “/map” into the chatbox you can save any landscape generated. This means you’ll be able to pick up in the middle of games you couldn’t finish or even start a new game on an old map you enjoyed.

Team17 has also made a significant effort to make Worms Armageddon easier to run on newer operating systems. Not only does this mean the Windows 10 experience should be smoother than before, but also Linux users on Wine and Proton can now enjoy native support.

The previous language barrier is no more. Patch 3.8 has been used as an opportunity to translate Armageddon into seven new languages. These are Finnish, French, German, Portuguese,  Russian, Spanish, and Swedish. These translations were done by volunteers and there are plans to add support for four more unspecified languages, too.