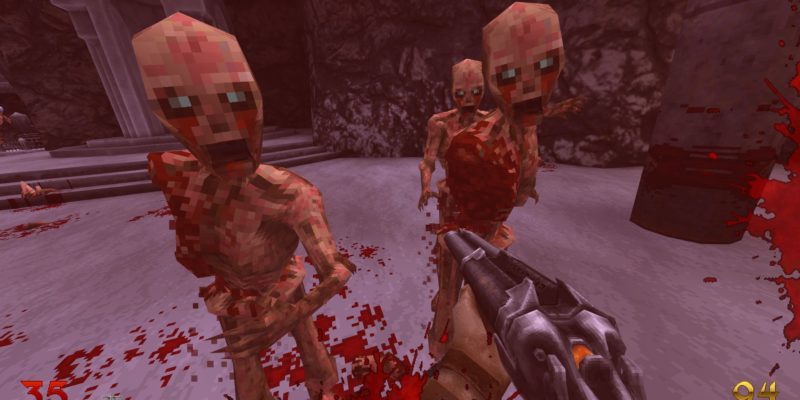 I’m glad to see that the ’90s FPS renaissance is still going strong. Wrath: Aeon of Ruin has been hyped up for quite some time. I thought it was headed for full release but was surprised to see that it’s entering Early Access instead. So, is it worth picking up now? Or are you better off waiting for more content?

How much is enough?

Wrath: Aeon of Ruin is set to have about 15 levels broken up by three hub worlds. At present, only the first world and two of its levels are available. Therefore, if you purchase the game now, you’ll only be able to access a fraction of its content while waiting for more to trickle in.

That being said, there’s more here than it sounds like. Sure, there are just two levels, but they’re very large. Each can take more than an hour-and-a-half; you can easily hit two if you search for secrets. On top of that, the available hub world is a good size and also has secrets of its own to locate. Suffice to say, if you’ve been itching to play Wrath: Aeon of Ruin and want to jump in now, there are at least a few hours of enjoyment to be had at launch. 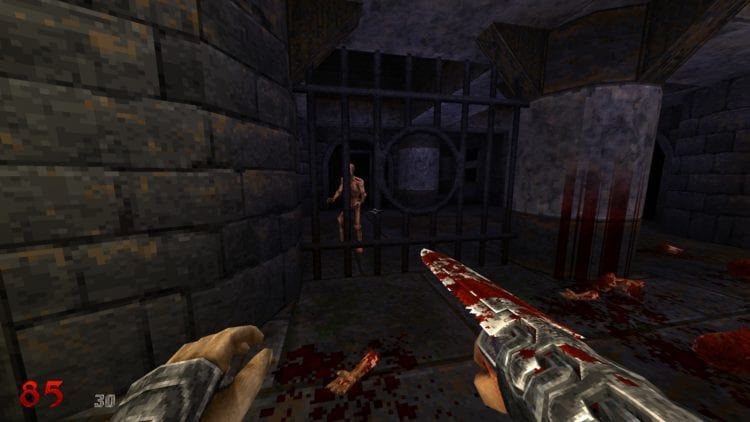 Only one of us is making it out of this meeting. And you’re an easily-killed zombie in the first level, so it’s not looking good for you.

If you’re not familiar with Wrath: Aeon of Ruin, it’s a first-person shooter made in the Quake engine and styled on that game. You go into large levels that are ripe for exploration, hunt down weapons and ammo, and fight enemies. It’s pretty standard stuff that feels very familiar. But the quality of the level design and the excellent enemy variety make it stand out.

As I said earlier, the levels are very big. They’re more akin to hubs themselves than the level chunks of yesteryear. They’re open and complex but easily navigable. You progress by pulling switches to open pathways and go up elevators to get around. But you’ll frequently find yourself unlocking shortcuts that lead back to where you came from. Due to this, the levels feel very interconnected.

The different areas are also quite distinctive, with notably different layouts that make it hard to get turned around. The secrets and items you’ll find scattered around also make searching the area a joy, as there are many rewards for keeping your eyes peeled and paying attention to your surroundings. 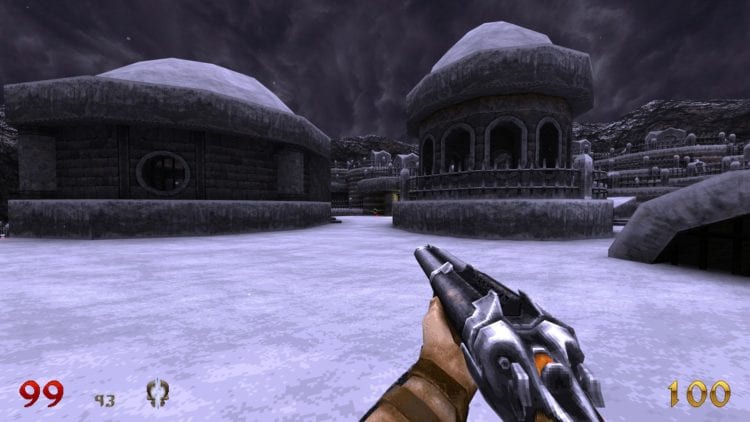 Great, a snow-covered field where enemies are waiting behind every corner. What could go wrong?

However, as Wrath: Aeon of Ruin is a frantic first-person shooter, a lot of the focus is on the combat. You fight with a mostly typical assortment of weapons. You start with just a simple blade, albeit one that you can charge up, which allows you to launch yourself forward on the ground or even in the air. Shortly afterward, you’ll come across a pistol, a shotgun, a machine gun, and a weapon that hurls acidic spheres at your enemies.

The chunky polygons the guns are built out of look really cool and era-appropriate. Using them is even better, though. There’s no reloading, and the weapons all feel accurate. The pistol and machine gun do feel a bit underpowered, though, so I mostly stuck with the shotgun and the Retcher, which hurls the aforementioned balls of acid. The action is very satisfying and enemy placement is generally excellent, so the gameplay will likely please genre fans.

The enemies also blow apart into a gory mess upon dying. It’s very satisfying to carefully circle-strafe through a bunch of enemy attacks to unload your shotgun in a foe’s face and watch its corpse get torn into bloody chunks. The way the character models break apart is something to behold. Even though Wrath: Aeon of Ruins‘ visuals are intentionally dated, the way this looks is still very impressive. 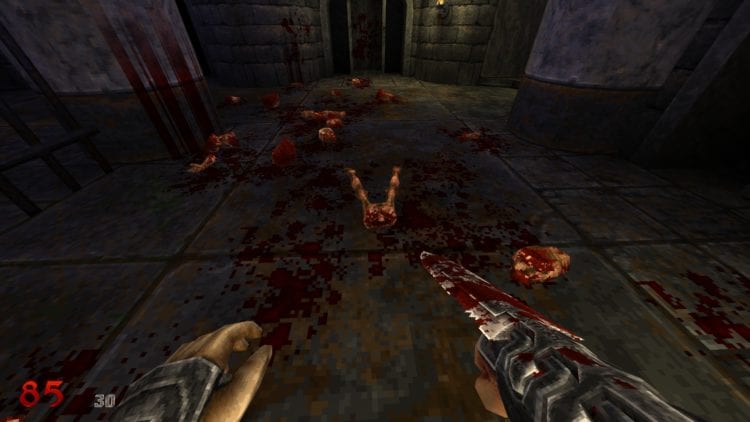 Well, you still have your legs, at least. I don’t know what you think you’re gonna do with them, but you got ’em.

That sentiment describes the game’s overall visual design as well. If you’re under the impression that levels won’t be much to look at due to the use of something as old as the Quake engine, then Wrath: Aeon of Ruin is yet another testament to how flexible and impressive the engine is. Rendering a huge level with plenty of height and complex layouts is completely doable, and this game certainly does a lot.

You can choose between either of the game’s levels once you drop into the hub world, but you’ll need to do the closer one first, as the second wastes absolutely no time in throwing hordes of powerful foes at you. You could probably take them out with just your blade with enough skill, but you’ll want to have the arsenal that the first level provides.

The first level is a snowy crypt that alternates between dark dungeons and bright, open spaces. The second is earthier, taking place in a swamp. They’re not exactly the most original locations, but they look good and have a fair amount of personality. Most importantly, they’re a joy to run around in while blasting Wrath: Aeon of Ruin‘s hideous foes. And I mean hideous in the best way. You don’t want a giant creature spewing acid at you to be cute and cuddly, after all. 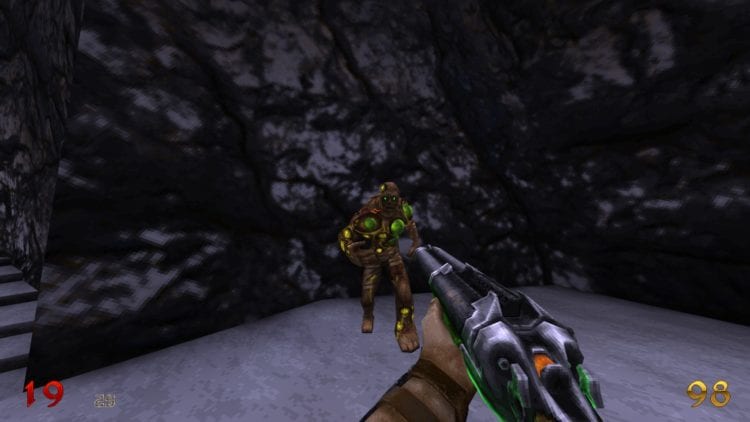 Y’know, those green pustules really bring out the color of your decaying flesh.

One of Wrath: Aeon of Ruin‘s most unique mechanics is the way it handles checkpoints. Most games either let you save whenever you want or offer regular checkpoints. The former allows savescumming, while the latter can make for frustrating segments due to checkpoint placement. This game finds a happy middle ground that I’m honestly quite taken with.

For starters, you need an item to save most of the time. You’ll find skulls called soul tethers throughout the levels, and each pickup gives you one checkpoint. Simply select it during gameplay and put it down, and you’ve got yourself an instant save. This works exactly as you’d expect. The kicker, as you almost certainly understood immediately, is that you can’t save without them.

If you’re the type that likes to quicksave every few seconds, you absolutely can’t do that here. If you use up all of your soul tethers, you generally won’t be able to save at all, so it’s important to use them when you need to. That isn’t to say that there isn’t another means of saving. Every now and again you’ll come across shrines that will save and refill your health, regardless of if you have any soul tethers. But these are rare and typically quite far apart. Plus, you can only use them once. 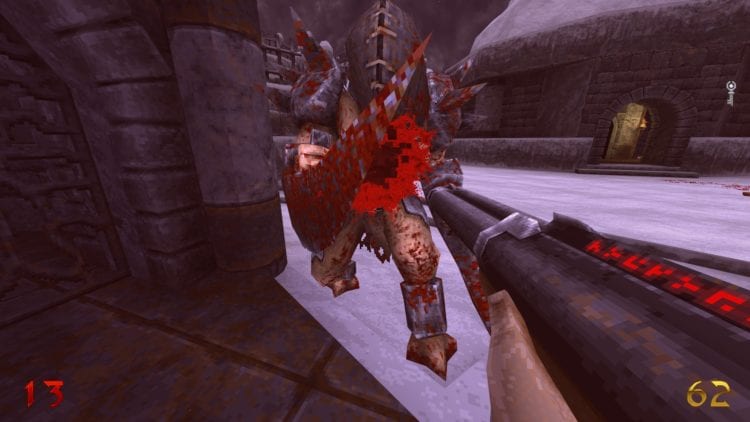 PLEASE DON’T KILL ME! I’VE GOT SO MUCH TO GIVE!

Stay on your toes

This saving mechanic really does a great job of putting the focus on playing well. Since you make your own checkpoints, you’ve got room to use soul tethers as you see fit. On the medium difficulty, Wrath: Aeon of Ruin‘s first levels can be challenging, but the enemies don’t do a ton of damage and there are pickups everywhere. Even if you’re not great at these games, you still might be okay with this difficulty, as you can always double back and pick up more health and armor.

Soul tethers are also fairly common. I didn’t save a lot, but I did when I felt I needed to. This resulted in me having a bit of a surplus, which will likely come in handy, as later levels will probably be less willing to throw soul tethers at you. There are also other items you can pick up, such as one that heals you, which is handy in a pinch.

When all is said and done

I’m really looking forward to seeing the new content that Wrath: Aeon of Ruin has in store. It’s a satisfying, frenetic shooter with excellent enemies and level design that is a lot of fun to play. I wouldn’t blame anyone for holding off on a day one purchase, but I’m already very impressed with these first two levels and the hub. At the very least, this one is clearly worth keeping an eye on, as it stands to be yet another fantastic entry in the growing pantheon of throwback first-person shooters.