I hate it when I can sum up a game in four words, because it gives me the opportunity to be astonishingly, breathtakingly lazy, and – as someone so lazy I prefer a lie-in to last not a few hours, but until the following day – that’s an opportunity I’m usually all too happy to take. But today, for you, I will resist! I will forgo this wonderful chance, and not sum up Wreckateer in four words!

I’ll do it in six instead. “Kinect-driven Angry Birds, in 3D.”

The basic premise is that you, as a nameless drone given the (presumably non-euphemistic) title of “rock polisher”, are tasked with crashing through 50-odd goblin-infested fortresses – divided into ten discrete areas – using a ballista and an unbelievably limited amount of ammunition. As you smash towers, walls, and houses, you build up points. Earning enough points to get a bronze medal unlocks the next level, while earning a coveted gold medal on every level in one of the areas unlocks a special challenge level that tweaks the mechanics in interesting ways. 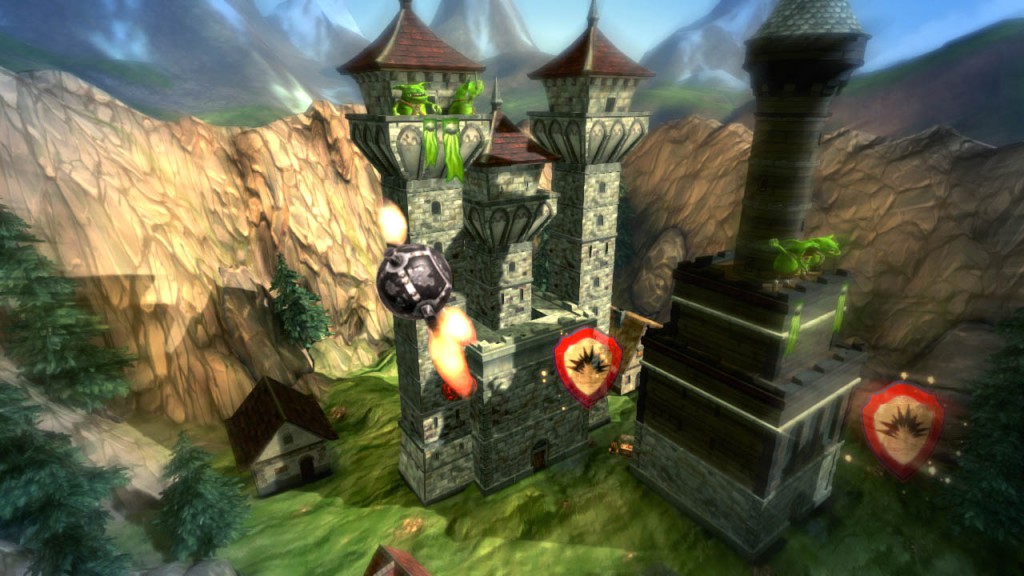 As you might expect, things are made more interesting through the variety of the ammunition. There are flying shots that you control directly! Bomb shots that you can explode at will! Lift shots that can be launched further into the air three more times after they’re fired! Speed shots that rip horizontally through any defences in their path, as though said defences had all the ballistic resilience of a wet digestive biscuit! Basic shots that… actually, no; basic shots are pretty much just giant flying rocks.

Each castle is also festooned with icons to hit. Some merely give bonus points, but the more interesting icons actually alter the properties of shots; one, for instance, will propel any shot straight across as though it was a speed shot, while another will give an extra vertical boost, just like the lift shot. You’ve also got a bit of help in that splattering three goblins across the castle walls will net you a mulligan, letting you reverse time and try the last shot again.

Each castle is laid out as a mini-puzzle, with the intent clearly being for a combination of skill, strategy, and luck to win the day. With your limited resources, you need to cause as much damage as possible by aiming for the right locations in the right order, and – when everything works as it should – it’s actually pretty good fun. If you get your aim just right, and activate the split shot at the perfect moment, and control those beautifully so that they completely smash through a wall, and then (in an accident you will later swear was fully intentional) two of them rebound off a cliff face and crush a tower and a big mansion, it can be breathtakingly cathartic.

When it doesn’t work as intended… well, we’ll get to that soon enough. 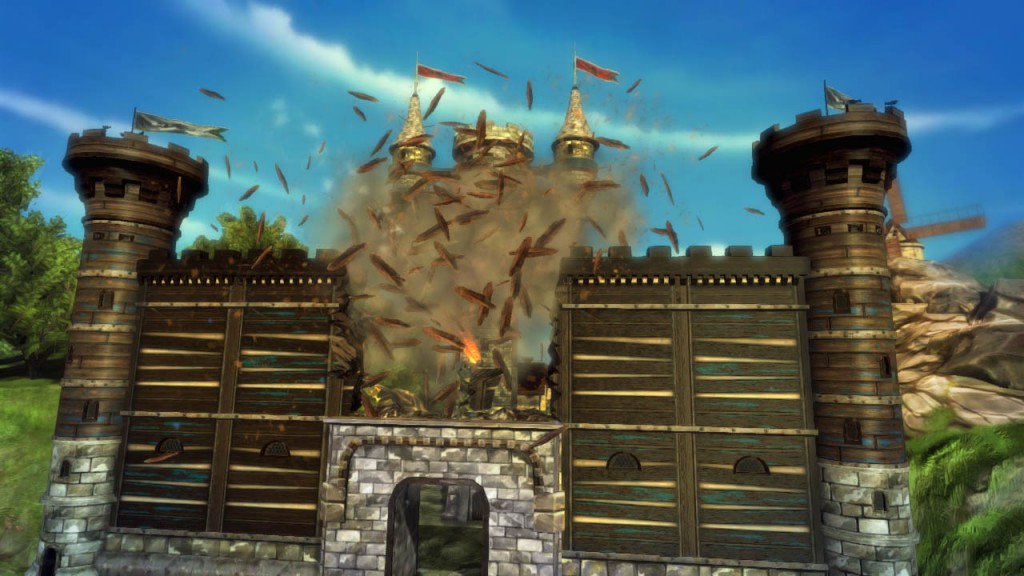 You’re “aided” in your quest by a pair of loathsome idiots named Tinker and Wreck, who are possibly the most irritating double-act the world will see until Peter Kay clones himself and goes on the comedy equivalent of a rampage. This pair of gaping rectums serve to deliver the game’s patronising tutorial, as well as to narrate your progress via a series of what I’ll kindly call jokes. For some reason they also have a fine line in Top Gun references, which would probably be worth an extra point on the score if I didn’t want the characters themselves to drown in sewage.

Putting those two to one side for a moment – preferably when standing right on the edge of a wolverine enclosure – it’s probably about time to mention the Kinect controls, which… actually aren’t entirely hateful. They’re not good, but they’re not terrible.

It works as though you’re holding an invisible elastic band catapult. You clasp your hands together to load a shot. You then step backwards to increase the power, and shuffle to the left or right while edging your hands up or down to aim. When you’re happy with your position, you throw your arms out horizontally to fire. Once the shot’s in the air you can nudge it around a bit by smacking the boulder with your hands, or – if it’s a special shot – “activate” it by swinging your arms into a Y position. 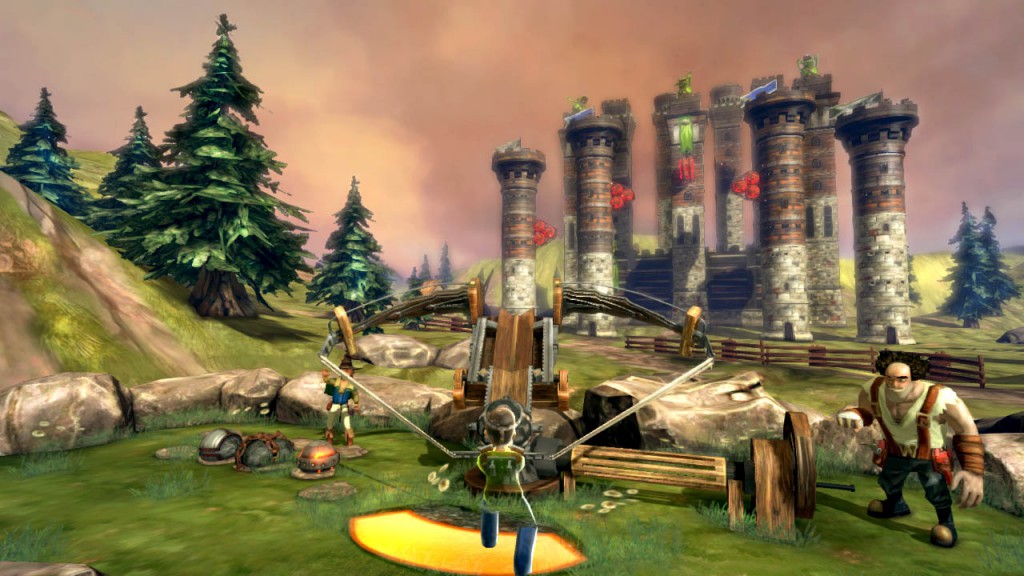 It’s not spectacularly precise, but for the most part this isn’t a precise game. The aftertouch, for instance, just has you smack the rock in one direction or another, the force of your mad flailing making no difference whatsoever to how far it’ll go. Which sort of makes you wonder why there’s no controller support.

It’s on the occasions that you need to be precise that problems arise. If you’re going for a gold, or are on a tricky level, or are doing one of the execrable maps based entirely around banking flying shots through narrow spaces, then the imprecision inherent in this control scheme becomes a more insurmountable problem than the levels themselves – and then you start to wish there was controller support.

Nonetheless, the Kinect controls aren’t Wreckateer‘s biggest problem. Yes, okay, they can be a pain in the arse, and I can’t think of a single gameplay reason why there should be no gamepad input available, but for the most part they’re acceptable. 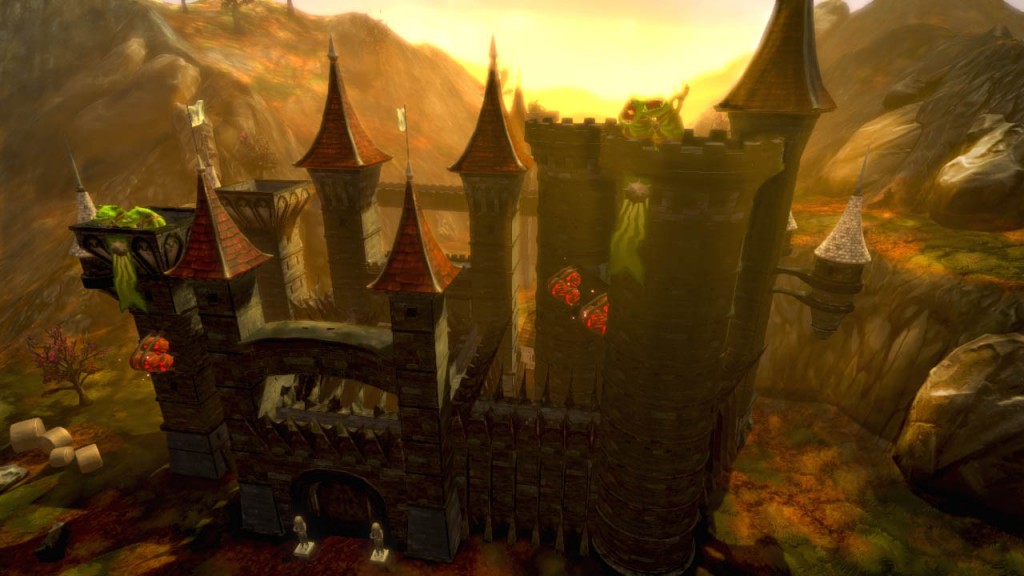 The wonky, unpredictable physics fit into the same boat in that they’re far from ideal and occasionally become problematic (why did that huge crumbling tower not smash bits off that wall?) but they’re somewhat forgiven because – in the grand scheme of things – they also don’t matter a great deal.

The 3D perspective, while not Wreckateer‘s biggest issue, is a problem. The 3D makes it a hell of a lot harder to plan your shots out, and the game’s token response to this is to give you a vaguely isometric view of the castle you’re targeting should you salute. There are no camera controls that I could find: you can’t highlight the dynamite-laden weak points that you should be aiming for, nor can you swoop around to work out where icons are in relation to each other. Even when a shot lands, the game just picks a static camera angle to show the damage it’s doing, and a third of the time it chooses a spot about three feet away from the first thing you hit. This means you’ll be replaying levels a lot just to get the gist of the layout, and this leads onto the biggest problem.

The pace. Wreckateer is far, far slower than it has any right to be. This should be a game in which you’re launching shots, adjusting them, and then launching more with nary a pause. It’s a game which should have fast level restarts when you muff a shot; it shouldn’t take 15 seconds to restart a level. It shouldn’t suffer framerate problems when too much is going on. It shouldn’t feel a bit sluggish. 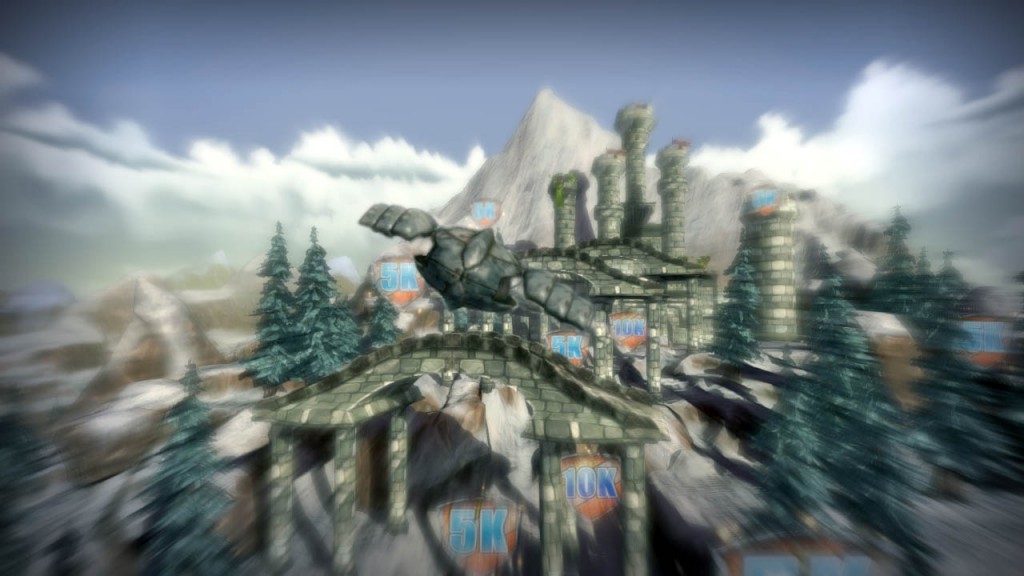 No, Wreckateer should be quick, and snappy; it should react as fast as possible to everything, it should blitz along at an absurd framerate as it showcases the destruction you’re rapidly causing. It should load nigh-instantly, so that restarting a level or moving onto the next one never gives you time to ponder doing something else. If a bite-size bit of puzzle destruction like this wants to be a compelling experience on console, that’s what it needs to do. Wreckateer doesn’t.

It’s not, fundamentally, a bad game – it’s just one with enough flaws that it’s hard to recommend. It’s a reasonable showcase of what Kinect can do when it’s not forcing you to be precise, it’s reasonably well-designed, and it offers some explosive catharsis. It’s also a bit sluggish, a bit wonky, and nowhere near as good a showcase of how to do this sort of thing in 3D as the Wii’s Boom Blox. If you’re desperate for a destruction-based puzzler, or a way to pass a bit of time with Kinect, you could do worse – but for 800 Microsoft Points, you could also do rather better.

EA Sports UFC to be developed by Fight Night team, probably still a long way off