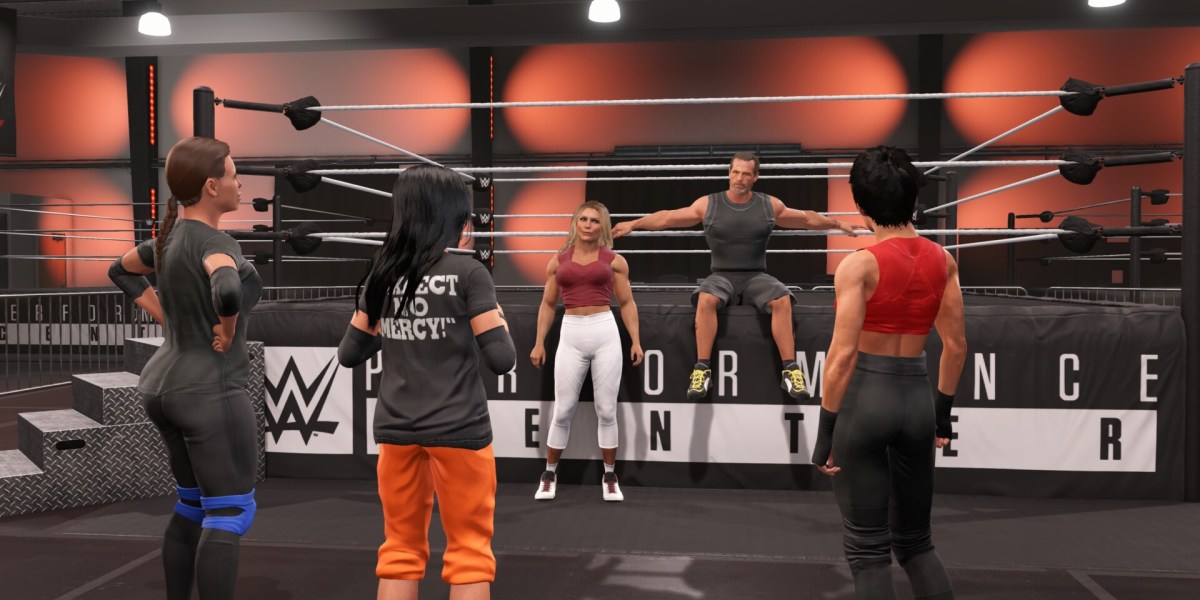 Many wrestling games over the years have had their own Career Modes. MyRise in WWE 2K22 follows in that regard, though there are some key differences. Here’s our WWE 2K22 MyRise Career Mode guide to help you with your CAWs journey, skill point acquisition, matches, and unlockables.

Note: For more information, check out our WWE 2K22 guides and features hub.

When you first start MyRise Career Mode in WWE 2K22, you’ll be able to choose between a male and a female athlete. You’ll then see a selection panel for the different backgrounds:

Note: Apart from stat boosts, some characters like your Performance Center rival, Josie Jane, will have dialogue based on your background. Bear in mind that the CAW you create in WWE 2K22‘s MyRise is only usable for this mode. You can’t choose it for regular matches or Universe Mode. Due to this limitation, it’s up to you if you want to put a lot of effort into making your own fighter. I suggest just picking a persona (i.e., costume) and being done with it.

Here are some additional tidbits: When you’ve only just started, you’ll duke it out against Josie Jane, as well as a main roster superstar who needs an opponent (i.e., Sasha Banks). After this, pay attention to the types of conversations that you’ll have, as well as your responses:

Your CAW’s attributes in WWE 2K22‘s MyRise are grouped into different categories:

You can either play to your CAW’s strengths (i.e., chosen background and archetype/class). Alternatively, you can focus on the moves that you often do in matches. In my case, I like using grapples and top-rope dives. Combine that with a slightly higher Defense so you can use reversals more successfully.

Note: Bouts in the Performance Center only provide a smattering of upgrade points. You’ll earn more once you’re on the main roster, though the storylines can be longer, too. Each show has a set number of objectives that you can complete, which you’ll see in this tab. Shows also have different locations/hubs. In some instances, you might need to revisit the same location over and over to exhaust all possible dialogue options in case you’re missing out on some challenges or storylines. After a few matches in the Performance Center, you’ll receive a PM from Kory Klein telling you about scouts from the main roster. She’ll ask if you’re ready to advance further if you still need to complete some challenges. You can choose to decline and the option will remain available whenever you click on that PM.

Once you’re set, go ahead and start the PC Showcase. You’ll face off against a superstar from each brand (i.e., Shotzi Blackheart for NXT, Lacey Evans for SmackDown, and Sasha Banks for Raw).

After beating them, you can talk to the three GMs to formally join a brand. You’ve got William Regal for NXT, Adam Pearce for SmackDown, and Mandy Rose for Raw.

Talking to a GM

Here are some of the things I saw when I went to Raw:

Note: As mentioned earlier, you’ll gain more attribute points once you reach the main roster in WWE 2K22’s MyRise mode. However, most storylines will consist of several matches, too.

Charlotte’s Queen of the Ring tourney

WWE 2K22 is available via Steam. For more information, check out our guides and features hub.

How to get Revision Zero exotic pulse rifle in Destiny 2

By Michael Licon16 hours ago
Guides

Pokémon Scarlet and Violet: Where to get Tomato

By Jason Venter17 hours ago
Guides

How to get rid of food poisoning in Green Hell

High on Life: How to beat the Skrendel Brothers boss fight

By Michael Licon2 days ago
Guides