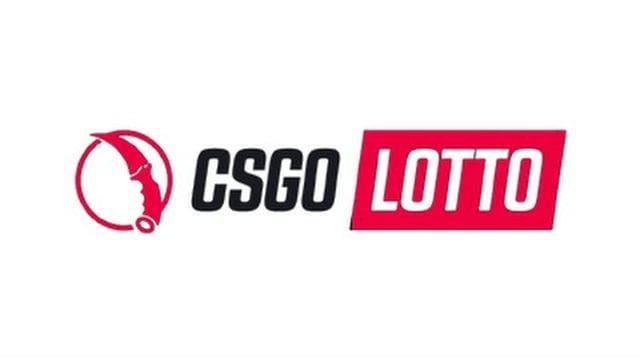 Two major figures in the YouTube scene, Trevor ‘TmarTn’ Martin and Tom ‘TheSyndicatePro’ Cassell, have been exposed as undisclosed owners of a Counter-Strike: Global Offensive ‘lottery’ site that the pair regularly advertised in their videos.

After their ownership of csgolotto.com was brought to light, Martin claimed (falsely) that he was not one of the company owners at the time his videos were recorded. He then attempted to cover his own tracks further by retroactively altering video summaries and adding reference to his involvement in csgolotto in his twitter profile.

In their videos, Martin and Cassell (the site co-owners) pretended to have ‘discovered’ csgolotto and then depicted themselves making sizeable wins, urging viewers to try the same thing for themselves. This is the textbook definition of shilling, and the non-disclosure is explicitly forbidden under Federal Trade Commission guidelines.

Ethan Klein of h3h3Productions has played the major role in compiling the details of this story. His video (also posted below), uploaded 3 July, provides credit to those who dug up the original company ownership documents and exposed the deception, and offers an informative overview on the topic of CS:GO gambling.

For an even more in-depth look at the growth of third-party CS:GO lottery/betting sites, this Bloomberg article (also referenced in Klein’s video) is a good place to start.

The brief version is this: CS:GO items earned from opening virtual in-game crates can be wagered on third-party sites. It’s possible to use them to bet on eSports matches (though this may have become less attractive after instances of high-profile match fixing came to light early in 2016), but also on slot machine style lottery sites such as the one owned and operated by Martin and Cassell.

While the majority of trades and ‘wagers’ take place in Steam currency, other third-party sites make it extremely easy to cash out your items for real money. 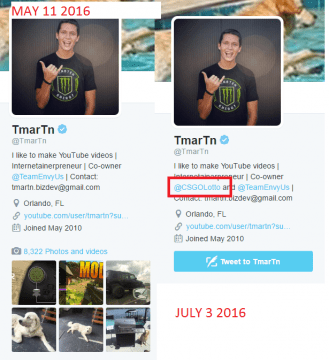 Martin attempts to cover his tracks.

Martin and Cassell’s non-disclosure of their shilling is forbidden under FTC rules (as well as being blatantly dishonest); but whether slot machine-esque sites like the one they run technically fall under ‘gambling’ is much less clear. The Unlawful Internet Gambling Enforcement Act that restricts online gambling in the US has specific exceptions (thanks in part to heavy lobbying) for real-money Fantasy Sports and other ‘skill-games’.

It’s clear that sites like csgolotto are attempting to define themselves in a similar manner. On that site’s ‘How It Works’ page, the process is characterised as: “You control the total value of your skins by using your skill, ability, and effort to select skins with desirable factors.”

CS:GO betting may be a subject where the reality is currently awaiting legislation to catch up, but the FTC rules are clear on non-disclosure of endorsements and outright shilling. Cassell should know, as he’s a serial offender in this area. In August 2015 he was one of the YouTubers caught promoting the game Dead Realms without disclosing his own financial ties to the game.

Cassell was also named in the FTC ruling against Machinima, which charged the company with “deceptive advertising” in endorsing Microsoft’s Xbox One console and related games.

“In his videos, Cassell speaks favorably of Microsoft, Xbox One, and Ryse. Cassell’s videos appear to be independently produced and give the impression that they reflect his personal views. Nowhere in the videos or in the videos’ descriptions did Cassell disclose that Respondent paid him to create and upload them,” the FTC complaint states.

For his Machinima work, Cassell was paid $30,000 USD. That’s likely to be peanuts compared to what he and Martin earned through their undisclosed ownership of a CS:GO lottery business. Despite multiple offenses, Cassell has faced little punitive judgment over his actions to date. With the law still struggling to keep pace with the dramatic rise in paid YouTube ‘influencers’, it remains to be seen whether this affair will prove to be any different.

Update 4 July: Video Game Attorney Ryan Morrison confirms that the actions of Martin and Cassell were illegal, and have been reported to the FTC. Esports Team Envy, of which Martin is a “minority owner”, have distanced themselves from both him and csgolotto.