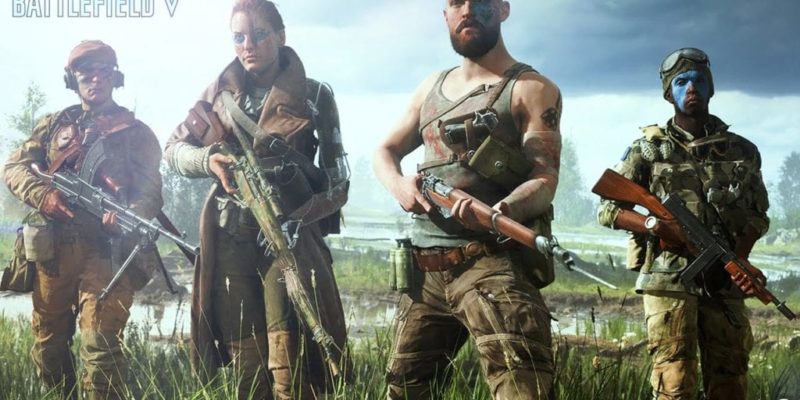 This evening Battlefield V was confirmed as being set in WW2 and the development team wanted to go back to where it all started. The team is confident they can deliver a WW2 experience that’s never been seen before. They want to take players to new locations and take players on a journey with a modern take.

The team describes it as “the most immersive battlefield” and with war stories and now co-op is also back. Players will be taken on a journey through WW2. DICE is building on previous games and pushing new features in this latest Battlefield while bringing back classic modes.

In Battlefield V players are automatically assigned to a squad to work as a team and ultimately help to resupply and revive each other in battle. Players will also jump into a third-person view of their squad mates prior to respawning with the squad which will mean careful timing when respawning back into the game. Voice and text chat will also be available between members of a squad whether it’s in-game or even the menus. Squad points are also accumulated as your squad progresses and can be used to call in v1/JB3 rocket strikes, supply drops,  smoke barrages and squad-only vehicles. There’s a real emphasis in teamplay which should be welcomed by most players.

Operations are back as Grand Operation with multiple game modes over multiple maps. It’s operations from Battlefield 1 but only bigger. Spread over four days, players will evolve and have a final showdown on the fourth map and fourth story. Assuming players can reach the fourth day, they will reach the Final Stand where the sides will have to wipe each other out and there are no respawns. It’s a sudden death mode where players will need to try and keep their squad alive to win the battle. It would not be surprising if DICE simply added a Final Stand mode to satisfy the battle royale crowd at some point.

Co-op is back and it’s called Combined Arms. They want to allow you and up to a further three players jump behind enemy lines. The stakes are high and it will be a matter of win or lose. These will be played out on randomly generated mission objectives.

War Stories also return following their appearance in Battlefield 1 to tell teach players more about WW2 and the people behind the stories of the war.

Weapons and vehicles such as iconic aircraft and tanks as well as secret WW2 weapons which can turn the tide of battle. Vehicles mentioned were the Tiger 1 tank, for weapons the MG-42, and in BF5 there’s a toolbox that replaces the Battlefield 1 gas mask which can be used to set up fortifications and change the battlefield’s dynamic. Fortifications allow players to go and fortify buildings, build foxholes, set up machine guns. It’s a counter to the destructive environments.

Other changes worth noting include each weapon having its own recoil pattern, bullet penetration through walls depending on the weapon, no more visual recoil, ability to couter grenades by chucking them back or shooting them, crashing through windows, and more we’ll learn about in the coming weeks.

New for Battlefield V is something called The Company which is your personal collection of customised weapons, soldiers, and vehicles that you can tweak and grow as you play. How you change these will not only change their appearance but how they perform in battle. It also sounds like players will be able to change on the fly in battle to bring the right weapon, vehicle or soldier to suit the battle. In other words, soldiers will level up and unlock new perks and weapons. There are four classes, assault, medic, scout, and support.

DICE says that all this progression is earned by playing and not by loot boxes. There is no pay to win and you cannot pay to get an unfair gameplay advantage. There is also no more Premium Pass. No more paying for maps and modes.

Tides of War are themed chapters of WW2 and will be available to everyone taking players on a journey through WW2 with daily, weekly and monthly events. DICE want to keep the game fresh and constantly evolving.

It certainly sounds like EA and DICE has learned from the mistakes made with Star Wars Battlefront 2 and only cosmetics can be purchased with real money but can also be earned by playing.

Battlefield V is coming this October starting with first chapter which is the fall of Europe and the German war machine moves through Europe. 11 October on Origin Access, October for the Deluxe Edition, and 19 October for the Standard Edition are the launch dates.

I will say that this trailer had annoyed a segment of the gaming community because there is a female soldier in the trailer. Women did play an active role in WW2, especially in the Soviet army and French resistance. The Soviets did allow women in front-line roles. Women also crewed searchlights, antiaircraft guns, and played a part in intelligence and sabotage dropping behind enemy lines (SOE), worked as mechanics, nurses, building the war effort, and more. They played a huge role and it’s disappointing to see gamers today get annoyed by a game trailer featuring women. If it had not been for the women, the allies would have struggled to win the war and everyone should be thankful for their efforts. It’s extremely fitting they are represented in the game.

Now watch the quite stunning Battlefield V reveal trailer featuring tanks, planes, V1 rockets and even cricket bats. It’s perhaps a little tongue in cheek but I think DICE are trying to convey the need for teamwork and camaraderie.

If you missed the reveal show, you can watch that here.

DICE respond to Battlefield V complaints with “fun over authentic”