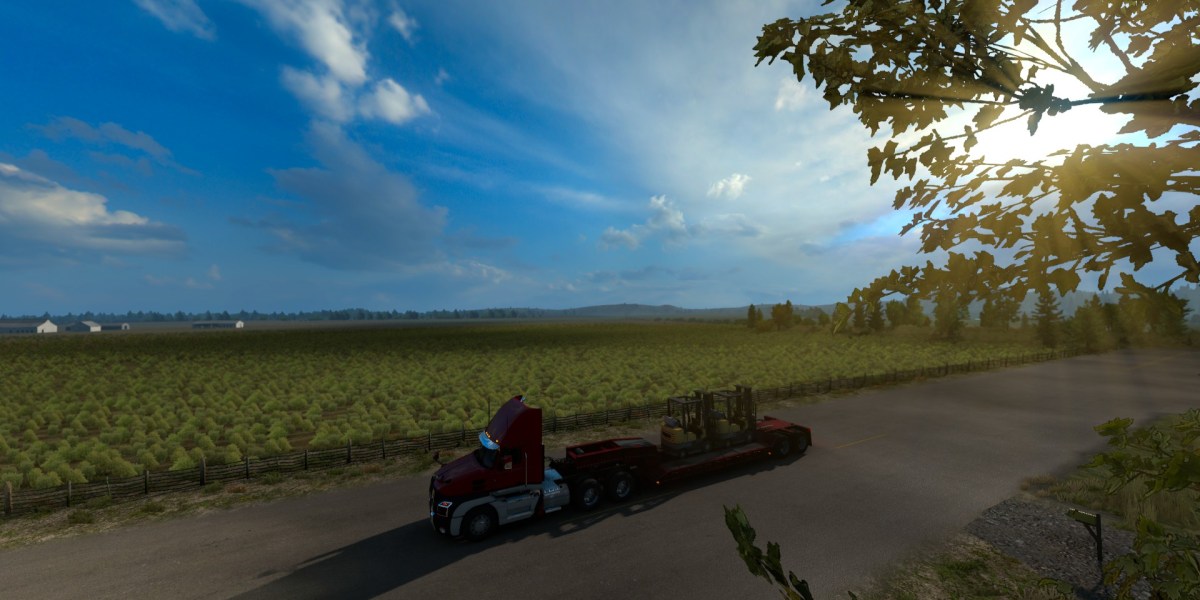 Like I’m sure is the case for many of you, you may only know Idaho as far as the fact that it’s the state known for growing a whole heap of potatoes. And potatoes make french fries, tater tots and hash browns—so, therefore, Idaho is automatically one of the best places on Earth. But, truthfully, I really didn’t know much about Idaho outside of its farms. And, it’s not exactly up on a lot of “hottest tourist destinations” lists, so I’ve never visited. After spending some time with it in the world of American Truck Simulator – Idaho however, I really would love to take a real-world road trip through this gorgeous northwestern state that is depicted in this DLC. So, the question stands – is it worth it? 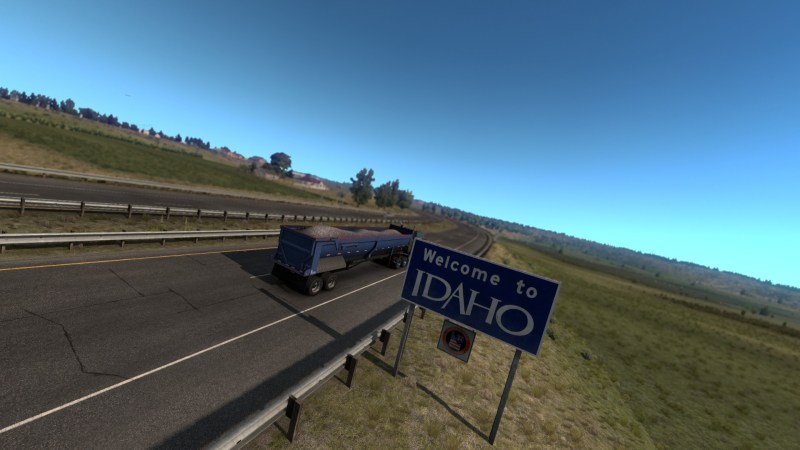 My American Truck Simulator – Idaho journey started in the central east, with one of the Washington border towns, Ontario. From there, I moved into Idaho and headed towards Twin Falls as the first stop. As I gazed around the new state, to be honest with you, I wasn’t really all that impressed. While I thought it was generally okay, nothing really caught my eyes at first. That was, until, I crossed the Perrine Memorial Bridge, which is just outside of Twin Falls along US Highway 93. My jaw literally dropped as I made my way towards the center of the bridge, which hangs stunningly over the massive Snake River that’s being fed by gorgeous, roaring waterfalls. Very handily enough, on the side of the road was a turn off lane that had a new Scenic Viewpoint hovering above it. It looks like American Truck Simulator’s scenery designers were so confident in their work that they added this new feature just for the sake of flexing. But, by all means, they deserve it.

There are various Scenic Viewpoints scattered throughout Idaho (which do account for a Steam achievement). They’re just small cutscenes that show off the surrounding, but boy is it a treat to just sit back and see the virtual natural beauty play out in the equivalent of an in-game drone shot. So, I highly recommend keeping on the lookout for the little purple and white circles that will appear on your GPS unit as you explore. 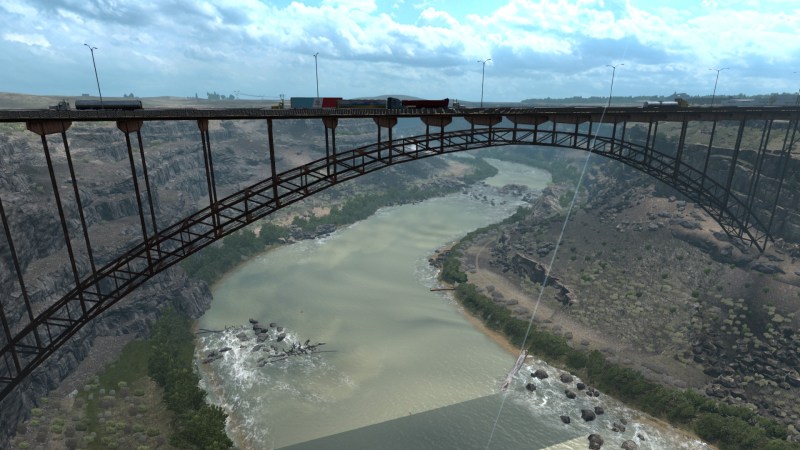 After Twin Falls got the party started, the state really began to open up as I moved northward to Idaho Falls. The “country” was on full display here, with lots of farmland and the first hints of the state’s dry, rocky elevation. Idaho Falls does live up to its name as I happen to cross a small bridge (which also overpasses Snake River) that features some smaller falls of its own. Thanks to the new FMOD functionality for American Truck Simulator, the sound environment was really pushed here as I clearly heard the roar of the falls in the distance while crossing the bridge. I’ve been near a few falls in my life, and the sound of thousands of gallons of rushing, roaring water simulated here was spot on. That said, the attention to detail throughout the state is notable. Every object in the scenery looks very deliberate (and it is as SCS tries to match real-world imagery). But, like the other DLC, driving through Idaho felt truly authentic at almost every turn. Though I’ve never been, I feel that if I ever did go, it’d be easy to spot what made it into American Truck Simulator’s rendition of the scenery.

I primarily noticed this as I moved on from Idaho Falls northward into Salmon. It sports some rustic areas that have things you’d expect like dilapidated buildings and derelict vehicles. Normally, stuff like this would be an eye-sore, but in-game it manages to fit the theme of the surrounding area. What else do you expect to see in the backcountry other than a ton of fields, rusty trucks, and makeshift shacks?

Moving along into the northwestern part of the state, Idaho’s aforementioned elevation really comes into shape here with a lot of hills and mountains that push into the horizon. Driving along State Road 84, you can clearly see where chunks of mountains were blasted through to build the road, leaving you surrounded on both sides by huge columns of solid rock that look extremely cool up-close. 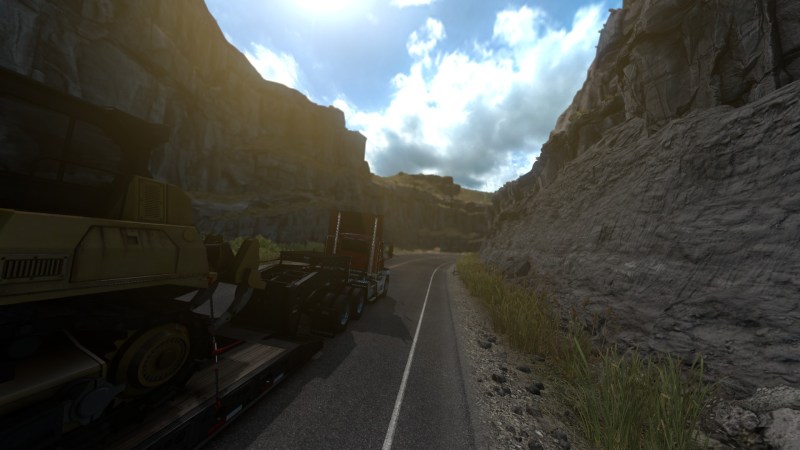 Idaho has some serious rock formations and mountain ranges.

Salmon is currently all by its lonesome in a little corner of the map. There aren’t any roads in-game that connect it to the other northern settlements. So, to continue my journey to the next city of Grangeville, I had to backtrack south and swing to the east before heading north again. Most of this drive took place at night, but the trek would surely be worth it in the end. Not too far outside of Grangeville is the town of McCall (which is not one of the mapped settlements in-game). I entered it as soon as the sun began to rise, and the results were dazzling. The architecture and landscaping are beautiful, and the surrounding area with its lake/river and mountains is absolutely gorgeous. There’s another Scenic Viewpoint located here, so I highly recommend checking it out on your way to the extreme (and thin) northern section of Idaho.

A state rich in character 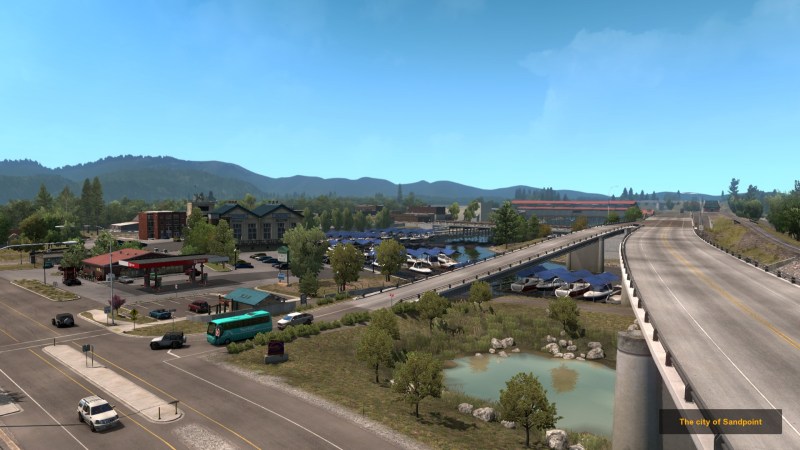 Sandpoint is one of the more affluent cities in the state.

This is truly the most beautiful part of the state to me, as continuing the drive into Grangeville was equally as gorgeous. There are more rivers, valleys, bridges, and even some elevated roads. Seeing all of this for the first time baked in beautiful dawn twilight was superb, and great timing on my part. After Grangeville lies Lewiston, further north, which sits next to Clearwater River. After that, I tackled the final two towns of Coeur d’ Alene and Sandpoint to the extreme north. Both are absolutely gorgeous cities, which appear to be very upscale. Their architecture is far more modern and the landscaping is very preppy. They really stand out from the rest of the state, and definitely deserve the journey to see for yourself.

Clearly, it should be clear that my answer to the question in the title of this piece is “Without a doubt!” SCS has once again proved why American Truck Simulator (and ETS2) has managed to truck along for several years now, and player interest and engagement remains so high. 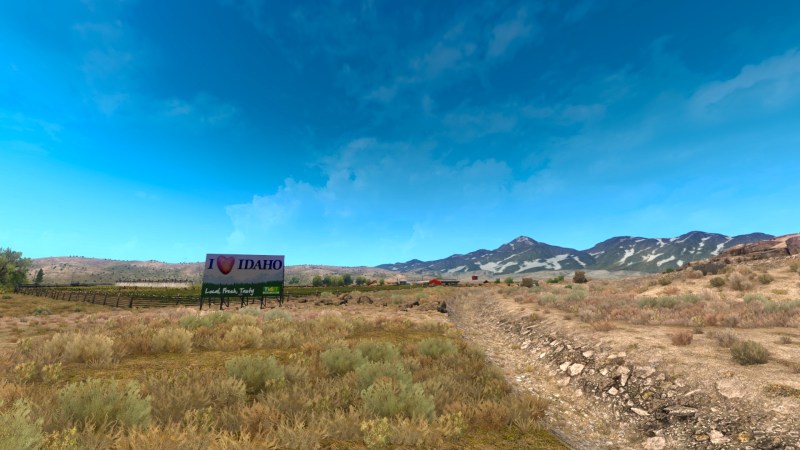 As a nature lover, Idaho really impressed with me with a heap of views from the extreme north, almost all the way down. My screenshot gallery is full just from my four hours of playtime to visit every city. So, definitely check it out if you’re ready to conquer a few new thousands of miles of asphalt. And with red historical signs to find, scenic viewpoints to view, and potatoes to haul, Idaho should keep you occupied for a good chunk of time as we await the next state in the American Truck Simulator pipeline—Colorado!