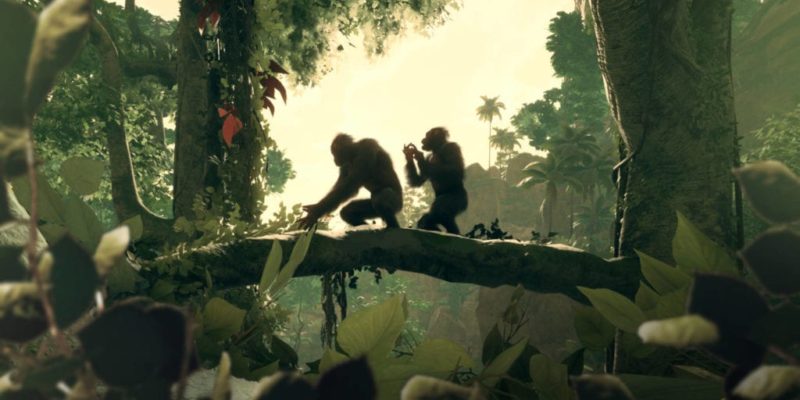 In Ancestors: The Humankind Odyssey, new generations and clan evolution will be a key part of your journey. Through these, you will acquire new skills, mature genetic mutations, and become a more advanced hominid.

To advance your lineage and unlock new skills and genetic mutations in Ancestors, you’ll need to advance to the next generation. To do this, lay down at a sleep spot, go into your Evolution menu with ‘Y’, and move over to the generation screen. Essentially, this will move your game 15 years into the future, turning all of your babies into adults, adults into elders, and elders into piles of bones. It will also establish any matured genetic mutations as permanent nodes on your neuronal chart. This is crucial to unlocking more advanced skills like bipedalism.

To prepare to move to a new generation, you’ll want to make sure you do a few things. First off, decide which skills you want to reinforce. You will only be able to reinforce a certain number of skills for each generational jump. This amount is determined by how many children are born in the current generation. Make sure to keep an eye out for potential new clan members as you are exploring, as they will give you another breeding partner when brought back to your settlement. That, of course, leads to more reinforcement points. 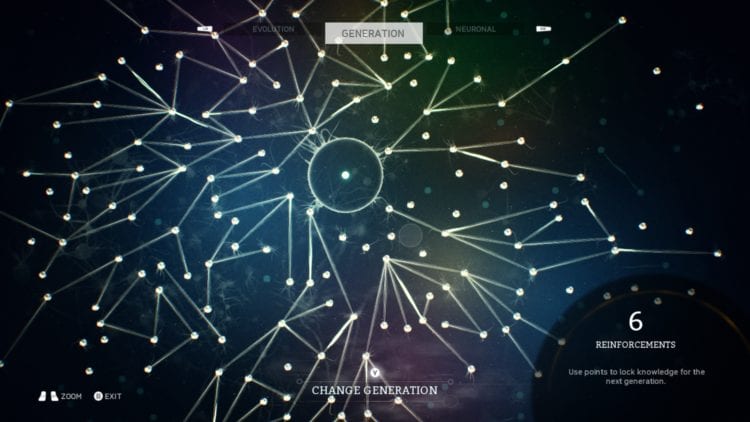 Skills that can be reinforced are skills which you have unlocked and learned in the current generation. They will appear brighter than the other nodes in the chart. All you need to do it put your cursor over them and click on them to reinforce them.

Make sure you unlock skills before changing generations!

Skills that are not reinforced can be lost between generations. A good remedy for this is to make sure you unlock nodes that you do not reinforce. These skills will not reset once you move onto a new generation. Learn these new nodes as soon as you can so that you can continue to build your Ancestors skill tree. 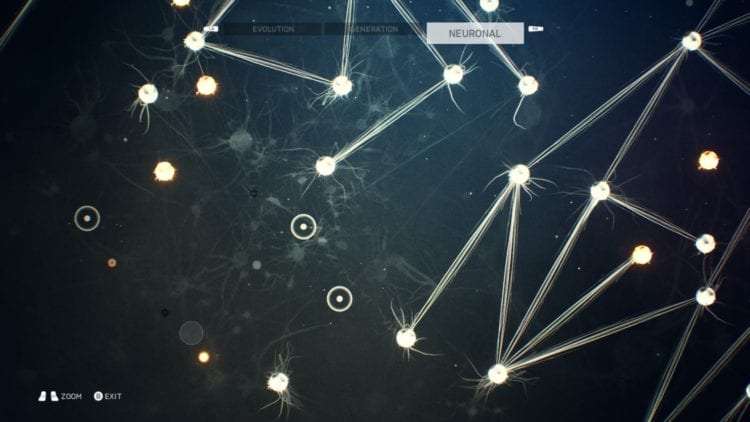 Skills that have been unlocked will have a white ring around them. These will last the transition to a new generation.

Once you’re ready to move on, hit the ‘Y’ button to move the clock forward. When you’ve settled in this new generation, get started by mating all of your eligible adults. That way, if any of your adults are killed for whatever reason, you will still have their offsprings. These will grow to new adults later on and help you reach the maximum number of babies your settlement can produce. If you do lose an adult, you’ll want to spend time searching for new clan mates to breed with. That will let you advance generations with as many reinforcement points as possible. If losing a clan member leaves you with an extra adult female, you can always grab an elder male to be their mate.

When you’re ready for a large jump forward in time, it’s time to initiate an evolution. In your evolution menu where you access your neuronal chart and generation tabs, there is a third menu for evolution. From this screen, you can see a bunch of handy information. It will show you your birth/death ratio, your playtime, and what stage you’re at in the evolution. You can also access your evolutionary feats, which are necessary when you’re ready to evolve. Most importantly, this screen is where you can start your evolution by simply pressing ‘Y’ (so long as you’ve met the necessary criteria). 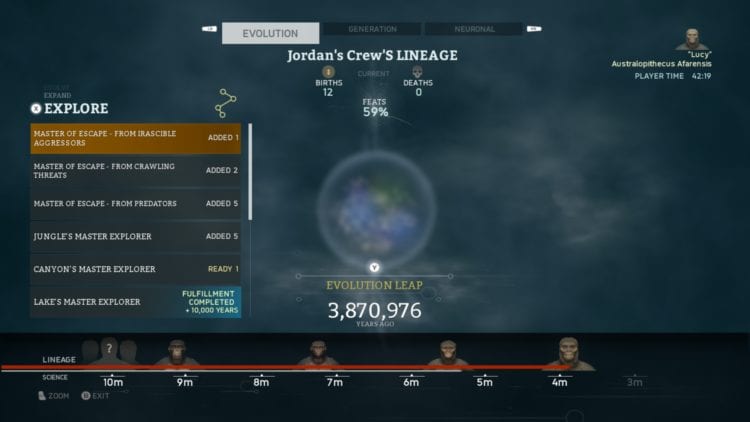 In order to evolve, you will first have to pass one generation, have at least one newborn clan member, and have completed at least one evolutionary feat.

Evolutionary feats are accomplishments that you’ve done since your previous evolution. You can access this menu to see what you have already completed and what else needs to be done. Essentially, you will unlock evolutionary feats by exploring, killing/dodging aggressors, and finding items of interest (like meteors and precious stones). When you hit a new milestone, Ancestors will tell you in the top of the screen.

The further along you get, the harder it can be to obtain more of Ancestors‘ evolutionary feats. You’ve likely already done many of them, after all. This will require you to trek to new locations to find new wildlife (which you can attack and dodge twice to gain a feat) and oases. If you are still struggling, jump into the evolutionary feats menu and look for things that you can easily complete. A lot of times, there will be animals who you’ve attacked enough times to trigger a feat, but you might not have successfully dodged them. If that’s the case, go pick some fights and then run away! 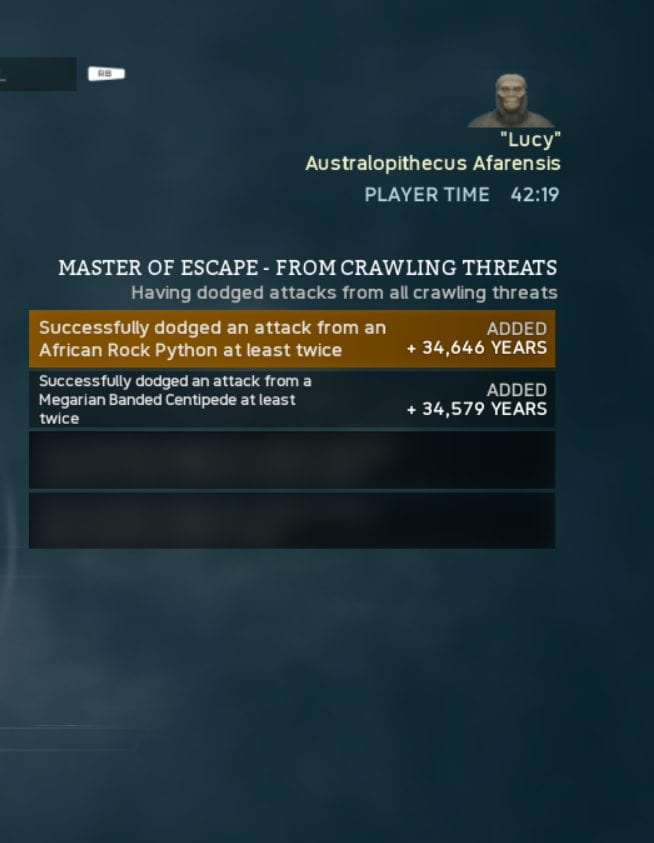 You can also find meteors by climbing up somewhere high and searching for smoke (if it has hit the earth recently). A cutscene will also play when a meteor falls. They seem to trigger after you’ve discovered a certain amount of locations. I’ve also had decent luck discovering precious stones, like the sapphire, in caves that you can stumble across all over the world. If you take the plunge into a cave, though, be warned that there are millipedes and spiders, the size of which will make your skin crawl.

Once you’ve met the requirements for evolution in Ancestors, jump into the screen and hit ‘Y’. You’ll be treated to a cool little summary of all the things that you’ve accomplished. Be warned, though – a lot of the time, evolution sends you forward in time to a totally new settlement. So, if you’ve stockpiled weapons or have been holding onto that special rock, they will not make their way to this new settlement. They will still remain at your old settlement, though, and you can seek them out. You might also be returned to that same location after a later evolution. 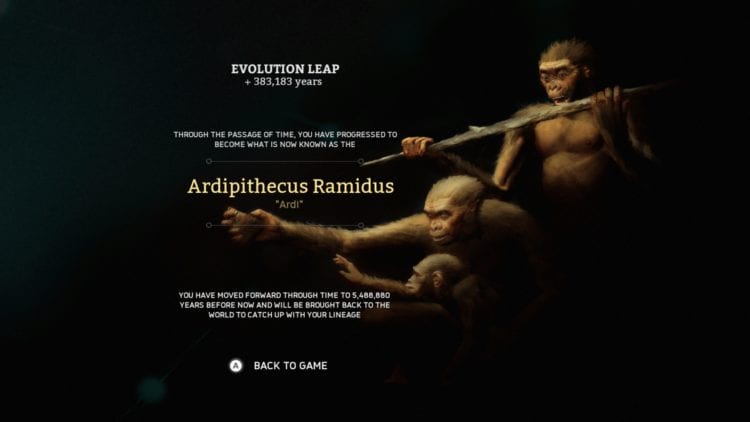 When you evolve, you might also turn into a new form of hominid. Slowly, Ancestors: The Humankind Odyssey will make you start to resemble what ancient men and women are believed to have looked like. This will come with newly unlocked skills, new voices, and a handful of other things. This won’t happen every time that you evolve; rather, it looks to be based on when you pass a certain point in time.

Evolution is a key part of the game, so make sure to take the time to learn how it works and understand Ancestors‘ new generation advancements and feats.