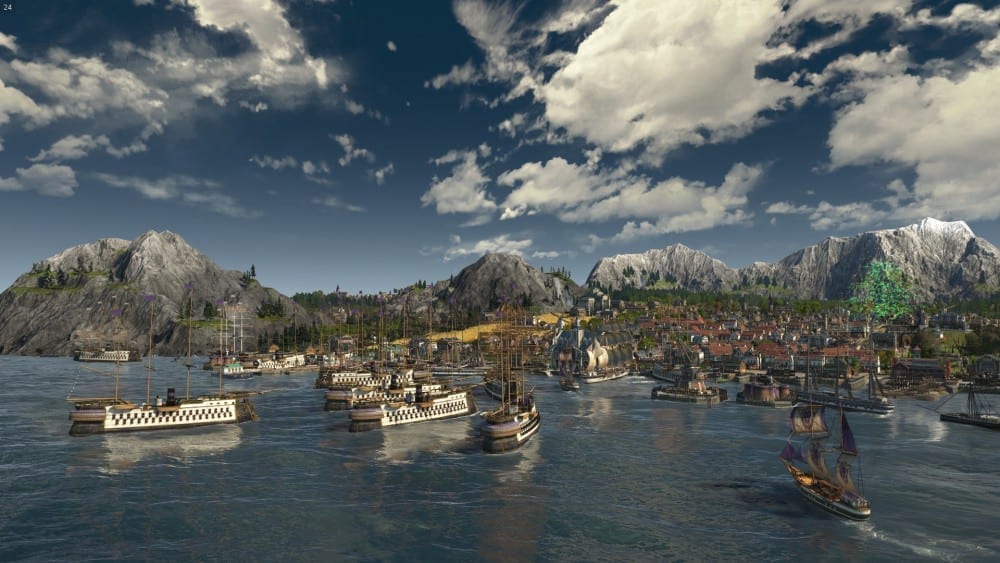 Given my familiarity with strategy games, including city-building and management sims. Anno 1800 should be right up my alley. Indeed, Anno 1800 is a marvel to behold. It’s visually stunning and impeccably sublime. However, as noted in our technical review, there can be performance issues. Worse, there are some glaring flaws with its gameplay mechanics and design choices that can be detrimental to your enjoyment. Before we talk about the bad news, let’s go ahead with the “Goode” news first. 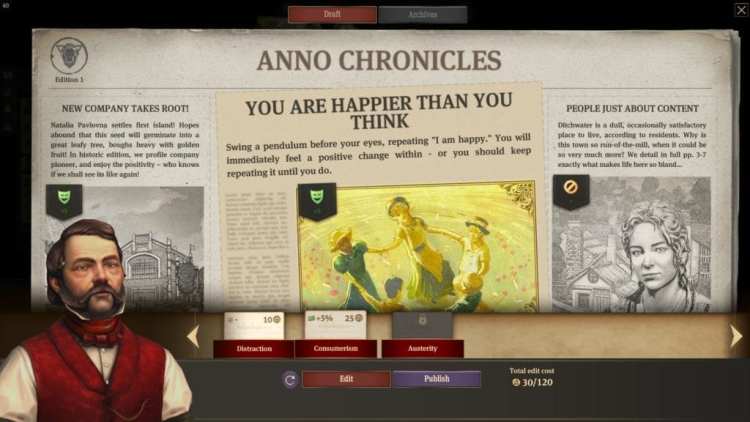 And no, “Goode news” doesn’t mean the kind you can tweak in the game via your paper’s editor.

Anno 1800 features an engaging campaign as well as a sandbox mode. For the campaign, your character and your sister — the Goode siblings — are out to clear your father’s name. Do be wary of the machinations of your uncle, Edvard, who’s your typical Dickensian villain. There are a couple of twists along the way leading to a final battle. The story isn’t the engaging part, rather, it’s the features that will keep you entertained.

You’ll need to slowly develop your tiny island from a wilderness devoid of human life to a city that is the envy of the world. To do that, you’ll have to build markets, warehouses, residences, farms, pubs, churches, and everything a thriving village needs.

Later, you’ll meet a diverse cast of characters. You could go on quests and expeditions, all to uncover a mystery. You might even find yourself in the New World. 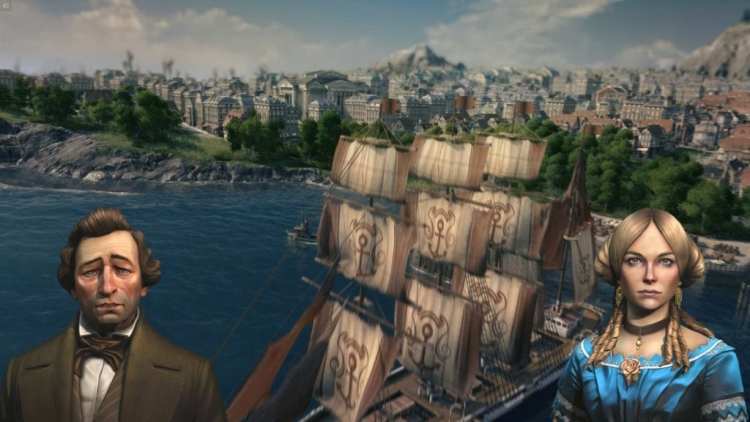 Most of your playthrough will involve numerous balancing acts. The Industrial Revolution is in full swing and Anno 1800 requires you to pay attention to your workforce. Citizens are divided into tiers, and production chains are dependent on citizen types. Your farmers can handle woodworking, fishing, and crops at the start, but they don’t work in mines or canned food manufactories. You’ll need to upgrade them to workers.

If you upgrade your island’s population to the next tier too quickly, you’ll run out of laborers from the previous tier. Too many people focused on making weapons, luxuries, or engineering feats? Then, that could mean no one’s around to till the fields or cook sausages. 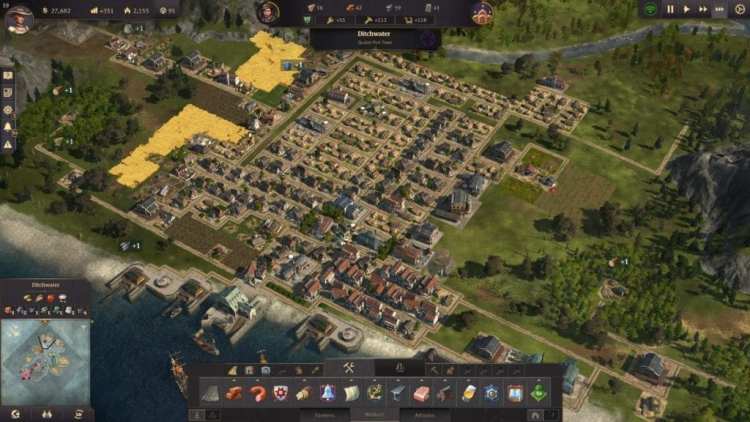 The aptly named island of Ditchwater.

It’s not just your citizen tiers that need balancing but also their needs and happiness. These two facets are separate and distinct from one another. Satisfying basic needs such as clothing and food for a particular tier might sound acceptable, but citizens also need entertainment complexes, luxuries, and even an alcoholic beverage or two. Neglecting their needs prevents residence/tier upgrades. Meanwhile, neglecting their happiness leads to riots.

Likewise, your populace needs utility and public services such as schools, churches, police stations, fire stations, and more. And, of course, you need to strike a balance between the advancements of industry and technology, and the natural beauty of your islands. Nobody likes it when your entire locale is covered in soot and smog. 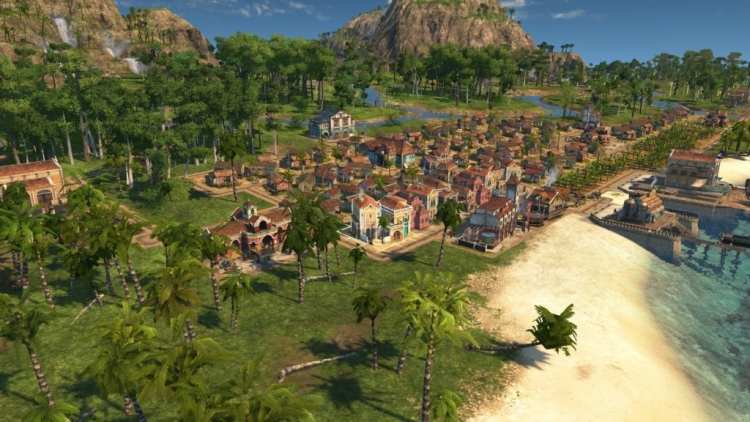 A modest new beginning in paradise, aka. the jungles of the New World.

Where We’re Going, We Do Need Roads

You’ll also need to effectively balance and manage your resources, including gold. The blueprint mode/feature is exceptionally helpful as it allows you to place your projects first and plan your entire city without using up resources. Likewise, a majority of structures require a nearby warehouse where goods are stored.

Logistics doesn’t become too complicated because all you’d need are roads. All roads may not lead to Rome, but they do need to find their way to your trading post by the sea.

As such, you can wait until your island is self-sufficient when it comes to resources, and gradually, your stockpile should continue to grow provided you managed things well. Alternatively, you can just trade. 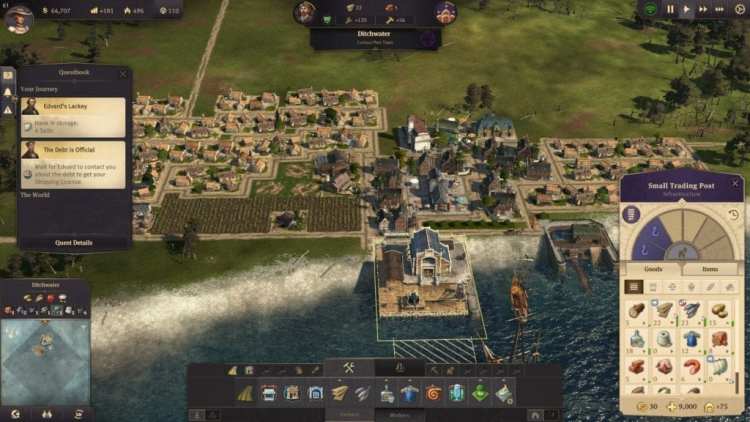 AI merchants will drop by to sell or buy stuff from you depending on your selection for your trading posts.

Anno 1800’s map is comprised of numerous islands. Diplomacy will allow you to create trade routes from your island to the AI’s, and vice versa. Everything’s fine and dandy until you realize that there’s something missing. You don’t actually see the trade value of these goods!

That’s one of the first major flaws of Anno 1800. Although the automation and ease of trade can be user-friendly, the lack of clarity for this mechanic will have you scratching your head often. 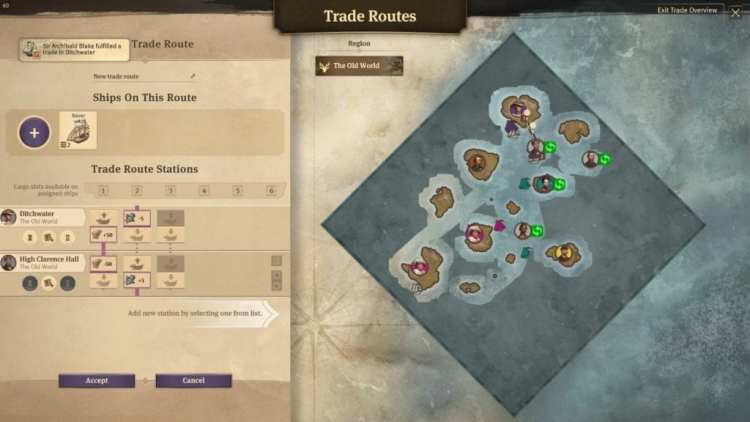 Effective use of trade mechanics is paramount to your success. Too bad it’s not that transparent or informative.

At one point in time, I decided to create a trade route to sell potatoes and coal to an AI’s island because these were what the AI wanted. I couldn’t see how much I’d be earning, except that my income kept fluctuating. I had to check my trading post from time to time since the actual trade route page doesn’t have anything of note.

Apart from the vagaries of trade and income, you might end up wondering what’s going on with your workforce. While disasters such as fires and riots are readily seen, others might leave you perplexed. Mousing over your craftsmen won’t really tell you what’s going on, just the available labor pool and associated jobs. You’ll need to click residences to see if certain needs/luxuries are missing. Even then, you’ll ask how much of each good has to be reserved just to meet their needs or keep them happy. Micromanagement does become tiresome after a while. 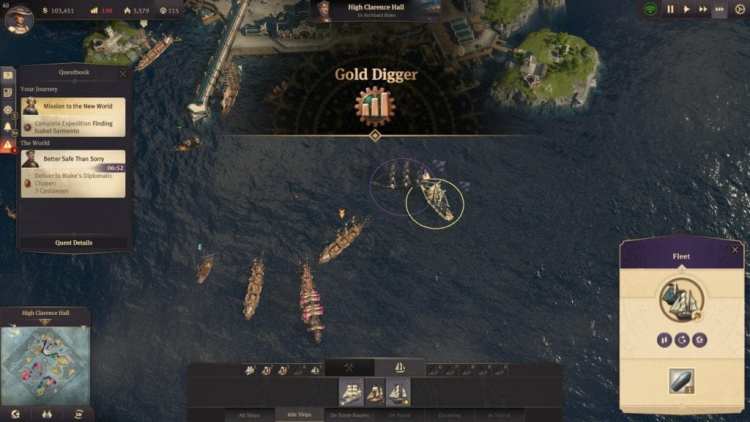 She take my money, when I’m in need. Also, it happens sometimes when I’m NOT in need.

The fluctuations and opaque mechanics might be forgivable if the game wasn’t too darn annoying whenever it bombarded you with notifications. There are so many things going on, which is great — but the notifications become an egregious distraction. 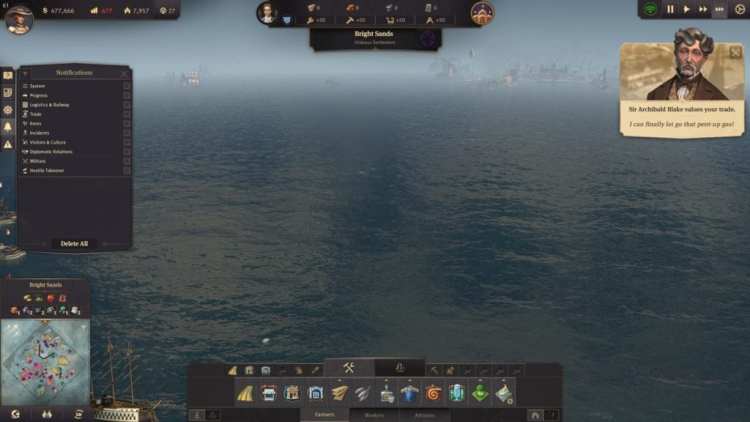 Imagine the AI telling you that it has “pent-up gas,” that you’re still “not trusted,” or thanking you for your help. It’s fine if it happens once every five minutes or so. It’s not fine when it happens multiple times every minute when you’ve got over a dozen trade routes.

This actually leads to additional problems. For instance, there are mini-quests where you need to play Where’s Waldo by looking for specific citizens or rewards. Some are easy enough to find, while others like stray dogs, farmers in various buildings, and arsonists might take a while. Those sudden pop-ups are there to distract you. Worse, this can be an issue when completing missions. There were times when the prompt to complete a mission wouldn’t fire because a couple of random NPCs decided to chime in first. 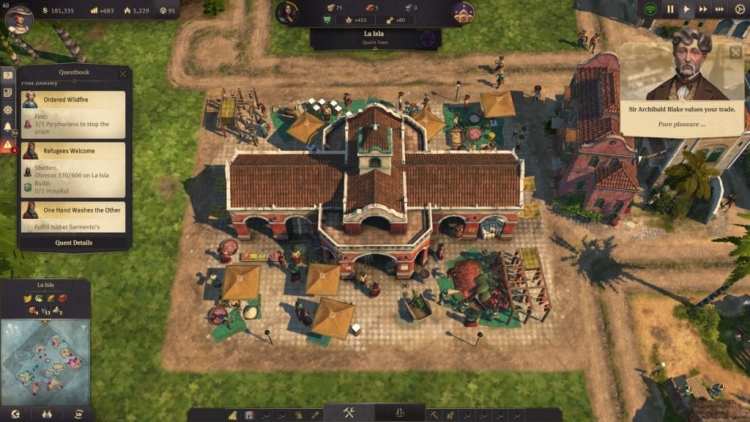 There were also flaws related to navigation and naval combat. For instance, ship pathing can be horrible. An aggressive stance makes them engage every hostile on your screen without care for their hull hitpoints. The defensive stance might not work at times, requiring you to manually direct the battle. Lastly, the passive stance turns them into sitting ducks.

You also can’t set waypoints for your fleets. If you want to avoid patrols by skirting along the edges of the map before reaching a destination, you’ll need to do this manually or check back on your units from time to time. 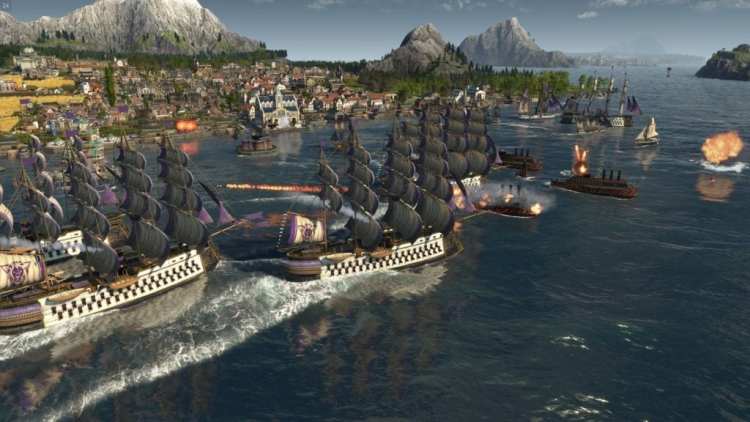 Behold my naval strategy: Wait 10 minutes for each ship-of-the-line’s recruitment, group 10-12 of them, right-click a destination, and then profit.

Naval combat, in general, just feels uninspired and tacked on. At no point in time did I feel the need to play tactically, and the AI (including pirates) tend to be passive as well even at higher difficulties.

Lastly, the minimap can be horribly misaligned. It took me a while to get used to it since clicking a location on the minimap doesn’t always center to the area you’d want. You’ll have more luck just saving a camera point and then hitting the corresponding key as a shortcut. 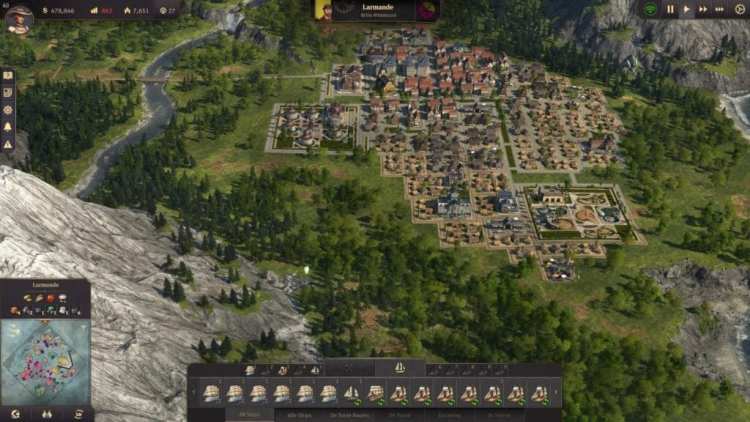 According to the minimap, I should have a wide view of the island, including its edges. That’s not the case here.

As stated above, Anno 1800 is spectacular when it comes to the graphical department. It’s a gorgeous game to look at, and you’ll be astounded and amazed once your cities are up and running. You even have Photo Mode in the form of mini-quests, and via hitting F1 which enables “Postcard View.” Heck, you can even press Shift + Ctrl + R to go into the first-person view. Go ahead and walk around the settlement you built, or just take a stroll surrounded by nature and wildlife.

Sadly, as noted in our technical review, performance dips can happen even when you’re above and beyond the recommended specs. When you’re getting sudden dips, even below 30 FPS, you know there’s a problem. 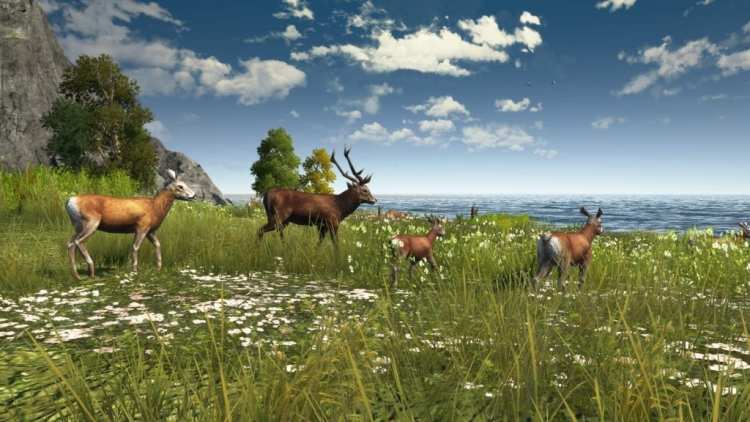 At least we have Walking Photo Mode!

City-building is a key strength for Anno 1800. I wasn’t too impressed by the campaign’s narrative since you could see the twists coming from a mile away. It was the journey — not the destination — which completely immersed me. Managing your resources, citizens, amenities, and the like was an engaging endeavor. I gave the sandbox mode a couple of runs as well, and I didn’t even realize how many hours had passed. The game even tells you how long you’ve been playing, reminding you to take a break every now and then.

Also, expeditions were fun romps. Sending out your ship along with rations, munitions, and maybe even some specialists can lead to exciting rewards. They play out akin to a “gamebook” with choices and consequences. It was a welcome addition, and I would’ve loved to have seen this feature fleshed-out more.

Unfortunately, Anno 1800 still has several glaring flaws and questionable design choices. From opaque game mechanics to forgettable naval combat, and, of course, those annoying NPC prompts and more, you’ll start wondering if this was about the Industrial Revolution or just a devolution that holds it back from being great. Parts of the game will intrigue strategy and management sim fans. Others, however, owing to the lack of mechanics or explanations, will feel as though you’re just brute-forcing your way through.

Anno 1800 is a return to Blue Byte and Ubisoft's long-running city-building franchise. Sadly, a number of flaws prove to be detrimental to an enjoyable voyage.