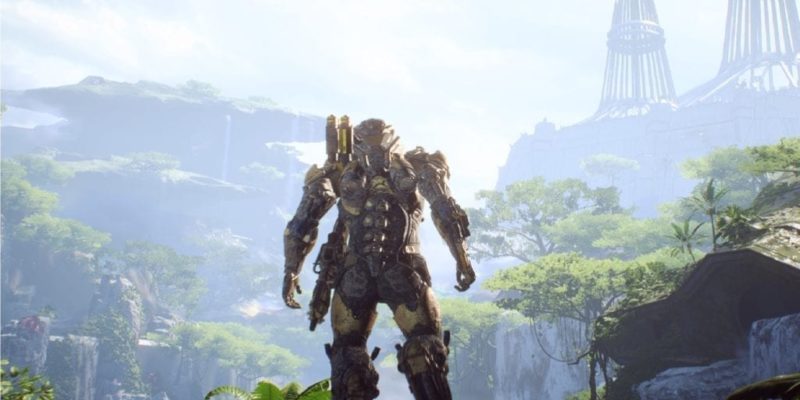 Anthem features Javelins, high-tech exo-suits designed for maneuverability and combat. Like any endeavor that involves technological marvels, Anthem dazzles its way onto your screens be it with these flying contraptions or just the world around you. I’ll add more details as we go along with this technical review for the PC version. But first, let’s check the system requirements. 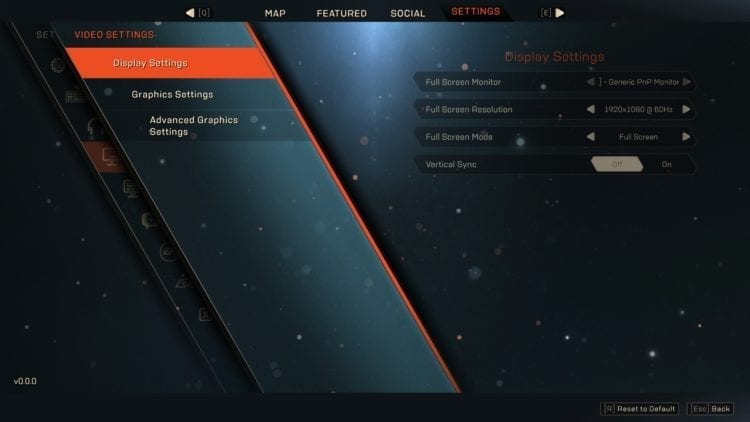 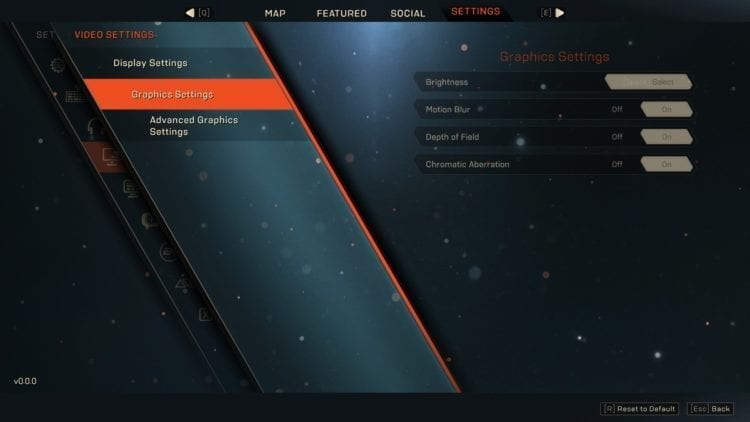 Anthem’s graphics options let you toggle settings for your display, general graphics settings, and more advanced tweaks. For starters, I have a 1080p Sony TV. That means there’s more leeway given the PC hardware that I have.

I also prefer to disable Motion Blur and Chromatic Aberration since Anthem makes you move, spin, and fly around in different directions. Given that I also encouraged my wife to play the game, I wouldn’t want my significant other to feel nauseated now, would I? If you do like that extra immersion and visual pizzaz, then feel free to keep those settings active. 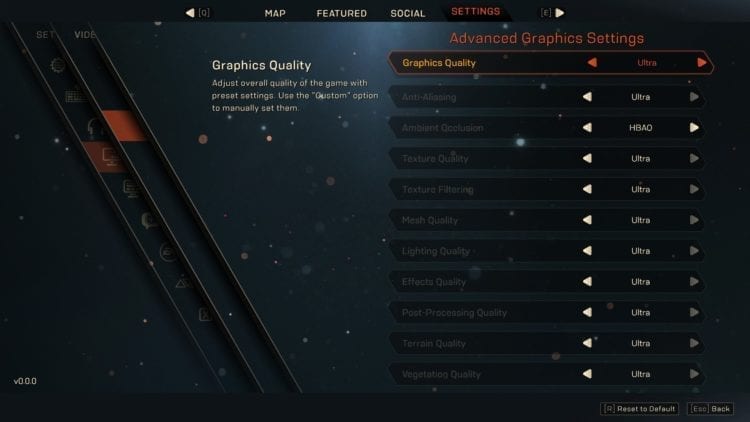 Looking at the Advanced Graphics settings (which you can see above), I’m able to use the Ultra preset, achieving 60-75 FPS on average. The framerates may dip to around 55 FPS or so, but that’s still manageable. Also, if you have an Nvidia card, don’t forget to download the latest driver which adds performance and stability support for Anthem.

If you do want more consistent framerates, or perhaps you have a different setup, then you can lower the settings as well. The High preset offers an ideal balance between quality and performance (it gives me a stable 70+ FPS).

Anti-aliasing, ambient occlusion, texture quality, and post-processing quality are your evildoers when it comes to performance hits so you might want to tweak those. Likewise, lowering vegetation quality might also help given all the trees and foliage in Anthem’s exteriors. 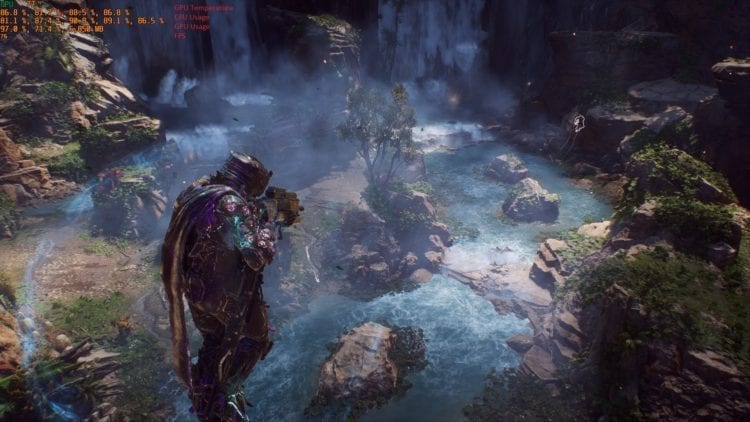 Going a little more in-depth, I ended up using RivaTuner and HWiNFO to determine my CPU and GPU’s performance while playing Anthem. As you can see in the image above, keeping it below 83 °C definitely helped before throttling came into play. Once I started hitting higher temperatures, and more enemies popped on-screen (such as the case with Strongholds), that’s when framerate dips started to happen. 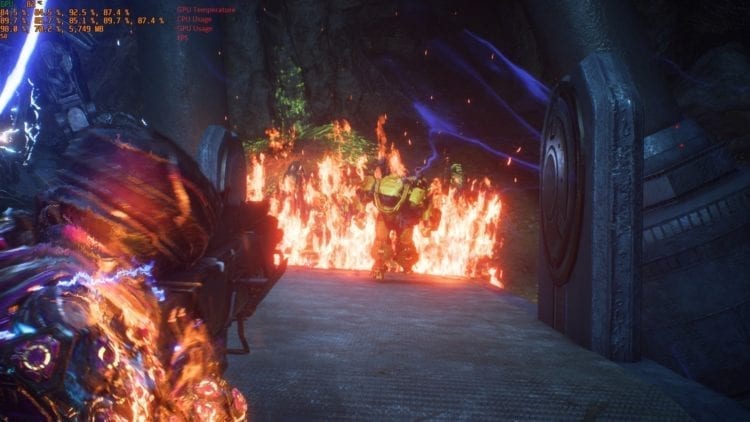 Good heavens! Is my friend burning? Is my GPU burning?

82 °C temperature isn’t dangerous, but it’s also far from ideal. This is less specifically due to Anthem since I’ve played games that’d hit this mark at times. In any case, if performance hits become too severe, it’s best to lower the settings as mentioned above. You can also see the difference between the Ultra preset and the lowest one below.

Next up, let’s compare and contrast some screenshots. You can click on each image for a larger view. First up is the NPC Owen with the Ultra preset selected: 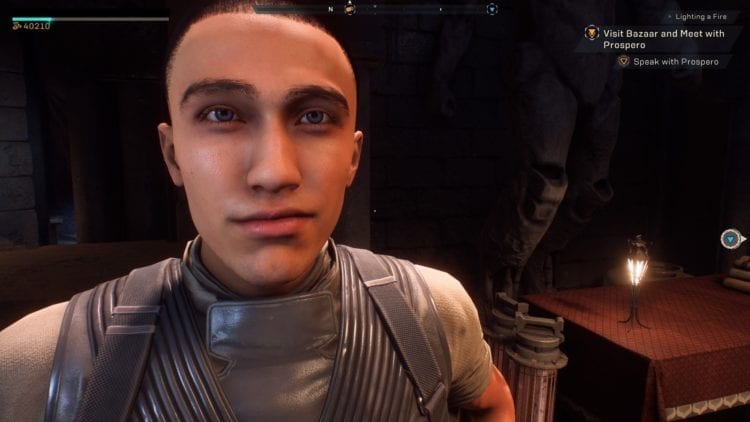 “Looks like you’re playing the game on Ultra, heh, nice!”

Now with the Low preset: 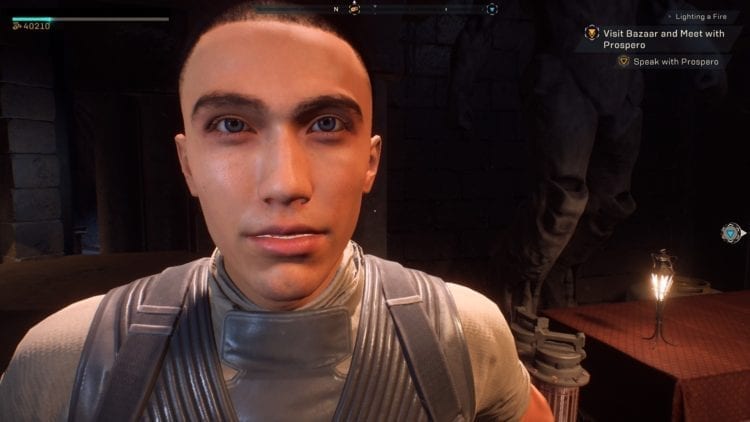 “Gah, what happened to my eyebrows? And my shirt is now made of styrofoam!” 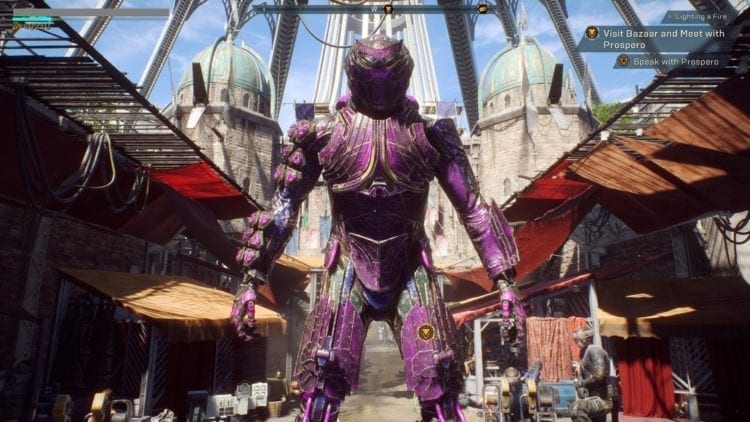 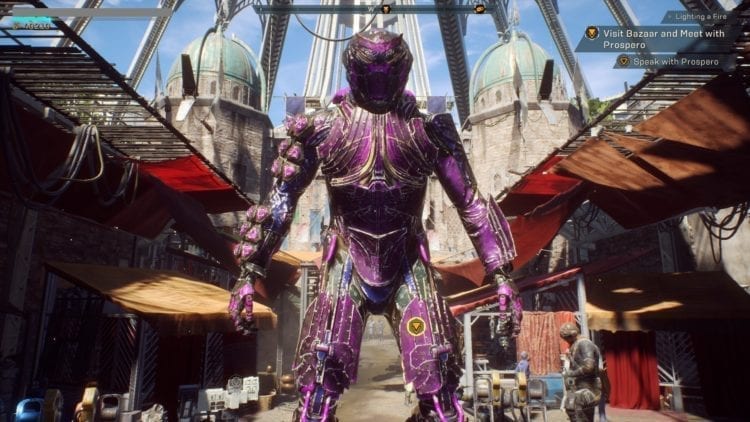 “Okay, which one of those kids started drawing on me while you were away?”

For this next set, I used screengrabs during missions. The downside when changing graphics settings in Anthem is that some will require a restart to take effect. I tried my best to replicate each moment. Here’s an in-mission mob fight: 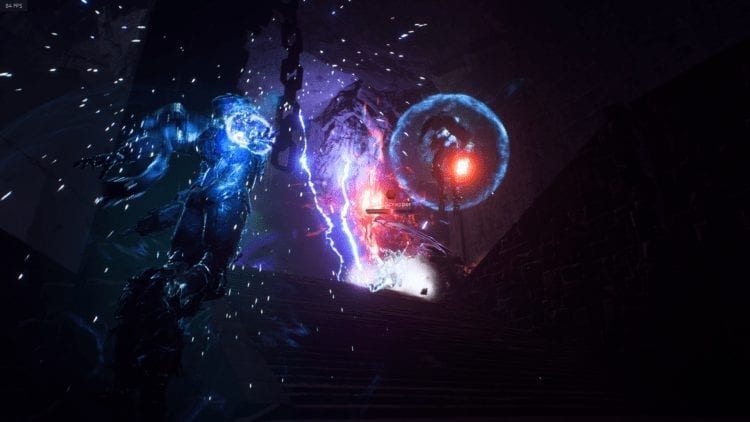 The same location on Low settings: 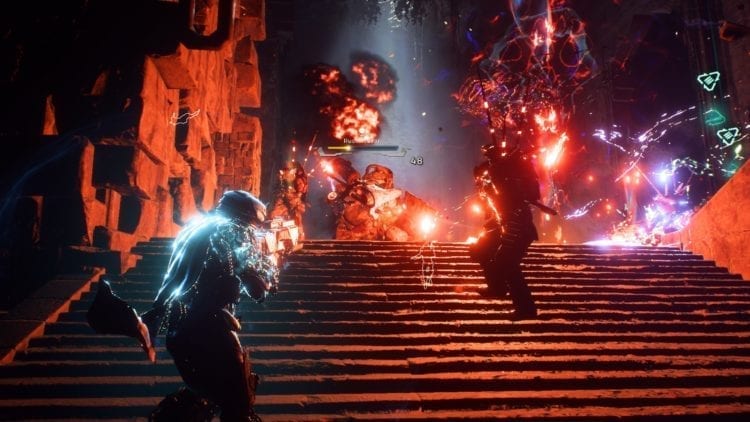 Who knew this was available for PS3 owners?

Idling after this mission (Ultra): 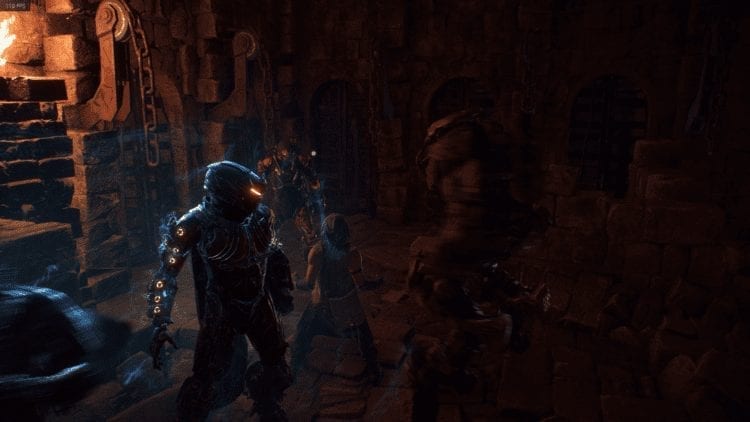 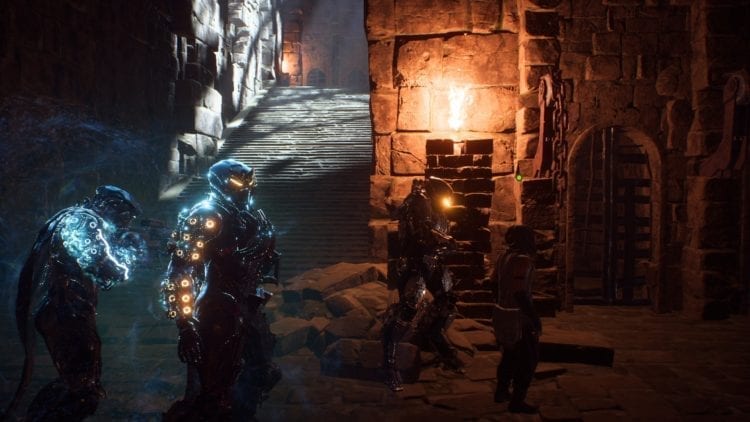 What is there a glowing jellyfish on my arm?

With the lowest preset, you’ll notice the loss of detail in certain textures whether it’s clothing or even your Javelin’s design. The metallic sheen and edges are rougher and sharper instead of contoured. Still, I’m glad it’s not as bad as in Apex Legends where text designs suddenly turn into ASCII art. The Frostbite Engine can still dazzle even on the lowest settings.

That does it for the graphics and performance departments. Now, let’s talk controls. Anthem lets you use the usual mouse and keyboard setup, or a gamepad. I started out with mouse and keyboard controls like any self-respecting PC player, of course.

You’re free to change your keybindings. You can also tweak your mouse sensitivity when aiming, flying, or swimming. 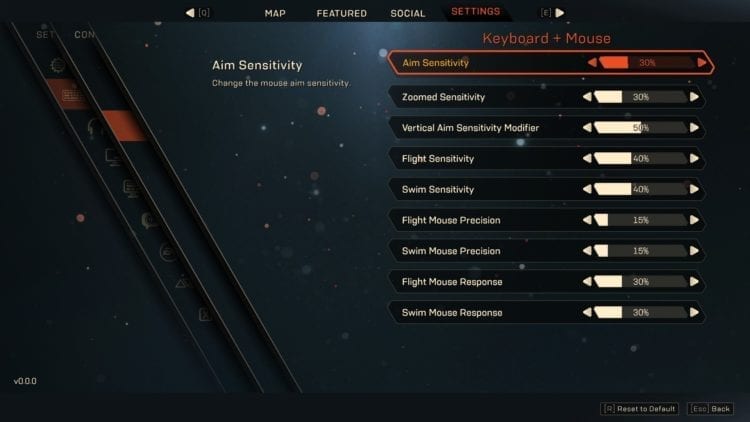 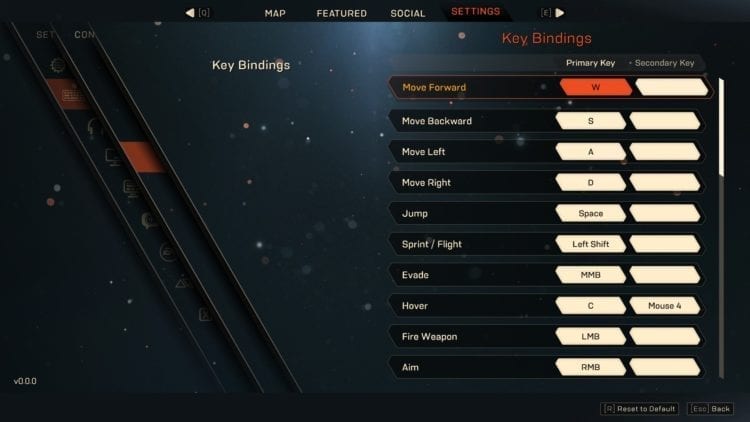 One key that’s noticeably absent is a screenshot bind. Even Apex Legends already had one. I had to make do with running the game via Steam preferring that system over the Nvidia GeForce screenshot/overlay.

Anyway, I played the first couple of missions using a mouse and keyboard until I realized something was off. No matter how much I tweaked my mouse settings, I just didn’t feel comfortable. I found myself crashing into rock formations and walls more often when using the mouse to control my flight direction.

I eventually had to switch to a gamepad. I have a wired Xbox 360 controller and a wireless Dragon War (the latter’s an Asian brand). Both were working properly. 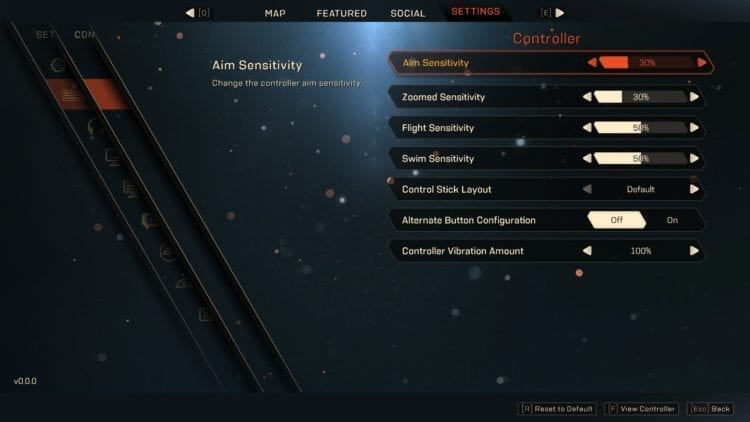 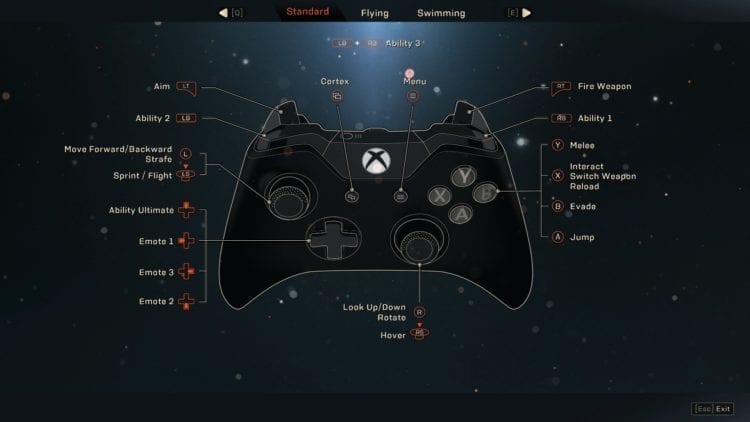 Flight controls were actually smooth and responsive, at least compared to when I was using a mouse. Combat controls were also intuitive and didn’t bother me one bit. There’s no PvP at the moment which means I don’t need to rely on “twitch-shooting” that only zero input delay mechanical keyboards and mice can provide. I know how heretical that sounds when playing a PC game, but hey! Do note that this is simply based on my preference so if you’re a KB/M person, more power to you.

Anthem has a number of options that you can tweak to get a pitch-perfect experience. You can choose to lower different types of in-game sounds from voice-over, SFX, even bullet impact volume. You can also choose from a number of speaker presets and configurations. As for voice chat, you can enable or disable it, set the threshold, and even choose from push-to-talk or voice activation. 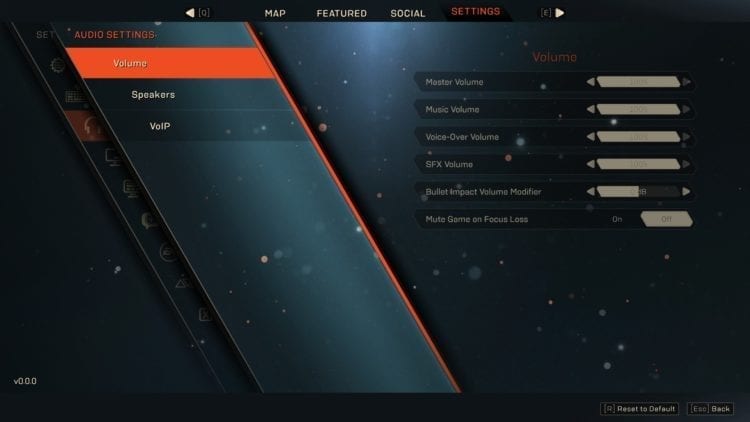 Noticeably absent in Anthem is regular text chat. No chat boxes in the game at all and what you’re left with are canned messages. Your best bet is to use your mic to chat with random players or hop on a Discord channel to meet new friends.

The absence of a social feature might discourage newcomers who are used to MMORPGs, but there’s a valid reason for that. One of the FCC’s regulations in previous years dealt with providing ease-of-access for persons with disabilities. The 21st Century Communications and Video Accessibility Act (CVAA) meant that video games should offer text-to-speech capabilities when social features such as in-game text chat are present. Though companies had appealed for extensions, the last one was granted at the end of last year. Since then, new games have to be CVAA-compliant.

Speaking of accessibility features, Anthem has a color-blind filter. You can also increase the size of the mouse cursor or subtitles. 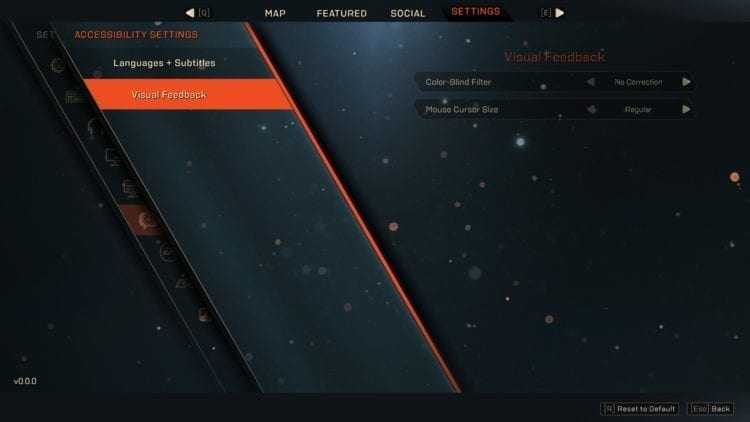 Anthem’s general gameplay options let you toggle head-bobbing and weapon holstering and that’s it. Do you know what would affect your playthrough more? The interface — and Anthem has a plethora of options you can change.

These options include the HUD’s overall visibility, along with separate facets you can toggle on or off — from the breath indicator to HUD warnings, overheating, compass, and more. 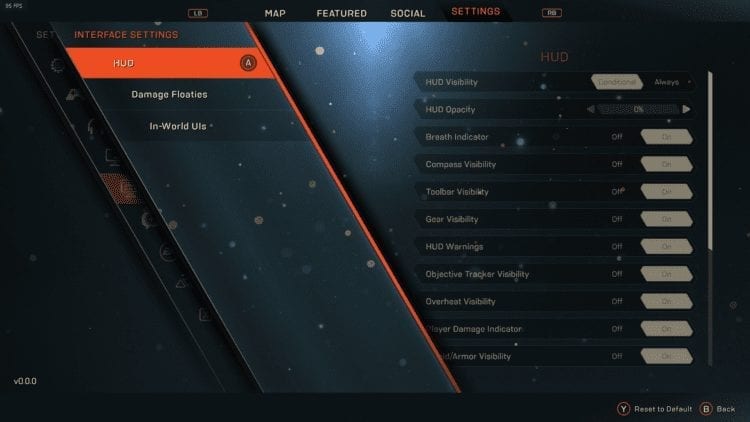 Additionally, you’ll be able to switch off the enemy, NPC, and object health bar visibilities. Likewise, you’ll be glad to know that you can toggle “floaties” or floating numbers that indicate damage on or off.

Anthem is a beautiful game and there’s no doubt about that, but the HUD can be a mess at times due to all the clutter. Change the options to what suits you best. Sometimes, less is more. 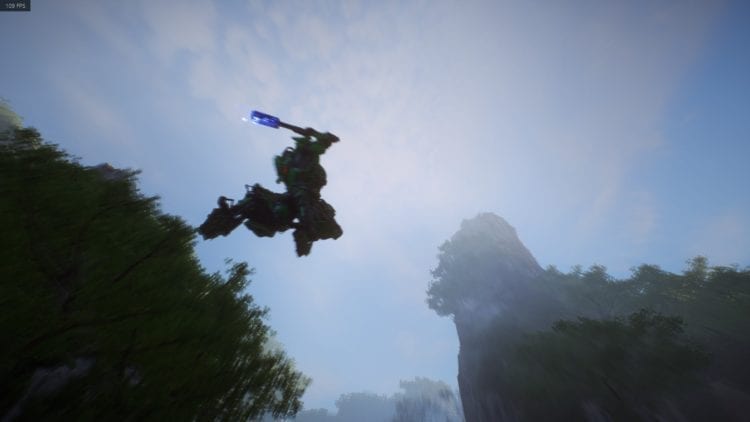 Because this moment looks horrible with all the player names, icons, and buttons around. That FPS counter is fine, though.

Finally, we’ve got the all-important factor that determines whether you’ll potentially like a game, or if you’ll be frustrated to no end — connection and server stability. We know that Anthem’s VIP demo was plagued with connection issues. However, with the game’s early access for Origin Premier members, I can say that connection is stable (for the most part).

After playing for several hours, I’ve only gotten disconnected once. That was at the end of a Stronghold activity. What’s notable, though, is that the game didn’t try to reconnect me to the same instance. It just booted me out and that’s it. I couldn’t tell if that was due to server issues or because I just randomly joined one even though it wasn’t unlocked at the time.

What’s more telling are the load times before you can start activities. Anthem’s story requires you to run back and forth the Tower, I mean, Fort Tarsis, just so you can go on new missions. Each time you do so, you’ll have a loading screen of your Javelin “powering up,” followed by another loading screen as you spawn in the activity. Yikes!

It can take you out of the moment, but that’s neither here nor there as this is a technical review. I’ll talk about it more in our official review of the game. 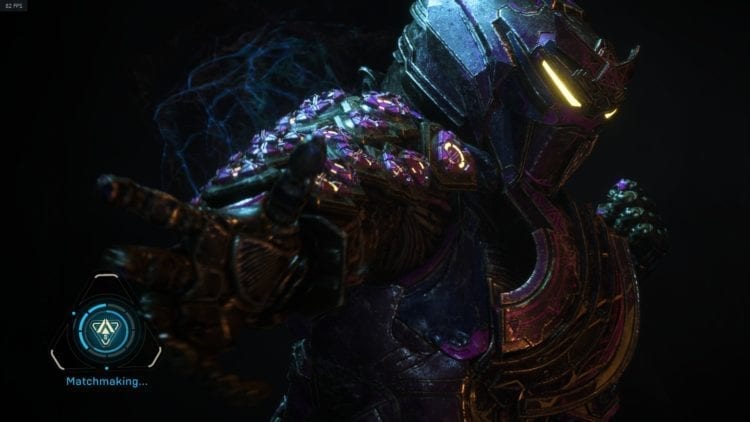 Seeing my Power Ranger do this for the twelfth time wasn’t as interesting as before.

Anthem’s visuals are breathtaking to behold, but at times also demanding. As mentioned earlier, you can run it with a GTX 1070 Ti on Ultra settings, getting 60-75 FPS with slight dips. You’ll get the most out of high-end (and more expensive) hardware. Fortunately, the game doesn’t look half bad even on lower settings. I was playing with a mouse and keyboard at first but found it more comfortable to switch to a gamepad (especially when flying). Mouse and keyboard controls are still responsive and tight, and you should be able to tweak them to your ideal settings.

Will there be more changes in store or even additional optimization? That’s a possibility given that Anthem will get a full release on February 22. Be sure to check out our official review later in the week.

Oh, and before I forget, data collection is enabled by default in the account settings tab. You can disable that if you don’t want your usage data to be collected. 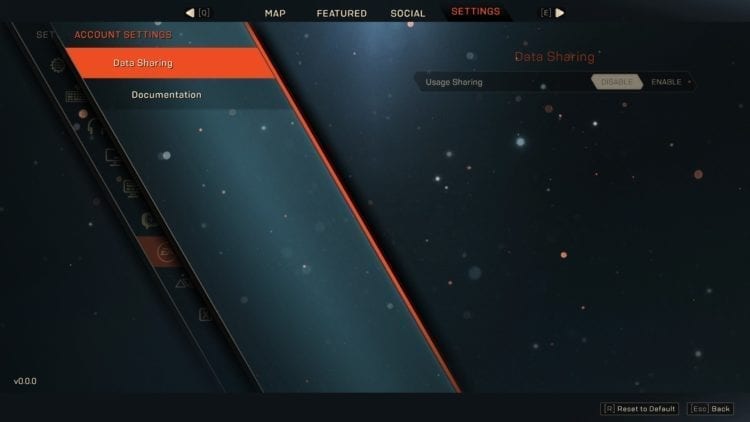 You know you want to.

Path Of Exile: Synthesis Announced, Here’s Everything You Need To Know