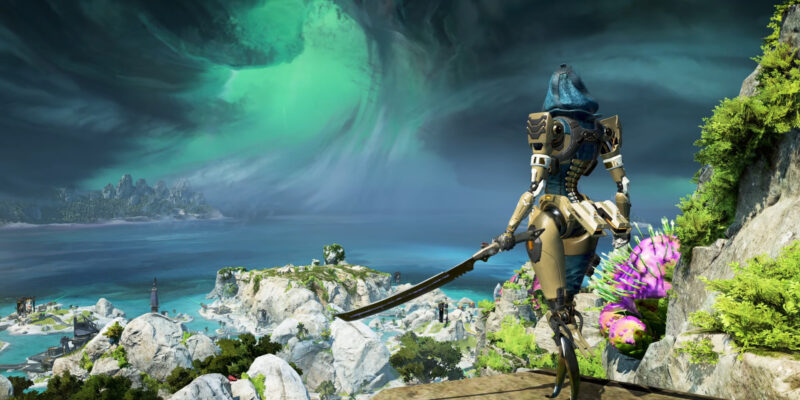 The latest Apex Legends: Escape trailer just dropped and it gives us a first proper look at Storm Point, the new map coming to the battle royale with Escape. The trailer also reveals more information about the new SMG, gives us a clear idea of Ash’s abilities, and shows off a collection of new skins.

There’s not much more to say about Ash other than confirming her abilities. The knife that tethers enemies is her Tactical Ability, and her Ultimate is the slice in reality she cuts with her sword. This looks like it functions very similarly to Wraith’s portal. Her abilities are what we expected from the previous trailer. The only question is, what’s the deal with the Data Knife? If you missed her origin story, you can check it out here.

Escape to the island

As suspected, the setting for the Escape launch trailer wasn’t a random island. It’s the new map called Storm Point. The map comes with some unique mechanics, which should do a lot to keep the gameplay feeling fresh.

The creatures we saw hunting the Legends in the previous trailer are running around the island, so watch out for them. You can choose to engage these Wildlife Nests for the chance at some extra loot. Killing Prowlers and Spiders rewards you with attachments, ammo, and consumables. Clearing a Nest will reward your entire team with Crafting Materials. Plus, a small portion of the damage you do will go into your EVO Shield. Wildlife Nests are always found in the same locations, and only the number of enemies will vary slightly.

There are launch tubes called Gravity Cannons that will send you soaring through the skies like a super-charged Octane jump pad, replacing the jump towers found on the other Apex Legends maps. Storm Point also includes a bunch of unique named locations. You can check them out in more detail on the game’s website.

Respawn Entertainment mentioned the new C.A.R. SMG was flexible. Now, we understand what that means. In the latest Escape trailer, we can see that it can use both light and heavy ammo. It also has two firing modes. It’ll be interesting to see how the new weapon functions with the different ammo types.

Apex Legends: Escape begins on November 2. Along with the new season, there will be a new battle pass. You can see some of the skins in action in the trailer above.