Apex Legends is three weeks into Season 4 and just coming off the Valentine’s Day Rendevous event that ended last week. Now, the next limited-time event for Season 4 has been announced. The System Override Collection Event will run from March 3 – March 17 and adds a new game mode called Deja Loot with Evo Shield, 24 limited premium cosmetics, two Legendary weapon skins, and an Heirloom set for Octane. 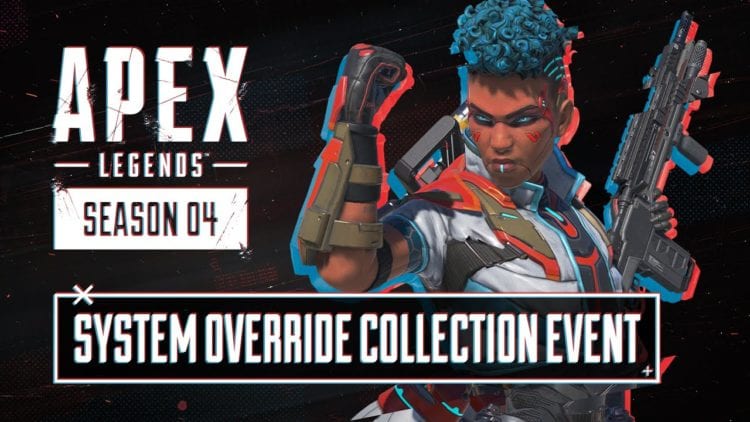 Deja Loot is a very unique take on traditional Apex Legends and battle royale games in general. Deja Loot is a limited-time mode that has set loot throughout the map. So if you find an R-99 in a crate at Survey Camp, it will be there every time. Removing randomness from a battle royale is bound to bring fascinating results. This could be a test of sorts for battle royale esports moving forward since that is one of the biggest complaints surrounding the genre. Deja Loot will be played on World’s Edge for the first week and then move to King’s Canyon on the second.

Another unique addition with Deja Loot is the addition of the Evo Shield. The Evo Shield is a body armor that grants the wearer more armor based on damage inflicted to non-downed opponents. The Evo Shield starts off worse than a Common (white) body armor but can grow to be heartier than an Epic (purple) body armor. The Evo Shield does change colors as it grows, and those colors can be seen by opponents so they know what juggernaut they are about to run into. For now, the Evo Shield will be exclusive to the Deja Loot mode, but EA and Respawn Entertainment said they would “consider” adding it to all matches based on feedback.

Our favorite adrenaline junkie, Octane, has gotten his very own Heirloom set in the Apex Legends System Override Collection Event. His Heirloom set shows him styling with a butterfly knife that doubles as a syringe full of his favorite tonic. A banner pose and intro quip will also accompany his new knife, but those haven’t been shown off yet. You can obtain Octane’s Heirloom set for “free” if you obtain all 24 of the unique skins added as a part of the System Override Collection Event.

The addition of Octane’s Heirloom set also saw a new system implemented regarding how Heirlooms are obtained. Now, instead of receiving a random Heirloom set when you’re lucky enough to open one, you will receive Heirloom shards. You can use these Heirloom shards to redeem an Heirloom set of your choice, rather than getting one for a character you don’t care about.