Hold on to your tri-cornered hats, people; Assassin’s Creed: Rogue actually has a great PC version. There aren’t any fancy Nvidia-sponsored options to toggle, but it does run (mostly) smooth and manages to hold 60fps on my rapidly aging PC a good 90 percent of the time.

Since I have an AMD graphics card, those two factors could well be connected. 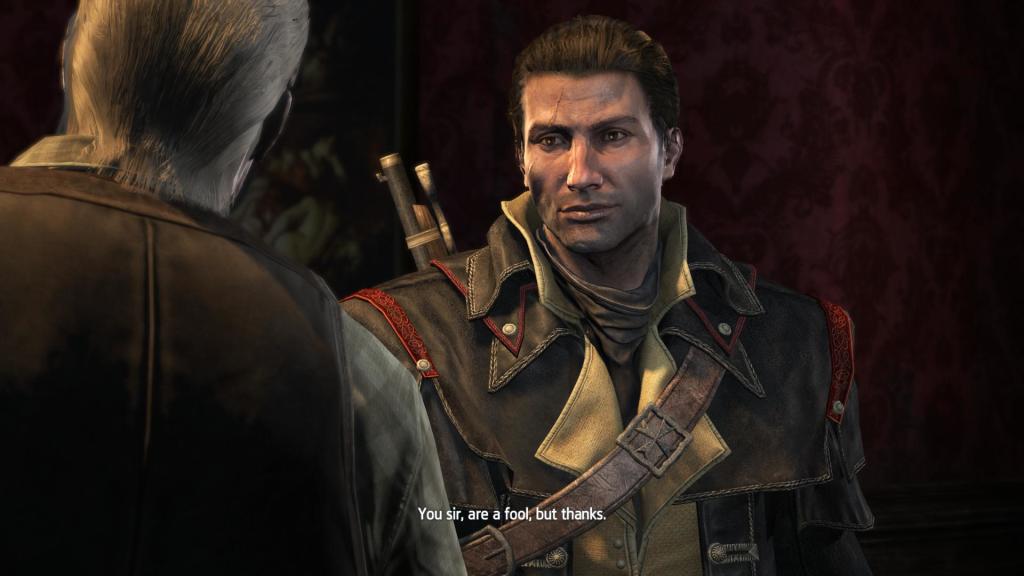 Those specs have definitely forced image quality compromises with more recent titles like Dying Light, but I’m pleasantly surprised at how well it’s all holding up in 2015 (especially since it means I can put off upgrading a little longer.)

Anyway, as you’d hope and expect, that set-up is quite capable of coping with this late-era 360/PS3 port.

Let’s have a look at some scintillating Assassin’s Creed: Rogue graphics options, shall we? (Click for a larger version.) 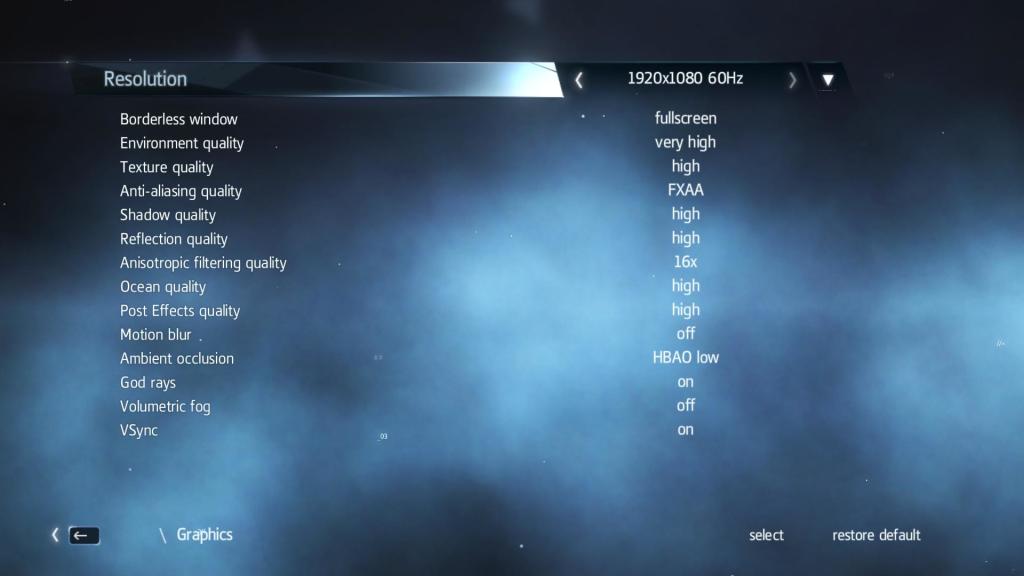 High and Very High in an Assassin’s Creed port? HOLD ME.

As mentioned, there are no special Nvidia things. Still quite a few options to go at, though. You can run Assassin’s Creed: Rogue in borderless windowed mode if you fancy taking advantage of the native triple-buffering afforded by Windows, but for once you may not have to.

Assassin’s Creed: Black Flag’s vsync option was the irritating kind that would cap the frame-rate to 30 if it fell below 60, so you had to either employ some external adaptive method (through your GPU software) or put up with rubbish screen tearing. Rogue’s vsync, happily, doesn’t do this. It manages to keep the screen tearing away without doing bizarre things to your FPS.

It’s probably worth noting that FXAA is the only offered anti-aliasing option, though. Which means some will probably want to force some higher quality AA through external software. Most of the rest of the options are self-explanatory and go up to either High or Very High. Ambient occlusion tops out at HBAO High.

Those settings in the image above are what I settled on to get 60fps most of the time. In busier town areas, or when Rogue is loading some stuff in cut-scenes it’ll temporarily drop into low-50s territory. I did a two minute FRAPS benchmark in New York (roughly equivalent in density to somewhere like Havana in Black Flag) and got 59-60 with a couple of 52-55s. This game is basically a bizarre reverse-Unity situation where I find I can keep turning options up with barely any hit to the frame-rate. 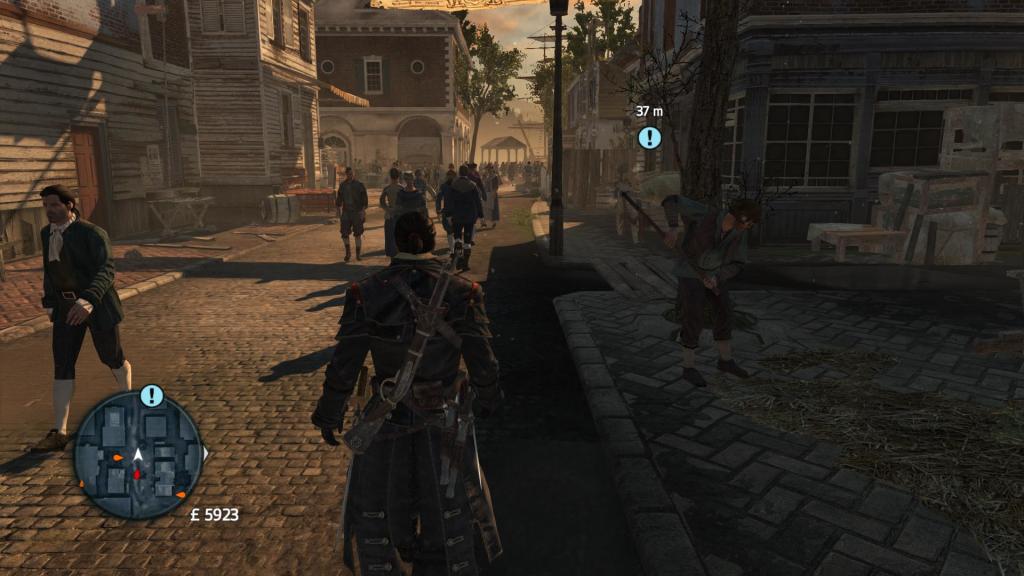 No Unity style mega-crowds, but New York is no slouch in the pedestrian department.

I could probably tweak things further to keep it at 60 even more often, but I’ve been pretty happy with the overall performance. The only time I’ve seen anything below 50 was when sailing past a sea battle between five or six other sizeable vessels – there, it tanked to about 35 for a bit.

I’m not absolutely sure why, because I’ve been involved in other naval fights with a similar number of ships and Rogue seemed quite content to sit at 60. Aside from that and a couple of fairly obvious “game is loading something right now” moments across about three hours of play, all has been pleasantly stable.

You can see how the game looks in the images dotted around this piece (taken through uPlay, so a bit compressed I’m afraid.) The closest visual comparison is obviously Assassin’s Creed IV: Black Flag on PC, as Rogue uses the same engine and many of the same mechanics. It also has a similar mixture of low-to-medium density towns, island coves and open ocean across (so far) two maps. One in the wintery North Atlantic, the other a greener River Valley.

There’s a bit of the usual AC ‘animus’ pop-in (though not the ridiculous amount present in Unity) and the draw distance isn’t so hot from certain viewpoints – even if you have the environment set to Very High. I don’t recall if this was the case in Black Flag, so the apparent performance gains over that title may be from a slightly less taxing LOD. 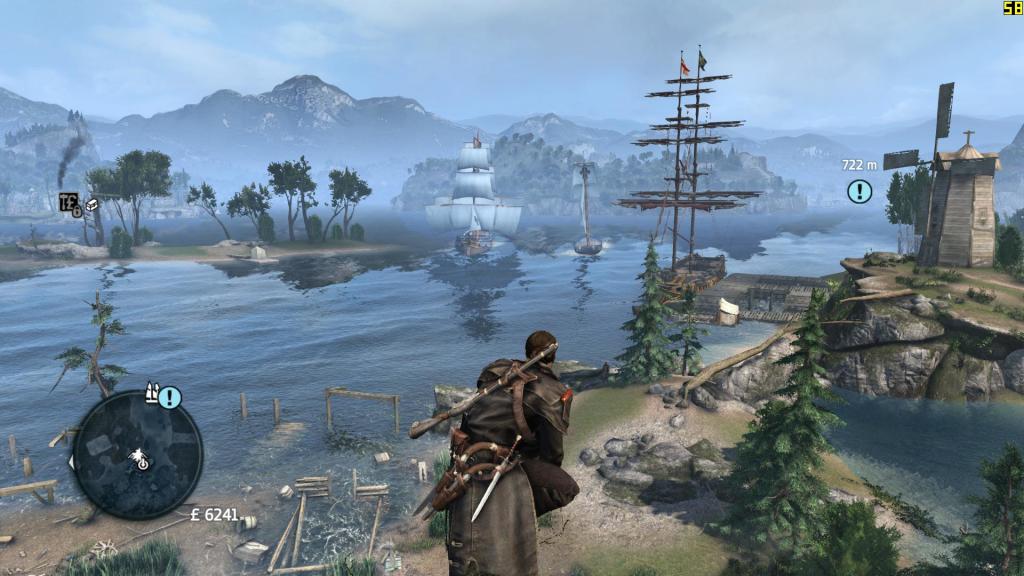 The draw distance stuff isn’t TERRIBLE, but it’s pretty obvious in spots like this.

If you’re one of the few daring or foolhardy types who still tries to play Assassin’s Creed with a mouse and keyboard (I tried once … never again,) you should find Rogue to be pretty much the same as the rest in that regard. The key set-up can be fully redefined, which is always welcome.

I’ll be writing a full, proper review once I’ve actually finished the game, but so far Assassin’s Creed: Rogue is living up to its billing as Black Flag 2. Main man Shay Cormac isn’t quite as interesting or funny as Edward Kenway yet, but I’ve just hit the part where he’s grown up a bit so that might help. Ubisoft took the rather odd decision to hire a Canadian to do a wobbly Irish accent, which is also a bit more distracting than Kenway’s authentic Welsh vowels.

But if you want to sign on for more ship boarding, shanties (yep, more of those) and a game that remembers to give you the rope dart weapon before the final chapter this time, Rogue looks like it’s there for you. After about three hours I’ve already chased down precursor manuscripts, got involved in Abstergo office politics, accidentally caused an earthquake and played about five different collectible-based mini-games involving lining a thing up with another thing. So, yes, it’s an Assassin’s Creed game. 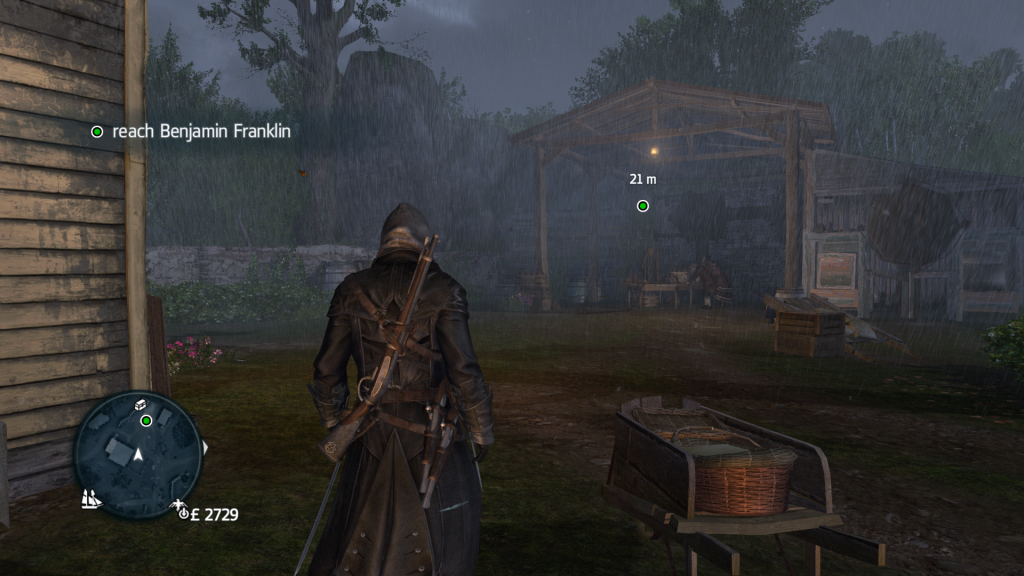 Keep in mind that I’m just a sample size of one, so this isn’t the universal word on Assassin’s Creed: Rogue’s performance. I’m surprised and pleased with how well it’s running though.

Of course it should be a given that a 360/PS3 title transferred to PC in 2015 runs well, no matter how many higher-resolution textures and AO options have been included. But Assassin’s Creed 3 was a similar situation and that was reportedly quite poor (I didn’t play that one, so I couldn’t say for sure.) Black Flag improved after patches, but certainly wasn’t ideal at launch. Unity was … Unity.

Perhaps Assassin’s Creed: Rogue has benefited from the extra months of development, or perhaps Ubisoft Kiev (who once again handled port duties here) are now masters of the older Anvil engine. Whether it’s down to improved optimisation, Rogue perhaps being slightly less demanding in some areas than Black Flag, or the lack of Nvidia tie-ins giving AMD a smoother ride for once, I’m not sure. I’m sailing around at 55-60fps with the options pushed up quite high, so if your PC is similar or better than mine, chances are you will too.

Loom’s “tangled” legal rights may prevent a sequel or remaster