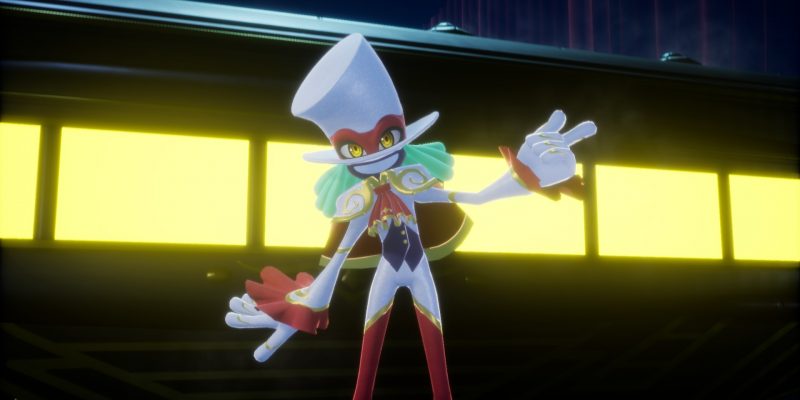 Hype can be a cruel mistress. It supplies copious winds to set properties aloft. But it can burn their wings off with an intense magnifying glass as well. Yuji Naka hadn’t directed a game since 1999’s Chu Chu Rocket, let alone a tentpole 3D platformer. He was told by the higher-ups at Square Enix that, while he could execute his vision with Balan Wonderworld, this was his one chance. It’s unfortunate, then, that this is the game he chose to make. To be clear, what’s here is far from bad. There are numerous things to like and I did find myself enthused on occasion. But this is a dated game built out of questionable design choices that make me wonder why no one stepped in with advice before it was too late.

Balan Wonderworld begins with players choosing from one of two characters, both of whom are struggling with circumstances they find unfavorable. I say “find,” because they’re more minor inconveniences than anything. Leo is disenchanted due to a lost friendship, and Emma is saddened because her maids keep ignoring her and whispering to each other while she’s present. Super relatable shit there, Yuji.  While running from their troubles, they find themselves in Balan’s theater, a magical place or something.

Balan is a guy with green hair, a hat, and a creepy smile. He invites Leo and Emma into a colorful hub connected to a dozen woeful individuals who need their help. Why Balan, a guy with Dragon Ball powers, needs two children to do this in his stead, I don’t have the foggiest. But the duo presses forward to assist a dozen individuals who share sadness in their lives. Down-on-their-luck types, such as a clown that’s scared to ask a girl out, or a guy that lost a chess match one time. You’re breaking my heart, fellas. 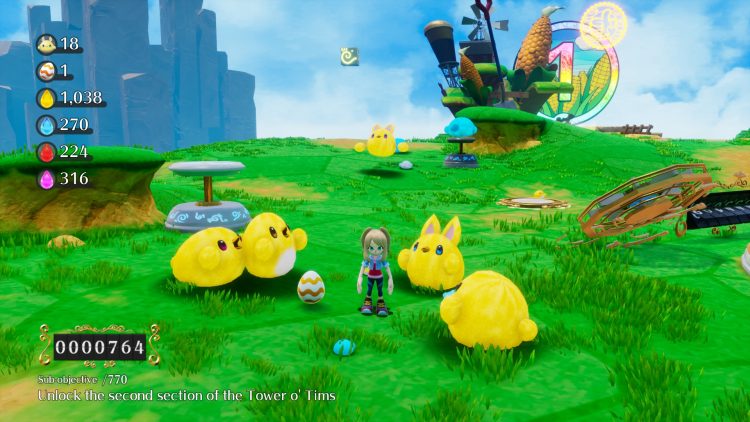 There’s not really any dialogue in Balan Wonderworld, as most things are conveyed through songs. Each of the 12 characters you’ll help has a trio of cutscenes, all including a cringey, choreographed musical number. I barely know what the plot of this game is. Balan has a dark doppelganger named Lance (the most fearsome of names) who keeps corrupting people and turning them into shadow monsters or something. I don’t know why. I suppose it doesn’t matter.

Balan Wonderworld has a structure that’s basically a combination of every post-Mario 64 3D platformer and the Sonic games. There are 12 chapters, each divided into two acts and a boss fight. Just like Sonic 2! Each chapter has golden Balan statues to locate. Once players have accrued the required number, more chapters open up. After both sufficient numbers of statues have been collected and every chapter boss has been cleared, the final boss fight opens up. It’s straightforward, but I don’t mind that one bit.

Each of these chapters is accessed through Balan Wonderworld‘s hub area. There’s not much of note to see here, save for the fact that it operates akin to the Chao Garden from Sonic Adventure. You’ll feed these cutesy bird animals called Tims some gems that you’ve found for the purposes of building a tower. Finding eggs in the levels and feeding Tims will result in more Tims. I don’t know what the benefit of doing any of this is, as I didn’t finish building the tower, nor does there seem to be much incentive to. 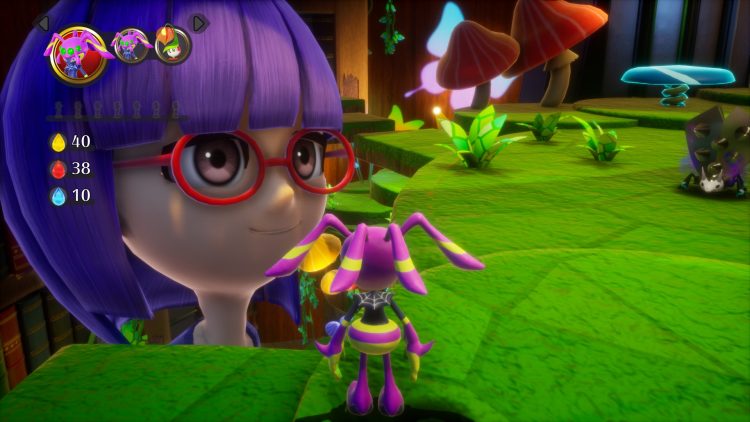 Balan statues are typically acquired simply by finding and touching them in the levels. But a significant amount of them require the finding of Balan hats, which lead to miserable, boring quick-time events called Balan Bouts. These all feel interchangeable. Aside from a single instance of button-mashing in each, every section simply tasks players with pressing any button as Balan’s silhouette matches up with his body. Many of these events take multiple minutes, most of which are spent watching the same animations you’ve seen ad nauseum.

The kicker is this: to get the statue from these, you have to get a grade of Excellent on each section. Unfortunately, if you’re even a tiny bit off, you’re awarded with Great. By the end of the game, these have six sections. And the hat disappears, requiring the entire level to be restarted. At first, you’ll find maybe one of these per level. By later levels, you’ll often find three. This is one of the main reasons I’m not going to even attempt to collect all the statues. I loathe these and can’t possibly comprehend why a game that’s usually so breezy and overly lenient demands the level of perfection these require. There are also way too many of them.

Dressed for the part

Leo and Emma can’t do a damn thing as they normally are, so they rely on costumes found in the levels. There are 80 of these. Some of them are literally interchangeable. Others have so little usefulness that it’s a wonder anyone even bothered. The gameplay in Balan Wonderworld is intentionally simple, requiring only one button press. Furthermore, each costume can only be manipulated with a single button. This means that many costumes that allow Leo and Emma to attack cannot jump. Great. 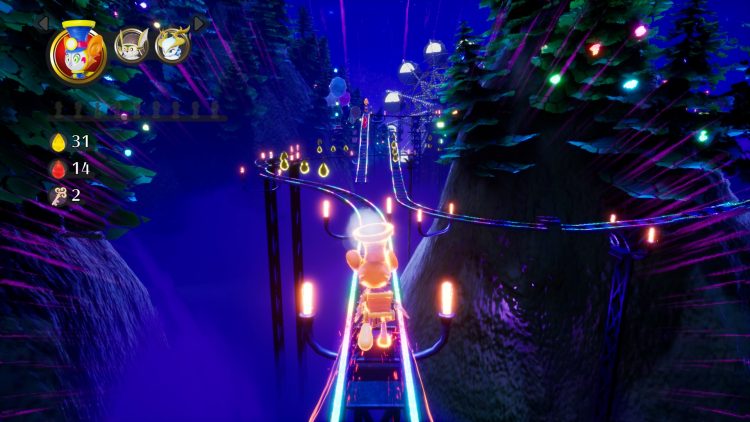 Some of the combat costumes let loose their attacks at set intervals, because it was necessary for them to jump to navigate areas. We really needed to adhere to this one-button design, huh? Navigation is dead simple and areas are basic and often overly narrow. The levels are also often boring. They take place in a variety of locations, such as a farm, a lava area, an ice area, and a carnival. Enemies pop in occasionally and tend to die in one hit, save for minibosses that guard doors. Combat involves jumping on them or hitting them with a ranged or melee attack.

There are bosses too, most of which are insultingly easy, save for some badly designed later ones. These are interesting, because each has three ways you can harm them, which grants a single statue for each one that’s utilized. Bosses all take three hits before dying, and fighting them tends to last a couple of minutes. Their lairs even have respawning costumes that correspond with their weaknesses. Leo and Emma, much like the regular enemies, can typically only take a single hit. But the game design once again clashes with “the game must be easy for the children” philosophy. Namely, because players will completely lose a costume if they’re hit while wearing it.

That may not sound like a huge deal out of context, but it’s a pain in the ass within it. Many costumes can only be found at a single point. Players can store extras in their wardrobe, but that requires them to farm them. To get a costume, Leo and Emma must find a key and then use it on a crystal. About a minute after either is grabbed, it will respawn. They can hold three costumes on their person and a ton can be stored in the wardrobe. Some costumes, such as the infinitely useful Frost Fairy, have much better mobility than others. It only makes sense to stock up on the good ones and ignore the dozens of crappy alternatives. It’s also worth mentioning that Frost Fairy makes the tasks of getting statues a cakewalk. The design in subsequent levels seems to forget that you can use it, as you can continue exploiting it for the rest of the game. 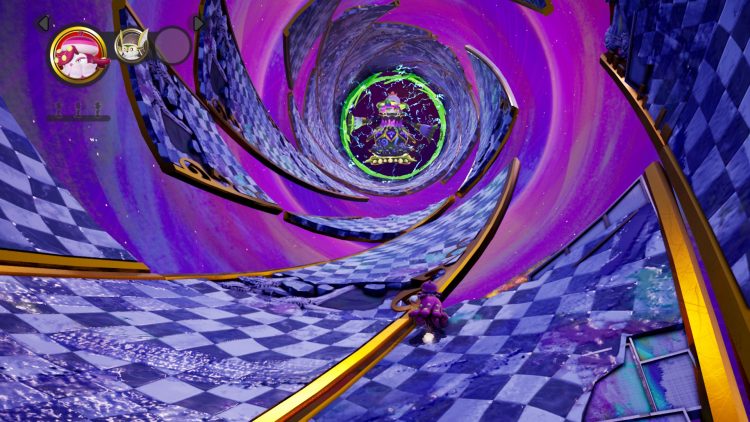 Once all 12 main bosses are beaten and sufficient statues are collected, it’s onto the last boss. Once again, the design philosophy is thrown out the window for a final fight that’s even worse than what preceded it. It’s a multi-phase affair that can take a while to get through. To add insult to injury, a specific costume is required to perform the coup-de-grace. If you manage to get hit a single time while wearing it during this fight, you won’t be able to win. Once the timer expires, you’ll be kicked back to the hub and will have to start over again from the beginning.

After you see the underwhelming conclusion, a dozen bonus levels open up with six new statues each. All of these are rehashes of prior levels, however. I might have gone out of my way to collect every last thing, but I started ignoring the Balan Bouts partway through. Thankfully, you don’t even need to do them, as the threshold for progress doesn’t demand that players grab a majority of statues. Balan Wonderworld took me about 13 or so hours to beat — 100% completion will take a lot longer.

Balan Wonderworld could have been a lot better than it is. It’s not bad, but its design philosophy was not only misguided, but repeatedly compromised by some truly bizarre design decisions. These should have been rectified. What we’re left with is an average 3D platformer that’s highly reminiscent of the Nights sequel that released on the Wii in 2007. People who just want to explore colorful levels and collect things can have a nice time with it, but this is a decidedly average game that easily could have been better.

Did Yuji Naka deliver on the hype, or is this a 3D platformer best avoided?
6

Painfully average in most respects, Balan Wonderworld won't draw much admiration for its contents. Still, it's a competent game that does have its charms, few as they may be.