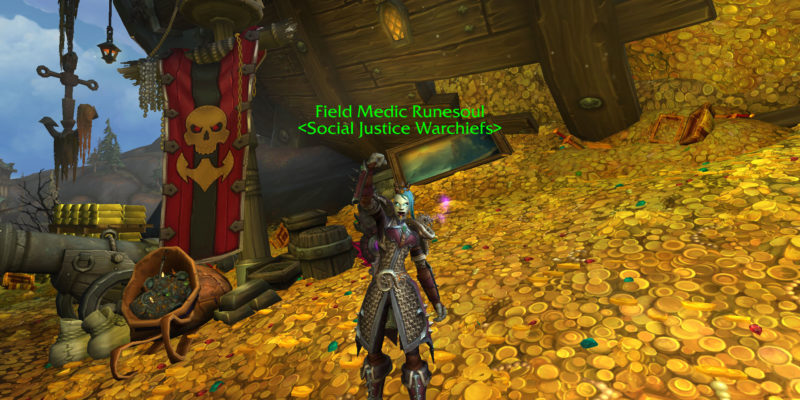 I’ve spent most of Battle for Azeroth focused on one main goal and one main goal only: getting my long boi, the Mighty Caravan Brutosaur mount. When it was announced in November that the vendor selling this 5 million gold mount would be removed in Shadowlands, I still had 2 million to go. Luckily, I also had discovered by then the best possible way to make lots of gold quickly — farming for spare parts.

Here’s the catch: this method is holding up, but it’s likely to become completely obsolete by the beginning of Shadowlands. For that reason, I’ve also created a guide on the other gold-making methods I’ve been using. They’re slower, but they should also continue to be reliable for the foreseeable future. That said, this is still the best way that I’ve found to make gold at the moment. 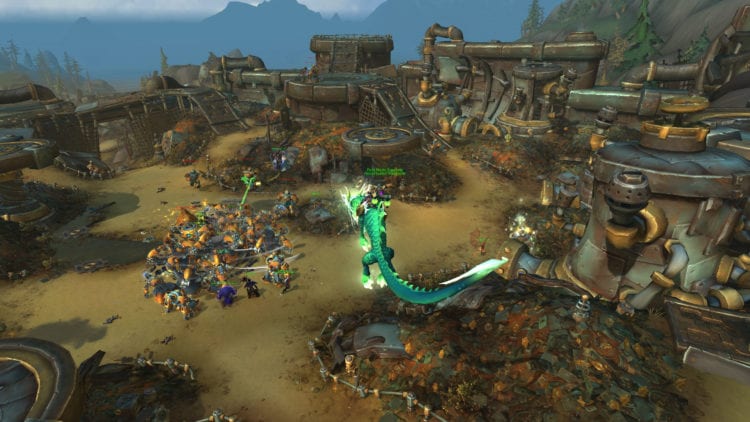 Spare parts are a soulbound material that can be found in Mechagon, one of the two new zones that were introduced in patch 8.2. They drop from almost any mob, and are used in Mechagon crafting. Most importantly, they’re used to make S.P.A.R.E. crates, which in turn can be used to make Famine Evaluator and Snack Tables.

These tables provide some of the best food buffs in the game, so they’re always in demand by raiders, especially on hot raiding nights like Wednesdays and Sundays. They also sell for a lot of gold.

Needless to say, you’ll need Zandalari cooking to be able to make the tables, and you’ll need the rank 3 recipe to really maximize your profits. You can still make gold without cooking, because you’ll be farming and selling other items as well — but probably only half as much.

To learn the rank 1 recipe, you need a level of 160 in Zandalari cooking. visit Rolm (Horde) or Instructor Ulooaka (Alliance) in Nazjatar, or Stacks in Mechagon. For rank 2, your cooking will need to be at 175 and you will need to be exalted with the Rustbolt Resistance. You can buy the recipe from the Stolen Royal Vendorbot in Mechagon. The rank 3 recipe can drop in the Operation: Mechagon dungeon. It can also drop from the Rustbolt Resistance paragon box – which is how I got mine.

If you don’t have Zandalari cooking leveled high enough, or aren’t exalted with the Rustbolt Resistance, this might seem daunting and even pointless. I still recommend putting the time and effort in to get both, as this farming method at full efficiency is just so profitable.

One other item that might be worth looking out for is the Metal Detector (blue punchcard) that goes into your Pocket-Sized Computation Device. This punchcard drops from various Mechagon mobs, and will increase the number of spare parts you find by about 10%. I picked up mine while farming spare parts, but I wouldn’t suggest you go out of your way to hunt one down. 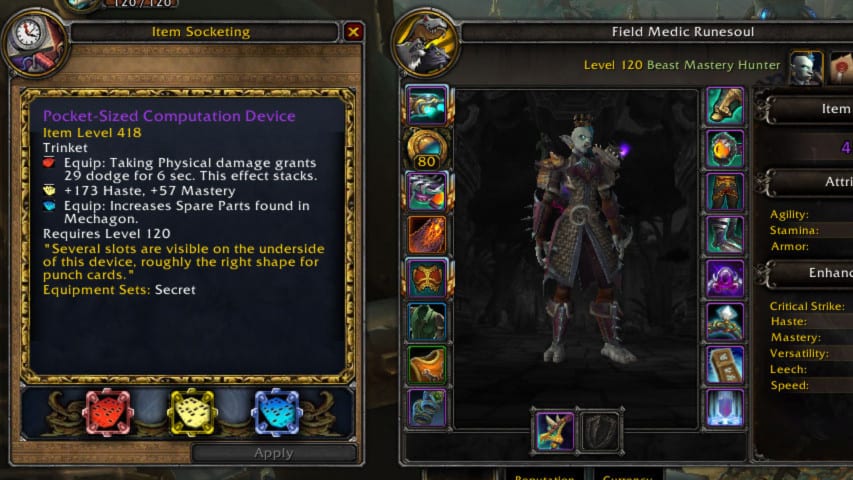 But enough preparation, it’s time for telling you what to do:

1) Head to Mechagon — You’ll want to pick a time when a lot of people are playing, as this is a group farm. So, evenings or weekends are best.

2) Head to Junkwatt Depot — The area should be filled with elite mobs. If it’s raining, they’ll be rusted and not elite. Your goal is to kill and loot as many of these mobs as possible. 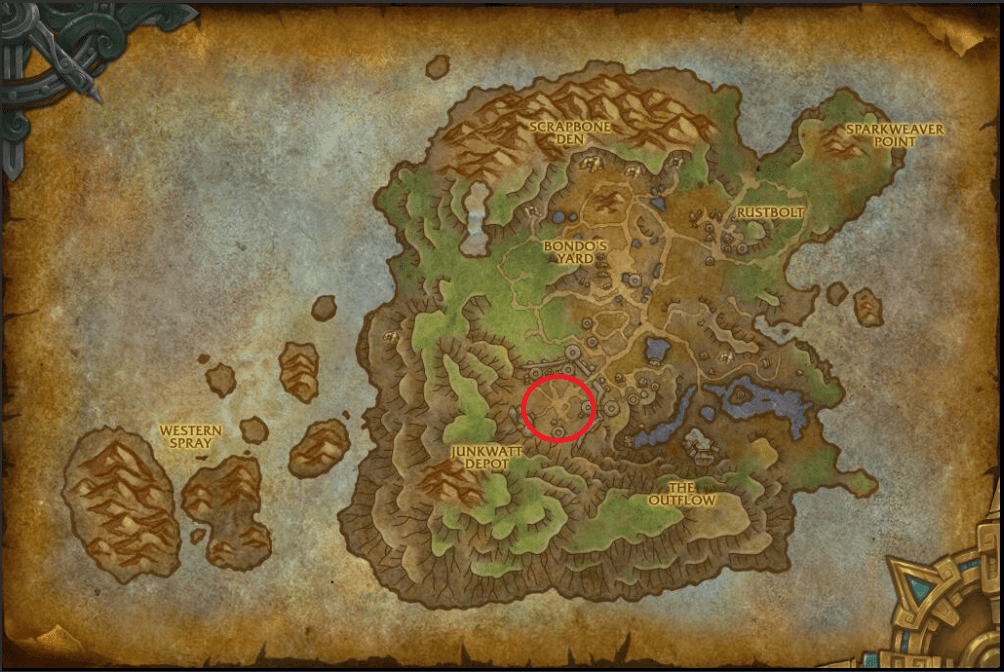 3) Join or start a spare part farming group, preferably a 2×4.

A 2×4 is a set of two groups with four members each. Whatever these groups kill, as long as one person from each group has tagged it, all eight members will be able to loot. Keeping the numbers in an exact 2×4 is very important. If one group has five members, the other group will not be able to loot. For more information on how 2×4 groups work, including how to successfully start and run your own without the help of another person in your realm, read my guide.

To find the right group, just go to the premade groups in your group finder, select custom, and search for “spare farm.” You might also want to add the keywords “wm on” or “wm off” depending on the war mode you play in, and “2×4 or even just “2” to find the 2×4 groups. 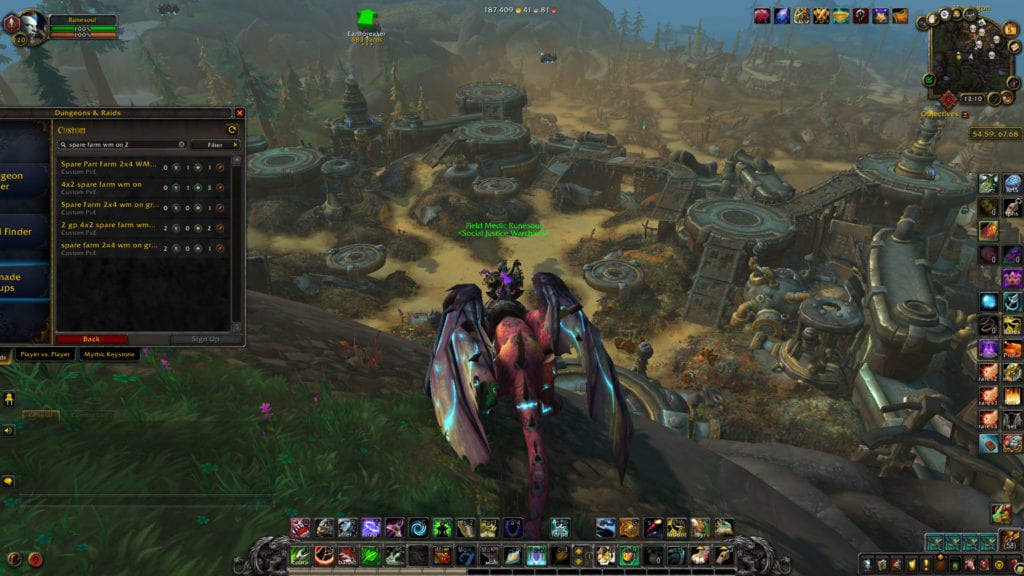 You’ll want to gather as many mobs as possible, pull them to the middle of Junkwatt Depot, kill them, loot, rinse and repeat. Your more mobile group members should focus on pulling (this is always my job as a hunter), leaving the killing to the less mobile and the tanks.

You’ll be picking up spare parts. You’ll also be picking up hardened springs, tempered plating, and machined gear assemblies. These can be used together to make bundles of recyclable parts, which can be turned in once a day for a reputation reward, and an infinite amount of times for recycling requisitions, which contain, among other things, more spare parts. I suggest you do not do this.

Instead, pop the springs, plating, and gears on the auction house. They sell, and they sell for a lot. Here’s my sale data on selling hardened springs alone:

I think the technical term for that is a “buttload of gold.” You’ll also pick up plenty of junk, as well as green items — do what you want with those. Scrapping or disenchanting the items might be particularly profitable for crafters. I usually just sell them.

While you’re farming, you might come across an exothermic evaporator coil. Those can be inserted into the weather alteration machine, which will cause it to rain, and force all the elite mobs to rust, rendering them non-elite. This makes the mobs easier to kill. It also causes an extra boss, the Oxidized Leachbeast, to spawn. Sounds like a good idea, right?

It’s not. Do not summon rain, especially if you have a proper 2×4 going and can kill the elite mobs without much hassle. 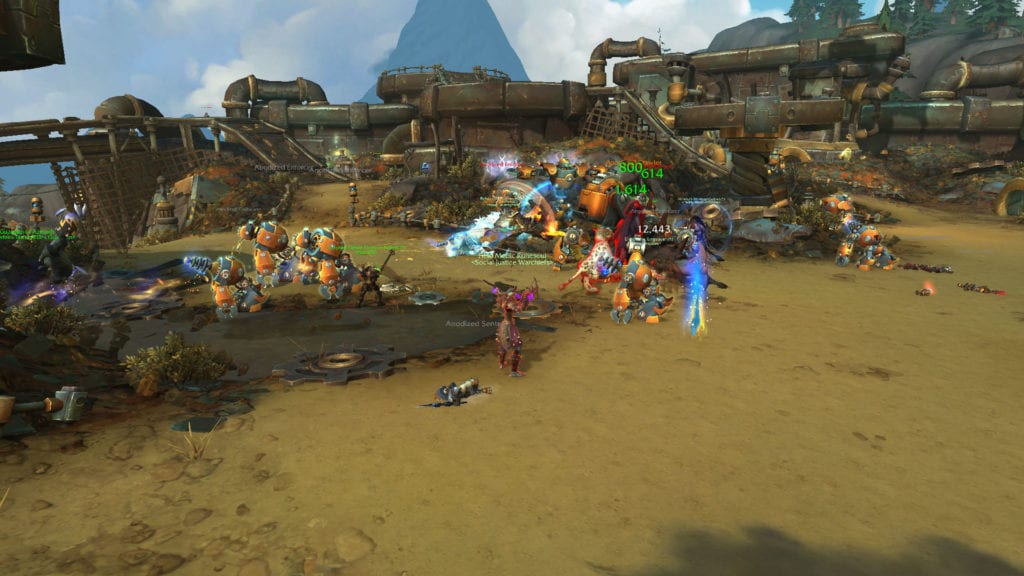 I never loot as many parts, plating, gears or springs when it’s raining, and I have a few theories on why. Rain causes oxidized leachates to spawn, which are useless, as they do not drop anything worthwhile. These leachates might also be getting in the way of the more useful mobs spawning. Even the Oxidized Leachbeast is more of a curse than anything else. During any proper farm, bosses respawn constantly, and since you only get worthwhile loot on the first boss kill a day, adding yet another boss to repeatedly kill just wastes time and slows you down.

First, you’ll want to turn your spare parts into crates. Pascal-K1N6 will help you with that. Next, you’ll need the other ingredients required to make feasts. You can farm stringy loins and meaty haunches, and you can fish up viper fish, but I recommend you buy all three from the auction house instead.

Meaty haunches and stringy loins should be quite cheap, but viper fish can still cost a lot. I recommend setting up an item notification with Trade Skill Master, and buying in bulk when they’re at a good price.

Finally, you’ll need ionized minnows, which are a soulbound fish that can only be found in Mechagon. You do not have to fish these up one by one. Just complete the quest Tidying Up for Danielle Anglers, (you will need the fishing skill to accept the quest – luckily Danielle is also a fishing trainer) and you’ll be able to borrow a minnow vac from her that lets you suck up entire pools of minnows whenever you want. 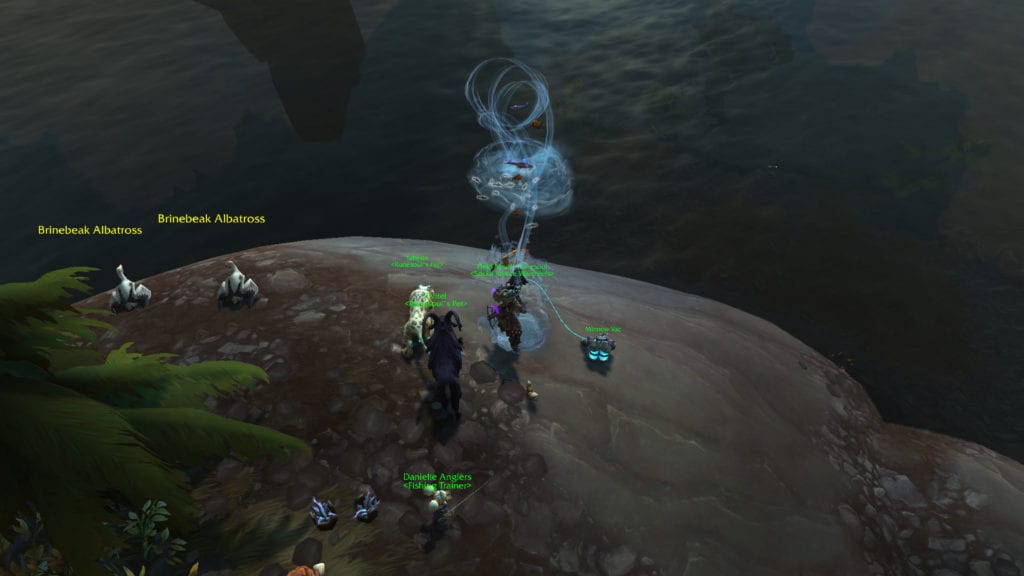 A few notes on this. I like to use the addon Trade Skill Master to make sure I’m not posting anything for too far below its average price.  Prices fluctuate all the time so you do need to be flexible, but you also don’t want to wind up selling your feasts at a fraction of their value.

You might also want to pick your posting times carefully. Generally, a good rule of thumb is to post around the time a lot of people are playing, because that’s when they’ll be buying as well. Raiding days seem particularly good for posting feasts, for obvious reasons.

The proof is in the pudding or, as the case may be, the goodest longest boi that ever did long. Obviously, there are other reasons to want to farm large amounts of gold as well. You might want a certain spider mount worth 2 million gold. You might like the idea of buying store mounts with in-game gold. Or you might just want to fund your hobby with your hobby, by buying WoW time with in-game gold. Either way, there’s no downside. 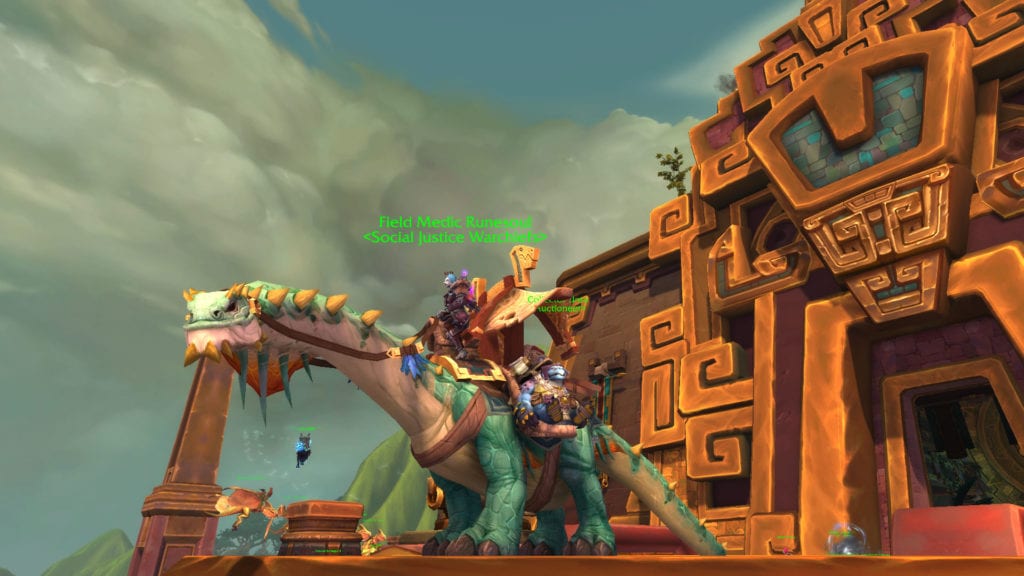