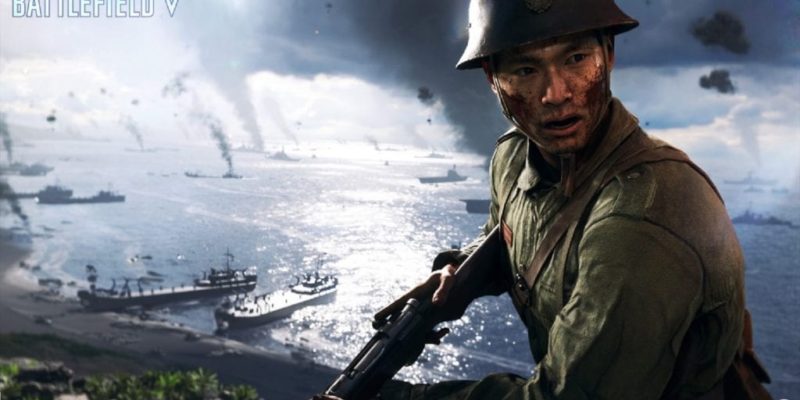 The full reveal for the fifth chapter of Battlefield V‘s Tides of War content updates will make landfall this Wednesday. News of War in the Pacific was last on our radar earlier this year at the EA Play 2019 showcase, where players learned of the new weapons, vehicles, and additional content coming to the game before the end of the decade. The new U.S. and Japan factions will fight it out on three new maps. One of these three is the fan-favorite Iwo Jima, last seen in Battlefield 1943.

Accompanying today’s Twitter announcement for the reveal is a short snippet to hold fans over. The snippet features U.S. Marines making their approach by carrier, possibly hinting at the direction that DICE plans to take Iwo Jima. Viewers can hear the sounds of a fierce battle as soldiers in the background move hastily in preparation. A battle-scarred marine stares off into the distance, steeling himself for battle.

Enter the fray in #Battlefield V’s War in the Pacific.

Iwo Jima has traditionally been a Conquest map, with control points to capture and hold to drain the enemies’ tickets. Battlefield 1942, for instance, put Axis forces in control of Iwo Jima, with the Allies assaulting the island from carriers. Upon reaching the shore, Allies would move to capture the landing beach to give them a foothold on the island. The remaining four control points, meanwhile, continued to be under Axis control. If the Tweeted snippet is anything to go by, Battlefield V may very well look to recreate this experience.

That’s not guaranteed, however. Battlefield 1943 foregoes that asymmetry, with both factions starting on carriers and making their way to the island battleground. We’ll have to wait for the full reveal to see which route Battlefield V takes.

War in the Pacific‘s release in Fall 2019 sits at the end of the Tides of War roadmap. So far, Electronic Arts has released no information regarding Battlefield V and the Battlefield franchise’s future following this foray into the Pacific War.

Diablo IV hinted for BlizzCon again, thanks to Amazon Germany