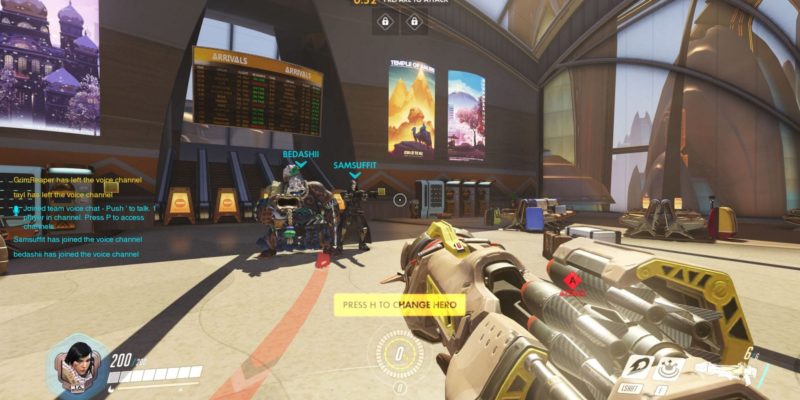 Pharah it is for this match. Here's some other folk that won't say anything in voice chat.

The Overwatch PTR server has only been up for a day and Blizzard has been pouring over the feedback from players.

One of the features Jeff Kaplan discussed in his previous feature overview for Competitive Play was sudden death where two teams would have to play a final match to decide the winner. That is about to change and the alternative option being discussed is a tie. Kaplan explains:

We’ve wrestled with this feature a lot. Our first version of Sudden Death in the beta felt very balanced to us. In that version, we resolved ties by going to a single point on a randomly selected Control map (Ilios, Lijiang Tower, and Nepal). Even though we thought this was a really fair way to resolve ties, we still received a ton of negative feedback on the format from beta participants. What we found was that people didn’t like playing on a different map and they didn’t like that it was a different game mode. So, we tried to come up with a Sudden Death mechanic that would play out on each map that was balanced and not too time intensive for players (i.e. the format you’re playing on the PTR right now).

I think the Sudden Death format we have now is very good, and is actually much more balanced (and I’m looking at real stats here) than players are exaggerating it to be. However, it’s clear that players, at least the vocal ones, are largely not pleased with any form of coin flip or any form of asymmetrical resolution to the maps. We’re very open to changing and tweaking this system, but we’re also realizing that Sudden Death mechanics, in whatever format we might use, all have problems and we may be in a situation where we won’t be able to please the majority of our competitive players.

With that in mind, we’re looking at a variety of different, longer-term solutions that involve removing the coin flip and Sudden Death completely. For example, right now we’re exploring ways to allow for matches that would otherwise result in Sudden Death to instead resolve in a draw where neither team wins or loses. In that situation, our goal would be to make sure the match still felt rewarding for both teams, and that players could walk away feeling like it was time well invested. It’s important to remember that the removal of Sudden Death/the addition of draws would accompany the format changes to Escort and Hybrid maps, which means that draws should be VERY rare overall.

A few quick changes are going to be made before the Summer Season starts with match times for Assault, Escort, and Hybrid maps being reduced from 5 to 4 minutes. The Sudden Death Timer will be also reduced from 2m00s to 1m45s. These changes

The update from Kaplan is quite lengthy and the upshot is that there will be some changes made prior to the Season starting but they want to experiment and keep iterating on Competitive Play and major changes won’t be applied for a few months.