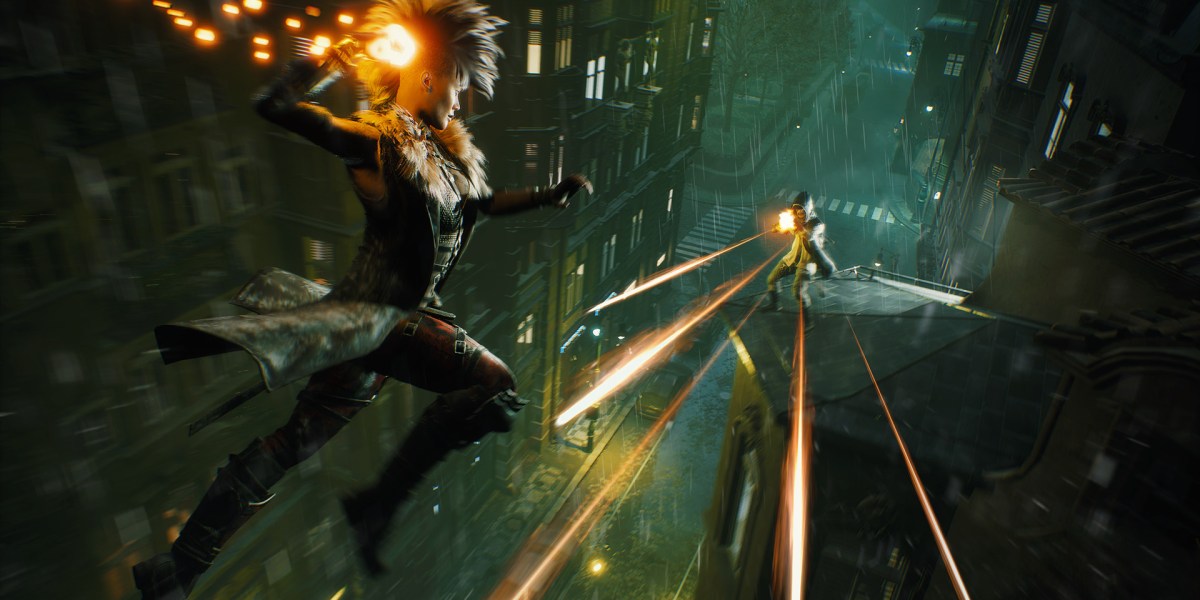 Vampire: The Masquerade – Bloodhunt is the latest contender for your time and attention in the battle royale genre, and it recently entered Steam Early Access. So, anyone can hop in and give it a try. Not all the features are available yet, but there’s more than enough there to give you a feel for the gameplay. I’ve been hunting the dimly lit streets to gather impressions of Bloodhunt for a preview.

Bloodhunt is set in the World of Darkness, which anyone who has played the previous Vampire: The Masquerade games will be familiar with. The battle royale takes place in the streets and on the rooftops of Prague. The eerie supernatural feel of the world, mostly conveyed by the lighting, and the gothic buildings lining the streets work very well together. You feel like you’re in a world like ours, but where monsters could be looking in the shadows. And they are. You’re one of them.

I’m usually not a fan of third-person shooters. I never took to Fortnite, but that was more because of the building than the gunplay. However, I did  fall in love with Spellbreak. I think third-person shooters are best when they forgo reality, when the camera point of view lets you see around corners and over obstacles. I don’t enjoy a game trying to feel realistic, and Bloodhunt doesn’t. The third-person camera, extreme verticality of the map, and abilities all work very well in this instance.

The weight of your character’s movement is smooth and feels just right for a vampire with supernatural strength. Leaping between rooftops and high above the streets is pure joy. And it makes you feel like an alpha hunter ruling over the city below.

Bloodhunt lets you choose between six Archetypes (classes). Each one is a different breed of vampire that has a different special ability and passive. You then get a second ability from the Clan your Archetype belongs to. There are three Clans with two Archetypes in each. Clan abilities enhance your movement. There’s a big leap, short invisibility, and a teleport. The Archetype abilities allow you to perform knockbacks, blinds, track enemies, heal, and so on.

The three Clans are the Brujah, Nosferatu, and Toreador. The Brujah are your strong, powerhouse types. The Nosferatu are hunters. And the Toreador are the glamorous ones. Each clan has a distinct look, and you can customize the look of your Archetypes. I enjoy having control over my character’s appearance. Particularly, when one of my pursuits in a game is new cosmetics.

I do think Sharkmob needs to rebalance the Archetypes, because I found the Toreador Siren and Nosferatu Prowler to be by far the strongest. Their Clan movement abilities allow them to break line of sight and escape a bad situation far better than the leap of the Brujah. The Siren has a blind that will give you a ridiculous advantage in a fight, and the Prowler can constantly use its ability to scan for enemies. Plus, its passive allows you to easily hunt down low-health enemies trying to run away.

The power of the Siren.

If I were to create a class tier list from my Bloodhunt preview, the Siren would be at the top with the Prowler lagging behind. Then the rest would be far behind those two. The Toreador’s Muse is very good in squads, because it can heal your entire team. But the other Archetypes need some work. More options would also create more variety in playstyles. I believe another Clan is coming with the full release towards the end of the year.

The rules of engagement

A Bloodhunt match plays out on two levels — the streets and the rooftops. The verticality of the map can make it difficult to finish off foes, but I do like the way it’s done. You feel like the vampire war is raging on the rooftops above the human world. The vampires drop to the streets to loot and feed on humans before scaling walls in a few seconds to return to the rooftops.

You can climb everything in Bloodhunt. And you should. The high ground gives you a big advantage. I always felt vulnerable when I was running around at street level. I’d constantly glance up at the many rooftops around me, straining my eyes to see an enemy head peeking over.

It’s very easy to get third partied in Bloodhunt because sound travels in the city. Plus, if you jump on a car, you’ll set off its alarm and draw enemies from all over. Killing or using your powers in front of a human will also reveal you to the whole map — this is a Bloodhunt. So, positioning and movement are incredibly important. If you pick defensible roof spots and plan your attack routes well, you’ll be very difficult to kill.

One thing I really like is that abilities will not win you fights. The Siren’s blind might be the only exception here. They will help you stay alive, and they’ll help you get the drop on your enemies. But if you can’t shoot straight, you’ll lose. However, sometimes shooting straight is out of your control because Bloodhunt has bullet bloom. Recoil is a superior mechanic in my opinion, because players can improve by learning to control sprays. Bloom is more random.

Witness the pain of bloom.

Bloodhunt has a comfortable pace at the beginning of a match. Of the 50 or so matches I played, I never died without a gun in my hand. You can start surrounded by enemies all trying to scrounge the high-tier loot, or you can head to a more secluded spot and ensure you get decent gear before battling. Either way, there’s a lot of action early on.

The pace slows down considerably in the mid-game. A few things contributed to this. Players die off quickly in the beginning. So, the playing space might be a bit too large for the number of players left. Third-person shooters also often produce more passive players. Hiding behind objects and using the elevated camera to scan for enemies just makes sense as a tactic. Plus, it’s very easy to hide from enemies in Bloodhunt, except the Prowler, and sticking to a defensible rooftop is the best tactic for survival. I think Sharkmob needs to look at these factors and try to create more engagements in the mid-game.

Tracking with the Prowler makes hunting enemies a lot easier.

I enjoyed solos a lot more than squads. All the frustrations I had finishing off enemies and not being able to find battles in the mid-game were exacerbated by there being teams instead of 45 solo players. Squads was also too chaotic for my liking. However, it does present a much better opportunity to build more powerful teams from the various Archetypes. That will be a lot of fun when there are more classes available in-game.

Bloodhunt is enjoyable. It’s just unique enough to separate itself from all the other battle royales out there. I don’t like bloom as a weapon mechanic, and I think the Archetypes need some rebalancing. However, the gameplay is engaging and the movement is a lot of fun. The unique mechanics, like feeding on humans to heal and gain more power, and the gas closing in different shapes feel fresh. I also like the blend of old and new that the Old Town of Prague has.

I don’t think Bloodhunt has the longevity of Apex Legends or Fortnite. But it’s free, so it won’t cost you anything to give it a try. You won’t regret a few hours spent in the guise of a vampire. I think you’ll quite enjoy your time in Bloodhunt. But then you’ll inevitably return to your battle royale or shooter of choice.

I can’t end this Bloodhunt preview without mentioning the design of the menus. Navigating them is a nightmare that gave me flashbacks to the terrible PUBG UI. Sharkmob, please get a UX designer in to improve these.