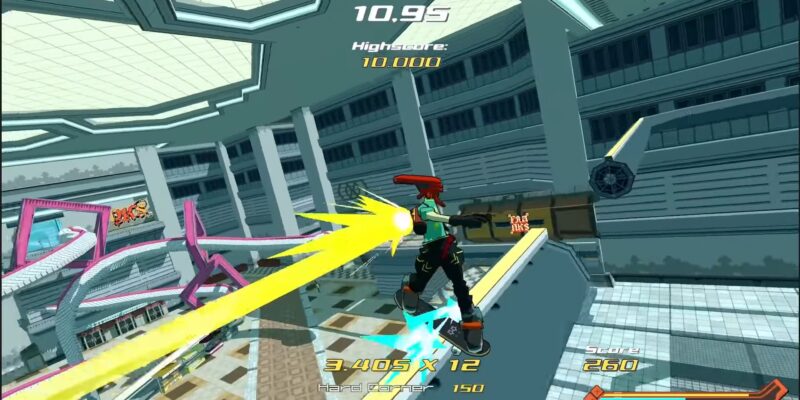 At first glance, Bomb Rush Cyberpunk is nearly indistinguishable from Jet Set Radio, the game it aspires to ape. That line, however, will be blurred even more after you check out its latest gameplay trailer covering the game’s stylish movement. Notably, I’m referring to the fact that you don’t just traverse the game’s world on foot. Oh, no. Movement in Bomb Rush Cyberfunk ranges from sneakers, to skateboards, BMX bikes, and, naturally, inline skates. I mean, what kind of spiritual successor to Jet Set Radio wouldn’t have skates?

Clearly, not this particular spiritual successor. The ‘movestyle teaser’ trailer for the game shows off a plethora of options. It starts off with a character on foot, pausing for just a moment to do some impressive flips. Hitting the rail, he pulls a skateboard from the funk dimension and continues on, grinding and pulling off tricks. Next up, we see a new character riding on a BMX bike, showing off his skills while flying through the air. Finally, another character slides in on inline skates. And I swear, the moves she pulls off gave me strong Jet Set nostalgia.

The trailer shows off just how smooth the movement is in Bomb Rush Cyberfunk. Even though the game will feature various modes of travel, the animation is polished and the tricks look fun to pull off. For those who have been waiting for Sega to return to the world of Tokyo-to, Bomb Rush might just be able to scratch that itch. Having Jet Set‘s original composer, Hideki Naganuma, on the team certainly doesn’t hurt the game’s chances.

Pulling off stylish tricks does provide you more than just points. According to the game director, Dion Koster, earning points through combo tricks can unlock secrets in the stage. Koster wasn’t forthcoming with what kind of secrets. But I am now curious, as finding hidden goodies as rewards for skill can be a good incentive for showing off.

“Style is not only about appearance,” Koster writes in video description. “Many secrets can be found by getting points and doing combos throughout the stage. You will be outstyling the other crews after you bombed their turf to take what’s theirs. Skateboarding, inline and BMX are represented with real life tricks to play into this. After going off you’ll be able to switch back to regular ol’ feet anytime you want to get down to the beat.”

Check out the movement and style (movestyle, I suppose) trailer for Bomb Rush Cyberfunk above. The game will grind onto PC later this year.