The Witcher 3: Wild Hunt was an incredibly impressive game in all regards when it came out in 2015. Back then, even the beefiest of systems struggled to run it at max settings. A little over four years later, however, technology has caught up and left Witcher 3‘s graphics behind.

The Witcher 3 HD Reworked Project aims to correct for that. This ambitious mod, created by Nexus user Halk Hogan, sets out to revamp all the textures in the game, bringing the modern classic into the 4k age. Most of the textures improved here have had their quality doubled from their original level of detail.

The results are extremely impressive. As the preview video shows, the mod takes the older textures and dramatically increases their sharpness. Halk’s mission to improve all the visuals in the game is lofty, but it’s hard to argue with the results. Old, murky textures are brought to full detail without changing the original intent or feel. Beyond just improving environmental textures, this mod also targets The Witcher 3‘s character models. The improvements there are easy to see, especially in NPC armors. 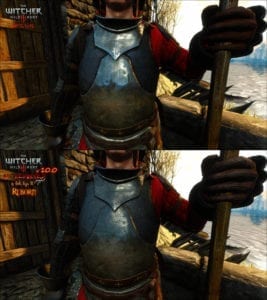 Most impressive of all is the claim that these improvements should have little to no impact on performance. The mod author states that using anything from a GTX 970/AMD R9 290X up should result in no hit to performance. He claims that, at max, you could see up to a 5fps drop in some areas, but that seems well worth it considering the upgrade in visual fidelity.

The HD Reworked Mod really highlights one of the biggest benefits of PC gaming: that older games can have new life breathed into them through mods. With this, The Witcher 3 looks better than ever and appears perfectly at home on modern systems.

If you’re like me and still need to finish up any part of The Witcher 3, or if you’re preparing to play through it again,  or if you’re installing it for the very first time, this might just be an essential download. The mod is currently on its 10th revision and can be easily downloaded and installed from The Nexus.

Control hands-on impressions: When things grow out of control