Destiny 2: Forsaken won’t be out until September 4, fans are eagerly anticipating what promises to be a gamechanger for the franchise. Bungie, who have faced criticism due to their handling of the sequel, provided an updated Development Roadmap for Destiny 2. There will be some big changes with Update 2.0.0 even before Forsaken releases.

As you can see below, Destiny 2 players will see updates for Milestones and Challenges as well as new Heroic missions. However, you’ll also notice some of the bigger changes in store such as a revamping of the weapon slot system. 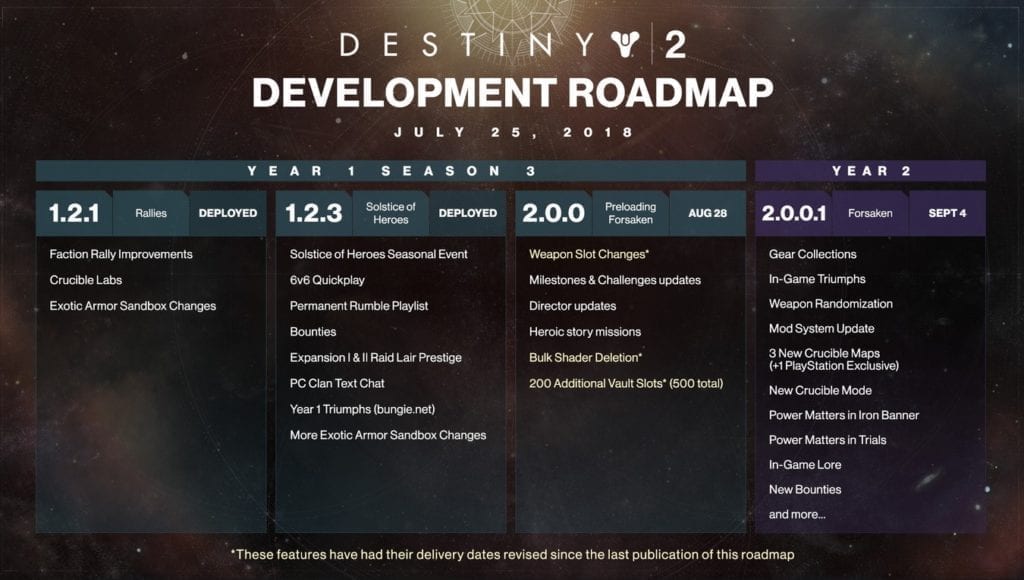 Currently, weapons are divided into kinetic, energy, and power slots. Back in Destiny 1, certain weapons such as shotguns, fusion rifles, and sniper rifles used to be in the energy/secondary slot. Bungie then decided to have these weapons in the power slot for Destiny 2. Naturally, that led to complaints from players. In many cases, you had no use for certain weapons barring a few select instances.

The weapon slot rework promises to change all that. A previous commentary from the developers even suggested shotguns as equippable for all three slots. That’s certainly going to be a sight to behold, and a brutal experience in the Crucible if you’re on the receiving end.

The development roadmap also tells us that bulk deletion of shaders will finally be implemented. It’s a feature that many players have been asking for, given how annoying it is to delete 800 Atlantis Wash shaders one by one. Likewise, a highly-requested addition: more vault space, will be introduced. Guardians will be able to store up to 500 items in their vaults now. Thank goodness because we’ve been running out of space!

Update 2.0.0 will go live on August 28, a week before the Forsaken expansion. It looks like it’s available for all Destiny 2 players even if they don’t buy Forsaken as well.