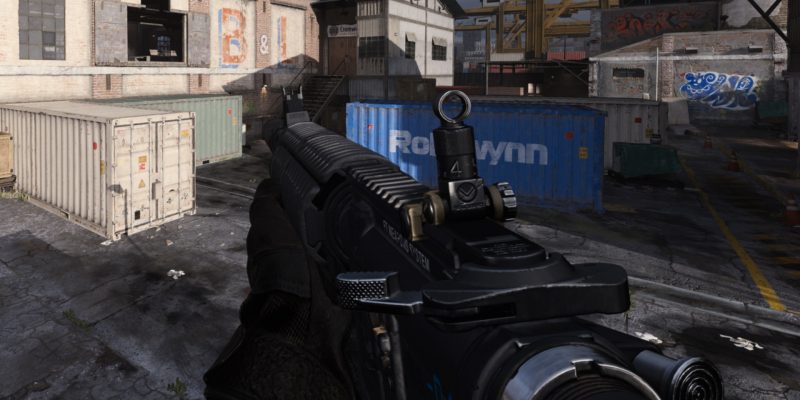 The M4A1 was the first meta weapon in Call of Duty: Warzone history. Before even the Grau 5.56 became popular, it was the M4 that most players were using. It dominated the early days of Call of Duty: Warzone, but has since been replaced by several other guns. A series of nerfs and various updates have caused the M4A1 to fall prey to power creep.

But even if it isn’t the dominant force it once was, the M4A1 is still good. Despite the six seasons of new content we’ve received, it holds its own against the current meta rifles better than expected. When built right, the M4A1 has the potential to be one of the most consistent weapons in Call of Duty: Warzone.

The M4A1 is a jack of all trades assault rifle. Despite having no outstanding traits, it performs well in the majority of important stats. Furthermore, it comes default with a great set of iron sights. This saves an attachment slot to optimize its build elsewhere.

The M4A1’s closest competition is probably the Grau 5.56. Both the Grau and M4A1 have fantastic iron sights and are on the more manageable side of recoil. However, the M4A1 does kill faster than the Grau thanks to both its superior damage per shot and slightly better range values. Therefore between the Grau and M4A1, I would say the latter is the better gun in Call of Duty: Warzone. 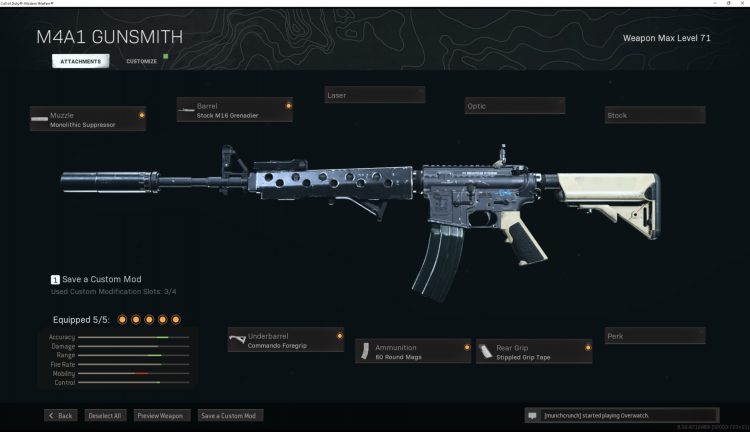 The M4A1’s recoil is not particularly difficult to control, but Warzone has always been a game that favors accuracy. As such, there’s no harm in improving the recoil control further. The best attachment for this is the M4A1’s unique barrel, Stock M16 Grenadier. As its name suggests, it’s borrowed from the M16 and provides the largest reduction to vertical recoil of any available attachment by far.

To partner with the M16 barrel, you’ll also want to use a Commando Foregrip. While the Stock M16 Grenadier controls vertical kick, the Commando Foregrip keeps any side-to-side bounce in check. Horizontal recoil is difficult to control even for skilled first-person shooter players, so this attachment is vital. 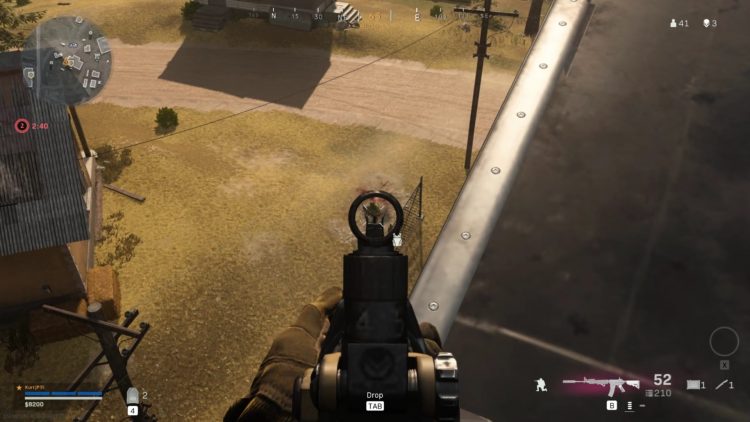 The Monolithic Suppressor serves two primary purposes on this Call of Duty: Warzone M4A1 build. As you’d expect, it keeps you off the radar when firing. This should help to avoid attracting unnecessary attention. But also the Monolithic Suppressor gives a hidden boost to bullet velocity. When stacked with the improvement already provided by the Stock M16 Grenadier, the M4A1 can feel almost like it has hitscan.

Both the 50 Round Mags and 60 Round Mags both have similar downsides. It’s best to opt for the larger magazine on the M4A1 to improve our theoretical output. However, all of these heavy attachments weigh down the M4A1, so some kind of handling improvement is needed. I like the Stippled Grip Tape, as it cuts down both aim down sights time and sprint out time. However, the Tac Laser is a good alternative for players who don’t mind the visible laser it outputs.

These attachments will make your M4A1 build a solid contender in the Verdansk warzone. For more Call of Duty: Warzone tips and guides, be sure to hit up our guides and features hub.