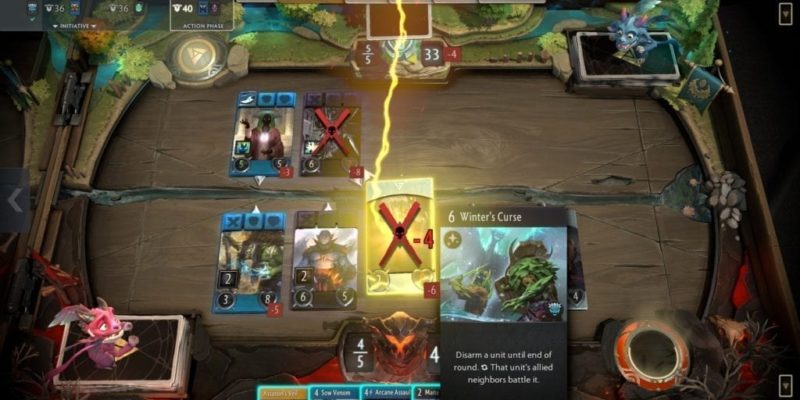 There’s been a bit of a hoo-ha surrounding Artifact, Valve’s Dota 2-themed CCG. The primary source of contention is this: the game costs money. Like, actual up-front money.

Unlike most of its competitors in the online CCG world, you have to pay a flat fee to get access to Artifact – $19.99 USD, specifically – and then you have to buy booster packs on top of that. That $19.99 gets you access to the game itself, two free (and fairly basic) decks, ten booster packs, and five event tickets which let you take on the game’s Expert Play modes.

These Expert Play modes are also the only way to “earn” new cards in the game. Much like Hearthstone‘s Arena mode, these are gauntlets demanding you get successive victories. Any given run ends at either five wins or two losses, and once you hit three wins, you start getting rewards in the form of more event tickets and – eventually – more booster packs. 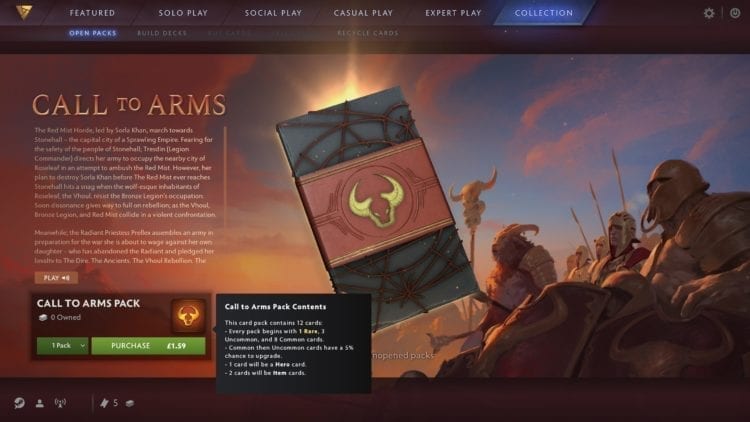 No discount for buying multiple packs at a time, alas. Maybe in the future.

Of course, all of this stuff can also be purchased in-game. Booster packs of 12 cards cost around $2 each, while Event Tickets can be purchased in bundles of 5 for around $5. So the stuff you get for “free” when you buy Artifact totals about $25, and that’s not including the pair of starter decks you receive. Each of those contains around 40 cards, so even if you don’t use them (and they’re not great) that’s arguably another $7 or so.

In short, when you buy Artifact, you’re getting stuff worth about $35 going by the in-game shop.

But You Can’t Get Packs For Free 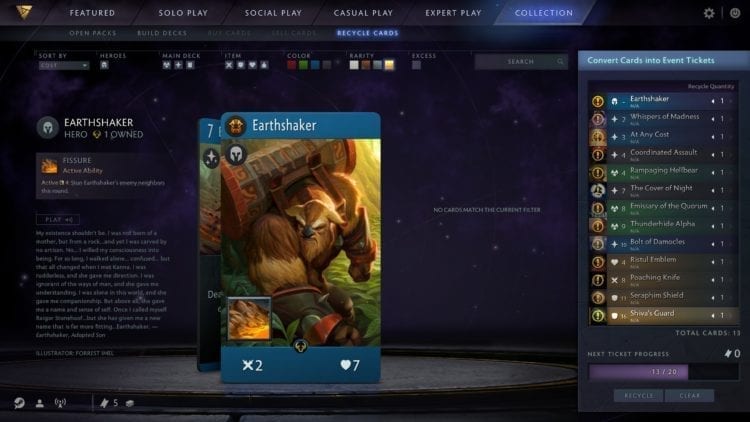 Recycling, unfortunately, doesn’t take the rarity of cards into account. My 13 rare cards still recycle for the same cost as my commons.

It is, however, true that there’s no in-game currency or questing or any other way to grind out more packs or cards. There are three ways to get additional cards: buy booster packs, win in Expert Play, or go to the Steam Marketplace. Every single one of these costs money.

You can recycle duplicate cards (or even non-duplicates) into event tickets, but right now, it’s 20 cards for one event ticket. Note that rarity has no impact on this: they can be the most common of cards or they can be rares, but either way, they only count as one card.

It’s very, very hard to judge what card prices are going to be like on the Steam Marketplace. Super rare stuff is always going to be costly on the Steam Marketplace, but with enough people playing Artifact (and buying booster packs, getting duplicate cards, selling them…) I doubt most cards are going to be too through-the-roof in terms of pricing. The first few days will be volatile, but after a few weeks, I suspect the more common cards will be around (or below) the $0.05 range. Heroes and rare cards are harder to judge, and I will probably look like a fool, but I suspect they’ll stabilize around the $0.20 range with a few outliers for particularly strong cards.

And, y’know, new game and new systems. There’ll likely be changes across the board over the coming weeks and months.

Something else worth noting (and a change that was made in an earlier beta build) is that, initially, you could basically only do the tutorial before you couldn’t request a refund from Steam. The usual “two hour grace period” still applies, but the instant you claimed your booster packs and event tickets, you were locked out of refunds. Not too surprising considering the random nature of what you’ll get, plus the Marketplace selling.

That has since changed, thankfully. Right now you can play bot matches and the Call to Arms game mode without claiming your starter pack, so you can actually experience a bit more and see what you think before reaching the point of no return.

But You Still Have To Pay, Right? 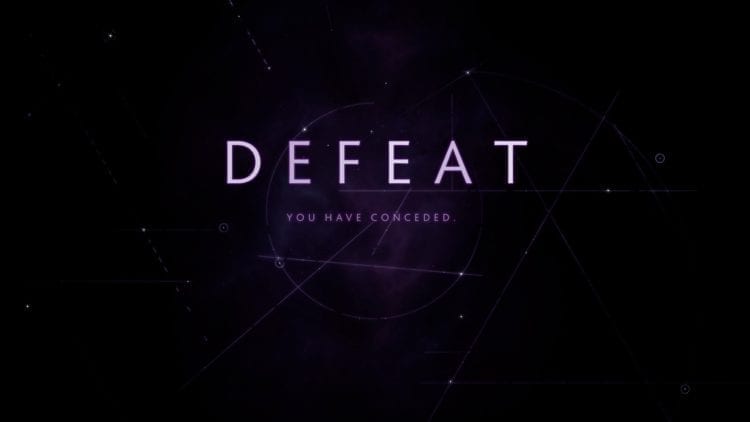 This is how I tend to feel after I buy cards.

Yes and no. If you want to play Constructed (where you assemble cards from the decks you own) then, yes, money is definitely going to be an issue. Hopefully, with the Steam Marketplace, it’ll be less of an issue than trying to get that one Legendary you need for Hearthstone. Practically speaking, there’s no way you can eventually grind out a huge card collection as with most free-to-play CCGs. But hopefully, getting only the cards you need won’t be too costly.

What Are The Modes You Have To Pay For? 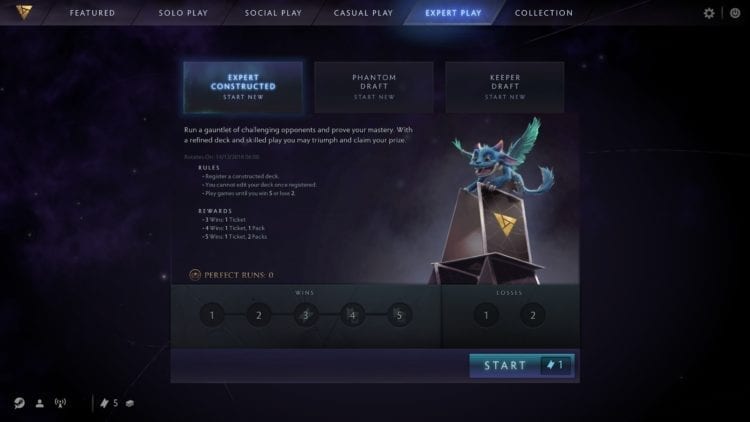 All three of these are the aforementioned gauntlet modes. You pay an event ticket, then play until you win five games or lose two.

Phantom Draft has you draft 60 cards from five booster packs and build a deck of out of them, with the ability to edit your deck before any match. This has the same event ticket cost and reward payout as Expert Constructed.

It’s worth noting that all of these game modes (plus ones I’m going to talk about shortly) are listed as due to rotate on December 14. I’m assuming this means they’ll be replaced by new game modes, but we’ll see how things go.

What Can You Play For Free? 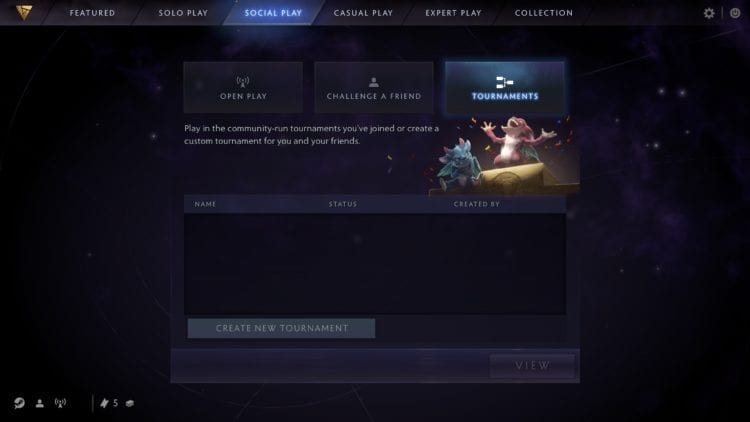 Quite a lot, actually. You can challenge friends to matches or play against bots with constructed decks, but there’s also the featured game mode and the Casual Play modes.

Right now, the Featured Event is Call to Arms. This has six pre-made decks on offer, and it challenges you to rack up the highest win streak you can against other players using those same six decks. You don’t need to own those decks or pay anything to play this mode. This, again, is due to rotate out on December 14. If you want to liken this to Hearthstone‘s Tavern Brawl, we may end up with a Diretide (Dota 2‘s Christmas) themed event, or possibly a few new cards and decks. That’s speculation, though.

Casual Play, like Expert Play, has three modes. Global Matchmaking is kind of the “default” play mode: use one of your constructed decks and be matched up against a player of a similar skill level. So yes, you need to own cards for that. 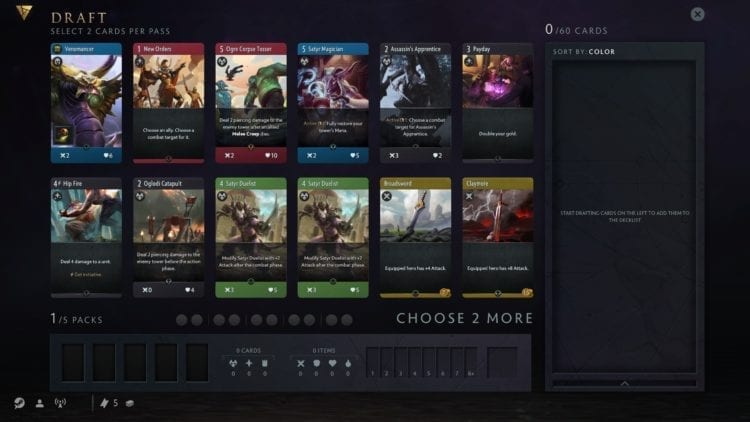 Phantom Draft doesn’t give you the satisfaction of getting a load of cards, but it does leave you praying for the ones you really need to fill out your deck. Building a deck in this mode is as tense as it is fun.

The other two Casual Play modes are gauntlets, but without an entry cost and without rewards. Casual Constructed is “win two or lose two” again, using your constructed decks. Finally, Casual Phantom Draft is the same as the Expert Play Phantom Draft (draft 60 cards, build a deck out of them) but, again, without entry fees or rewards.

And here’s the thing: I’ve spent most of my time in Artifact playing Casual Phantom Draft. It’s a really, really fun game mode, giving me leeway to try out new cards, test my deck-building skills, and compete, all without having to actually buy any cards. That’s not to say I won’t give the constructed modes a shot, but my favorite mode is completely free.

Alas, it’s also due to rotate out on December 14. I’m rather hoping rotation doesn’t mean it’s going to be outright replaced, because it’s a marvelous little mode. 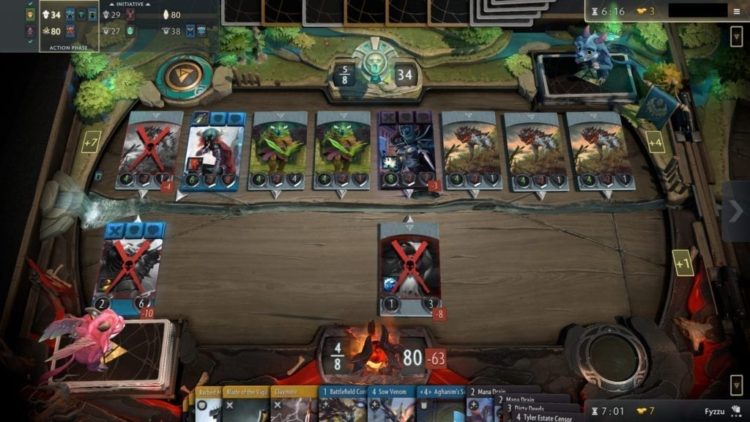 Okay, yes, this is a bad situation. Not going to lie.

Now that, I can’t answer. I’ll admit: the lack of rewards is a little galling. Part of the joy of CCGs is, and has always been, opening up new packs and figuring out how to slot those cards into your decks.

Right now, there are literally no rewards in Artifact except for more cards. As far as I can tell there are no special avatars, art variants, or cosmetics of any sort. It’s purely focused on the gameplay, which is good! But if you’re playing for free (excluding the $20 purchase price) rather than testing your skill in Expert Play, it also means things feel a bit empty compared to most of the other CCG competitors. No daily quests to keep you coming back. No edging slowly towards your next reward. Just the game.

I’m not about to write a full review of Artifact, but if you’ve read both this and my How To Play Artifact piece, you’ll likely have figured out I’ve got a pretty positive opinion. It has a lot of unique features in the CCG world (online CCGs, at least). But there’s a lot of “wait and see.” What will the rotated modes be? How will things evolve over the next month? What are the Steam Marketplace prices going to cap out at?

To answer the question posed in the title: yes, you can play Artifact without microtransactions. I can’t tell you whether or not it’s worth your money. I can tell you that there’s a sizeable amount of content that can be played without having to dip into microtransactions, though, and that I hope the Steam Marketplace prices will be reasonable enough that I can acquire particular cards (although not a full collection) without spending too much.