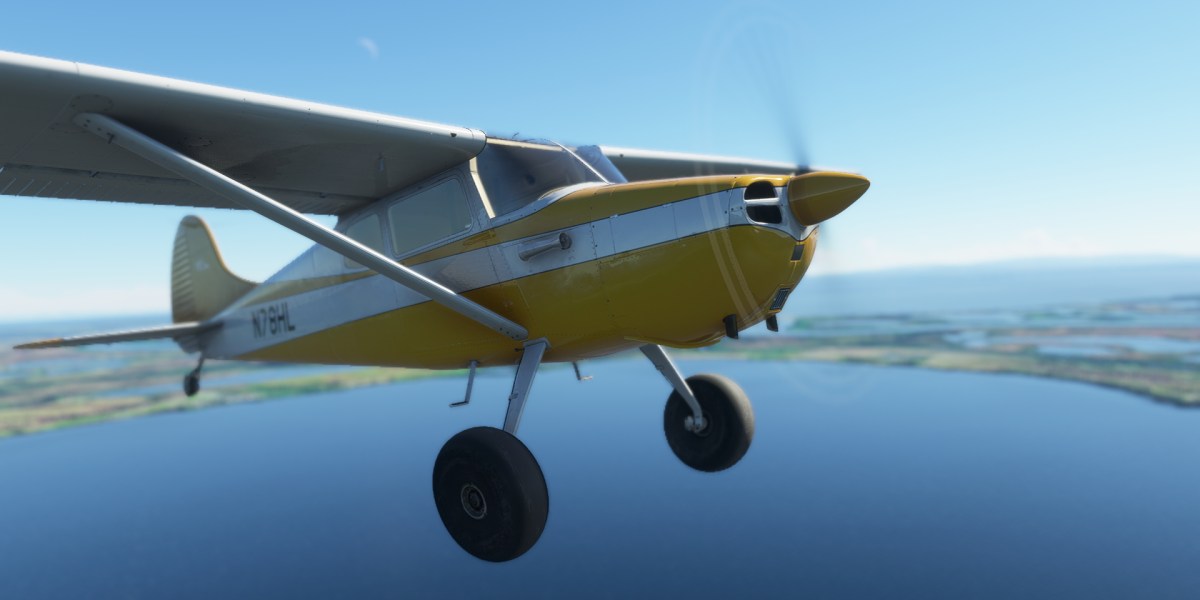 The Carenado C170B for Microsoft Flight Simulator fully embraces the sim’s quest to offer breathtaking views. With the sheer density and scale of the sim’s virtual rendition of planet Earth, it’s no wonder why a lot of its included planes are light, propeller-powered aircraft. They’re meant for easily slipping in and out of small airstrips, and allow pilots to get up close and personal with the scenery around them. But, there are aircraft that take this feat to the next level. They sport wide wings and thick tires, allowing them to land and takeoff from even the shortest patch of land. Called bush planes, Carenado’s new Cessna 170B is most certainly one of ’em.

After spending some time with the C170B around the wildlands of virtual northern Alaska, I can definitely say that it’s right at home here in Microsoft Flight Simulator.

Carenado has made a name for itself over the years by providing very high-quality aircraft that both look, sound, and feel very authentic. The same is true for the new C170B, or rather the old C170B. This single-engine bush plane hails all the way from the 1940s, but you can still find some of them flying around today. I just so happened to be taking a virtual tour of America’s largest state at the same time I acquired this aircraft, and the two fit together like peanut butter and jelly.

What made this experience even more fitting is that Carenado has actually included two variants of the 170B for Microsoft Flight Simulator —  the regular version and the Tundra version. The latter, which I used exclusively for this coverage, outfits the aircraft with wide “bush tires,” thus enabling it to land on rougher terrain like gravel, sand, dirt, and grass. It has a slightly shorter range, but you can still get a decent ways out on a single tank. You just won’t get there very quickly. 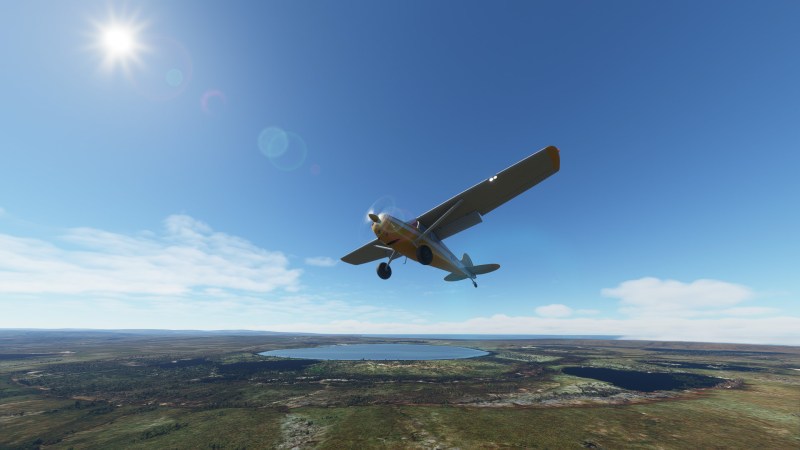 Being an older pane, the piston-engine powered 170B is definitely not winning any races. Its cruising speed of barely over 100 knots is far less than what most modern commercial jets and turboprops land at. But what it lacks in speed, it makes up for with ease of flight.

The C170B is actually considered to be the grandfather of the extremely popular Cessna 172, an aircraft that many novice pilots start their careers in. Similar to the 172, the C170B’s high wing and fixed gear design make it perfect for learning how to maneuver without the anxiety of speed. It’s incredibly stable in flight  and has such a low landing speed that I was able to touch it down mere feet away from a random lake with ease. 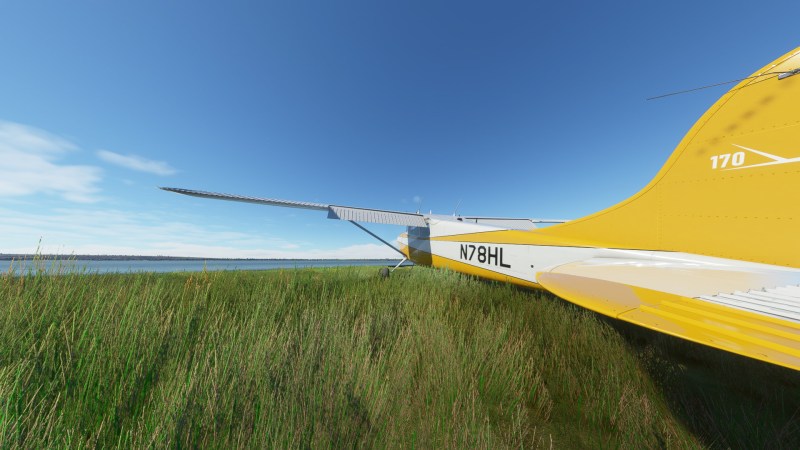 Indeed, the only real drawback to me was its very primitive avionics. Again, this is an old bird, so I wasn’t surprised by the lack of modern amenities. Not even all of the default aircraft have modern cockpits. Nevertheless, it’s really the lack of autopilot that soured me the most.

With Alaska’s large size and the C170B’s leisurely pace, what should be a fairly short flight easily goes over an hour in most cases. With AP being MIA, you have to help the plane along its journey with nudges of the control stick to keep it on course. Trimming the elevators helps keep it at somewhat consistent altitudes, but I found it constantly rolling ever so slightly, especially when Alaska’s notoriously high winds were present.

But really, I can’t call any of these legitimate complaints. Carenado made this rendition of the C170B very true to life and even went as far as to include a handy mini GPS unit. It’s really the most modern thing in the airplane. Limited as the GPS is, it at least makes navigation a lot simpler. Something like that is certainly a necessity in more barren landscapes like Alaska and similar regions.

Carenado’s C170B is the tool for taking it all in

One true oddity that I did notice is that its rudder seems very sensitive. Other taildraggers in the sim, like the default Piper X-Cub, don’t seem to be as twitchy as Carenado’s C170B. Perhaps that’s just a characteristic of the aircraft itself. Though, it could be a small bug that needs to be ironed out. I’m not sure which it is. But I am sure that, considering it’s the only true complaint I have with the C170B, it’s safe to say that the devs have delivered a worthwhile piece of kit yet again. This is also true of its visual complexity. 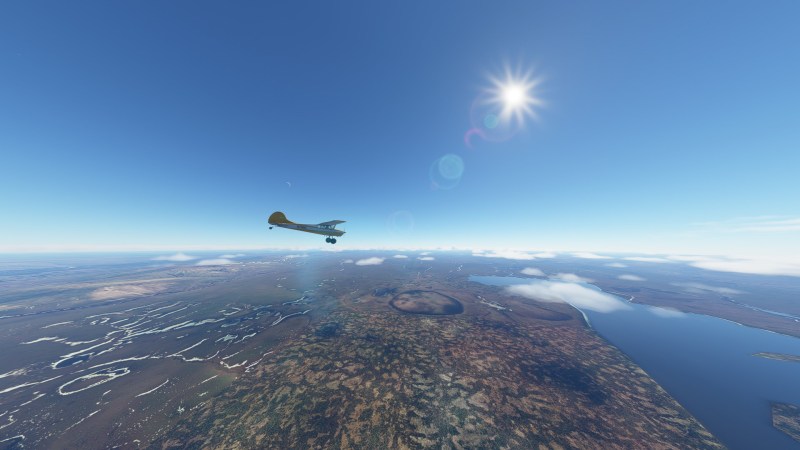 With an airplane that both looks great and prides itself on getting nice and close to the equally beautiful terrain of Alaska, you better believe my screenshot gallery is even more full than before. 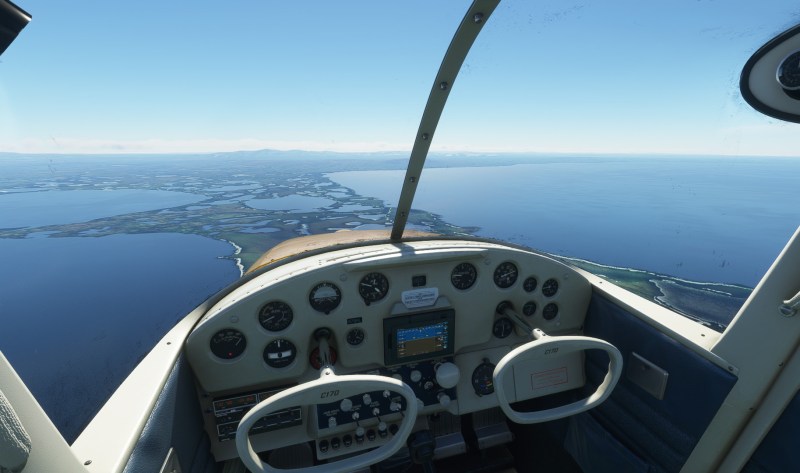 All things considered, it’s clear that Carenado’s C170B is quite a cool plane to use to putter around in Microsoft Flight Simulator. Though, it’s probably still the second most niche add-on aircraft that I’ve taken a look at so far.

This really is a specific use-case kind of flier. Its simplistic profile makes it awesome for a beginner/casual virtual pilot. Either that, or you just enjoy flying low and slow in general. But, for anything more than a photo trip, the lack of autopilot and slow speed might be irritating. Even so, if you want a very hands-on aircraft that allows you to enjoy the breathtaking sights of Microsoft Flight Simulator, then I’d say the Carenado C170B is worth checking out. 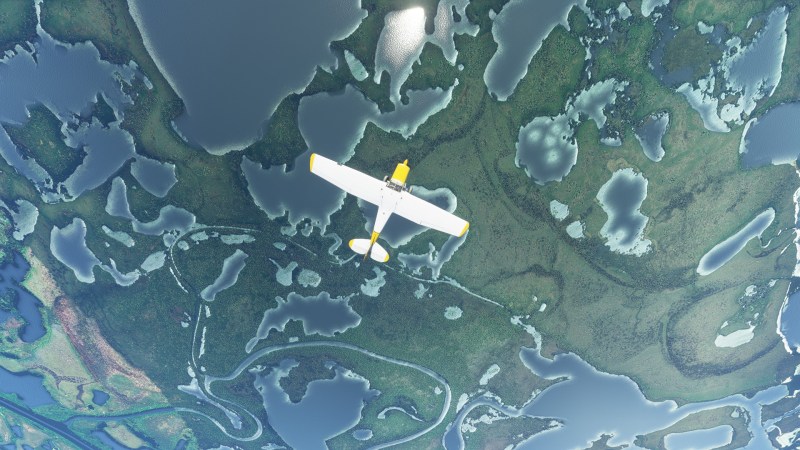 Uncover the mysteries of space Egyptians in Faraday Protocol this August